The gunslinging star of Hell on Wheels offers Anthem a glimpse into his life in New York City. 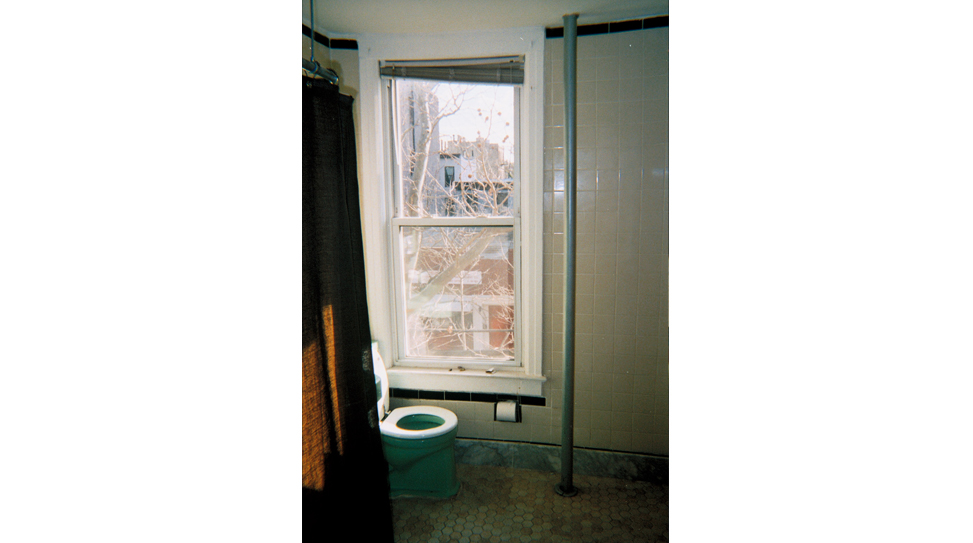 Last but not least, my throne. I absolutely love the window there. I can sit and stare down at people on the street and they have no idea what I'm doing. And you can't beat having a beautiful sweetgum tree outside your bathroom window. Love it.

Again, I'm totally lost and I was probably halfway through a bottle of Woodford Reserve. Sorry about that.

This is one of David Pomes' paintings. Besides being a fantastic writer and director, the guy can paint, huh? Let that be a lesson to all you would-be lawyers. You may have an artist in you yet.

This one looks like a weird alien energy infected someone that was standing here, disintegrated his body and then got trapped in the wall, commemorating the life of the only man who inadvertently made contact with another dimension.

And if there's one rule in New York... (Many meanings behind this one.)

This is my friend Jonathan Meiburg (singer and guitarist of Shearwater) having a plaster cast made of his head by my friend Branan, who shot his most recent music video. This was a long process.

Again, I'm stumped. Clearly I've lost touch with the wild animal that is film photography. I kinda like it though. Straighten that line, turn it 90 degrees and you've got one hell of a Rothko.

This is a wider frame of the type of outdoor wall art I've been talking about. Hopefully you can get a better idea of how this evolves. I love how it's spilled across a padlocked door. You can't keep out art! It'll getcha like a zombie apocalypse.

A tree grows in Brooklyn.

This is Lola Schnabel's most recent exhibit. She's never met me and probably has no idea who I am, but I love Lola's work. It's visceral, angry, contemplative and complex. I love the ultra-chic woman in the foreground.

Ah. This was taken at a sushi bar in the East Village. I was sitting next to three very nice young ladies who, it turned out, had just been to the same art exhibit I had seen (next pic).

I'm stumped. Probably too much whiskey.

This is my windowsill. If you look at the bottom of the frame, you can just make out what I was trying to take a picture of: my high school ring, which I only recently uncovered after 20 years.

This is my friend Branan's hand going over a draft of my most recent screenplay. He's either pointing out something he likes or something he thinks needs work. Can't remember. But I'm very happy that he's going to be directing this.

This is me and director David Pomes on the night we finally released Cook County in theaters. We shot it in 2007, did the festivals in 2008 and then it sat in limbo until the forces of nature decided it was time. Long wait. Much happiness.

Even more wall art. Sometimes wall art will get tagged with band posters and then get removed, leaving a residue of glue and paper. It adds to the overall collage effect. I love it. Sort of an unintentional, communal art.

More wall art. This one of a bird strategically placed below a fuse box. I love the band stickers "Swervewolf" and "The Kosha Dillz". Hilarious names for bands!

One of the things I love about NYC is the random art you'll find on walls. This looks to me like two people who were having sex, got stuck in a trans-dimensional portal and came out looking like this.

This was taken earlier the same night at my favorite NYC dive, Doc Holidays. If you play "Dixieland Delight" on the jukebox, the bartenders are required (by law) to get up on the bar and clogg.

I snapped this with one hand while keeping the other free to make sure that Jenn didn't go over the edge. This is Williamsburg at night. Winter decorations are still up and that's about all you can make out.

This is my friend Grady at the end of a very long, very drunken night. I really admire Grady because he's following his dreams and his heart regardless of what anyone else thinks.

My friend Jenn and I were coming back from a long day of apartment hunting only to find that our train line was down. The platform was terribly crowded and everyone was terribly pissed.

Another pic from my 'hood. There were some old Polish men having an animated conversation. Just as I was about to snap the picture, they looked at me suspiciously. So I lifted the frame. I still think it came out nicely.

This is a relatively new sculpture in Union Square. It's an elephant balancing on his trunk. I think he has a kind of yogic zen.

This is the best taco truck in Williamsburg (or anywhere in the city in my opinion). Not only do they have great tacos and tostadas, but the people who work here are always smiling.

I snapped this while walking through Midtown East with my friend Jeffrey. What would have people thought a hundred years ago if they overheard someone say, "The building was reflecting the sky"?

This is a typical day in my 'hood. Jackhammers, sun streaking the fire escapes and a wide diversity of things happening on the street. I like the young man in the foreground. He looks like he has a diabolical plan. 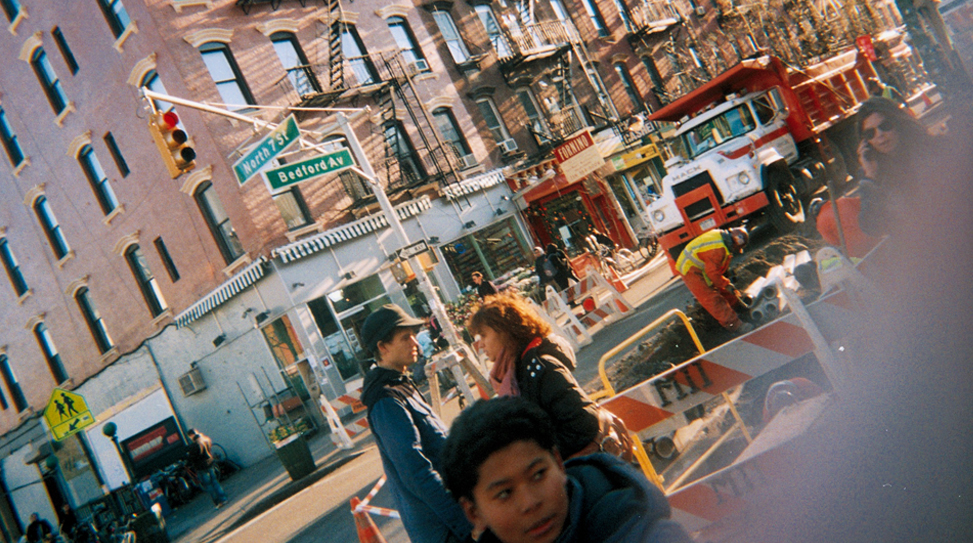 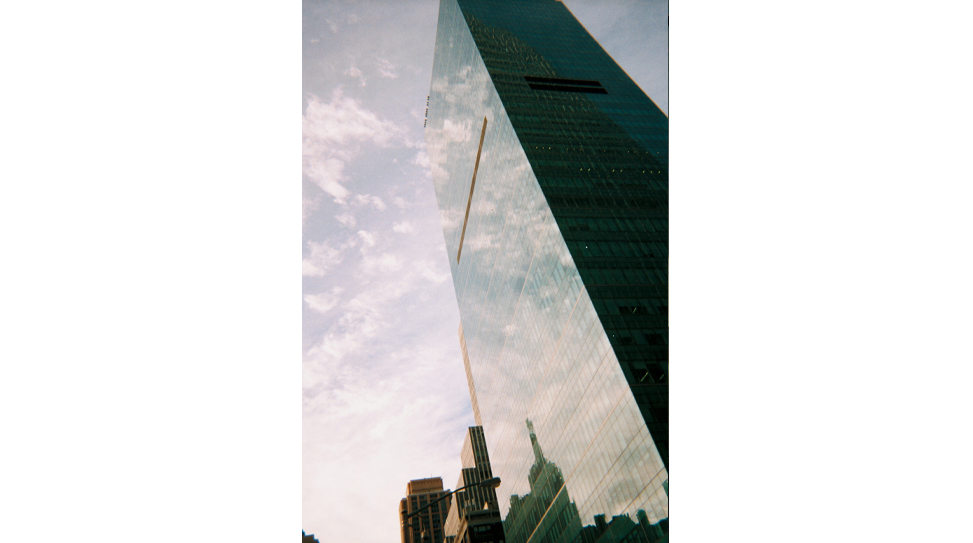 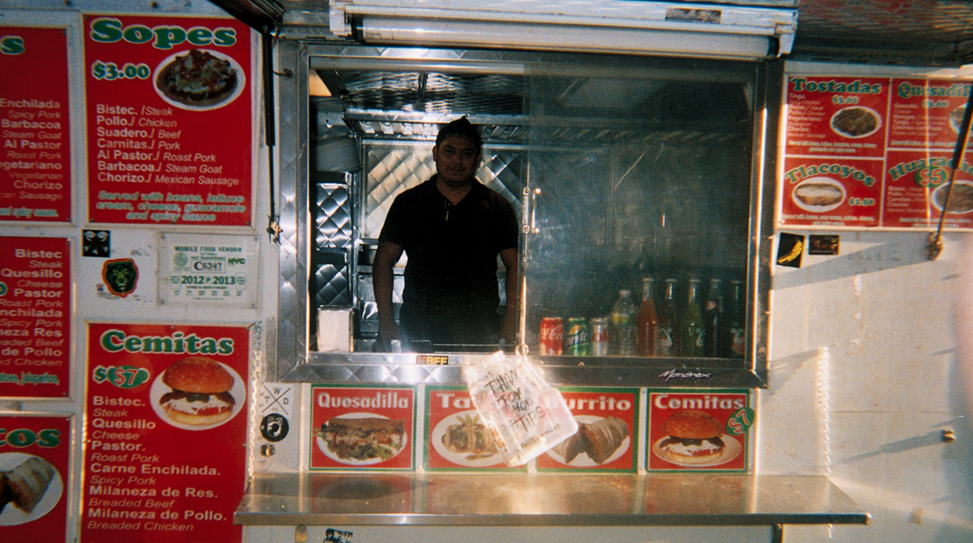 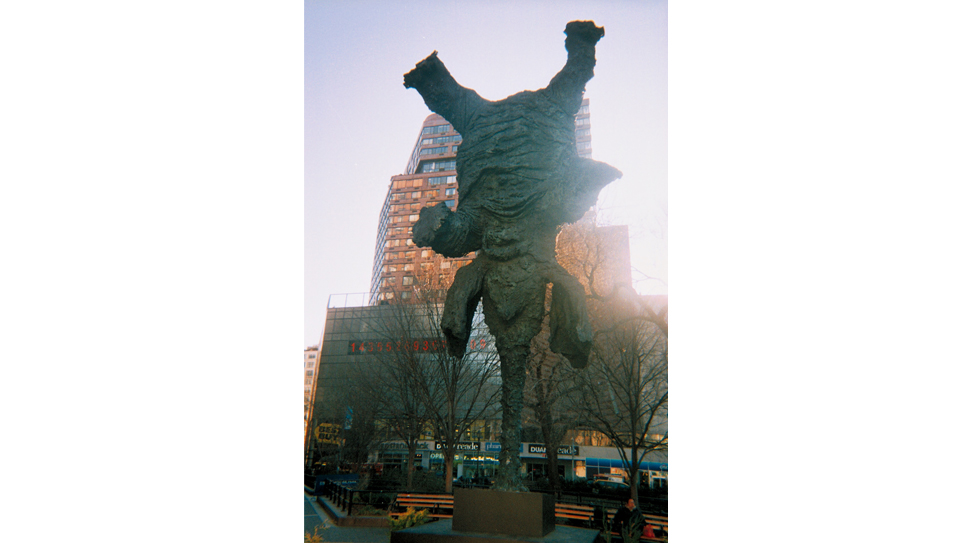 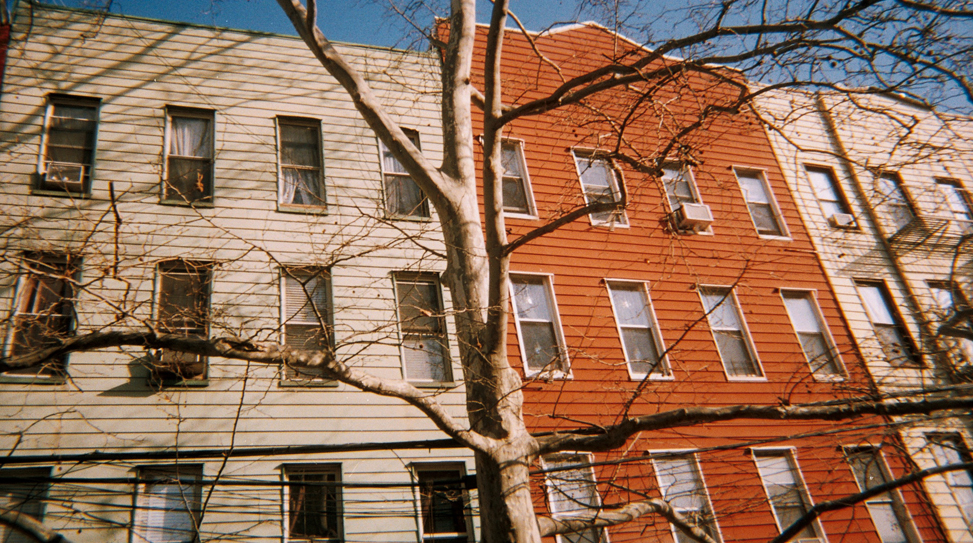 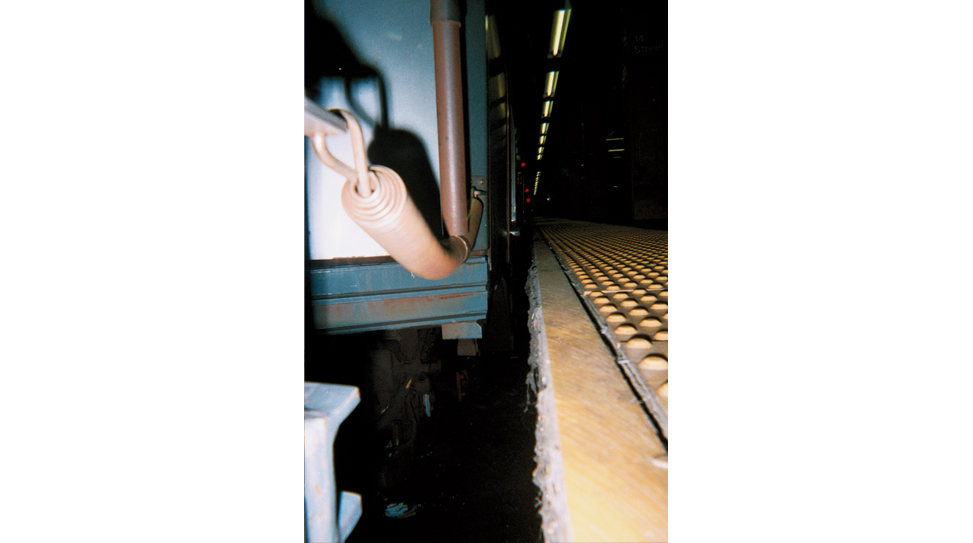 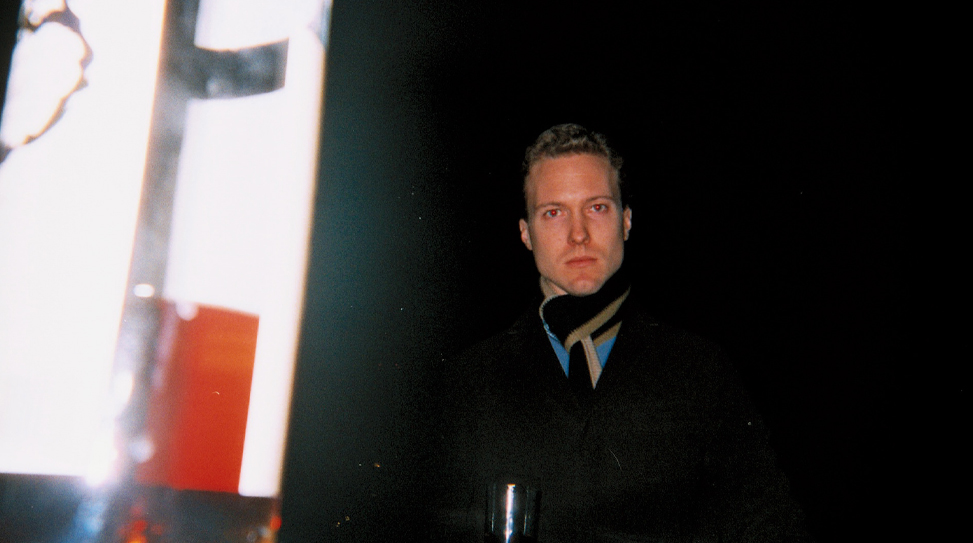 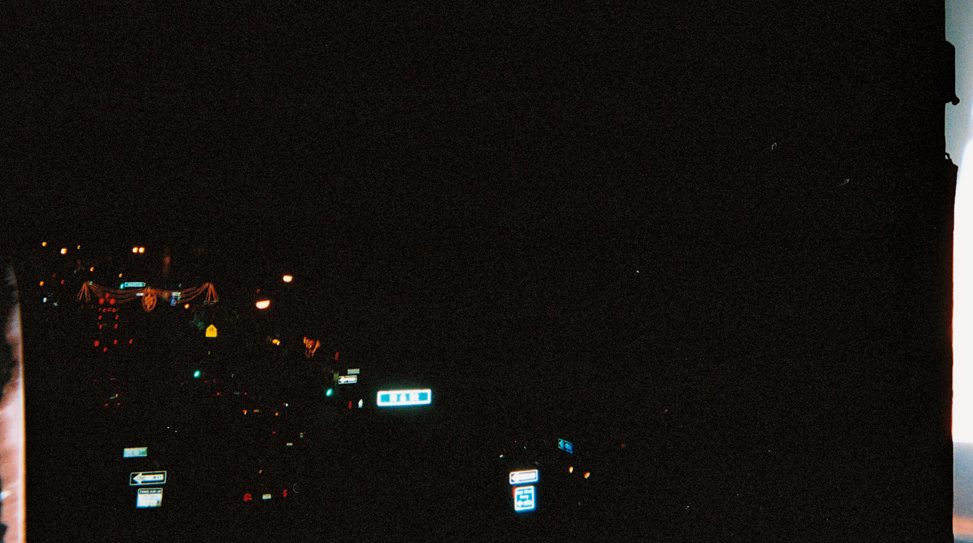 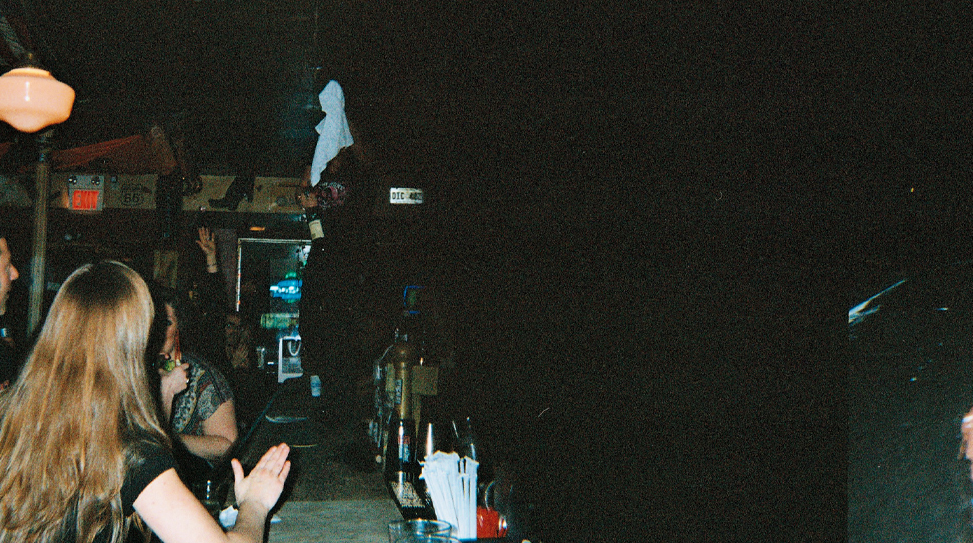 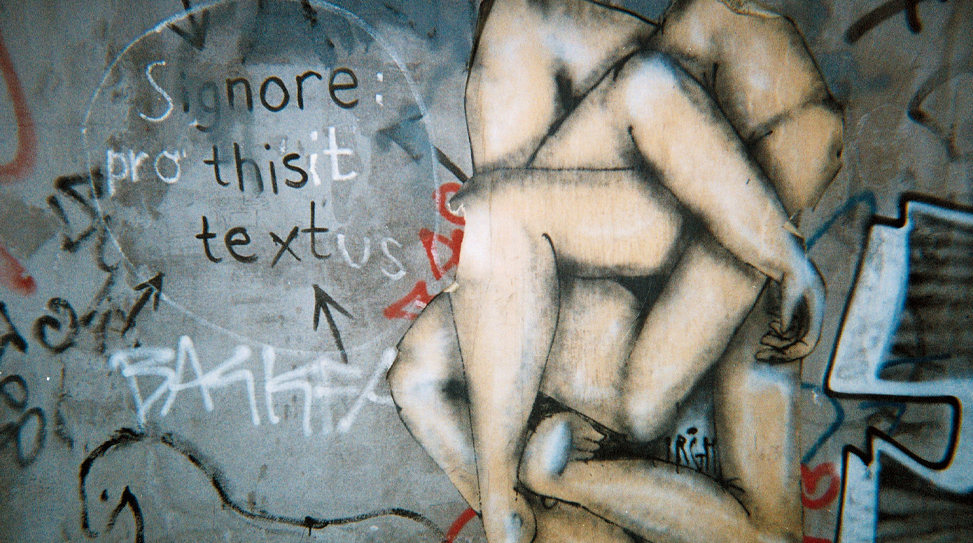 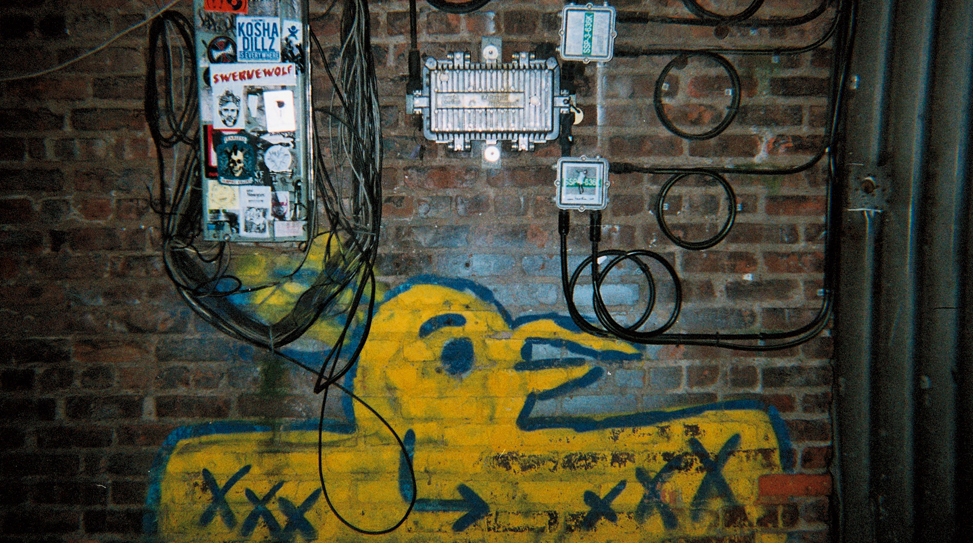 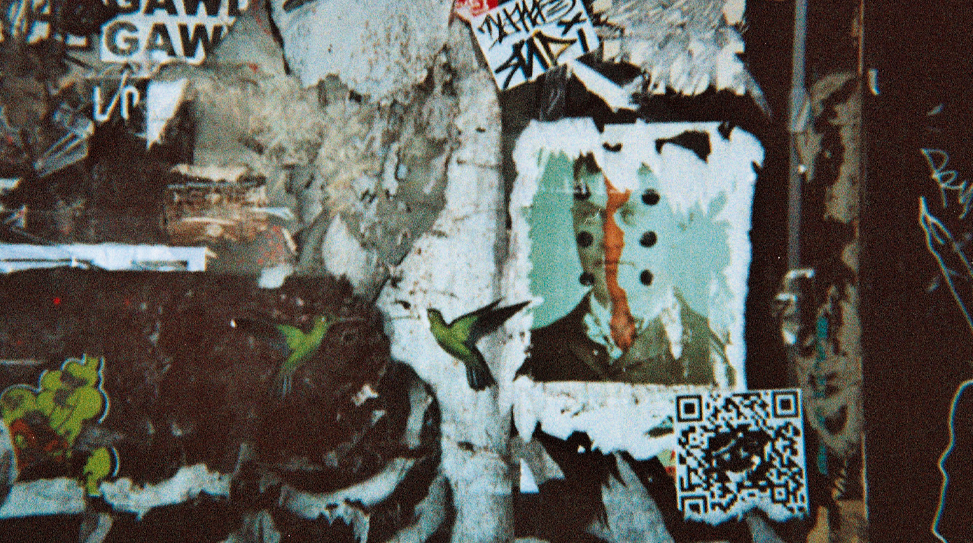 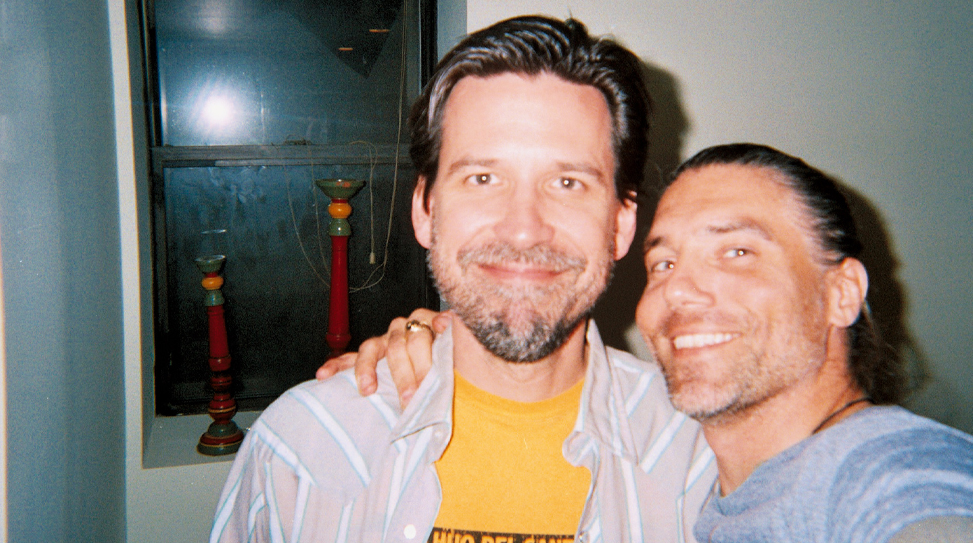 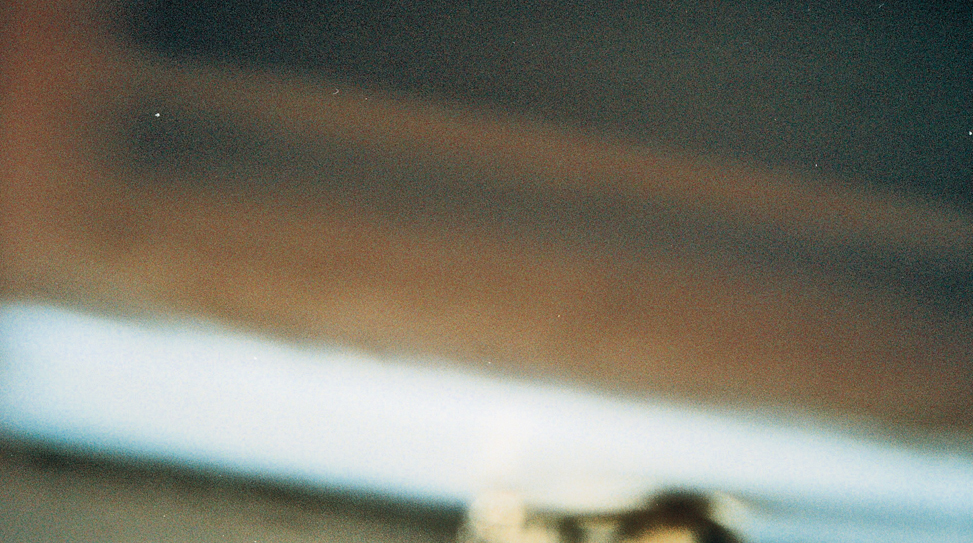 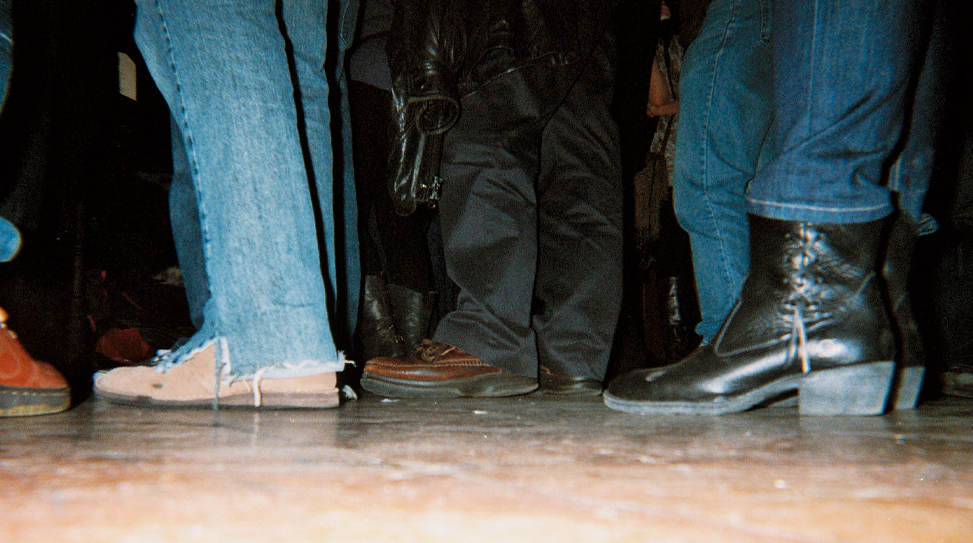 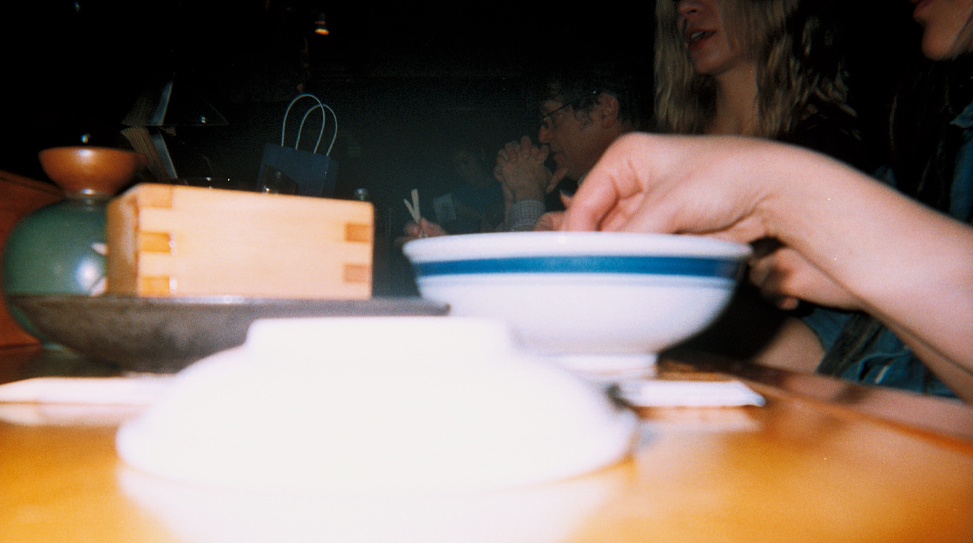 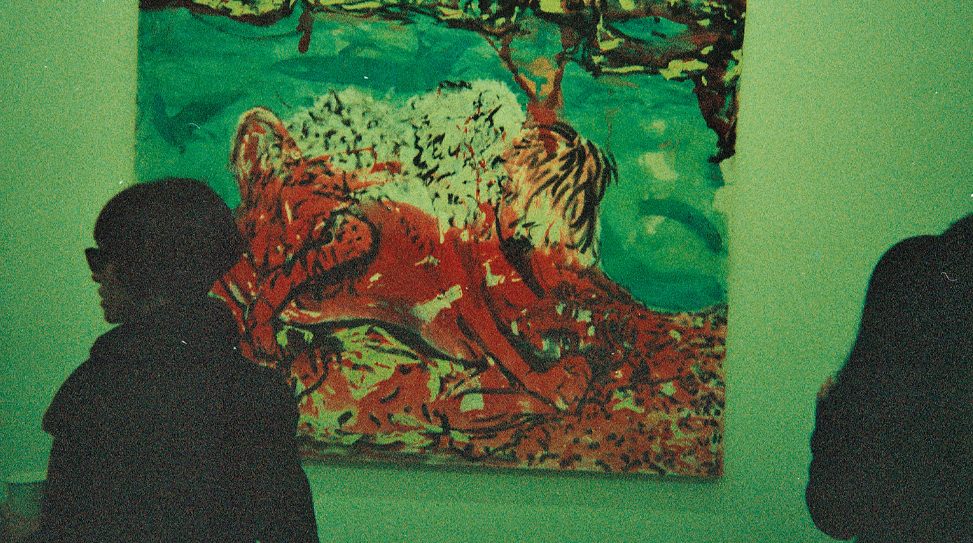 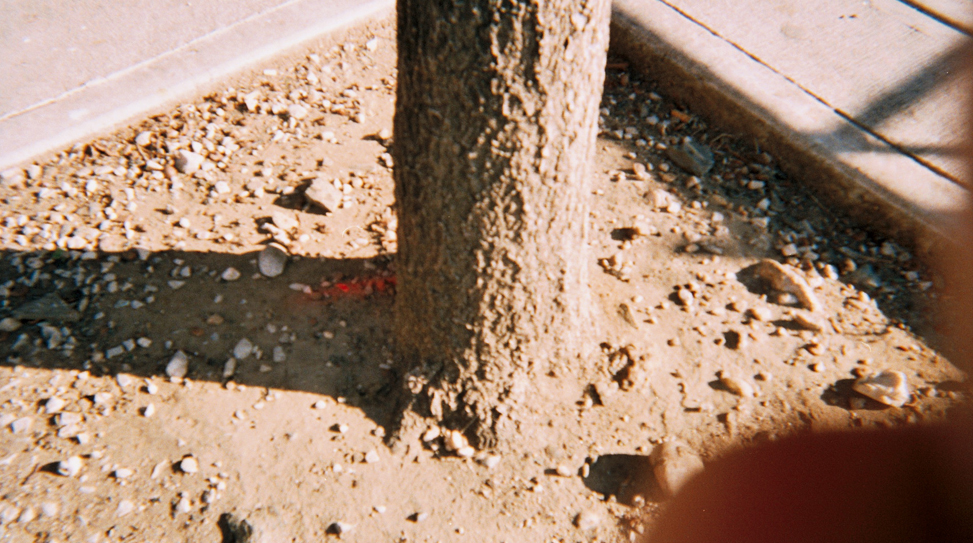 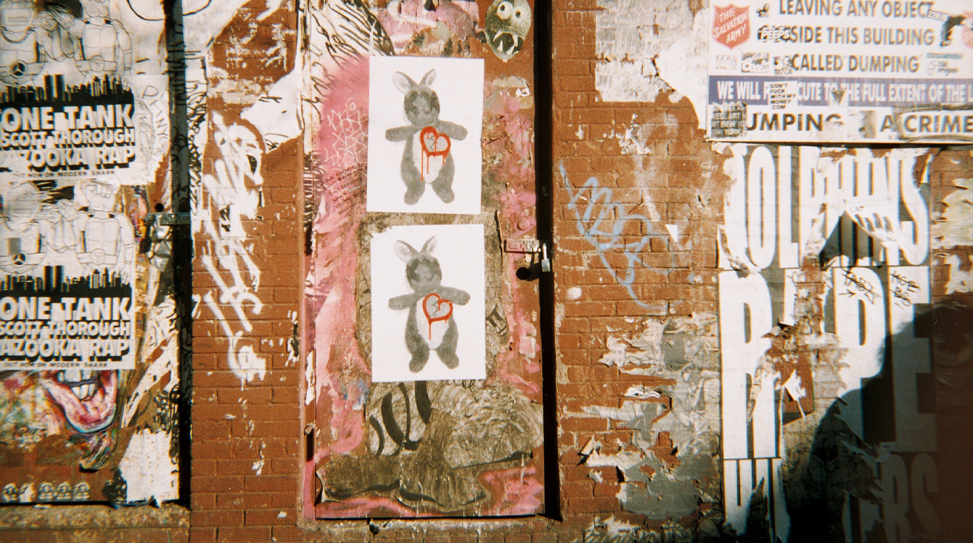 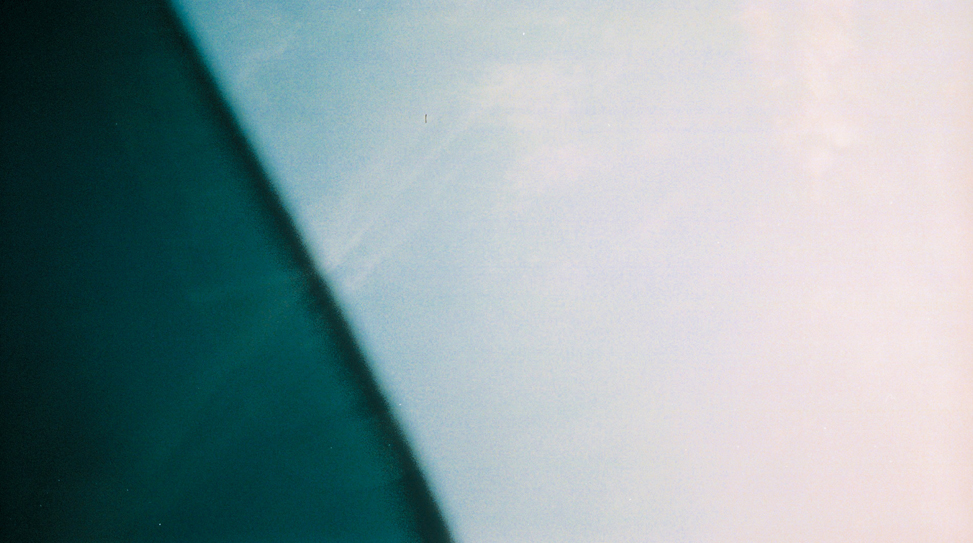 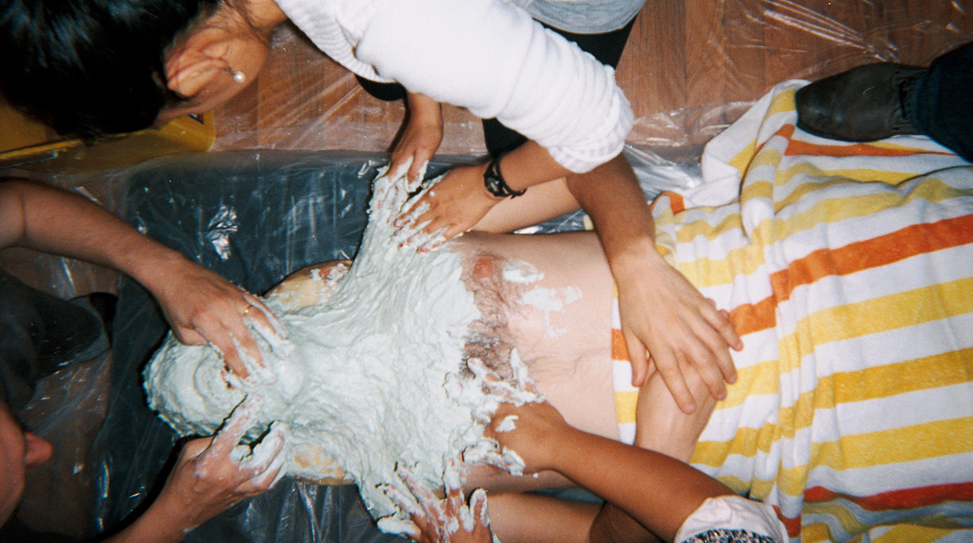 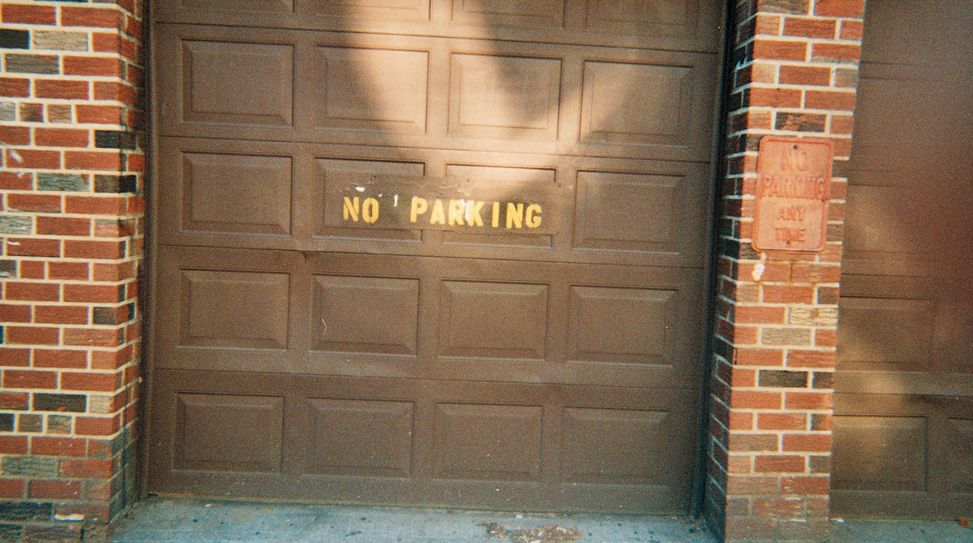 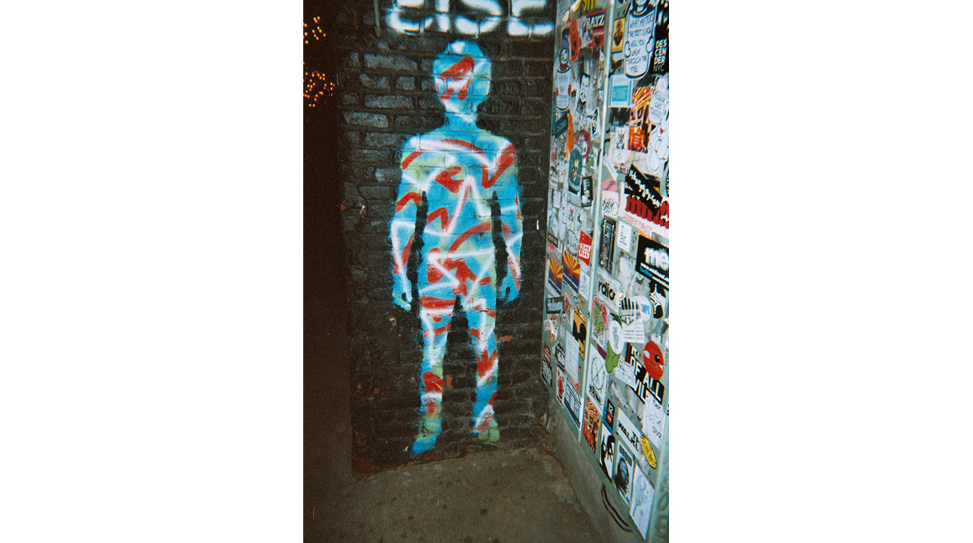 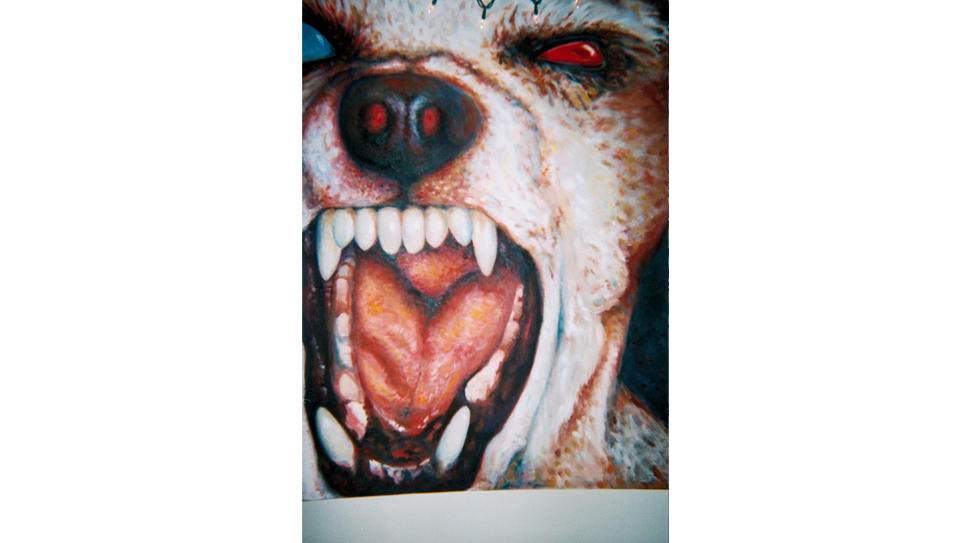 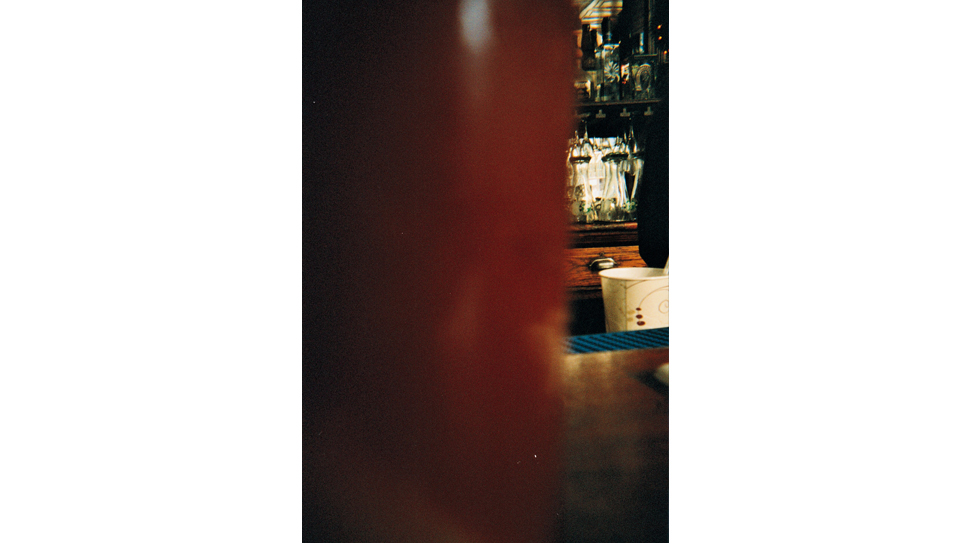 For our latest edition in this series, we asked Anson Mount, the star of AMC’s critically acclaimed TV show Hell on Wheels to document his life for an unspecified period of time in New York City. Scroll through the embedded gallery above to see what he captured.