The Oscar front-runners and the Greek filmmaker on playing with rabbits, corsets, and fisheye lenses on The Favourite. 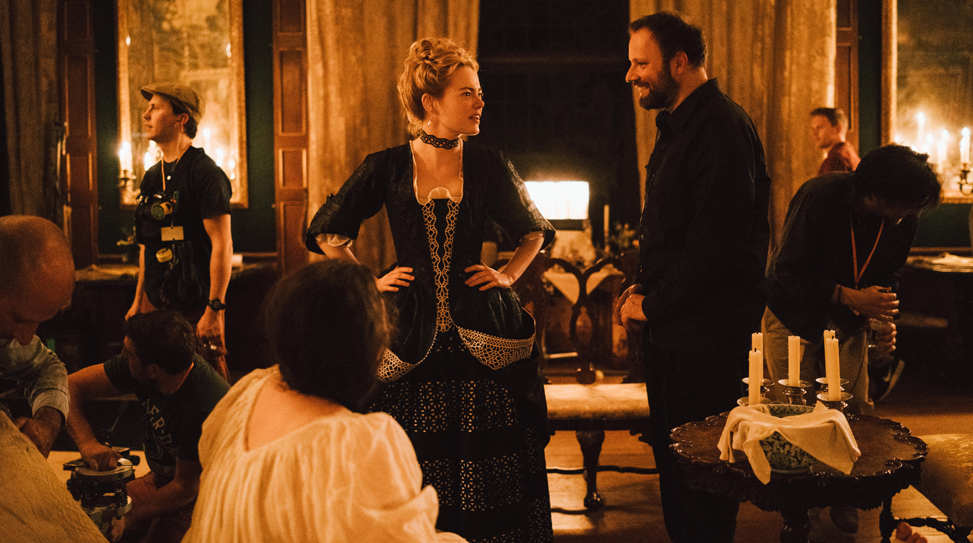 It’s relevant to any period how people in such positions of power—according to their character, behavior, and mood—can actually affect very important events in history.

Yorgos Lanthimos’ scabrous, period tragicomedy The Favourite depicts a power tangle connecting three women at the dawn of 18th century England. It’s loosely based on the story of Lady Sarah Churchill (Rachel Weisz), the Duchess of Marlborough, and her cousin Abigail (Emma Stone), Baroness Masham, competing for Queen Anne’s (Olivia Colman) favors, thereby setting the arena for a rather dysfunctional, politico-sexual chess game. A sublime acting showcase for the triumvirate of formidable female leads—Colman in particular shines as she cements her long overdue movie-star status with an uproarious turn as the emotionally volatile monarch—the film is also the absurdism that’s very much in Lanthimos’ wheelhouse since 2009’s Dogtooth.

By the time we’re introduced to Queen Anne, whose 12-year reign was plagued by health issues, she’s already infantilized by a lifetime of emotional manipulation. Frail and distracted by her endless battle with gout—she also keeps 17 house rabbits in her bedchamber, one for each of her failed pregnancies—the only way to relieve the agony is to wrap her legs in slices of beef. In fact, her stomach is so weak that she can’t even indulge in a slice of cake without vomiting it up just moments later. And for this queen, why would that be a reason to stop trying? To put it mildly, Her Majesty’s not entirely there. This means all duties of the crown fall to her lifelong friend and chief confidante Sarah, who serves as her queen’s proxy with Parliament. She guides the unschooled, uncertain monarch in matters of public policy—namely, the controversial war with France that England is embroiled in. Sarah is also, we soon discover, a more intimate friend, for whom sex is just one way of holding sway over the sulky, jealous, and childish royal vessel. This empiric order of things is disrupted by the arrival of Abigail, an opportunist who was once a lady herself, but whose father gambled away their estate. She basically begs Sarah for a job, based solely on their distant relations. With an upturned nose, Sarah puts her to work as a scullery maid. It is here that Abigail uses her wiles to advance up the ranks, plotting to restore her own stature.

Yorgos Lanthimos: That’s a pretty big question. The whole point is what you’re expressing: we’re looking for the favorite and how the favorite functions within this world. And what does it mean? Obviously, if there was a straightforward answer, we wouldn’t make this film.

There is a private tragedy in the queen’s life and her disorder has been displaced onto her large menagerie of house rabbits. Olivia—are the animals tremendously helpful in making the world feel full or do they become a nuisance at a certain point?

Olivia Colman: CG rabbits wouldn’t have been the same. I think it was fine, but I wasn’t the one who had to sort out the continuity. It was lovely! Em and I are both mad animal lovers so we had a lovely time. We could barely remember our lines on the days with the rabbits. So I didn’t see it as a problem. We just had to keep them in the corner because the rooms were so vast.

Yorgos: Actually, I was surprised because it was very easy to sort and it fell into place most of the time. All we had to do, as Olivia said, was to restrict where they were because they were in huge rooms. I thought it was going to be a nightmare—it usually is on movies—but they just seemed to enjoy themselves, hanging out.

Olivia: They peed a lot in the bed.

Yorgos—what was the impulse behind using fisheye lenses? You don’t see that very often.

Yorgos: There are a couple of reasons, I guess. The first thing is that it’s a personal preference that I’ve been developing over the past few years on my last few films. Especially on this film, I think we went even more extreme because we felt that it visually represented a lot of the themes in the film: the lone human figures within those huge spaces, the fact that so few people actually affect the vaster world, and the fact that, although the places were huge, they were kind of distorted and felt quite claustrophobic at the same time. Another thing was that I had remembered those Dutch paintings from earlier centuries with the convex mirrors painted in them where you can see the whole space refracted, distorted in those mirrors. It also felt appropriately period in a way.

Emma Stone: I was pretty consistently obnoxious on set trying to figure out what lenses they were using, so I knew what lenses were used throughout the movie. I just didn’t know how it was all going to piece together. It was pretty startling to see that much wide-angle, but I knew that pretty much every master was going to be in that wide-angle.

Olivia: I had no idea what lenses they were using. I watched it like, “Wow!”

Emma—how much did the historical accuracy matter to you in your preparation?

Emma: Why just me?! [Laughs] Well, I was the only American in the cast… I probably didn’t know the extent of British history as much as I think you guys—

[Olivia shakes her head in disagreement.]

Okay, maybe not. [Laughs] I mean, I did a bit of research. I read about Sarah and Anne and the little that you can find about Abigail. But the nature of their relationship wasn’t completely understood so I just sort of went with whatever Yorgos and the writers [Deborah Davis and Tony McNamara] said.

Yorgos: Yeah, trust us. It’s all true. [Laughs] The reality was that the historical aspect of it and whatever facts we assume about the period were taken as a starting point. Then we were just interested in creating this particular world and this story around the three women that’s not necessarily loyal to the specific events or politics of the time. We actually tried to simplify that part so we could focus more on the characters and, through them, understand how it’s relevant to any period how people in such positions of power—according to their character, behavior, and mood—can actually affect very important events in history. We focused on whatever we felt was necessary and interesting to tell that kind of story and then veered off in many different directions.

There’s a very funny dance number in the film. How did you land on that particular style?

Yorgos: We tried to use quite a few contemporary elements in the film. One of them was dance and the physicality of the actors in general. We just felt like—sometimes in subtle ways and other times not so much—incorporating textures that felt more contemporary, starting even with the language from the script stage. We didn’t try to make the characters sound the way we thought they sounded back then or the way we assume they spoke. From that decision to use more contemporary language, dance, and also costumes, we tried to stay loyal to the shades of the period. The fabrics of the costumes and the textures in the music sometimes ring true to the period and at other times are quite contemporary.

The costumes are half the fun on a period project such as this one, is it not?

Emma: Well, I had never worn a corset before and, other than it being harder to breathe, it does inform you to the time period and the restrictions on women lacing yourself into that. You have to stand in a certain way and walk in a certain way in order to be able to stay upright, really. So I felt like that was helpful. My first costume was denim—it was made out of salvaged jeans. Then there was a lot of laser-cut leather. They were really contemporary fabrics. When I move up to the black and white costume where it gets so elaborate with he hairpieces and everything, it’s so defined. Abigail’s rise is so defined by what she’s wearing. I thought it was incredibly helpful.

Olivia: I didn’t have to wear a tight corset. I was in a nightie most of the time. It was brilliant! But the bulk and the weight of the ceremonial costume really helped to perform. Ugh, how awful it must’ve been to stand still for any length of time and carry around with you an extra stone of fabric… Dressing up in nighties—I had it the best. They would show up in corsets barely able to breathe. I was fine eating cake.

Olivia—what is your process as an actor?

Olivia: I don’t really have a process. To me, I’m like an overgrown teen. It’s just enormously fun! When you get that script and Yorgos kind of does whatever he wants—no process, I’m afraid.

Yorgos: We had the rehearsal period.

Olivia: I’m so sorry, we did. There was a lot of process. [Laughs]

Yorgos: It was really silly, but we did do that.

Olivia: That’s true, yes. We did a little of that. You should always ask Yorgos! Don’t ask me.

How much did the screenplay change from start to end? Did you improvise much?

Yorgos: I guess we were still rewriting in rehearsals. We saw how certain things worked or didn’t work and changed a couple of things. But other than that, we felt like the script has a very particular tone so when you think you have it right, it just feels right. You just try to go with it. Any kind of improvisation was mostly physical or in the way that we staged the scenes. Maybe we added a couple of lines here and there, like that scene where Olivia screams at her lovely page. It’s all about figuring out how the scene is set up and how you can change it in order to make it better because you might’ve thought something differently, which doesn’t really work in the same way when you’re actually there going through it.

Where would you place the emotional center, taking the entire film into consideration?

Yorgos: I couldn’t answer that question. I think making a film, especially with three main characters, is such a journey and a process that it’s different for every person how they experience it and how they engage with it. I think it is and should be a different thing for each person.

Emma—what do you remember from your audition?

Emma: When I auditioned for Yorgos, he had me breathe—pant—throughout the lines like I was giving birth so I would take pauses in the wrong places. I think you just do this to everyone.

Yorgos: Not the birth part.

Was it difficult to let these characters go?

Emma: The thing is, at least for me, we all had spent so much time together that it was incredibly sad when it was over. I just wanted to be with everybody.

Olivia: I did feel genuinely bereft by the end of filming. We’ll probably be friends for life! I know we say that quite a lot, but it’s probably bollocks a lot of the time. We genuinely had a lovely time, didn’t we? In fact, Yorgos sort of set us up because we had those weeks of rehearsals… [Laughs] It did mean we could all be unembarrassed with each other and play and become really good friends.