The director and actress takes us behind-the-scenes of The Tribe, a Ukrainian film about a school for the deaf falling into anarchy. 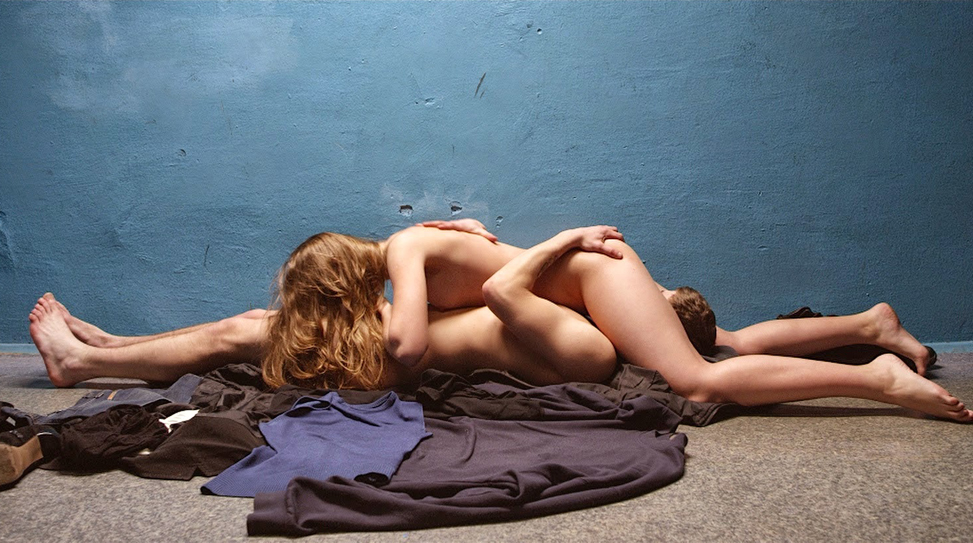 I saw them communicating in sign language and it was like the highest form of communication for feelings and emotions—a miracle.

Miroslav Siaboshpitsky recalls working with his young deaf actors. “They might do stupid things sometimes like every other teenager, yet it has nothing to do with them being deaf,” he says. “There was a funny scene when one of the kids had to walk away from the camera. You scream, ‘Cut! Cut!’ but he can’t hear you and keeps on walking. That was so funny to me.”

When The Tribe premiered at Cannes last year, Siaboshpitsky was hailed as a great new voice in independent cinema—precisely because he does not use voices. The 40-year-old Ukrainian’s debut feature, using his 2000 exploratory short Deafness as a base, is communicated entirely in sign language—without voiceover, subtitles, added music or anything else that might help explain it.

“When I made Deafness, I formed a very special relationship with the Ukrainian Society of the Deaf,” he says. “So when I went onto direct The Tribe, I already had friends in the community to consult me, tell me true stories, and help me in my search for non-professional actors.”

Then there’s the film’s narrative itself: a dark, unsparing portrait of the violent power structures of schools that exist beyond the control of teachers. The deaf school in Siaboshpitsky’s film is controlled by gangs of older students, who extort their younger counterparts—particularly the girls—into coarse acts of crime and disinhibited sex. Yet the film is so well composed, so accomplished in its execution, that these strange, unfathomably violent relationships are communicated with just a few opening scenes. “Rehearsals and rehearsals and rehearsals,” he says of creating a film that often resembles a silent, nightmarish ballet. “ We would rehearse for 7 to 10 days for each scene, moving from scene to scene like that for 6 months, nonstop.”

Until last year, Siaboshpitsky was an unknown, even for the most ardent arthouse fan. But The Tribe has been in the making since his high schools days. “On the other side of my school there was a boarding school for deaf students,” says the director. “I saw them communicating in sign language and it was like the highest form of communication for feelings and emotions—a miracle.”

The film picked up three awards when it premiered at Cannes, including the Critics’ Week Grand Prize, where the French dubbed it “un ONVI” or a UFO—a film so strange, so lacking in familiarity, no one quite knows how to respond. “It was a surprise for me,” he says. “The film sold to 43 territories and so many people ask me when I’ll be shooting an English-language film.”

Siaboshpitsky’s next neo-noir sophomore feature will be a depiction of the Chernobyl Exclusion Zone, building on his 2012 short Nuclear Waste, funded by a German production company.

The Tribe is now playing in select theaters..

Yana Novikova is one of the many breakout stars of the entirely deaf cast of The Tribe.

This is your first onscreen role. How did Miroslav [Slaboshpitsky] go about finding you?

Yana Novikova: At the time, when this all came about, I was in my third year of college in Belarus. I felt trapped, actually, because I wanted to get into acting. In Belarus, there aren’t any acting opportunities for deaf people. So when my friend told me about potential opportunities in Kiev, Ukraine, I told my mom my plans to go and she said, ‘Absolutely not!’ My mom was really against me wanting to act, so I lied about going to visit some friends. When I got to Kiev, I was staying in a house for deaf people and that’s where Miroslav approached a group of us about auditioning for a film, a different film. There were a lot of us there and they only had enough funds to choose 3 people for a callback. They didn’t select me and I was really disappointed. But Miroslav said there was another project that I might have an opportunity for, which was The Tribe. I was 1 out of 300 deaf people who auditioned for it. Then I met with my co-star, Grigoriy Fesenko, for rehearsals to see how that went, and Miroslav cast me. The rest is history!

That’s incredible. What does your mom think now, given the film’s success?

Yana: When the film went to Cannes, my mom realized that this is the real deal. When it picked up several awards, she was thrilled by the film’s success. She was definitely bothered by the nudity because I was 19 when we shot it, but, you know, it’s fine! I wasn’t a child, I was still an adult.

What was it like to see yourself onscreen for the first time?

Yana: The first time I saw the film was at Cannes. I was with the crew, the director, the producer—it was a very large group there and we were all in the audience. When I saw the film, I liked it right away. I loved all the different artistic elements of it. When I saw myself in that role, it was amazing. But during that one romantic scene in the boiler room, as I was watching it, it seemed like it took forever. I just wanted that part of the movie to end quickly and I was kind of embarrassed about that. I wanted to go hide under a table! [Laughs] It did strike me, like, ‘I’m a professional actress!’ I kept wondering whether people were liking the movie. When I looked around the audience to see what their reactions were, I could tell right away that it was a success.

So was that the most challenging scene to shoot—the love scene? There’s a lot going on in the film: the prostitution, the rape, the abortion, the physical violence…

Yana: Yeah, because Grigorily and I weren’t professional actors prior to the film being made. That was definitely some of the hardest work. But I don’t think it was as hard for him because he’s used to having his shirt off—he’s a boy. For me, at the time of filming the scene, I wasn’t ready for it. It took a lot of rehearsing and preparation. There was a lot of communication involved. Once we figured out all that stuff, it felt like I was jumping off a bridge, you know? It was exactly that same feeling for me. Taking off all my clothes, that experience I can compare to that.

This was a 6-month shoot, which is very long. What was the atmosphere like on set?

Yana: We did not play around. We were so focused on the emotional aspect of the film that we were always focused. We really delved in those characters and became different people. It was a difficult 6 months, for sure. Once the filming was done, we were absolutely relieved. And we had to watch what we ate because we couldn’t allow our appearances to change over the course of filming. We couldn’t cut our hair, for instance, because everything had to remain consistent.

Where did you stay during the filming? Did the school double as your “hotel”?

Yana: Miroslav had connections with the school for the deaf, which is where we filmed, but we were actually staying at a hearing school nearby. They were in close proximity to one another.

How have things changed since the Cannes premiere and with the film’s success?

Yana: Cannes was overwhelming: The red carpets, the interviews, the photoshoots, and being in the limelight was something I had never experienced before. Having all those people there and the film winning not 1 but 3 awards, that was amazing. Miroslav took me up onstage with him and I started crying. He told me I did a good job. It just opened things up for me on a universal level. The film winning the awards had a huge impact on me and my whole life has changed. I’ve absolutely grown. My life before playing Anna was so different from what it is now. In my former life, I was in college. I look at the world much differently now. I’m on my own path.

Will you continue acting? What’s next?

Yana: Absolutely. I’ve received a lot of offers. I’ll be acting in a new film soon.