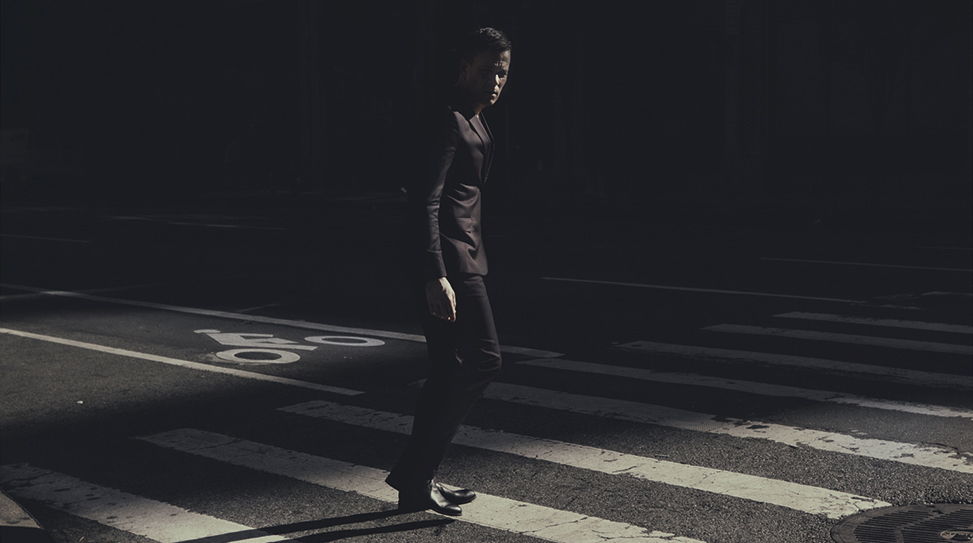 We had this hotel location in the north of Sweden for the interior shots and it was closed for the season. We were the only ones there.

By no means a traditional disaster movie in which the audience’s pleasure scales in direct proportion to the pandemonium witnessed onscreen, Swedish director Ruben Östlund’s Force Majeure nevertheless leads with the spectacular onslaught of an avalanche.

The film unfolds over a five-day skiing holiday in the French Alps, a pricey getaway for Tomas (Johannes Bah Kuhnke), Ebba (Lisa Loven Kongsli) and their two children. Catastrophe strikes on day two as they sit lunching on a veranda. An avalanche—“controlled,” Tomas reassures them—starts rolling down from the mountainside. Consternation grows. Ebba’s instinct is to reach for her children, while Tomas legs it. The whiteout immediately dissipates, turning out to have been nothing more than a harmless fog from distant explosions. Tomas reappears at the table as if nothing had happened. The family is noticeably shaken by the event, which in the end didn’t cause any bodily harm, although the couple’s rapport suffers what looks like irreparable damage.

This deceptively simple set-up provides the entire dramatic framework for Östlund, here painstakingly examining the aftermath of a man’s split-second decision to save his own skin—instead of his own kin—and how the father in question and those around him try to make sense of this revelation. What follows is the protracted postmortem of a family that had, in a sense, died in that cafe after all. Tomas is forced to consider the ramifications of his cowardice.

Anthem spent an afternoon with Kuhnke to discuss the film, sex robots, and that video clip of him performing at Melodifestivalen, a massively popular Swedish singing competition.

I obviously Googled you and found that YouTube clip. You know what I’m referring to.

The thing you saw wasn’t so good. [Laughs]

You don’t have to do that here. Come on, that was a catchy song!

That competition is quite big over there. The opportunity only came to me because of my background doing musicals and theater. Some guy said I should sing for this—blah blah blah—competition, and I was like, sure, why not? Sometimes these kinds of things are good for me because I think it’s better to just do it and get rid of it. Then I can continue on my journey.

So you’re not actively pursuing a music career on the side.

Acting is my main thing. I actually went to music school and had theater on the side. It was a performing arts school. Then I wound up switching to theater because I was young and there were so many girls there. [Laughs] I was also in some punk bands. I did the Hedwig and the Angry Inch musical in Sweden. That’s why I’ve done some singing, but I sort of put music on the shelf.

Force Majeure is your feature debut, if I’m not mistaken. How did this film come about?

I met with Ruben [Östlund] kind of late in the casting process. We liked each other really quickly in the meeting. We just talked for three hours in his office. I auditioned, too, but it did come out of the whole casting process.

What’s your overall impression of the experience looking back on it?

You know, in movies, you get a chance to be the better you, the nicer you, the higher you. You’re taking on parts where you’re more beautiful, more intelligent, funnier, and so on. This was quite the opposite because we stare deep into the hell that marriage can be. [Laughs] You’re seeking out the very feelings you’re fighting against every day. And I didn’t know Lisa [Loven Kongsli], who plays my wife, before this. She’s this very attractive woman from Norway and we couldn’t have her be that in the movie. She’s suppose to be this normal woman who has been married for ten years. So three months before we started shooting, we Skyped every day for one hour where we would read through the script and just talk about stuff. That was interesting because, in the beginning, we would try to find a nice spot for the Skype conversation, do our hair, find the right light. We were excited: “Hey! Oh! How are you?” [Laughs] After a month: “I have to Skype with her today. I can’t stand it!” So when we first met on set, it felt like we were married already.

How did you feel about playing someone who, largely through the eyes of his wife, becomes an entirely unlikeable person to the audience?

I felt very bad while we were doing it. We had the luxury of not shooting in our hometown. We were up in the French Alps. We had this hotel location in the north of Sweden for the interior shots and it was closed for the season. We were the only ones there, shooting early in the morning into late at night. We were in character all day and I felt so bad because of the character I play. “I feel so bad! I need to go to therapy!” [Laughs] It really took us over, doing this.

You had the entire place to yourselves? The Shining?

Yes, it was very creepy! You would hear the wind whistling through the place. We definitely pushed the movie pretty far and pushed the characters quite far as well. But don’t get me wrong, we had a lot of fun making it. For example, with the whole crying thing, we took inspiration from the “worst Man Cry ever” video on YouTube. We wanted him to look beyond pathetic. We wanted him to be the opposite of the “heroic man”. That came out of improvisation as well.

I think it was important to play the humor. It’s obviously a serious moment for the characters, but we pushed the crying so far that it can’t help but turn comical. The audience has to see that our struggle is real. Being human is about being pathetic. And pathetic is quite fun to watch, I think!

And you obviously knew how to ski already.

I’m from the north of Sweden. That’s what we do! [Laughs] We actually shot all the skiing first in the Alps. That was really nice because it allowed us to bond and get to know each other better. After that, we shot all the interior scenes. The avalanche was done in the studio with a green screen. The very last scene we shot at the border between Italy and South Tyrol.

What was Ruben [Östlund] like to work with? From the very first shots, I remember thinking, this guy is a master.

He’s a maniac! We had such long days and he would say things like, “We have to do this! This has to be the best scene ever!” Every single day. I think he could live on just sugar cubes because he gets so caught up in his work. He creates that kind of atmosphere so everybody who works with him wants to match that. I think he knows how to sort out the people who won’t last during the casting. Some actors are best in their first two takes. Ruben’s method is very special. He creates a space where we can do up to fifty takes. I really enjoyed working with him.

What do you want to tackle next? What’s happening behind-the-scenes?

If we’re talking about a dream, I would love to have a part on Louie. Louis C.K. is brilliant.

Louis C.K. At least I got that one out of you.

[Laughs] Louis C.K. and Sean Penn. I like his movies.

Name one movie you really enjoy or admire. Anything that comes to mind.

Blue Velvet. I’ve seen it so many times. I watched it again a month ago and it’s still very good.

Force Majeure obviously made a big impression at Cannes this year. Did that experience sort of open up some new opportunities for you?

I just finished my work in theater and this is my first film that we’re still promoting, so we’ll see what happens. We’re heading out to L.A. tomorrow and there will be a lot of meetings with casting people, agents, and so on. It feels unreal, but it’s also very funny. I also did a big Swedish TV series called Real Humans that’s now been sold to something like 45 countries.

I looked that show up. You play a sex robot! Awesome.

I shot that and Force Majeure simultaneously, so I would get four days at a time to go back to the hotel in-between shooting the show where I’m this bad-ass robot with angst and no underlying feelings. That, as it turns out, was the therapy I needed.