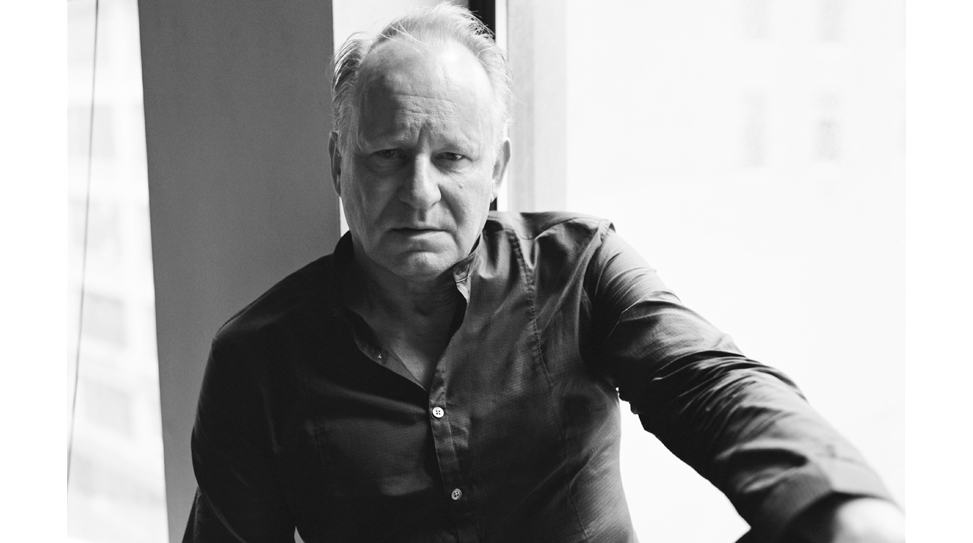 I'd rather make a half-good film with really brilliant, nice people than an excellent film with a mean genius.

Snow falls on the just and unjust alike in Hans Petter Moland’s In Order of Disappearance. The crime saga opens on a remote, snow-blanketed town in the backwaters of Norway. The always-reliable and on-point Stellan Skarsgård is Nils Dickman, an even-keeled and taciturn snowplow driver so dedicated to his job to keep the country roads clear that, despite being a Swede, he’s named Norway’s Citizen of the Year. But Nils’ good fortune proves short-lived when his son is taken out by a trigger-happy gang in a case of mistaken identity during a local drug-trafficking operation. This sends the once mild-mannered man into an outrageous rampage of blood-soaked revenge. Pausing only to catch his breath—Nils is quite old—he’s truly in over his head.

As the film’s Norwegian title Kraftidioten or “The Prize Idiot” implies, the tone of In Order of Disappearance is altogether absurdist. As the bodycount climbs ever higher, the film slowly transitions from revenge thriller to dark comedy, which is bound to tickle fervent Coen Brothers and Tarantino fans. Firmly anchored by Skarsgård’s usual stone-faced gravitas, Nils manhandles, bludgeons, and shoots his way up a gangland food chain towards his final target—the vegan crime lord “The Count” (Pål Sverre Valheim Hagen). To complicate matters, “The Count” has no idea who’s dismantling his operation and jumps to the conclusion it must be rival Serbian gangsters. And so all the characters become knotted into a rapidly escalating cycle of tit-for-tat violence.

In Order of Disappearance marks Skarsgård’s fourth collaboration with Moland, which first began in 1995 with Zero Kelvin, and also includes 2000′s Aberdeen and 2010′s A Somewhat Gentle Man.

In Order of Disappearance opens in New York City and Los Angeles on August 26.

So Stellan, you really are the human equivalent to an unstoppable snowplow.

There’s obviously a lot of brutality in the film. I just didn’t anticipate how funny it was going to be as well. It’s all very cleverly done. What do you find funny on a day-to-day basis?

I laugh a lot! My wife is very funny. My children are extremely funny on a day-to-day basis. I like everything from slapstick to the more sophisticated humor. Hans Petter Moland’s A Somewhat Gentle Man and In Order of Disappearance both have the kind of humor that I appreciate a lot.

A Somewhat Gentle Man could work as an alternate title for In Order of Disappearance.

When it comes to emotions, Nils is out of his element. He’s pragmatic. You give him a problem and he’ll find a practical solution. Are you similar to Nils in that way, or different?

Hopefully, I’m very different. He’s pragmatic, but he goes on this revenge killing spree because he doesn’t have the tools to handle his emotional situation. He doesn’t even have the language to talk to his wife properly. A situation like that will probably bring out the caveman in any of us. Hopefully, we find ways to tame the caveman and handle the situation in a more civilized way.

I know this was a long time ago for you now, but if you could take me back to your very first reading of the screenplay, what stuck out? What was immediately attractive to you?

What immediately stuck out was that I didn’t see the film, meaning, I couldn’t figure out what kind of film this was going to be. It was such a mixture of different styles and genres and tones. At first, I was very reluctant do it, even though it was Hans at the helm and I love working with him. Eventually, Hans said, “Trust me,” because he had a clear idea about what he wanted to do. And I trusted him. When we wrapped the film, I still didn’t know what kind of film it would be. It wasn’t until I saw the first cut that I understood how he made all the disparate tones work together.

Watching that first cut must’ve been a tremendous sigh of relief for you.

It was. I trusted Hans because he’s a great director and he has a great sense of tone and everything, but I couldn’t imagine what the film would look like. He managed it and I was relieved.

You see the precision start to finish. There are such delicate and precise tonal shifts that, in the hands of less confident directors, the film would’ve gone spinning off course.

I trust Hans a lot. I know what he’s good at and what he’s not so good at, and vice versa. We’re friends outside of work as well. It’s a relationship that’s very much built on friendship and trust. It’s just very pleasant working with him and we have a lot of fun together on set. It’s the lowest anxiety level that you can imagine. We encourage each other to be braver and more playful.

Does working with a close friend in a professional context amount to all positive things, or does it create some minor roadblocks that you wouldn’t run into otherwise as well?

I only see the advantages. If we worked together every day for eight years, then maybe it could become very stale. But if you’re in a good marriage, why break it up? When you know each other so well, you speak absolutely frankly because there’s a basis of trust and love. You don’t have to filter your opinions, or prance around and court each other. There are things you don’t even talk about because we’ve already talked about them, so we just do it. The less you talk on set, the better.

Your collaboration with Lars von Trier spans six films so you obviously enjoy working with him as well. Does your desire to work with a director often trump the material itself?

Often. I love the process. I love filming and working and creating together with people, even if the material isn’t so watertight. For Nymphomaniac, I didn’t even see the script. Lars hadn’t even written the script when he asked me to be in it. You want to hang out in an atmosphere where creativity is let loose and you’re amongst friends and feel safe and everybody’s happy, with no hierarchy or stupidities. It should be all about having fun and doing good work.

So the experience of making something is more important than the end product for you.

The experience is more important. I’ve made like 100 films now and the experience of making films is my life. The end product is just going to be what it is. That’s for other people to judge. They can choose to see or not to see, and you can’t do much about them. I’d rather make a half-good film with really brilliant, nice people than an excellent film with a mean genius.

Your filmography is extensive and it’s intimidating to even think about broaching that subject. But in what ways do you think your palate has changed over the years, in terms of the kinds of projects you’re willing to make time for now that you wouldn’t have in the past?

With maturity comes less pretension, which also means that I’m more tolerant towards lighthearted material. It becomes all about the joy of doing it. When I was 20, I was extremely pretentious and everything had to be art. Art is wonderful and necessary, but it’s not more important than life.

That doesn’t come from a place of regret, right? It’s part of maturing like you’re saying.

No regrets whatsoever. When you have your first child at 20 years old, it’s a disruption on your life and you don’t know how to handle it because you don’t know who you are or what will happen to your life. My youngest is now three, and when he was born, it was all about him. There were so many things that I thought were important when I was 20 that I know aren’t important anymore.

I don’t think I need to ask you how you feel about remakes in general since you were in David Fincher’s The Girl with the Dragon Tattoo, which was quite extraordinary. But what are your thoughts on the forthcoming In Order of Disappearance remake with Liam Neeson?

I don’t mind it at all. I had one film remade before and that was Insomnia. I didn’t see it, but I heard it was good. It was done by a very good director and that’s fine. It’s also understandable because there are so many people out there who hate reading subtitles. If it’s a good story, why not make it accessible to more people? But what I don’t like is when you remake something and clip the wings off the original, like sanitize it or do something stupid with it. The Girl with the Dragon Tattoo was a great remake. If Hans is doing the In Order of Disappearance remake, which is what the rumors say or he’s been offered to at least, then I know it’s going to be interesting.

I have no context for this, but is it true you were once mistaken for Liam Neeson?

Many years ago, I was walking on the street in New York and this beautiful lady on the other side of the avenue started screaming, “Oh my god! It’s you!” She ran across the street and I was flattered. She was beautiful. But then she came up to me and said, “Oh I love you, Liam.” [Laughs] That’s where the story came from. It did happen once. Now the rumor is that Liam is going to take over my role in the remake and I think that’s good. He’s a very good actor and a lovely man.

Have you officially signed onto The Man Who Killed Don Quixote?

Terri Gilliam has been trying to get this off the ground for a long time.

With varied success, to say the least.

Are you going to lift the “Terri Gilliam curse,” Stellan?