The recipient of Cannes’ Queer Palm and Best Director Award takes us behind the scenes of Stranger by the Lake. 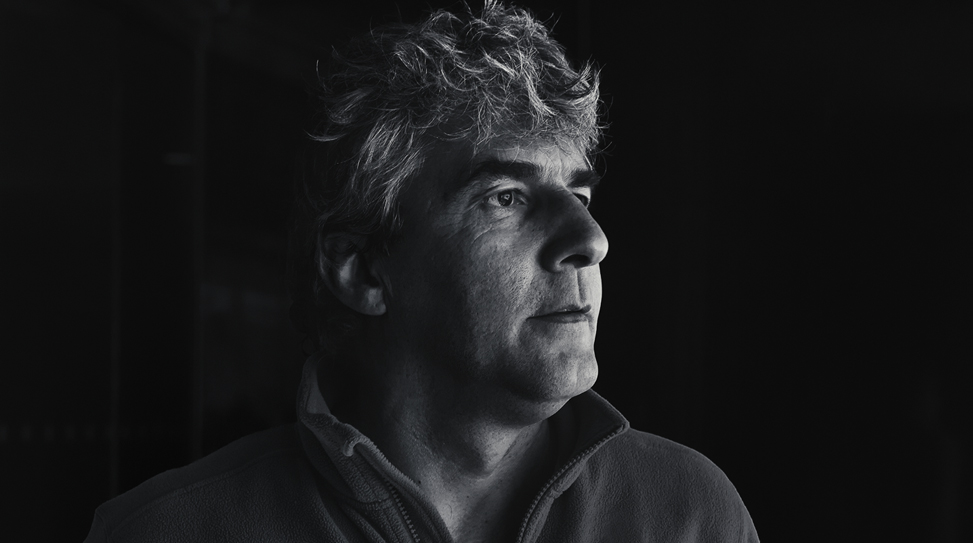 For me, films were something very far from my experience, both geographically and socially. I come from a very small town in the south of France.

ALAIN GUIRAUDIE, STRANGER BY THE LAKE

There are films that are more unexpected than others. Alain Guiraudie has made such a film, closer to realism and controlled almost to the point of minimalism. The intrigue begins with the title, which posits that there might be a mysterious character in question. The most acclaimed of Guiraudie’s films to date, and one that most directly concerns gay sexuality, Stranger by the Lake takes place on a secluded nature spot where men sunbathe, swim and enjoy somewhat explicitly depicted sex. The film’s protagonist, Franck (Pierre Deladonchamps), falls for a mustachioed Tom Selleck look-alike Michel (Christophe Paou), only to witness him in the act of drowning a lover.

The 49-year-old French writer/director is well familiar with the festival circuit, having picked up the Queer Palm and the Best Director Award at Cannes last year in the Un Certain Regard sidebar. Guiraudie’s is an intuitive and erudite cinema that combines insanity with grace, and aggression with meditation. He’s a visionary who forgoes making grand statements and leaves things rather objective in the long run. The more the film exposes itself, and does so with the bright frankness rarely seen in cinema, the more mysterious the whole thing becomes. Stranger by the Lake carves its own path and it’s full of aesthetic rewards that governs the move.

Stranger by the Lake opens January 24th at the Film Society of Lincoln Center’s Elinor Bunin Munroe Film Center and the IFC Center. A retrospective of Guiraudie’s rarely seen work, including all of his short, medium-length and feature films will be presented by the Film Society of Lincoln Center from January 24th to January 30th. More details after the jump.

What’s going through your mind during the lead-up to your retrospective at the Film Society of Lincoln Center this month?

It was actually Dennis Lim who was behind it all. He came up to me right after Cannes and asked me if I might be interested in having this retrospective. I said ‘yes’ right away. Actually, I’ve known Dennis for a very long time. He brought me to New York ten years ago when we were doing the top 20 films of the year for the Village Voice. We go a long way back. I really like him a lot and run into him regularly at festivals.

Do you feel like this retrospective comes at a right time? You have so much more ahead of you. I wonder if they should call this a mid-career retrospective.

[Laughs] I think I’m still a little young for it to be a full retrospective. You know, I’m sometimes amazed when people have retrospectives of their work because I’ve had retrospectives in Paris and Vienna at a time when I only had two medium-length films and three shorts. It’s true that the success of Stranger by the Lake has spawned more retrospectives, so there’s more demand to do it around the world.

When did your eyes open up to film? You’ve also written novels and you have acting credits under your name.

We need to clarify two things first. First of all, I’ve acted in very few films and I really wouldn’t consider myself an actor. Secondly, even though I’ve written novels, none of them have actually been published. I’m not a published writer or an author. I’m an author maybe, but I’m not a published novelist. I actually wanted to make films for a really long time. If I had to get specific about the particular year, I would say probably from the age of 12. It was something that was always there. For me, films were something very far from my experience, both geographically and socially. I come from a very small town in the south of France. Cinema was always something that was associated with Paris. On a social level, film was something reserved for rich people. That’s why I wrote those novels! [Laughs] After the novels, I wrote a short and was able to put together the funds. I made the first one, another one, and then the next one after that… That was part of the process.

Stranger by the Lake is deceptively simple. There’s not too much dialogue and it’s a quiet film that happens to have this high concept. In actuality, it’s quite complicated. What was the seed of an idea that you started working with?

I knew that I wanted to tell a really complicated story because these kind of stories are really complicated. I had already made three features and they were pretty much made in the same kind of way with bigger crews and bigger sets. What I really wanted to do with this film is to make something with a smaller crew, using very few actors, and maybe utilizing a single location. In terms of other factors like the shooting conditions, we used natural light and the sound was all found on location. The other thing I wanted to do was to move away from the very lengthy process of making a film. I wanted to sit down, write a screenplay one winter, film it the following summer, and have it be available to be seen that winter. I think that’s why I returned to this idea of making the film where it would be very simple and it wouldn’t be big budget. Things didn’t work out the way that I had hoped because I wasn’t able to shoot that summer. I had to wait for the summer of the following year. This was really due to financial reasons. Although we were making a low-budget film, we still had to secure the financing.

What about in terms of the compositions, the editing and the overall look of the film? How scripted was that in comparison to maybe other things that were found on set or in the editing room during post-production?

The film was very much scripted. I put everything in the screenplay and it was shot pretty much how I had it written down. The things that weren’t scripted were the fantastical elements. That was something that I only saw after having shot a particular hill or the top of a particular part of the location. Those elements of fantasy were found when we were making the film. It was something that really presented itself during the editing process. Originally, there was a lot more that was scripted. There was much more written text for the film. It had a lot to do with removing things as we went along.

I had a chance to speak with Christophe [Paou] at the Busan International Film Festival and Pierre [Delandonchamps] in Paris, and it was interesting to learn that neither of them created backstories for their characters. We really don’t know anything about these characters outside of the lake. Did you at any point feel it necessary to have those backstories?

No, I don’t do that very often. [Laughs] I have in my mind a very precise idea about what I want these characters to be and who they are, but I don’t need to know what their fathers or mothers do for a living. I don’t really have any desire to work in the realm of psychology.

You saw hundreds of actors, so I wonder what it was about Christophe and Pierre that jumped out at you. Is this very instinctual? Are these qualities that you can’t really quantify?

I guess that first thing you consider is the quality of them as actors. They’re great actors with a great deal of presence. It was the way in which they spoke the text. In the case of Pierre, he was very close to my original idea. But for Christophe, not so much. Even in the way Christophe speaks, there’s something strange about him. He had this quality that I hadn’t originally envisioned for the character. What was also very important was that, when I had them working together, the two of them as a couple made sense immediately. It was the perfect combination.

I’m sure you’ve discussed this in great length by now, but I understand that you went way further than what we see in the film in terms of the nudity and the sex. How far did you actually go?

How do you know this? Did Christophe and Pierre tell you?

One of them did.

[Laughs] The truth is revealed. There were definitely things that they didn’t feel comfortable doing. When we were editing the film, I realized that it wasn’t really necessary to have all of these sex scenes. There were actually several sex scenes that we shot that I didn’t even bother to edit into the film. There are also some really fundamental problems with this. If you have a scene where you show men making love without condoms or you want to show penetration without condoms, you run into some real, ethical problems. And the actors don’t know each other, which also presents a problem when you’re filming a scene like that. In the end, we just decided not to go there.

After seeing the film, I couldn’t help but imagine how different it would’ve been if it dealt with a man and a woman in a straight cruising spot.

What’s coming up next? Are you constantly writing?

I am writing and there’s a script that I’m raising funding for. It’s definitely something that I’ll have to rewrite though. I’m writing every day.

When you take on a new project or develop a new project, how much do your previous efforts inform what you want to do next?

I really like to take on films that aren’t like each other back-to-back. That’s a better way for me to work. What also interests me is to work on things that frustrated me from a previous film. I put stuff that didn’t quite work into a new film and try to work it out.