A sit down with one of the most innovative visual artists of our time to discuss the foremost thinker of modern times Noam Chomsky. 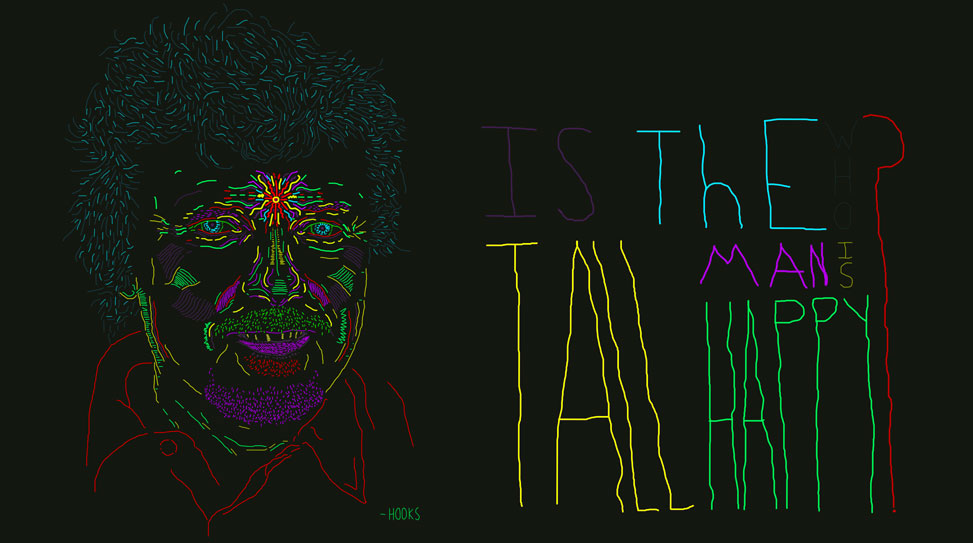 [Chomsky's] argument is always backed up by very serious work and verification, which you don’t have in conspiracy theory.

IS THE MAN WHO IS TALL HAPPY?, MICHEL GONDRY, NOAM CHOMSKY

Even Michel Gondry must sometimes surprise himself with his own extraordinary ideas. Not one to limit himself to a single creative outlet, the innovative director of Eternal Sunshine of the Spotless Mind and The Science of Sleep, among many other achievements—we’ll spare you on this—approaches each endeavor with the same kind of creative flourish and immaculate attention to detail. His latest idea comes in the form of Is the Man Who Is Tall Happy?, a unique animated documentary on the life of controversial MIT professor, philosopher, linguist, anti-war activist and political firebrand Noam Chomsky. Through endlessly complex, lively conversations with Chomsky and brilliant illustrations by Gondry himself, the film reveals the life and work of the father of modern linguistics, while also exploring his theories on the emergence of language. The result is not only a vitally important portrait of one of the leading public intellectuals of our time clearing a path for the structure of enlightenment, but also a beautiful work of art.

Is the Man Who Is Tall Happy? is now playing in select theaters. It will become available on iTunes and On Demand on November 25th.

I finally got to check out the film last night. It’s one of my favorite things that you’ve done.

It was actually surprising when you told Chomsky you were nervous conducting the interview because you’re so articulate and sure-footed when it comes to your own work. Why do you think people get nervous around others with high levels of intellect or talent?

Well, for one thing, it’s not my job to be in a room interviewing celebrities or people in general. I’m not an anchor or a journalist who does that every day where I have to engage in conversation. Although you asked me the question, you do that every day. I’m not so used to doing that. So this job makes me nervous. Even if I was interviewing Björk or even at the prospect of doing that, I’d be nervous. Then, of course, it’s facing somebody who has this aura and this depth of knowledge, and stepping into a territory mostly unknown to me even if it’s of great interest. It’s scary… I mean, I couldn’t hide it because, basically, I start to try to talk and then I have this thing where my head vanishes into the air. So I’m left with no words. I have to explain to him, ‘Well, listen, I’m a little bit nervous’ so I have time to catch up with this problem. Not knowing what to say, where it’s sort of welcoming for the audience, is the reason I kept it in the edit. It makes people feel like this guy is like me. So it’s a friendly way of approaching a subject.

I’ve had friends who think I’m some sort of a conspiracy nut for bringing up Chomsky’s stories. But it was funny when one of them saw Is the Man Who Is Tall Happy? recently and said, ‘Oh, now I get why you love Chomsky so much.’

Ah! That’s good. I’m glad it works like that. On the subject of conspiracy, he’s not doing any conspiracy theory because the principal of conspiracy theory is like a feeling you have that something is being hidden from you by the authorities. The principal of conspiracy theory is the desire to see something and be the first one to discover it, and it doesn’t really work with fact checking. It’s a bit of a fantasy approach to the world. Most of the time when people come to him with some conspiracy theory, he listens to them and a lot of the time actually likes the idea that 9/11 was an inside job. I mean, he wrote a book on this event, about the consequences, but when people come to him with this conspiracy theory, he doesn’t follow that story. He really believes that it was those people, those terrorists or whatever you want to call them. Basically, he’s really about checking the facts when there is conflict between him and other philosophers or journalists or people who have different beliefs. His argument is always backed up by very serious work and verification, which you don’t have in conspiracy theory.

Where do you get your information?

Well, a lot on the Internet, but you have to check the sources like Chomsky said. The Internet is a great tool, but you have to check the sources because some could be really misleading. There’s tons of garbage out there and you have to make the effort to see who wrote it. All the sites that I’ve learned on are grounded and it has to have a certain ground. So I get my information from that. Sometimes, even with Noam, we exchange emails and he suggests websites to check out and papers to read written about a certain subject. Even he uses the Internet. I use the Internet. Of course, I think books are more in-depth.

You have a son who’s also a phenomenal animator?

He’s more of a painter, sort of an artist in general. A video artist.

How do you see him evolving?

Well, first of all, he’s more outspoken than I was at his age. He’s very interested in others and very curious about other cultures. He’s very, how do you say, street-smart? He will talk to bums, for instance. I’m sorry for using that word, it’s probably not very correct, but I mean people who live on the streets. So the information he gets is not necessarily grounded or fact checked all the time. But I remember having a conversation with him where he told me the Nazis during World War II developed parapsychological research to help them find targets and locate where people were hidden. That seemed implausible, but when I checked it, they really did do that; even the Americans. That’s an example where he maybe took information from comic books or some website, but there’s enough crossover that he can have a sense of reality. He reads a lot. I watched him grow up like the magic of cell division, seeing how different he is from me. I didn’t see him as a replica of myself at all. I actually encouraged him to be as different as possible.

When I watch your films, I feel transported to this heavenly state. What do you think you have learned from Chomsky to make our lives feel like your films?

I think it comes down to the sense of sharing. Every time you see inequality, the base of that is people trying to protect their own little group or little sphere. Like in family, like with rich people, they will make sure their fortune is passed onto their own people, but it’s so concentrated. The same phenomenon happens when two people make a decision: They don’t want to share, so they use all their capacities to get other people on their side, even the people who are supporting them against their own interests. That’s the attitude of old, conservative politics… I think if I do work in museums, public theaters and public spaces, people can come and do their own thing. Creativity can be found in everyone. I’m proud that this movie comes out around the world because it goes to show that anyone can express their ideas with very small means. So on that level, I have something in common with Noam. In terms of changing society, maybe I’m not doing as strong of a work as him. But in giving him a voice in a different kind of perimeter that’s more visual-orientated, I think I contribute something in my own little way to better the world. Or at least a more fair one at that. I think people can feel empowered watching this type of movie. It can stimulate creativity in people, and the more people can express their own point of view, I think the better the world will be.