The cast of Jesse Zwick’s About Alex on friendships that last, pitfalls of social media, and the beauty of ensemble work. 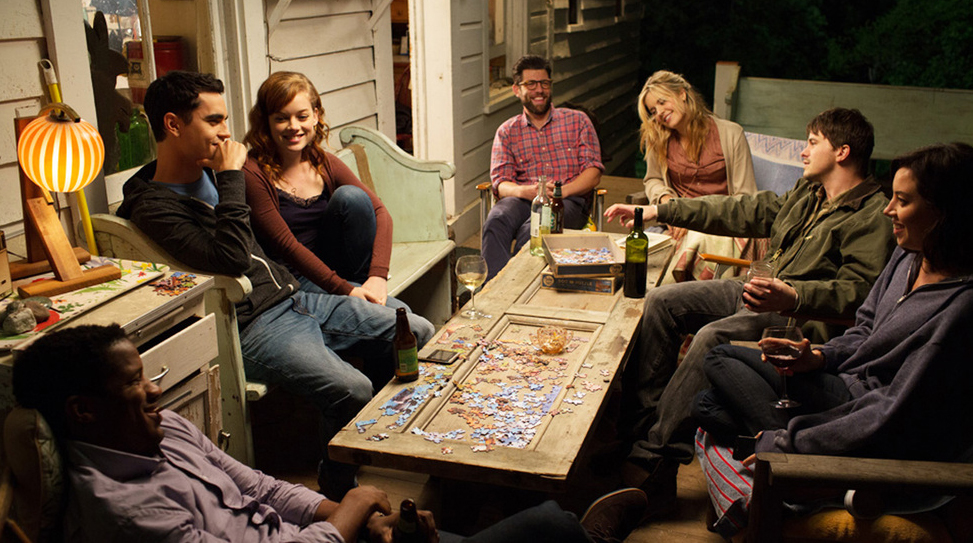 You only have a few days to forge these relationships before the rollercoaster reaches the apex and you're off to the races.

First-timer Jesse Zwick’s About Alex, which premiered at the Tribeca Film Festival back in April, gathers a half-dozen thirtyish schoolmates for some bonding time after one of them, Alex (Jason Ritter), tries to kill himself. Word of the attempt spreads as old pals from the dorm phone each other anxiously. While Alex recuperates in the hospital, they make their way from New York and elsewhere to his big house upstate, ready to comfort him and, as Sarah (Aubrey Plaza) insists, make sure he’s never alone long enough to hurt himself again. Seeds of a non-suicide drama are planted on cue with the supporting cast: Longtime couple Ben and Siri (Nate Parker and Maggie Grace) may be tugged apart by a hard-to-reject job offer that would require her to move; Sarah is threatened by the 22-year-old girlfriend (Jane Levy) that Isaac (Max Minghella) unexpectedly brought for the weekend; and Josh (Max Greenfield) is as judgmental of his selling-out friends as he is envious of their achievements and attachments.

The Millennial film is a meditation on friends growing apart that adds the timely wrinkle of the drift occurring in the supposedly binding social media age. In an era where every action is a potential meme, intent matters more than originality—much like the film itself. Thankfully, The Big Chill comparisons aren’t lost on Zwick nor the ensemble he assembled.

Are we all sufficiently awake this morning?

Should we start by talking about the friendships forged in high school and college, relating to the core premise of About Alex?

RITTER: For the most part, I’ve stayed in touch with all of my high school friends, and we all happen to live in the same city. But there was a period of time that related closely to the movie right after high school when everyone had moved away for college and things like that, and we had left this infrastructure where we saw each other every day. We all start our own lives and you sort of assume that everyone is taking care of themselves. There were a couple of times when I was blindsided by a friend trying to commit suicide and another one having a nervous breakdown. It’s so complicated when something like this happens because you initially feel guilty, but you also get angry that they didn’t feel that they could reach out to you. These characters all care for one another so deeply, and no one was purposefully trying to ignore anybody and missing warning signs. Nonetheless, one of their friends slipped through the cracks.

NATE PARKER: There’s something interesting about being needed. Alex is in trouble and it’s our duty to go help him, meanwhile, Ben and Siri are worse off than anyone. It all comes to a head. In life, we reflect until we have to confront what’s happening. We either grow from it or snip it off.

How about you, Max? Can you recall memories that helped shape your performance?

GREENBERG: You just sort of take a step back and look at your 20s when you’re just out of college. You’re suddenly off on your own to seek out your own ambitions at that point. It’s a time where you do a lot of thinking about yourself. And in going after those things to finally achieve what you want in life, you at some point reach a place in your 30s where some of those things begin settling in. You hope that you don’t have too many regrets… To me, that’s what a lot of the film was about. This one event is a catalyst that brings the group back together, and they recount what’s happened in the past few years and what these relationships mean to them now. Even though it’s not necessarily said, these are the people they’re with and you can either choose to be alone in life, which is very sad, or embrace them and the love that’s shared.

What were some other heavy lifting involved in your respective roles?

PARKER: I had to lift up Maggie once.

MAGGIE GRACE: [Laughs] I think it really lent itself for the movie that we didn’t have trailers and couldn’t run away from each other at any given moment in time. It was so much about brainstorming, huddled in one room, dozing off or playing cards together… You’re benched, now you’re in. It felt so much like a team effort and I felt like I was with a really close group of friends. We spent a lot of time together and had no self-service.

GRACE: Your work as an actor is to be present, to be in your body and in the experience. And those things are sometimes at odds with being addicted to a cellphone—again, self-service.

PARKER: Social media is about browsing. It’s a huge menu that allows you to have what you want, when you want it, and you can be done with it the second you want to be done with it. Sometimes we treat our relationships and people we care about like that. I think it’s important to sit down and have a scene without having someone to write it. A lot of the time, for actors, the only real conversations we have are when someone writes a scene. It’s like, “Cut!” [Nate maniacally fumbles around with his phone]

GRACE: [Laughs] I’m sure you’ve worked with people that are very into their phones.

PARKER: During the scene!

PARKER: We still matter. We’re still here. We still need to be nurtured. I think this film asks what true connectivity is. What are true relationships about? When you don’t like something about a Facebook page, what do you do? You can change anything you don’t like and it only takes a second. People are more and more becoming, “Huh? What? Why? Keep my attention!” I think we need to be careful.

Can you recall from the shoot, a moment or a scene, that punched you in the heart?

GREENBERG: I remember the first or second day of shooting where I felt like I walked into the room—it’s when Jason’s character enters the house after coming back from the hospital—and I thought I had misjudged the movie. I didn’t realize it was going to be quite so heavy like, “I can’t do this for the next 30 days.” It was terrifying. I was glad to have the next day off because I had a full day of going, “You have to adjust to this, pal.” I came out to the city on my off-day to see a buddy of mine going, “I don’t know if I can go back.” I was so used to being on New Girl for 2 years and doing the same thing in that environment, which was very safe and nothing like this. I obviously signed up for this: “Work through it.” [Laughs]

RITTER: You read a script and have an idea of all the characters, and then people get cast. We got to a point where we did all legitimately care about each other. There’s a scene where Aubrey’s [Plaza] on the bed with me asking, “Are you okay? Is there anything I can get you?” and all this stuff. When I said, “You have to stop asking me,” I saw tears spring to her eyes. I felt so loved and there was nothing in the script about that. We all bought into the reality of it and that helped immensely. Sometimes you can find yourself sort of spacing out, but whenever something like that happens, you look around and there are six other people in it.

Did some of you know each other prior to the shoot or were you sort of thrown into the house together?

GREENBERG: Some of us had met before and had known each other from this and that, but we all had this working attitude, which I needed so much on this film. I think the work would’ve gotten away from us if we didn’t do that. It was such a professional group.

GRACE: Likewise, that’s one of the big reasons I signed on for this. As much as I loved the script and meeting with Jesse [Zwick], you just never know what the other piece of the puzzle will be when you’re playing a married couple.

PARKER: Here’s a first-time director. He could’ve came in and said, “This is what we’re going to do—bitches.” [Laughs] But he was very upfront about being new to this. We would sit around a table like this, outside of it and objectively, just asking questions.

GRACE: He’s an incredibly thoughtful person and an old soul. I felt that he was very gifted in possessing those qualities. You only have a few days to forge these relationships before the rollercoaster reaches the apex and you’re off to the races. I heard directors say before when casting movies, “As much as it is about the characters, who would I want to go camping with?” I’ve started to think about that a lot in life. The ones that have become pruned are the ones where I ask myself, “If we’re going backpacking through Europe, is she going to pack a curling iron?” We’re probably not going to remain good friends.

RITTER: And although we did spend a lot of time together, I spent a lot of time alone. A lot of people would go back into the city every weekend and I would sort of stay behind even when no one else was there. I would stay up really late at night and sit with my solitude and loneliness. I loved it because that’s what I was going for with this character: someone thirstier for human connection than maybe the people around him are. But by the time everyone came back into town, I got so excited. I was like, “That’s what my real voice sounds like!” [Laughs]

Whom would you say is most like their character and vice versa?

GRACE: We haven’t gotten that one yet. Well, Max is nothing like his character.

PARKER: Nothing at all. I think he had the task of going from being so quick to being this hillbilly lumberjack, hating on everyone.

GRACE.: He’s not the misanthrope he seems.

PARKER: I think everyone’s very different from their characters. Everyone had to do something very differently on this one. We didn’t have an out because there’s an intimacy there that you can’t fake and those are the hardest kinds of films to make. It’s a coming-of-age story and you have to get it right, or it will get corny and fake in feeling.

Max, how much of what you can do in film is determined by what’s out there during your time off New Girl?

GREENBERG: I get 4 months off to do something else. A lot of what you do has to do with what’s available in terms of material. You’d be surprised because [in a hushed voice] there’s a lot of shit out there. I mean really terrible scripts…