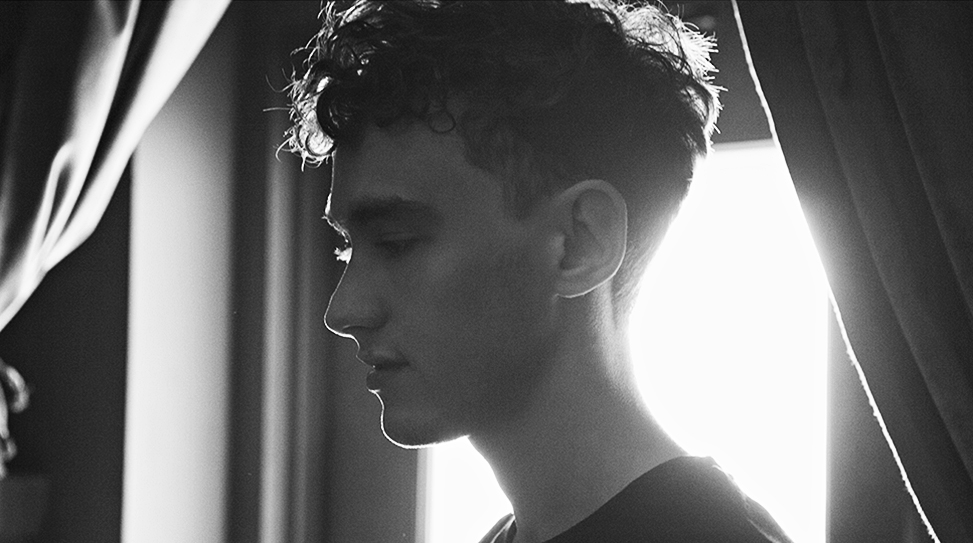 I can't actually articulate how much of an impact [Enter the Void] had on me. It was crazy. It was nuts.

In God Help the Girl, writer-director Stuart Murdoch tells a coming-of-age story that doubles as a twee musical. A decade in the making, Belle & Sebastian frontman’s Kickstarted brainchild is set in the bohemian fantasia of Glasgow’s West End populated by mods, rockers, and emo kids. Emily Browning is Eve, a would-be musician and inpatient recovering from anorexia, low on self-esteem but high on fantasy. Over the course of one summer she meets two similarly rootless souls, rich girl Cassie and bespectacled misfit James, and together they form a pop group.

Holding his own against Browning as James is Olly Alexander, the skinny, mop-headed actor with a slightly familiar baby face and goofball charm—he’s memorable, if not identifiable. In person, the 24-year-old is laid back and painfully modest for someone who’s making big, bouncy sneaker strides not only in film (Enter the Void, Skins, Penny Dreadful) but in music as Years & Years’ lead vocalist. By all reasonable measures, God Help the Girl marks his most ambitious role yet as he pulls triple duties: acting, singing, and strumming guitar in dreamy musical numbers.

Next up? The Riot Club opposite Sam Claflin and Funny Bunny in which he plays Titty, an emotionally arrested teen who sues his own father to win back his inheritance.

So I didn’t realize that you were also in this really cool band Years & Years. You guys are fairly new still, right?

Well, the perception is that we’re new. In fact, we’ve been together for nearly five years in some form or another. We’ve had different people in the band and the music has changed a lot, even since our first single “Traps”. We released that one on Kitsuné last year. We signed to Universal/Polydor this year in the UK. I now mostly just concentrate on music.

Do you want to continue investing your time in both worlds?

I know, like, Ariana Grande and Taylor Swift do both, but I’m not at that level quite yet? [Laughs] I find it hard doing just one thing even. I also want to be totally focused on music. Eventually I would really love to go about doing fucking great movies.

Your first film was Enter the Void.

That must’ve been a crazy experience. How did that come to you?

It was really random! I’d just gotten an agent and Gaspar [Noé] was doing a worldwide casting for that movie. They came to London looking for actors and I read for it. Originally, that character was meant to be really fat and older. I was 17. I think Gaspar was like, “hey, this kid’s weird.” I have no idea what happened, but it was literally that most insane experience of my life.

I can imagine. He’s a kooky guy. He’s obviously brilliant, and completely bonkers.

Oh yeah. I was so intimidated by this guy at first. I was studying French at school and one of my topics was French film. I chose him as one of my topics, so I was sort of starstruck when I met him. He has this crazy energy and I don’t think he ever sleeps. He drinks Red Bulls and stays up all night. He talks really fast and has this manic energy. You can’t really understand what he’s saying because he has such a thick, French accent. He’s a machine! But once I got to know him, he was really sweet and almost like a child. He likes to do silly things and shock people as well, which you can see in his movies. I don’t think it’s purely gratuitous. He likes to push the envelope. He’s not questioning his artistic process. We were shooting crazy hours, like, 6 p.m. to 6 a.m. He would camera operate, knock back some Red Bulls, go out and party for a few hours, bring people back to his hotel room…it was nuts! I’ve never made a movie like that and I’ll probably never again. It was wild. I wish I had more to talk about because people always ask me about this movie. I can’t actually articulate how much of an impact it had on me. It was crazy. It was nuts.

That’s one of the big perks of being an actor, right? This is obviously your craft, but it’s also so much about the experiences.

For me, it’s more the experiences. I didn’t train as an actor. In England, you’re kind of expected to get training. You’re expected to go to school and a lot of it is about the craft. I totally get that, but it’s about these wild experiences. Each movie is so different. You get to go to different countries and work with different kinds of people. You work on different stories in different settings. You just absorb these different pockets of insanity. It’s such a fortunate thing to go off and do, you know? It’s fun.

Is that one of the big factors to consider when you’re choosing new projects? Are you looking for something that’s completely different from what came before?

[Laughs] I wish I could say that was a factor! I literally take the movies that get offered to me. A couple of times I’ve had choices, but I’ve never been inundated with offers like that. People will ask me, “why so many weird, indie movies?” Because those were offered to me! It just happened that way, you know? Of course, I wanted things to be really different because you want variety. If one script is totally different from the last thing you did, you’ll more likely want to do it. I get asked that a lot, but the truth is, I never really had a plan. I’m just doing stuff that gets offered. I’ve auditioned for big HBO dramas and movies, but they never wanted me. I feel like there’s a reason for that, and maybe I don’t suit those kinds of things.

How did God Help the Girl come about?

It came through my agent. They had been casting for ages, like, years because the movie kept trying to get off the ground and the funding would fall through or whatever. When I first heard about this movie, I was too young to audition. I was 21 at the time—I still look young for my age—and they told me I’m too young. I was like, shit! I want to be in this movie… I was so jealous everyone was auditioning for it. It’s not often that you get a project like this where you know it’s one person’s artistic vision. I so respect Stuart [Murdoch]. A couple years went by and, for the audition, you had to read part of the script and perform a song to camera. Stuart told me that the reason I got the part was because I wrote my own song on a keyboard. He said that everyone else had done, like, guitar covers of Bob Dylan or David Bowie, trying to be all cool. Mine was this really pathetic, weird song that I’d written about a camping holiday. [Laughs] He said, “that’s something James would’ve done.”

Were you already a fan of Belle & Sebastian going into this?

I think I was at a friend’s party when I was maybe 14 and she played their song “I’m a Cuckoo”. I didn’t really know too much about their music before doing the movie, but I’d heard a few of their big songs and liked them a lot. I have so much respect for them. They’ve written so much material! It’s not easy to write an album and they’ve done eight now. So it was a real honor to be in some way involved in their world, you know?

Did you guys bond over music on set?

I think it was more me being like, tell me more about your cool musician life! [Laughs] Stuart is such a cool guy that he gets on with everyone. Hannah [Murray], Emily [Browning] and I got a train up together to Glasgow for first day of rehearsals, and we were totally band-girling over Belle & Sebastian. We were all such fans and it totally brought the three of us together.

What did you dream of becoming when you were little?

I really wanted to become a singer or a musician. I really haven’t watched that many movies. This is why I’m a bad actor. I have such bad movie references. You could name a movie and I wouldn’t have seen it. I just didn’t watch movies growing up. Wait, that sounds bad. I like a lot of Japanese anime movies and European movies. I really hated school because I was totally bullied. But you’re never bullied in drama class because the weird kids do well in drama class. That’s a safe place. That’s when I started to think, I like performing and singing and writing music. I just randomly got an agent when I was 16 because I had auditioned for Skins, which I didn’t end up doing until six years later. So there was this chain of events and I started working. All of a sudden I was an actor. It was never something I’d set my heart on being. I’m still trying to work it out.

I bet struggling actors hate hearing stories like that. The ones that are constantly pounding the pavement and things don’t go their way.

I know! I hate stories like that as well. You hear, “I just fell into it” and you’re like, come on! I guess it’s easy to say stuff like that in hindsight because things have happened for you. But yeah… It’s really bad, isn’t it? We can’t really make sense of life can we, Kee?

Don’t get all weird about it!

[Laughs] I really, really wanted to perform in some way because I love doing that. I’ve wanted to do it ever since I can remember I could walk. Obviously, I’ve been trying to aim at this goal. I think if you lock into it young enough, you have a better chance. Had I gone to school, came out at 21 and tried to audition for stuff, I don’t think I would’ve succeeded. I don’t have a natural bullish kind of confidence. I’m really bad at auditions. I don’t think I would’ve gotten anywhere.

Yes! But not in the US. It doesn’t come out here… It’s just UK, Europe and Australia. You can still listen to it though. We’ll do stuff here, but not now unfortunately.

How far along are you guys on the full-length album?

If you’d asked me that question three weeks ago even, I would’ve told you that it’ll never be finished. But actually, it’s looking like it’s almost half done. At times, it feels like it’s such a big mountain to climb making an album. You want it to be perfect and all that stuff. Most of the stuff is actually written, so it’s more about deciding what’s going to end up on the album. We’re touring, recording and writing at the same time, but it should be out by spring next year. I’m going to have an album! It’s amazing. I can’t believe I’m actually going to have an album. It’s nuts.