The actress on her sketch comedy background, compartimentalizing The Interview fallout, and Jason James’s Entanglement. 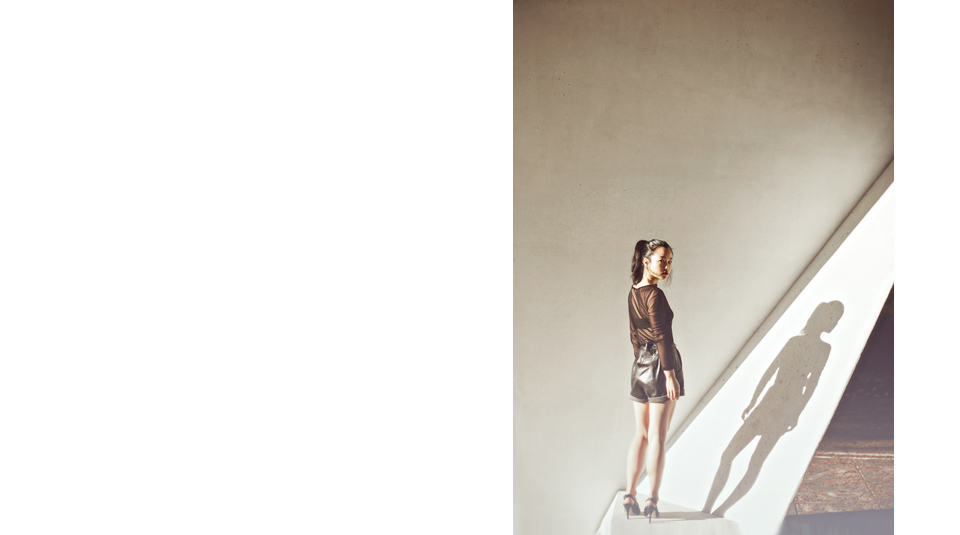 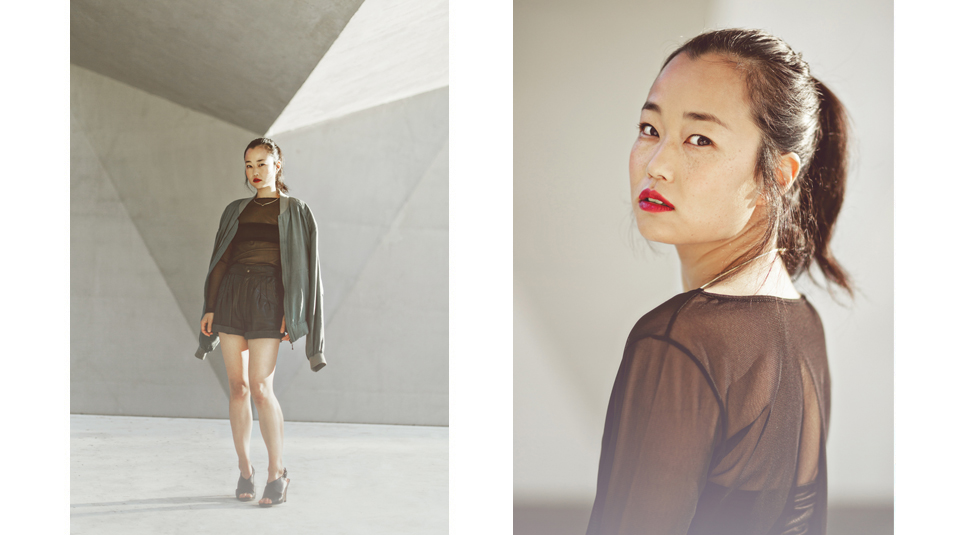 When The Interview came out and with that whole debacle—I guess I’m good at compartmentalizing.

You may have heard a thing or two about The Interview. The 2014 comedy was much more than just a movie. It’s been three years since a massive cyberattack hit Sony Pictures Entertainment, resulting in the leak of thousands of private—and embarrassing—emails, social security numbers, unreleased films, and a complete wipe of half the company’s network. Calling themselves the Guardians of Peace, the hackers are widely believed to have worked in at least some capacity with North Korea—the Hermit Kingdom thought to have been angered over its portrayal in the film.

When Seth Rogen and James Franco, playing a couple of media buffoons, killed Kim Jong-un in The Interview, it was easy to understand how, in North Korea’s jagged worldview, it could be considered a U.S.-sanctioned hostile act. That’s a no-brainer. To us, the real curiosity was always new-kid-on-the-block Diana Bang playing Sook, Kim Jong-un’s intelligence officer, a.k.a. propaganda minister. Was the Korean-Canadian actress worried? What did her parents think?

In 2018, Bang is exploring something quite different. Jason James’s Entanglement shadows Ben (Thomas Middleditch), a severely depressed individual. How depressed is he? The film begins with a montage of his failed suicide attempts. Fortunately, he meets Hanna (Jess Weixler) at the pharmacy while picking up his medication, and she slowly drags him out of his funk. Here’s the kicker, though: Hanna was at one point almost his sister. Thinking they couldn’t conceive, Ben’s parents had adopted an infant girl. But with Ben suddenly entering the picture, the adoption agency took Hanna back. If this all sounds a bit crazy, so thinks Tabby (Bang), Ben’s friendly neighbor who makes up most of his support circle and has serious reservations about his new dream girl.

Entanglement opens in select theaters, and via On Demand and Digital HD on February 9.

I checked out an interview with your director, Jason James, where he described Hanna as the chaos factor in Ben’s life in relation to Tabby’s control, which is grounding him in reality. I thought that was an interesting angle. The film is very conceptual in that way.

Yeah, and I think the script changed a little bit. Initially when I grasped it, it had much more of that chaos and control element. I think some of that was stripped from the final film. I don’t remember having an explicit conversation with Jason about that, but that was quite evident in the script.

The film’s portrayal of Tabby and Ben’s rough and tumble friendship is affecting. We often neglect friendships when we’re too busy working on our own personal details.

I do think it’s about friendship. I think it’s about self-love as well. Ben’s trying to figure out the journey that he’s on. When you talk about this chaos and control aspect, it’s also the fantasy version of himself versus a more realistic version. That’s sort of how I interpreted the characters of Hanna and Tabby. It’s about coming to terms with the different versions of himself and finally accepting himself in the end. I think’s that’s a universal story. It’s the journey that a lot of us travel sometime in our lives, or throughout our lives. With Tabby specifically, the cool thing about this particular film was that I got to play a girl who owns her own clothing shop. Most of the roles prior to this in which I had a substantial role, I had to have some kind of an Asian accent, or I was asked to. I guess what I related to here is that she’s a fuller character than anything else I ever played. In that way, it was definitely a nice thing to inhabit. And in talking about control, you definitely want to control the outcome of your life sometimes. I could definitely relate to that, for sure.

The film doesn’t fixate on Tabby’s Asianness at all. The character you play is devoid of stereotypes, which is always thrilling. It’s a clear contrast to your North Korean propaganda minister role in The Interview, which is obviously a very different brand of comedy. It’s farce in many ways. Did you find your experience on these two movies vastly different?

Honestly, they weren’t that different. It’s interesting because I come from sketch comedy and that’s my background. Obviously, I try to make my characters as human as possible, but sometimes I push it, too. Initially, when I was doing Entanglement, it was funny because Jason would sometimes come up to me like, “You know, just a little less.” [Laughs] “Just ground her a bit. Less.” Eventually, I figured it out and got the tone of it. But at the very beginning, it was sort of like Jason was trying to be as polite as possible: “Not so much energy. Tone it down.” In terms of the environments, they were pretty similar. I mean, one might have better catering or something like that, but overall, I found them to be quite similar. I guess with indie projects there are less luxuries, you know? But that stuff doesn’t really matter. That’s not important. For me, getting to be one of the leads or getting to be in a supporting role in both of those movies was nice. I was able to have more of a say and feel like I was part of the filmmaking process, more than just dropping in and being a barista with a few lines. But yeah, I felt like they were quite similar to be honest.

In 2016, there was a documentary called The Lovers and the Despot, which details Kim Jong-il’s 1978 abduction of a well-known South Korean actress and a filmmaker to boost the North Korean film industry. I ended up pulling out of interviewing the filmmakers because my mother freaked out a little bit. How did your parents react to you doing The Interview?

For me, going into The Interview, not really, just because it’s, like you were saying, a farce. It’s a comedy and the point was to skewer higher powers. I just thought it was kind of normal. I mean, we did joke about it on set and stuff like that. When the film came out and with that whole debacle—I guess I’m good at compartmentalizing. I also don’t think I was really that scared because I was in Vancouver. I felt like I was in a little bubble and away from where everything was happening. My mom, being my mom, was a little bit frightened for me like, “Um, are you going to be okay?” But it was fine. I felt removed enough so I was able to compartmentalize in that way.

There’s such an absence of Asian faces, as we’re all aware. It’s important to see you up there, and on TV also with Bates Motel and such. What kinds of stuff are you reading nowadays?

I read for a lot of TV, film—everything. But what I’m personally hoping for, and what I think is missing, are female Asian protagonists in comedy. There are female Asians in supporting roles playing the sidekick or the office mate or whatever, which is great in terms of visibility, but I think it would be nice to see protagonists that have the Asian female story and have other characters serve her story for once. I’m already going to be auditioning for that role of best friend to the lead woman in a comedy where the character description is like, “She’s very supportive of her friend and listens to all of her secrets,” and all of that stuff. I’m hoping for change and will try to push for it, whether that means pushing for that with my agent or trying to do it with my own writing. I come from comedy and I have yet to see an Asian female protagonist in that genre.

Are you still doing sketch comedy as part of Assaulted Fish? Amazing name, by the way.

[Laughs] Thanks. Yeah, we’re together, but we don’t perform a lot anymore. We’ve slowed down a lot over the years. We’re hoping to work on some videos for Internet consumption. None of us are doing it to get money or fame or anything. We do it because we like each other and we like working together. So we’ll be working on new stuff. It’ll come out slowly.

I read somewhere that you wanted to become a dancer first.

Yeah! I really do enjoy movement. In fact, last week, I took a week-long movement dance workshop. I mean, I’m not a dancer at all, but I do love movement. I think if I had taken dance classes when i was younger, I might’ve been a dancer before an actor.

You have Boundaries and Status Update on the horizon. What’s happening with those?

The next project is actually Master Cleanse, a little indie film I did with Johnny Galecki, directed by Bobby Miller. When I read that script, it reminded me of an indie, muted Gremlins. [Laughs] That comes out in May. I don’t know when Status Update is coming out, but that was fun because I got to play this really angry, weird principal that comes in to say strange things and then run off. I just went around and yelled. That was definitely more in line with The Interview because it was crazier. It was really fun. I haven’t heard that much about Boundaries so I can’t really comment.

I had the chance to speak with Michelle Yeoh recently and she was saying just how important it is for Asian audiences to show up for Asian-fronted films. Otherwise, people will think, “Nobody wants to watch that. Not even the Asians!” Would you care to comment?

Definitely. We all have to support each other. We have to watch and support the things we want to see more of. It is a political move to buy movie tickets for Asian-fronted movies. I do think about that. It’s something you have to think about in your daily life, too, because it’s the small things you can do. You can go on social media and support these movies. You can put your dollars towards other Asian artists and their stories. It’s definitely on my mind. There just has to be more. There’s so much more to mine. The stories are out there. There are Asian stories out there. There are Asian-Canadian stories out there. I remember watching Lady Bird like, “Where’s the Asian-North American version of this girl coming-of-age story?” Then there are so many different versions of that. If it’s something that I want to be a part of, I need to support other people doing that, too.