The accomplished illustrator invites us into his charming London studio on the eve of starting a new life chapter in Berlin. 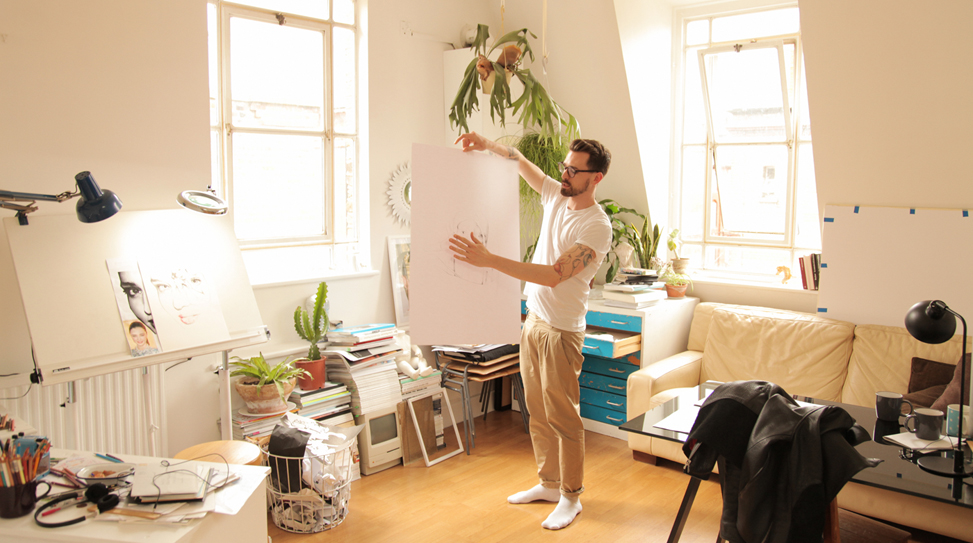 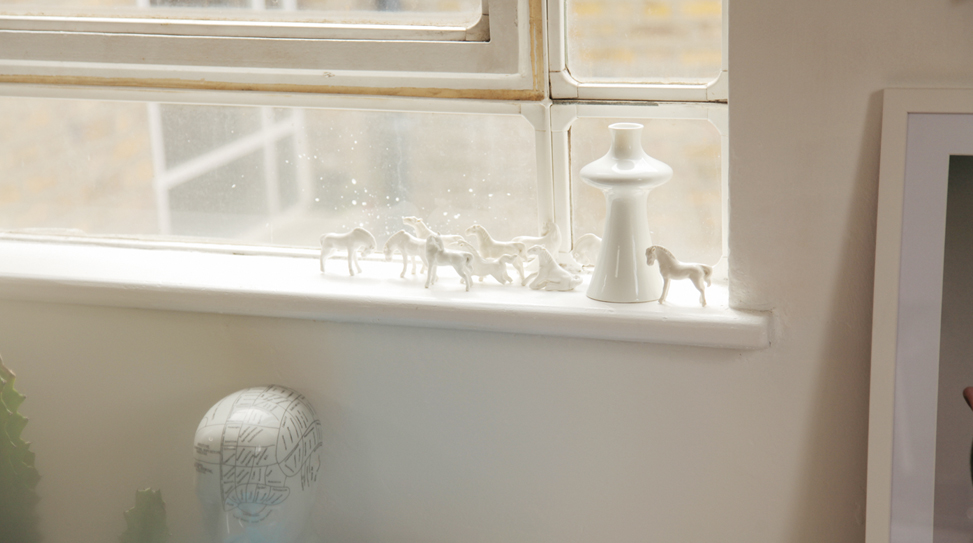 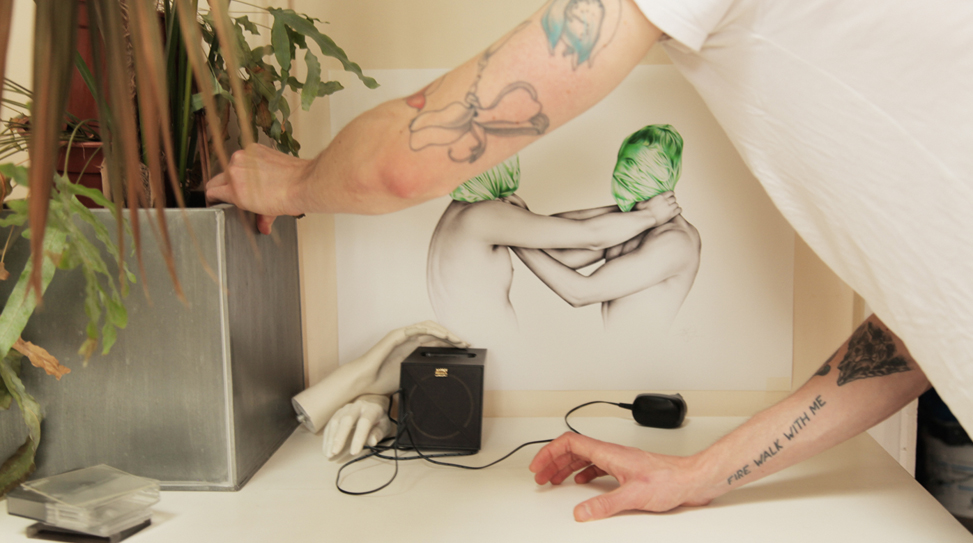 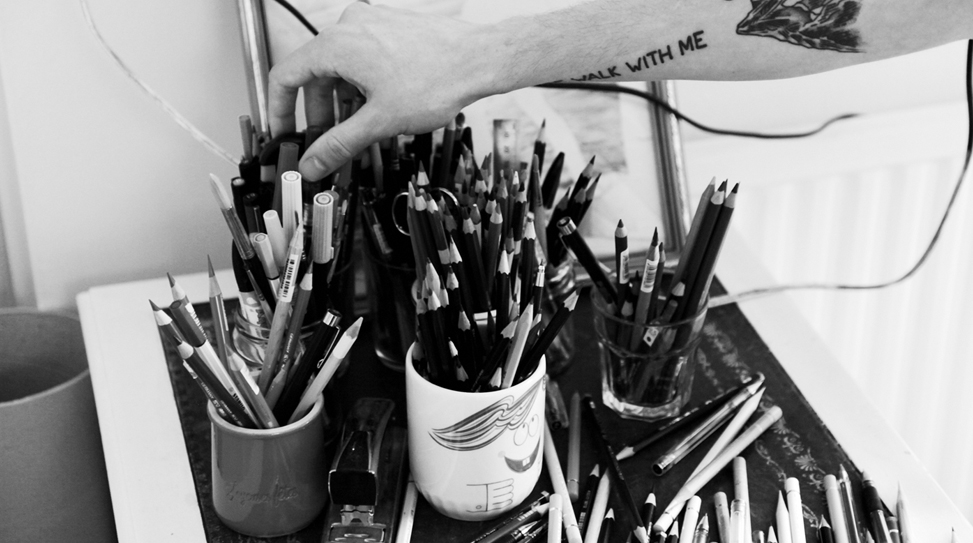 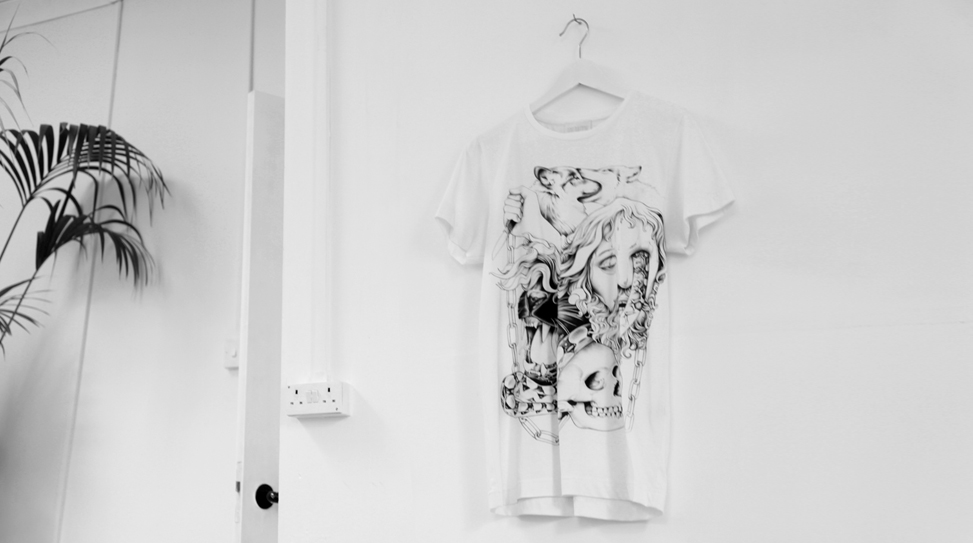 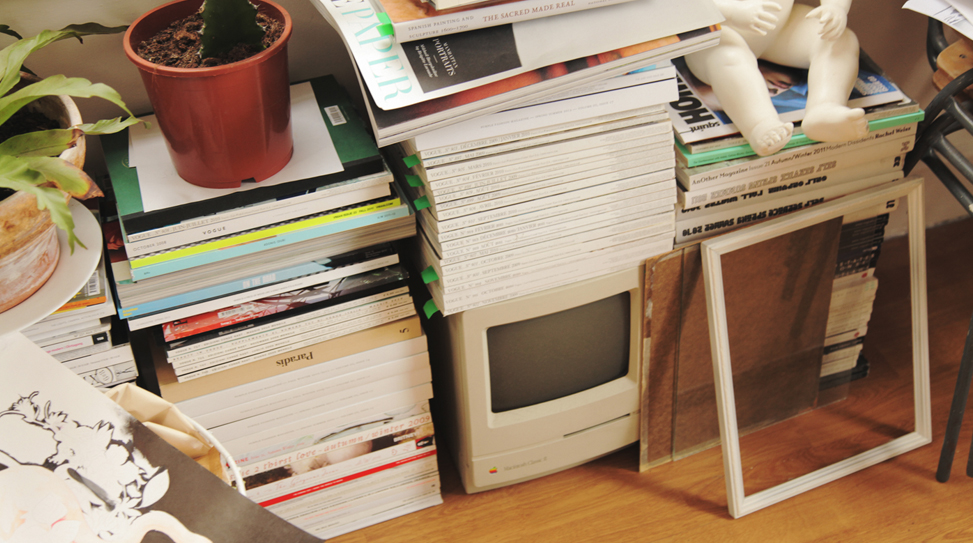 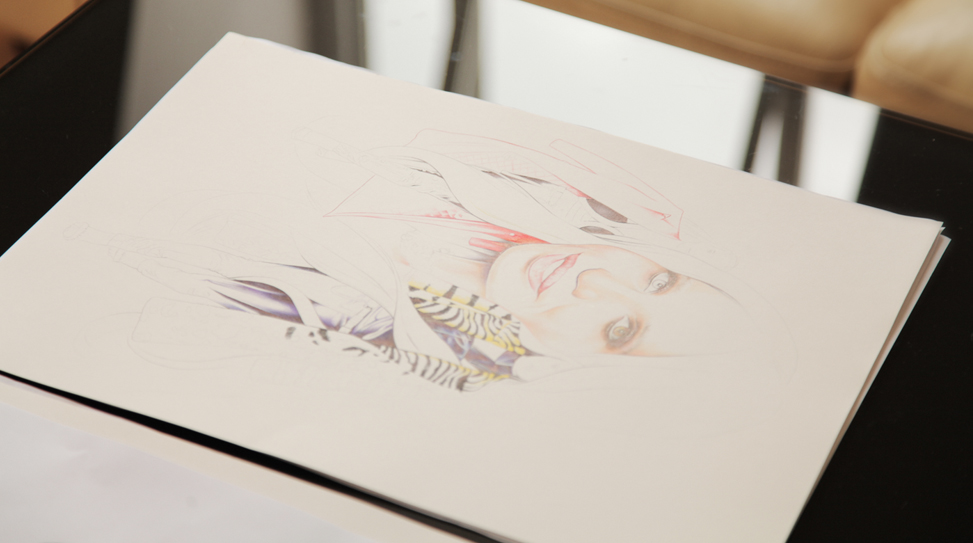 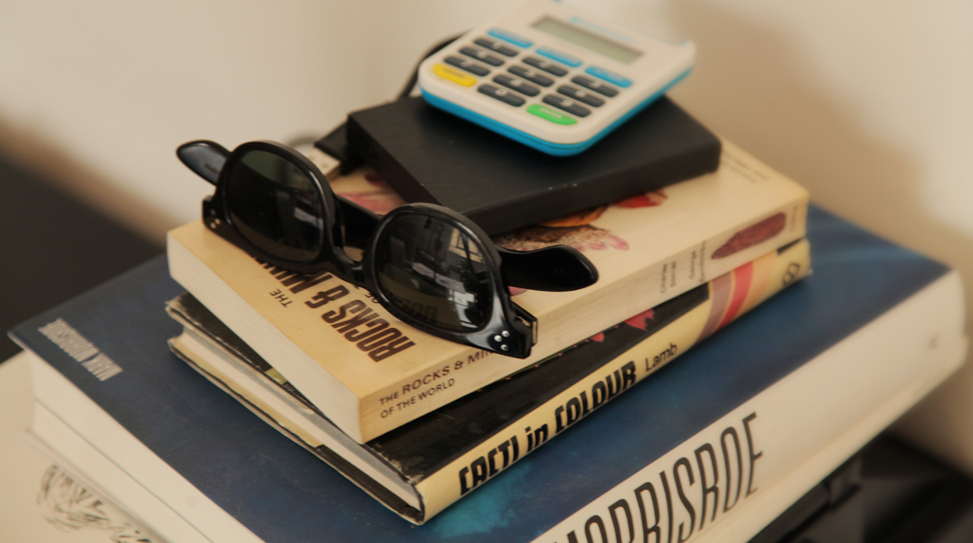 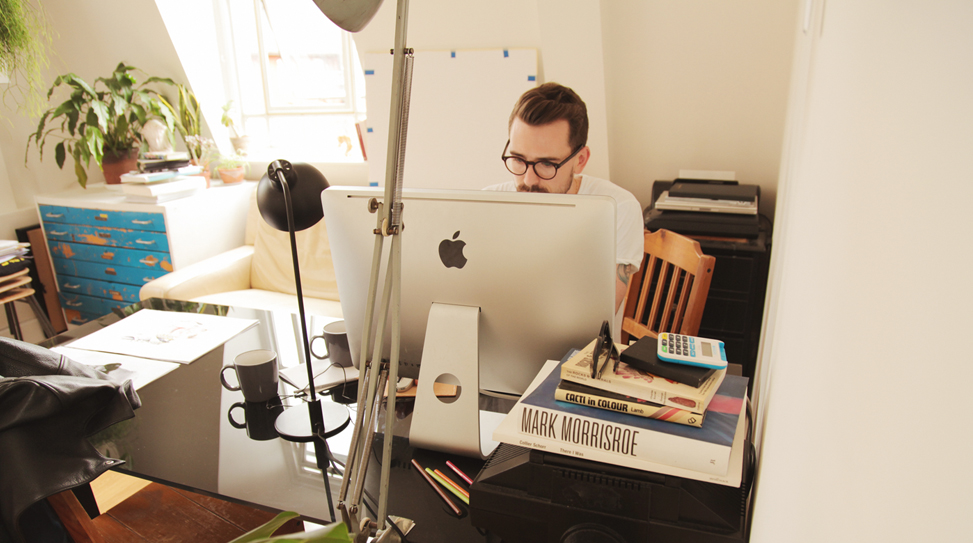 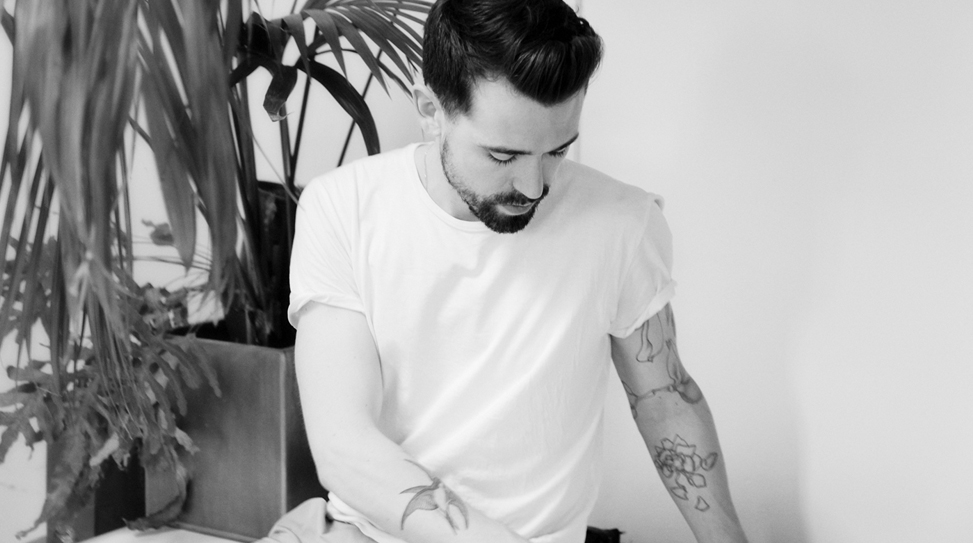 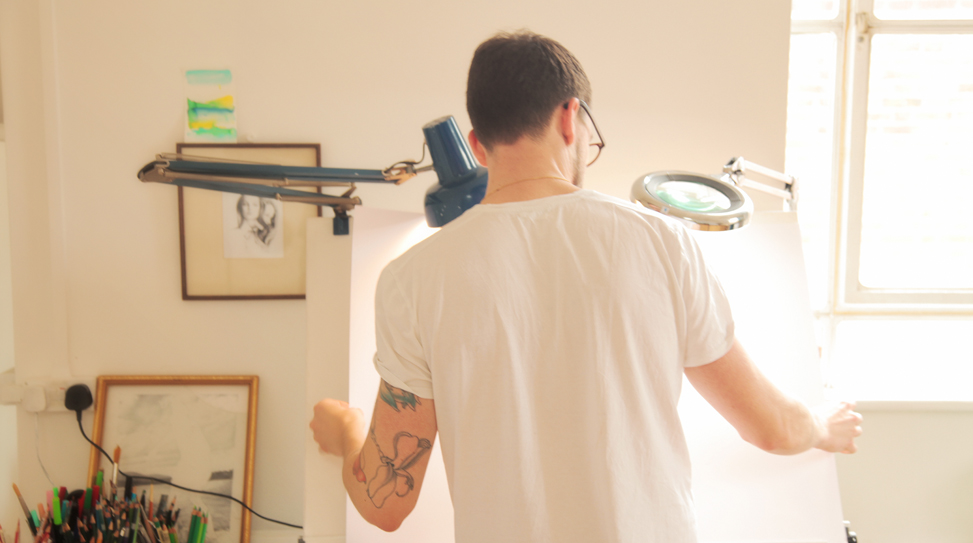 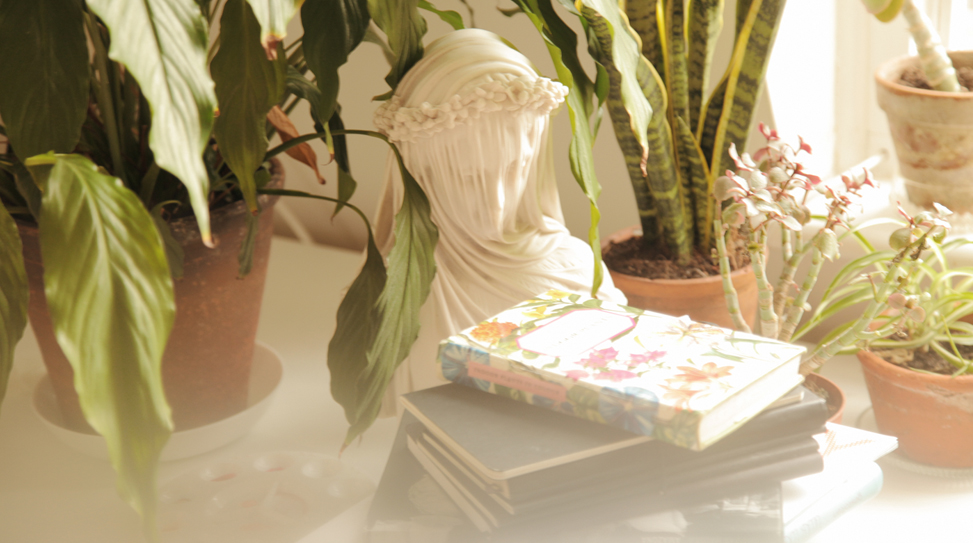 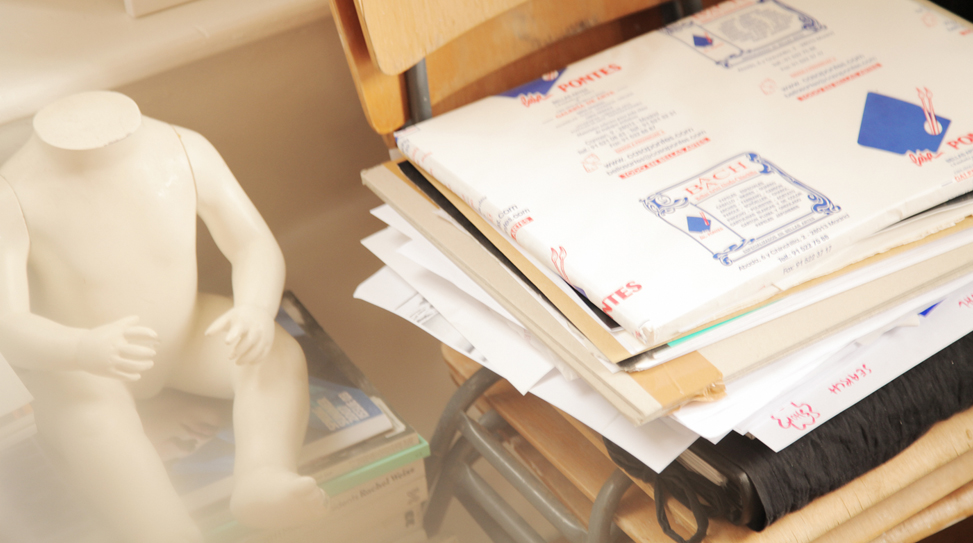 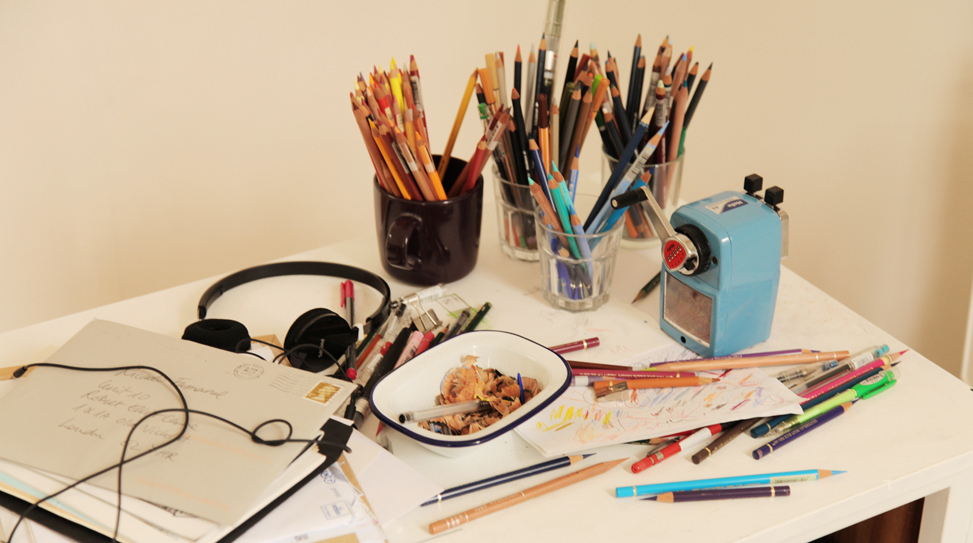 I grew up in a small town in Spain and there wasn't a lot going on. Drawing opened up a new world for me.

Since featuring Ricardo Fumanal’s work some five years ago, we have continued to follow his creative pursuits. In a digital age overrun by a long line of “shortcut” image manipulation software, this illustrator has continued to do what he does best with traditional tools at his fingertips. Pens, pencils, markers, ink, and watercolors are employed to fashion exquisite works of art that are as painstaking to realize as they are timeless. Over the years, his list of clients have only continued to expand to include such titans as Revlon, Vogue Hommes Japan, Marie Claire and GQ Style.

As he embarks on a new chapter of his life in Berlin in the coming weeks, Fumanal graciously opened the doors to his London studio to us. Here, we discuss his early years, his city-hopping lifestyle and what he would request that fortunetellers not do. Scroll through the gallery above to feast your eyes on his creative space and check out his work if you’re so inclined.

Although I’ve become quite familiar with your work over the years, I don’t know much about your background. How old were you when you started drawing?

I have been drawing on and off since I was a kid. I was probably 10 years old when I realized what I liked to draw. I wasn’t that interested in it when I was a teenager, but after high school, I started drawing again. I spent the first couple of years working on graphic design collaborations. Now, I’ve been illustrating professionally for 8 years.

Did you enjoy drawing right away? What kind of stuff were you drawing as a kid?

I think I liked the freedom of drawing right away. I grew up in a small town in Spain and there wasn’t a lot going on. Drawing opened up a new world for me. I used to draw shoes, girls and vegetables… It’s weird that I’m still drawing all of those things, but I’ve added boys, bottles, bags and lots of hair.

What did you study formally in school?

I wasn’t entirely aware that the drawing I did as a hobby could pay the bills and be considered a career choice, so it wasn’t easy deciding what to study after high school. But I knew it needed to be something in the arts. I ultimately enrolled in a graphic design course at a college in Lleida, a small city near Barcelona. I went there for two years and just started from there. School is great, but I really needed to just jump in and do it.

You’ve traveled quite extensively. Do you travel mostly for work or for pleasure?

I don’t travel as much as I’d like to, but since living in London, I’ve been able to escape a couple of times to other destinations besides Spain, which I go to regularly. When I plan a trip, I try to coordinate it with meeting clients and friends. Most of the trips have been for work. In a few weeks I’ll be moving to Berlin, but London has been my base for the past four years. I love London. I live just east of where there’s always something going on. It’s alive with so many different cultures. The street culture and the people here really go for it. It’s always fun to see. It’s quite a dynamic city in that you can do something different every night if so desired. It can also be quite a hard city, but if it were too easy, it would be boring. Boring is something London is not.

What are some other cities that you’ve lived in?

I also lived in Barcelona and Madrid. I’ve loved and had a great experience in all of them. Living in these places has been a big influence on how I live my life and, in turn, how my work has developed. And to be honest, as great as these places are, it’s really about the people. I’ve made some really great friends. Berlin is next and then I’m not sure… New York would be great.

What would we find in your tool bag? What are some essential items?

I hope that bag is big. I drive myself crazy with the right paper so I typically have many different types. The bag would have a printer, light box, pencils, loads of colored pencils, lots of Pilot 0.4 pens, cutting blades, a computer… The list goes on and on. Do you have another bag?

Lately I’ve been doing loads of portraits, mostly for press, and although I love doing portraits, I’m getting a little bit bored. I like drawing what I think is beautiful, so when a client asks for specific objects to be included in an illustration, it can get tricky. I don’t like to draw anything with too many straight lines like buildings or at least buildings with straight lines… I wish I had more time to work on my own stuff because I get to be a little crazier with my subject matter.

When you draw objects that are in front of you, do you take a picture of it first?

My work generally isn’t about drawing objects in front of me like a still life. I do a lot of research and the work develops through found images. I play with them through collage until I have assembled something that feels right and then I work off of that.

You’re commissioned by some big clients out there. What surprises you?

I suppose the most surprising thing about working for a magazine is the budgets! There’s none or very little, at least for a contributing illustrator. I understand that there’s limited budgets for everyone who contributes, but it was a surprise and a shock when I started working with magazines. At the same time, you’re given more creative freedom there.

What kind of parameters are you normally given on a commissioned project?

It really depends on the client. They give you some parameters, I interpret it, and we go from there. Once I’ve worked with a client a few times, they trust me and give me more freedom, which is always great. Sometimes they know exactly what they want and I have no leeway, which makes it difficult. But generally, I’m given an idea and I just go with it.

Your illustrations seem labor intensive. What has been the most consuming project?

There was a 25 illustration series for TSUM, the luxury department store in Moscow. It was a bit too much. It took forever and by the end of it, I wanted to pull my fingernails out. I didn’t.

As intricate as your illustrations are, it’s so much about how much you don’t show. You use a lot of negative space and details are left out. How do you balance that in your work?

That’s a balance that can get tricky. I know from experience when I had gone too far and when I didn’t go far enough. I usually step away from a work in progress to get proper perspective and with that, I know when it feels finished. Leaving something to the imagination is important.

You seldom use color, but they are vibrant and in-your-face when you do. How do you decide when to play that card?

Years ago, my work was just black and white. It’s when clients started asking for some color that I began using it. I’ve been adding more color since then and I’ve been really feeling it lately. I guess you could say that I’m having a colorful period in my work.

What has been inspiring you these days? I’ll leave that question very broad.

What inspires me now is a lot of what has been inspiring me for a while like fashion, fashion photography and everything in between, even castings and catwalks. I love looking at books on botany, crystals and contemporary art. Also, seeing art at galleries and museums supply a lot. There’s an overall source of information that comes from my relationships with friends and life that goes on around me. It’s a general mood that translates into my work when looking back at it.

Who are some of your favorite artists at the moment, be it illustrators, filmmakers, musicians and/or designers?

I’ve been doing a series of portraits for V magazine and I’m collaborating on Julia Restoin Roitfeld’s site, Rommy and the Bunnies. There’s always something interesting to work on and I hope the future brings a lot more. Recently, after years of not working with oil paints, I’ve picked them up again, which should be entertaining.

Let’s say you go to see a fortuneteller who comes highly recommended and supposedly has a 99% accuracy rate. What’s the best and the worst thing this person could tell you?

Knowing the future is probably the worst thing to revel in. The best thing would be if the fortuneteller didn’t revealing anything.