Let’s get this out of the way: Elizabeth “Lizzie” Olsen is the youngest Olsen sister (yes, that Olsen). But make the mistake of comparing the 21-year-old NYU senior to her larger-than-life siblings, and you’ll likely meet an unwanted finger-wagging challenge. She never set out to become an entrepreneur, you see. She wants us to know [...] 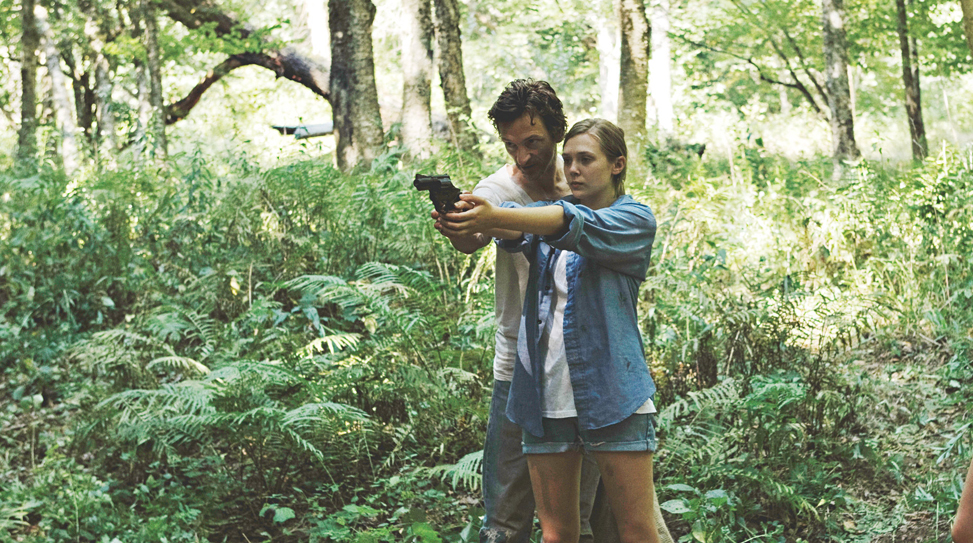 Let’s get this out of the way: Elizabeth “Lizzie” Olsen is the youngest Olsen sister (yes, that Olsen). But make the mistake of comparing the 21-year-old NYU senior to her larger-than-life siblings, and you’ll likely meet an unwanted finger-wagging challenge. She never set out to become an entrepreneur, you see. She wants us to know that her commitment to acting is honest, if not a compulsion. And Lizzie did just that at Sundance when she exploded onto the scene boasting some major acting chops—one that directors will clamor to stake their careers on from here on out.

Following the premiere of Sean Durkin’s Martha Marcy May Marlene, a psychological thriller about a young woman who reunites with her estranged older sister after escaping a cult, festivalgoers unanimously propped Lizzie up as the definitive It girl of Sundance. In addition to that film, she garnered considerable praise for her role in Chris Kentis and Laura Lau’s The Silent House (the remake of a Uruguayan horror film), which was shot in a single, continuous take for its 86-minute duration.

Now, Lizzie has even bigger projects lined up in which to show critics and skeptics just how serious she is about acting. Next up: Peace, Love and Misunderstanging starring opposite Jane Fonda, and Red Lights with Robert DeNiro.

Anthem sat down with the newcomer to discuss her two debut films at Sundance.

I’ve been told that you’ve been feeling a little sick.

Yeah! The ironic thing is that I went to Salt Lake City last night to screen Martha Marcy May Marlene with Sean and do a Q&A, and on our drive back, my left ear wouldn’t pop from the altitude. So now I have this crazy pressure in my ear! [Laughs] There’s an infection, which sucks. It’s such a bummer.

I’m sorry to hear that. So, you’re obviously the talk of the festival this year. After all the hype in the media, I was so relieved to watch Martha Marcy May Marlene and discover that you are in fact this über-talented actress! The whole name association thing is quite silly.

Thank you so much!

I guess you’re very much the Jennifer Lawrence of Sundance this year.

Winter’s Bone is so amazing.

You have two films at Sundance: Martha Marcy May Marlene and The Silent House. You sort of crept out of nowhere and made this huge impact at the festival. Why did you choose these two particular films as your first projects?

Actually, the first film that I shot was called Peace, Love, and Misunderstanding—I think they just finished editing that like a month ago or something. While I was working on that, I was reading scripts and auditioning on Mondays and Tuesdays. We were filming upstate, so I would come into the city and audition like 4 or 5 times a day on my off days. Martha Marcy May Marlene was one of the scripts that I read during that time and I was totally obsessed with it. The character that Sean wrote was challenging, beautiful, and I felt like I totally understood her. I could also visualize it as being this stunning film. It’s disturbing, but I think it’s a very special film. When I auditioned for it, Sean and I got along great, so this all sort of came together very naturally. I actually auditioned for The Silent House during the same time. That role was a challenge for different reasons. It kind of reminds me of this theatrical event happening on screen. So, one is more character-driven while the other one is more about pulling it off in one continuous take, I guess. When you fear for your life for an hour and a half, there are so many different stages of fear that you have to go through. You don’t want to be repetitive and you also try to be as honest as possible, you know? Experiencing something in real time is completely unique and that was something cool for me to try out.

That does sound challenging, just holding that fear for such a long time. It’s not like you can yell, “Cut!” and get a sneeze in, either.

[Laughs] It was an exhausting shoot. But in hindsight, it was unbelievable.

Going back to your role in Martha Marcy May Marlene, it dawned on me pretty quickly while I was watching the film that it’d take a certain bold actress to really pull it off because it’s such an emotionally complicated character. There’s a lot of trauma brewing beneath the surface and you have to convey a lot without saying much due to the film’s sparse dialogue.

Right. Were there any hesitations on your part in taking on this role?

Well, in terms of the subject matter, I find psychologically complex people really interesting. I’m interested in people who suffer from paranoia. I never felt more uncomfortable watching a movie than when I saw A Beautiful Mind. [Laughs] It’s so heart wrenching to see someone struggling with a mental illness like that. But I never really thought of my character as having a mental illness. I guess it’s more about questioning whether what you believe what you’re seeing, hearing, and thinking are the same for the people around you because if it’s not, that can be really humiliating and embarrassing—it’s the kind of stuff that makes people retreat into themselves. I just thought that was an amazing experience that I got to have.

In terms of the nudity, I do think that, as an actor, if it’s something that serves the film—I think you’ll agree that it’s really not gratuitous in this film and it does serve a huge purpose—I’m okay with it. It has a lot of impact that this character is devoid of an understanding of her sexuality, nudity, and things of that nature. As a person, I myself am quite reserved. I don’t think I’ve ever worn a push-up bra! [Laughs] I just considered myself an actor serving the intentions of the script.

And what did your parents make of all of this? Did they take the news well?

My dad actually wanted to visit the set while we were filming and I told him that he couldn’t. He was like, “Liz. Is there nudity?” I said, “Yes, Dad.” He asked me if this was a good idea, and I was like, “Yes, Dad.” [Laughs] He also asked me, “Can I not see this movie?” I told him, “Well, anytime that there’s any kissing going on, just close your eyes right then.” [Laughs] I don’t think any father wants their daughter to be nude under any circumstances! But he also doesn’t think of me as being this wild child, so I think he trusted that I was making the right decision.

What was your collaborative process like with Sean on this film?

I totally understood his intentions for the film and he totally trusted me with my intentions for the character. What he wrote on the page was exactly what I wanted to do. He said something like, “If something doesn’t feel right with the words, feel free to change it.” But I always felt like if I changed anything, it would sound stupid. The way that I asked him to treat me was to be straight-up front with me and tell me if I’m not being truthful to the character or if I had this bad habit or something. I just wanted him to be completely honest with me the whole time because that’s so much better than someone just trying to dance around the subject. Sean was incredibly straightforward with me because I asked him to be. In person, I’m not so sensitive so that helped a lot. At a certain point when we were at the lake house—I think it was a few days into the lake house shoot—we were talking about something, and he goes, “No, you just do it. I trust you. You know your character.” And he’s one of my good friends now. We were really on the same page with each other the whole time.

When films normally portray cults or cult members, they always turn out to be these horrible two-dimensional caricatures. Sean was able to paint these really honest portraits of human beings who just so happen to be in a cult.

One scene that still lingers in my mind is where you’re standing at the top of the stairs looking down at your pregnant sister, and you tell her, “You’re going to be a horrible mother.” I actually heard gasps in the theater when you said that. But even when you cross the line like that, we see it as a symptom of this trauma instead of judging you with anger. That was such a powerful moment.

[Laughs] That’s amazing! That was actually a really rough night of filming because it was so technical and we were just trying to figure out what the right tone would be as well. It was always a process. Even in rehearsals, we never tried to nail anything down because then that would be a waste of a shot, you know? So that night, we were just really trying to figure out what was happening in the scene. Another really difficult scene was the party scene where you have all of these extras that you don’t know. My character has this huge breakdown in that scene and these people were all strangers to me. They’re talking to you in-between takes and asking questions and it’s like, “I can’t talk you right now. I’m sorry!” [Laughs] But Sean really gave me space when I needed space and then he’d be like, “Lizzie, this is a five minute warning.” The whole thing was handled with care and we all took care of each other.

I noticed that you have extensive training in theatre as well. Do you prefer theatre over film or vice versa?

It’s so funny because in theatre, it’s all about instant gratification. You have so many chances in which to play things differently every night. So I try to create that same feeling in every single take, you know? In films, you just have to wait; you just wait and wait and it’s in someone else’s hands. Films are a director’s medium, but theatre is an actor’s medium. They’re just very different. I love them both.

With theatre, it does seems like actors might have a more direct relationship with the audience because you can see in real time where you’re connecting with them and where you’re not.