A Conversation with James Norton

The actor on unpacking a destructive personality, why he would be a “shit” real-life spy, and those speculations about the next 007. 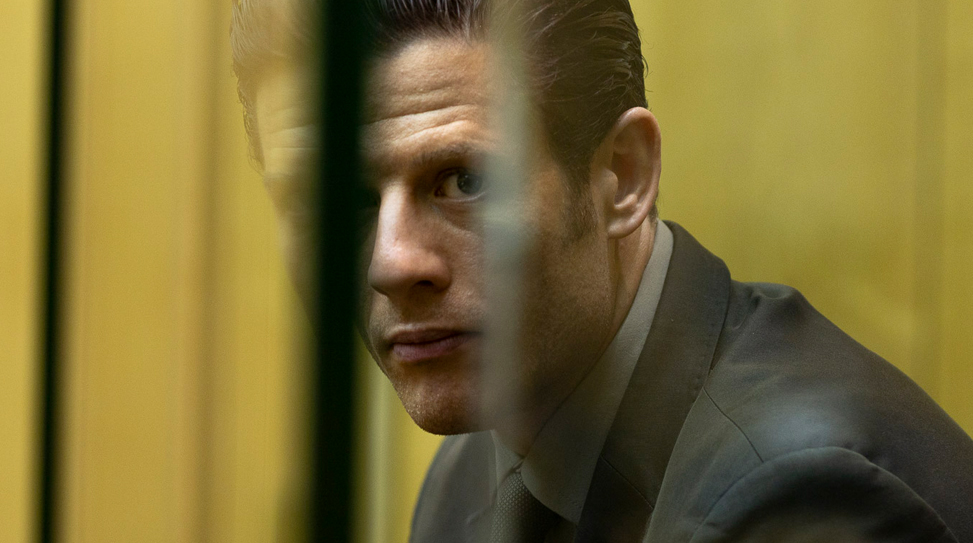 I think actors always say this: you have to find empathy for the love of your character—to a certain extent. And I think for me that was just pain.

Adam Patternson and Declan Lawn’s Rogue Agent—in collaboration with producer Michael Bronner, on whose unpublished article, “Chasing Agent Freegard,” their movie is based—is the true story of a conman who leveraged his alleged spy credentials towards less than savory ends.

In the early ‘90s, the British government recruited spies to infiltrate the Irish Republican Army (IRA) and inform on their terrorist bombing campaign. At this time, Robert Freegard was a barman and car salesman who was able to con his victims while masquerading as an undercover MI5 agent, claiming that they were in danger of being assassinated by the IRA. After he had won them over, he would separate them from their families and friends, and employ more tactics to extort huge sums of money out of them. In the film, James Norton plays the diabolical swindler who might finally gets his comeuppance, having met his match in a woman who refuses to be victimized.

Freegard, under the alias Robert Hansen and working at a luxury car dealership, approaches Alice Archer (Gemma Arterton), a successful litigator in London, on her morning commute. She is initially skeptical about his advances, but drops her misgivings, taken in by his goofy charm. And theirs would be a blissful romance were it not for the fact that a private investigator Alice hires can’t find anything on this guy. “He’s a ghost,” she’s told. It’d be enough to make any person worry, which is why she’s blindsided when he confesses he’s a spy. As a cover story, it is airtight. It might explain his absences and his caginess. She’s also swept off her feet by his air of intrigue.

Ultimately, he overreaches, snookering a woman as savvy as Alice, who’s now on a mission of her own to get to the truth. With a scoundrel like Freegard—and the impressive English actor—at its center, the story of his downfall at the hands of a heartbroken but driven woman is enthralling.

Rogue Agent arrives in select theaters and on AMC+ on August 12th.

Hi, James. How are you doing today?

I’m good, thank you! It’s cooled down. We were in like sweltering heat-wave heat, but now it’s a little bit more—what’s the word? Temperate. So it’s nice.

I had to take a break from the Italian climate myself. Incidentally, I went to the zoo today here in Copenhagen and saw a leopard pacing in its cage. Robert Freegard came to mind.

This is quite a role to play, James. He’s complicated. How did you go about unpacking him?

This is the important central question, which everyone’s sort of asking and which we asked ourselves multiple times. It’s the big why. Why is he the way he is? What is his fuel? And the film doesn’t really delve too deeply into that. There was a lot of information that preceded the movie and some of it was about his childhood. It’s him sort of sitting in class saying, “I’m gonna be something great. I’m gonna be important.” He was obsessed with film stars and superheroes and wanted to be James Bond, and yet didn’t have maybe the kind of intellect or the focus to back that up. And when someone is that destructive and able to warp their own moral compass to that extent, it always feels like there’s some deep sadness and a lack. If you’re able to cause that much pain, then surely you’re lacking something so fundamental and riddled with self-hate. That’s not to condone his actions and I would never want to do that for the victims’ sakes, but I think actors always say this: you have to find empathy for the love of your character—to a certain extent. And I think for me that was just pain. What’s he running away from? What’s he lacking, which in his head justifies this insane amount of cruelty? And this was all speculation. I mean, some of it was based in truth and the research we did on his earlier life, but most of it was private for me and the filmmakers, as opposed to putting it in the story, because we really wanted the audience to go on that journey for themselves.

I found it telling that Rob would spit at his own reflection in the mirror in one scene. He’s clearly disgusted with himself in that moment. That humanized him in a way because it’s like, at least he’s self-aware about the monster he’s become. And I’d guess you find a way to humanize him anyway without such a scene, as with all the characters that you play. As you say, you find empathy for the love of your character.

Yeah, and the spitting came out of an impulsive mind. We’ve seen the sort of smashing of the mirror, like in Nightcrawler with Jake Gyllenhaal. Not that it’s the wrong choice, but I think it was less about violence and aggression towards himself. It was more, as you say, about disgust. I think at that point in the movie, he lives for control, his income, and his raison d’être—everything is about this house of cards of delusion that he builds. Then slowly, that strips away when he realizes that, when he looks in the mirror, there is nothing. There is just a void. A dark shadow.

As the story goes on, we question absolutely everything he says and does, and one thing that remains a bit of a question mark is whether he loved Alice like he says he did. Despite the ultimate betrayal, could he have at one point loved her? What can we know for certain?

That was something we really talked a lot about, and with Gemma [Arterton], who’s such a wonderful actress that she was generous and had so much to say about it, too. I think for them both, that was the closest they ever came to loving someone. The woman who the Alice character was based on definitely talked about having had a very ferocious, liberating love affair with Freegard. I think it was important for us to paint that first section of the movie where it feels like a romcom, like a love story, so that when it fell apart, we really felt what that had cost them.

You recently answered some quick-fire questions for The Guardian, revealing that the trait you most deplore in others is selfishness. So, that’s Rob. What are his redeeming qualities?

[laughs] This isn’t a redeeming quality, but it’s certainly a kind of impressive quality. There’s a line in the movie about how everyone has a story they wanna be told, and that was kind of what we kept returning to: this idea that Freegard, however adept he was as a student or as a barman or a car salesman, has this incredible power of ascertaining what it is that people want and then using it against them. He would be a brilliant therapist if he was putting his power to the right end ‘cause he’d be like, “Listen, I think this is what maybe you are struggling with.” But put in the wrong hands—his hands—he’s able to use that against his victims and then essentially ruin their lives and steal all their money. So there is something kind of impressive about that. Also, something that was really fun to play with was the charm element. It’s so powerful, so self-assured, but it also came more from a nuanced space than from like a swashbuckling hero, you know? I really fought for a peculiarity—a disarming, slightly off-kilter, slightly gauche thing—so that when the leopard turns up, it’s just so weird. Alice has that line: “You’re so fucking random.” I think that was, again, not redeeming as such, but disarming and peculiar and genuinely comes from a vulnerable, slightly gauche place, where he’s actually a bit of a loser. And that’s, therefore, what makes him quite likable. Unfortunately, that likability and that appeal is then, again, used against the victims.

I find unflappability impresssive on a person. It’s certainly great for a conman, not to mention spies, even if that was nothing more than a facade in the end for Rob. Do you think you might make for a good spy, James?

[laughs] Do you ever have that thing where you’re trying to remember an account number and you’re trying to flick between the invoice and your bank app? You’re like, “Can I memorize seven numbers in a row just long enough to get this done?” And I just can’t. I get the first four and I’m like, “Ah!” Every single time, it’s like, “I’d be a shit spy.” The idea of memorizing a number plate or a name, and my spelling is just so bad… I get back to the headquarters like, “I think the registration was that there might have been an L in it?” I think I would enjoy the performance element of it where it taps into a kind of character.

Yeah, I was gonna say.

I used to do more immersive, site-specific theatre where you take a character around a room and it’s not sort of constrained to a stage. It’s more interactive. That was always really fun, and quite humbling to be a character in a one-on-one environment, holding that character and not feeling any kind of embarrassment or shame and just going, “I am here.” I always found that to be a challenge that I sort of relished so that element I think I’d be up for.

The film talks about hiding in plain sight. An actor who’s also a spy would be unexpected.

It would, it would. I actually went and did a talk at MI6 recently. Well, not a talk, but I voiced a documentary. There was a little part of me going, “Are they gonna recruit me? Am I gonna be the only actor who’s also a spy?” That would be amazing, but it didn’t happen. Or maybe it did…

English actors of a certain type get roped into rumors concerning the next 007. Is there some fun to be had with that kind of speculation? It doesn’t concern any personal matters at least.

No, no, no, no, no. I think that’s the way to look at it. It’s kind of been fun. It’s sort of bemusing and a bit baffling. I think it’s dangerous to think too much about it and lean too much into it. Let the journalists and the tabloid press speculate and run their stories. It’s based on nothing and it’s just clickbait. The public, particularly in the UK, love speculating on the next Bond. Being in that conversation, I just allowed my 16-year-old self to be like, “What the fuck? How are you even part of that conversation?” [laughs] So that’s gratifying, but beyond that, it’s just silly and fun. There was actually a line in Rogue Agent where he’s on the riverbank, where Alice says, “Do you carry a gun?” Originally, the script was, “No, I’m not James Bond. That’s ridiculous.” So we did toy with the idea, but I—luckily, also being a producer—said, “Let’s take that line out.” We stuck with, “It’s not the movies,” which is a bit more oblique. We didn’t wanna fan that flame, you know? So it’s just kind of fun and silly and all based on total hot air and nonsense.