A Conversation with Jon Hamm

The actor on Top Gun: Maverick’s staying power, the stalled Alpha Gang movie, and jolting the Fletch franchise back to life. 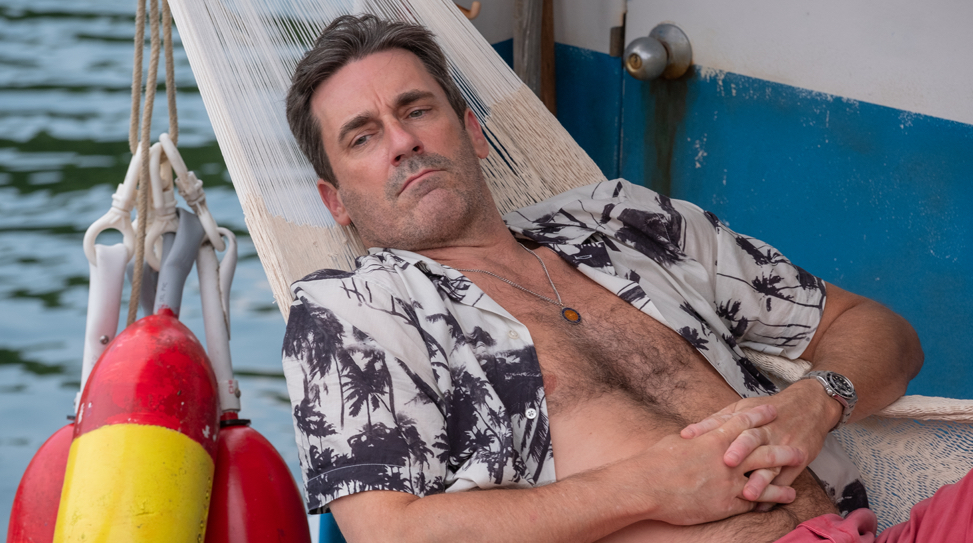 I’m a big believer in putting your heart and soul into whatever you do. That’s the operating principal under which I choose the projects that I wanna work on.

Almost half a century after Gregory Mcdonald first introduced the world to Irwin M. Fletcher in a series of novels, and almost four decades since Chevy Chase portrayed the wise-cracking investigative journalist with a knack for botching criminal investigations in the 1985 classic Fletch, the beloved character gets a Hollywood dust-off in Greg Mottola’s reboot Confess, Fletch.

When the original film was released, it was considered a decent-sized hit. But it was over the subsequent decades that the film achieved cult status among comedians and comedy buffs, who would parrot the character’s endless bon mots. That film’s core appeal lies squarely with Chase’s droll depiction of a hero who relies not on superhero powers, or even a gun, but his wits alone.

And it’s not that no one’s tried to revive Fletch in the intervening years. It’s been a long and winding road to a reboot, after a number of failed efforts to bring the character back to the big screen. Multiple potential reboots languished in development hell with at least four studios attempting to revitalize the cult franchise—the 1985 film spawned a far less beloved sequel in 1989 called Fletch Lives—and Ben Affleck, Ryan Reynolds, Jason Sudeikis, Jason Lee, Zach Braff, and Joshua Jackson were approached to play Fletch at one time or another. Kevin Smith’s own desire to make a third Fletch film—a dream project—dates back to 1997. Now, Jon Hamm has finally broken that so-called curse, not only playing Fletch but serving as the film’s producer.

Based on Mcdonald’s second book of the same name, Confess, Fletch finds ‘ol Fletch in a heap of trouble. Now a semi-retired reporter residing in Europe and writing about far less dangerous subjects like art, travel and lifestyle, he’s hired to investigate when millions of dollars worth of art goes missing from a count’s villa in Rome. He travels back to Boston to research the case, only to discover a dead body in his Airbnb rental. Fletch must now find the stolen art—enduring a series of mishaps and hijinks along the way—and also clear his name of the murder charge against him.

Confess, Fletch hits theaters, On Digital, and On Demand on September 16th.

When I found out that you not only loved the 1985 film but also the series of books that the film is based on, your intentions felt incredibly pure to me. It really resonated with you.

I was 14 years old when that movie came out. I saw it with my best friend in the movie theater. We both thought it was the funniest thing we’d ever seen. Then I was incredibly, pleasantly surprised to find out that there was not only a book that the movie was based on but a whole series of books. Although I couldn’t afford to go out and buy all of those books, ‘cause I didn’t have much money, I certainly could go out and acquire them by less legal means… [laughs] So that’s what I chose to do! And I devoured them. I thought, “This is a really cool character, and a completely different iteration of the character in the books than what I had seen Chevy [Chase] do in the films.” I thought there was a lot of potential in perhaps adapting it in the future. Of course, I didn’t have grand plans at 14 to be an internationally famous actor that could get this made myself. But lo and behold, that ended up happening. I mean, certainly not by myself. It took a lot of amazing people and a lot of time to get this done. It was an exciting opportunity. I knew the potential was there. It’s a reimagining. It’s a reboot. It’s a reintroduction to this character to a generation, or two, for those who haven’t seen it in some time. So I was very, very pleased to be a part of it. I hope to get a chance to keep doing it, as long as there are more books to be adapted.

So it wasn’t about just replicating the original films to revive the character in so many ways. You really wanted to go back to the books you loved and adapt it in your own way.

Did you have to reacquaint yourself with Fletch at all? What do you pick back up again?

I certainly reread quite a few of the books. I wanted to understand what I really liked about the book version of this character. I was reminded that he’s actually kind of sophisticated. He’s comfortable in many rooms. He’s comfortable with a wide range of personalities. He’s fascinated by life. He’s very much an active participant. In the book Confess, Fletch, he’s sort of retired and living his best life in Europe. I thought, “Well, that’s a nice place to pick up our story, too.”

Where the films are concerned, this property has a bit of a checkered past. There have been numerous fits and starts for additional sequels and reboots. You broke the “curse” with this.

Well, we got it made! [laughs] That’s the exciting thing. Look—every movie is difficult to get made. It’s like conducting an orchestra on a ship at sea. It’s very challenging, especially during a pandemic, and no matter what’s going on. We operated under the rules that we had. We had to make it for a specific budget. We had only a certain amount of days. We had Covid protocols. We had all of these roadblocks that were certainly thrown our way. But we made a movie that’s very much in the style of what we wanted to make. Greg [Mottola] came onboard and really brought a level of artistry and sophistication to the filmmaking that I was very pleased to see on screen.

You previously worked with Greg on Keeping Up with the Joneses.

That’s why we approached him. I knew that Greg had the capacity to make a very good looking movie for a budget, and I knew that if he heard me out and listened to my pitch that he would be as excited as I was to get on board with the franchise. And I was right. He was excited to do that. He brought all of his commensurate, significant skills to the table.

You also brought your Mad Men co-star, John Slattery, on board. You once had this to say about collaborators to GQ: “Comedy comes from being in a relatively comfortable environment.” With both Greg and John, there must be an immediate shorthand now, right?

Yeah, there’s that. Kyle MacLachlan and Marcia Gay Harden had also worked with Greg before. There was a lot of comfortable energy on set. That just enables your receptors to be open to listening and participating in a very active way, and that’s when you get some of the best stuff.

How difficult was it to get the rights for Confess, Fletch from Gregory Mcdonald’s estate?

That’s a better question suited to Miramax. I’m not sure what the process was on that. But I do know that they had the rights already secured when they came to me with it.

I wonder if that might’ve proved more difficult had Gregory still been around because, to his credit, he was known to be very creatively involved with the past films, even vetting actors and whatnot. It seemed to be the case that he was very, very protective of his IP.

That’s entirely possible. Thankfully, we had the blessing of the estate and a lot of goodwill.

On the subject of IPs, Top Gun: Maverick climbed back up to the top of the box office again.

I think it’s one of the only movies to ever be number one on Memorial Day weekend and Labor Day weekend. I was obviously tremendously pleased to be asked to be a part of that film.

It’s got legs like ZZ Top could only dream of. [laughs]

Was there any way to know that it might amount to this level of success and acclaim?

I had seen a very early cut of it so I knew it was very good. But the pandemic was an outlier and a very strange occurrence for all of us. So nobody really knew how anything was going to perform coming out of that unique situation. I think the movie rightfully gets a lot of credit for bringing people back to the movie theaters. I think it was a very good reminder of what we like to see when we go. We go to share this communal experience in a darkened room and have this emotional ride. That movie is a particular kind of one, and I think Confess, Fletch is another kind of one—a very funny communal experience with a story well told.

This is entirely subjective, but it’s also a great reminder that sequels can best the original.

What did you make of Fletch Lives, the 1989 sequel to Fletch?

You know—it’s a tricky movie. Obviously, it doesn’t hold up as well as the original. There are some very problematic sequences in it. I think the critical masses have already spoken on that one, and that might have been why they didn’t ever make a third movie. But I’m glad that we got both of those kind of out of the way. They’re their own thing and we got the chance to really reboot this whole franchise in a very, very different direction from where they were starting to head down.

I don’t mean to romanticize this too much, but since you were such a fan of the source material, maybe there was an underlying desire to set things right with Confess, Fletch.

Well, I’m a big believer in putting your heart and soul into whatever you do. That’s the operating principal under which I choose the projects that I wanna work on. And Confess, Fletch was definitely one of those that I’ve thought very deeply about. I’ve had multiple conversations about this with various filmmakers, various actors, and various studio executives. I’m very, very pleased that people are getting a chance to see this because we’re tremendously proud of it.

You said earlier that you would like to continue adapting more books in the series. Is there a particular book or a story element you’d like to explore, or are we getting ahead ourselves?

I don’t wanna jinx it. But I’d like to make all the rest of these movies. I read all the books—I know they’re very compelling reads. They’re all very fun. They’re fun journeys and fun adventures, and I’d like to be at the center of that. I hope we get a chance to do some more. So fingers crossed.

Now I really wanna check out these books.

Please do! The estate of Gregory Mcdonald would be very thankful.

I have to ask: What’s happening with Alpha Gang right now? This ensemble looks insane.

Ughhh! [laughs] Boy, now you’re making me really wistful here. Gosh, I don’t know. That’s another movie that got hamstrung—no pun intended—by the pandemic. I was very much looking forward to making that film. I’m not sure what’s happening with it honestly. I wish I could tell you. I just know that I really, really love that script and I really, really loved meeting those guys [David and Nathan Zellner, directors]. I hope that one hasn’t disappeared into the ether just yet.