A Conversation with Song Kang-ho

The actor on South Korea’s cultural explosion, working with Hirozaku Kore-eda, and his own future directing prospects. 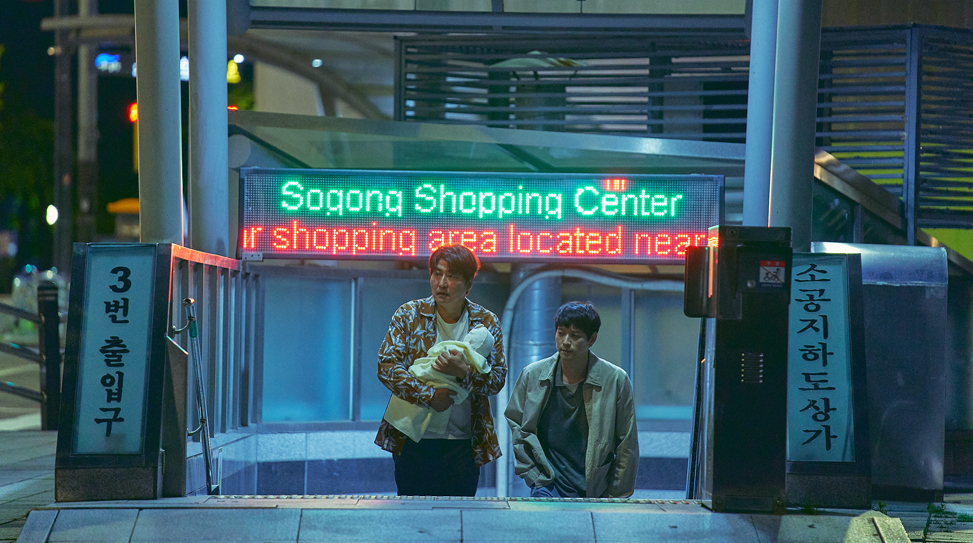 I’m grateful that Korean content has stirred the curiosity of a global audience.

Four years after winning the Palme d’Or for Shoplifters, Hirokazu Kore-eda returned to Cannes this year with Broker, his second feature made outside Japan after 2019’s France-set The Truth. Kore-eda has dedicated his entire career to one recurring preoccupation: The humane examination of makeshift, chosen families. With Broker, he continues that thematic exploration in South Korea.

Inspired by the baby box phenomenon—a hatch one might find at church, where mothers in crisis can safely and anonymously surrender their unwanted newborns—Broker tells the story of one such mother, So-young (Lee Ji-eun). Her son is swiftly intercepted by “brokers,” Sang-hyeon (Song Kang-ho) and Dong-soo (Gang Dong-won), who provide abandoned children to a network of wealthy, prospective parents. Their plan, of course, does not go according to plan: So-young has a change of heart and returns to reclaim her son. But then, upon learning just how much they expect to collect on her child, she joins their illegal operation. And so begins a roadtrip to find suitable parents—a roadtrip that will change all of their lives. Meanwhile, unbeknownst to the trio, two detectives (Bae Doona and Lee Joo-young) are hot on their tails for human trafficking.

Performances across the board are graced by brushstrokes that give equal attention to moments of sadness and unforced humor. Kore-eda has never been in a better company of actors, and at the center of all of this is Song—the patriarch of Bong Joon-ho’s Parasite, and South Korea’s unwavering national treasure—who picked up the coveted Best Actor trophy at this year’s Cannes.

[Editor’s Note: The following interview was conducted with the help of an interpreter.]

I’m sorry we’re not having this conversation in Korean. I’m a much better English speaker.

No, no. I’m sorry that I can’t speak English!

What has your experience been like with foreign press? Do things get lost in translation?

It can go a long way with first impressions, right? I heard that you first met director Kore-eda by chance in a hotel elevator in Busan in 2007. That was certainly a fruitful encounter.

Yeah, we met 15 years ago, and we’ve met multiple times over the years, whether it was me visiting Japan or director Kore-eda visiting Korea. And as much as I had seen his body of work, he had also seen every film that I’ve been in so we had sort of figured each other out that way. I felt like I knew him before meeting him. I really admire a lot of the work he has done in his career. He has a lot of fans in Korea.

Did director Kore-eda ever tell you what his favorite movie of yours is?

Yeah, director Kore-eda said his favorite film of mine has been Secret Sunshine. He also believes that’s the best acting he’s seen from me. He has told me this multiple times.

I understand that he wrote Broker with you in mind. Were you aware he was doing that?

Yeah, I knew that he was writing the script with me in mind at the time, and I had a lot of curiosity about it. I got the offer six years ago. I was very excited to get the offer for this film.

I spoke to director Kore-eda when The Truth was coming out in America and he was already interested in working outside Japan again. You’ve on the other hand gone on the record before to say that you’re not so keen on working overseas. Do you still feel that way today?

Even more so than foreign projects, I’m not getting any offers in Korea, so that’s kind of the biggest homework for me. [laughs] All jokes aside, I do want to focus on projects in Korea. I don’t necessarily feel pressed to do projects overseas. But of course, if it’s a good connection and a good opportunity, I’m open to doing it.

Director Kore-eda said something interesting to me about language barriers: Even if you speak the same language, you can still have trouble communicating, and connection can be made in other ways. How did you overcome the language barrier, to know and trust?

Of course. Well, the difference between Korean and Japanese cultures is not the same as East versus West. I think the two countries share a lot of similarities, like when it comes to sentiment. I don’t think there was all that much that felt unfamiliar necessarily because there is a body of work that each of us have produced. I actually think there was a lot of camaraderie. I didn’t particularly have a lot of fear going into the project.

He is known to film and edit scenes on the same day, and also rewrite before the next day’s scenes. I wonder if he continued to do that on Broker, and if you enjoyed that process.

At first, I didn’t know that he has this type of shooting style. I thought we’d be working off a relatively precise script. And like you said, there was a lot that changed during the shoot. The shooting schedule would change. Of course, I was a bit startled by this at first. But I think there is a very specific momentum and excitement to that process. I really grew to enjoy it. So I didn’t find it particularly difficult or challenging.

You’ve been at the forefront of Korean cinema for a long while now, and you’ve become a global star in that time as well. You’ve experienced the growth of Korean cinema on the world stage firsthand. If we were to use markers, so much has happened even between The Host in 2006 and Parasite in 2020. Maybe you think about this from time to time: Why is Korean content so resonant on a global scale, and what makes it so explosive?

I’m grateful that Korean content has stirred the curiosity of a global audience. I do think it’s in part the result of 20, 30 years of the efforts of Korean artists and the work they’ve been doing. I’ve been thinking about this question quite a lot recently actually. Another part of it is that, I think the interest that we’re garnering is sort of fundamental to the dynamism that Korean society possesses right now. I also feel that the Korean audience has very high expectations and interests in our own content. I think that’s part of the reason why so much creative work has been coming out of Korea: To meet the expectations of even just the Korean audience.

One of my favorite movie endings—not just Korean but of all time—is from Memories of Murder. When they finally caught the serial killer the film was based on in 2019, I wondered if that might’ve given you the closure, the resolution, your character never received.

Yes, of course. It was surprising news. When he was captured—for director Bong [Joon-ho], for me, and for everyone that worked on the film—we had very complex emotions. We were of course very happy the criminal was caught and there was justice, but at the same time, a lot of pain from that time in Korean history resurfaced. So I would say that my feelings were very complicated.

You work with some of the best auteurs. Does that rub off on you, to maybe one day direct?

I think a person should do what suits their abilities, and I already find acting so difficult. I don’t know if directing is in my wheelhouse. I’m very satisfied with the life-long homework of acting.

You’re in a league of your own, truly.

Thank you. Thank you so much.