The actor on assuming leadership roles on set, Star Trek, and charting a character that’s on the psychopath spectrum. 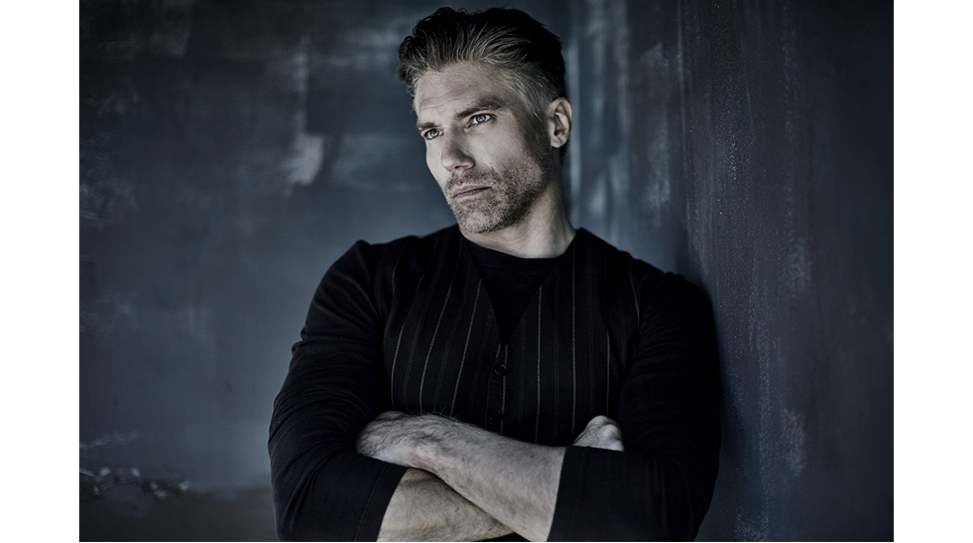 We talk about craft a lot because we are constantly trying to put a finger on something that is so movable and fleeting.

Trekkies everywhere were no doubt thrilled over the announcement that Anson Mount, who made a huge splash as Captain Christopher Pike in season two of Star Trek: Discovery, will headline his own spin-off series set on the USS Enterprise with Star Trek: Strange New Worlds, which is currently in its third month of production at Paramount+ and scheduled to launch in 2022. In the meantime, the actor is heading to the big screen in an entirely different kind of role and universe.

In Nick Stagliano’s noir thriller The Virtuoso, Mount is the titular professional assassin who, owing some sort of non-monetary debt, accepts a new assignment from his enigmatic bossman, the Mentor (Anthony Hopkins)—a unique story hallmark, no one in the movie is called by name. But unlike the previous “jobs,” this particular assignment offers our protagonist precious little information, other than a cryptic two-word code and intel that his mark will be at a diner in a sleepy country town at a specified hour on a designated date. When he rolls into town, the Virtuoso must identify his target from several possible suspects, including the Deputy (David Morse), the Loner (Eddie Marsan) and the Waitress (Abbie Cornish), all threatening to derail this operation.

As for the actor’s more intimate engagements, he continues to host his podcast, The Well, with Branan Edgens—a series of curated conversations with inspiring artists, thinkers, and innovators.

Anthem reached out to Mount this week to discuss his enterprise, that enterprise, and The Virtuoso.

Lionsgate will release The Virtuoso in select theaters and everywhere you rent movies on April 30, and on Blu-ray and DVD on May 4.

Hi, Anson. It’s great to connect with you again.

You as well. How’s it going?

I was actually listening to your podcast. It’s great. Maybe there’s meaningful overlap in what we do because, essentially, we’re sharing stuff that might be interesting to other people.

Oh cool. Well, thank you for saying that.

Did you recently move up to Canada?

No, not permanently. My wife is Canadian, but—thank god—she moved for me. [laughs] We did move out of New York City, but we moved to rural Connecticut a couple years ago. We’re just in Ontario while we’re shooting [Star Trek: Strange New Worlds].

Congrats on that show. That’s a big gig. It’s crazy that we haven’t talked since Cook County.

Yet another lovable character. [laughs]

With Cook County, you had mentioned to me how you like to have a voice in the editing room—not to lord over that process obviously, but to have more of a say in how your performance is put together. Is that hard to come by? Did you do that on The Virtuoso?

Well, it was a bit of a different process because Nick [Stagliano] is not a freshman filmmaker. Nick knew very, very precisely what he wanted so he didn’t feel like he needed somebody to look over his shoulder, and I didn’t feel the need to demand that. I guess I saw it in stages and gave him my thoughts, many of which he took. We had to rerecord the voice-over several times because things change from edit to edit. That was a good way of working on it together because the story is so dependent upon the voice-over weaving you through that very tangled path. It was a really great way of continuing to write this thing that had already been shot.

The voice-over narration gives the film its own unique identity. It feels like you’re thrown into a novel at times. We don’t get that much access into a character’s interior normally. It reminded me of Memento a little bit. What was the actual recording process like for you?

The first time I did it was literally on the floor of my hotel room in Pennsylvania. [laughs] It was while we were still shooting and just to have a rough track for editing purposes. Then came time to lay down a real track and there were some story changes so Nick asked me for a tonal change. I had adopted this very steely tone throughout the entire voice-over and he wanted me to soften the edge on that, particularly later on in the film. That was one of the biggest changes. I think there were a couple more tweaks after that, but then we were done.

There’s an on-set interview floating around online where you talk about this role, in the thick of it. You knew immediately what you wanted to do with this role and you said that’s rare.

Usually when you read a script, the exterior spine of the story—the physical story out in the real world—is very clear. But it’s not always clear what the interior spine of the protagonist’s story is: their emotional journey. With this one, it was as clear as a bell the first time I read it. It was about this guy who believes he’s on the psychopathic spectrum, who starts to develop a conscience. He doesn’t know what it is and he’s trying to figure it out. I’d never seen that before. I’d never seen a coming-of-age story like this. Particularly, you don’t see a lot of coming-of-age stories for people who are in their middle ages. And I’d never seen one told from the point of view of somebody who is or maybe thinks that they’re psychopathic. It was just such an interesting take on it that I knew immediately I wanted to do it.

You also described him as somebody who’s still very much a child internally. He’s stunted in his own way until he starts breaking the rules, or developing a conscience as you were saying. The idea of redemption for a psychopath is of course interesting on its face as well.

That’s why it was so important for us to establish that this guy lives in solitude and has no human connections. That is not natural, you know? We are by design social animals. It’s why people go crazy when you put them into solitary confinement. You literally lose a sense of yourself in the absence of other people. So that was a very important character point—not just for location or a sensibility to mise-en-scène. That was very important for us.

In the movie, a virtuoso is defined as: “one who leaves no trace behind” and “an expert to timing and precision.” I wonder if that very idea of a virtuoso was interesting to you from maybe an actor’s standpoint. Was there overlap on that front in how you related to him?

Yes. Not too many people outside of the arts think about what they do in terms of the craft, and particularly not outside of something that’s as ephemeral as acting. We talk about craft a lot because we are constantly trying to put a finger on something that is so movable and fleeting. Because we are talking about human interaction, which can’t be charted in any physical form and you’re also working with yourself as your instrument. I was particularly keen on establishing his sense of craft, and actually, Nick and I worked together on tweaking the voice-over a little bit. I didn’t want it to be so on the nose. I almost wanted it to feel like he’s reading from his “rule book.”

You have a curiosity about things that stretches beyond the field you’re most known for and your podcast is just one proof of this. Many years ago when we talked, you were interested in exploring Pentecostal Appalachian preachers, for instance, which is so, so specific.

I haven’t thought about that in awhile. [laughs] My mind has been so focused on this and Star Trek recently. I always had these dream roles in the theatre, many of which I’m too old for now. But these days, I don’t know… I know it when I see it. I do kind of fancy the idea of doing something in the world of politics. We recently sold something to a network. Sadly, I can’t talk about the subject matter, but it’s in the world of politics and we’re working on that as a producer.

I need to go back and watch the short film [Last Time We Checked] you directed. That story appeared political or political-adjacent. Back then, you made it very clear to me that you were disinterested in the idea of directing a feature-length. Do you still feel that same way?

Yes. I look at directors and how they are looking at a scene and how they’re handling productions and how they know intrinsically or on a gut level where they want the camera—and I just don’t have that. [laughs] I just don’t think that’s where my strengths lie. I don’t feel the need to go in that direction simply because everybody’s telling me that I should, particularly in television. I feel like we’ve gotten into the habit where, when a show’s a hit, sometimes the people in the cast will negotiate to direct an episode. I’m not a fan of that. I feel like that pulls everybody else onto a tightrope walk with you. So no, I think I’m much more inclined to produce and work with directors who are better than I would be. I want to focus on my work as an actor and as a producer.

Your seat on the USS Enterprise is iconic. Do you feel at home in that position on Star Trek?

You mean in terms of the character being a leader?

Yeah, but also, the lead actors literally lead sets and cement the tone of productions.

Right, right. Well, in terms of that, I was fortunate enough to have had the experience on Hell on Wheels where I feel like I had the opportunity to make all my own mistakes. [laughs] Also, I learned how I work best, how my group functions best, and how my cast functions best. I’ve managed to bring that with me. But shooting in the time of COVID is so different. We’re only able to really interact when we’re at work so that’s a horse of a different breed. We’re getting to know each other more slowly. I do think about what you’re asking. You learn things along the way. You try to say “good morning” to everybody because you see the difference that makes. You say “have a good weekend” because you see the difference that makes. You thank people as much as possible. And in terms of the leadership qualities of the character, he was Gene Roddenberry’s original idea for what a Starfleet captain should be so, in a way, you kind of have to reflect the Starfleet code. I don’t think I would ever have been able to play this role had I not forced myself to start teaching several years ago [at Columbia University], force myself into a position where I had to stand up in front of people and tell them exactly what I knew or didn’t know, and think more about their process than mine. I could never have done this role without that.