The visionary on exploring the intersection between science and spirituality, building utopias, and the spectacle in his filmmaking. 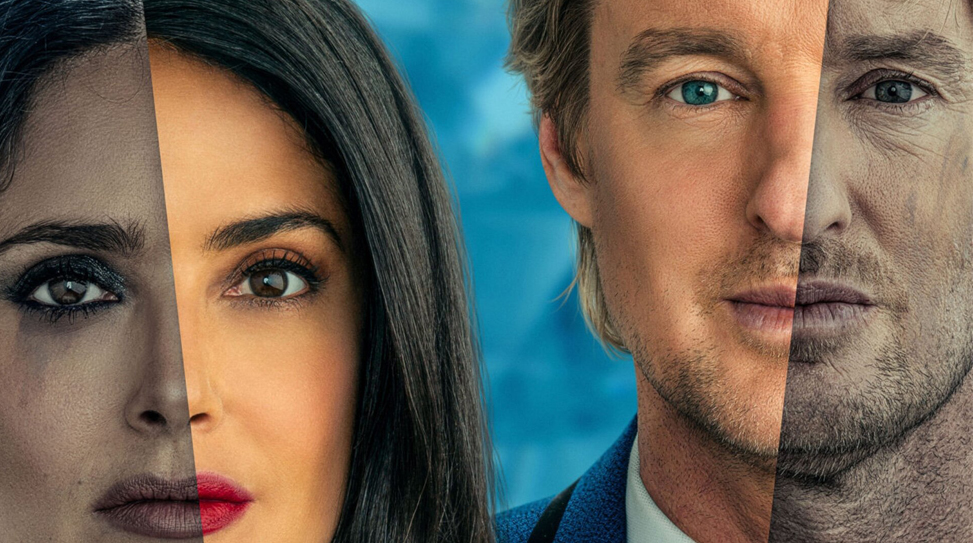 Bliss takes emotional ideas and turn them into cinematic objects that you can perceive. The feeling of bliss looks like Bliss.

To say that Mike Cahill’s Another Earth stole the show at the 2011 Sundance Film Festival would be a gross understatement. The high concept sci-fi drama signaled the arrival a new visionary. Several years later, his sophomore effort, I Origins, would hurl audiences into a similarly romantic, biological, and metaphysical dimension—his signature—that proved just as distinctive as his first.

Now a decade in, the writer/director returns with Bliss. In it, Owen Wilson portrays Greg, an office drone who one day chances on Salma Hayek’s enigmatic, homeless Isabel, who not only informs him that they are soulmates, but also that the polluted, broken, and colorless world in which they find themselves is a computer simulation. Doubtful at first, Greg slowly comes around to believing that there might be some truth to Isabel’s conspiracy. Together, they journey into a utopian reality.

Anthem caught up with Cahill this week via Zoom to discuss the past, present, and future.

It’s the ten-year anniversary of Another Earth premiering at Sundance. That’s actually one of the few movie stubs I’ve singled out and saved in my memory box over the years.

I can’t believe that. I didn’t know it was ten years until you said that, my god. Time flies, dude. It goes by so quickly. That was a very, very special moment. I remember that was the first time something I ever made met an audience where you’re like “woahhh, this is crazyyy.” You make something that you like and when you meet other people who can appreciate it, you feel like you have a secret language or something. We’re doing this stuff that doesn’t have words. We’re trying to communicate some part of humans: “You see that? The same thing that I’m seeing?”

I can distinctly remember Brit [Marling] telling me about this one producer who had come up to her after that screening, sobbing and so moved by the experience. With I Origins and now Bliss, the intersection between science and spirituality remains a huge touchstone in your emotive filmmaking. Do you see a natural progression in the arc of your storytelling?

Definitely! And thank you for pointing that out. It means so much that you’ve seen those movies and you appreciated them. It feels like we know each other in that sense, and that’s very comforting. It is certainly something I’m interested in and continue to be interested in: the intersection of science and spirituality. I feel like those are very obviously fields that you think of as being very different from one another, but in the vector of where they’re both headed—if that makes any sense—there is an overlap. There’s certainly the questioning of existence and meaning and purpose. The idea of Bliss feels like a logical extension of Another Earth and I Origins. They are minimally science fiction, where one thing changed about reality is a way to zoom in on some part about this human spirit and soul, where you can strip away the science fiction conceit and still tell the same movie. It would just look a little different, but you could still tell the same story about a man being caught between two different worlds. Perhaps it would be a bit of a dark film or be a little bit more heavy, but you can use science fiction to look at these ideas like mental health or addiction or homelessness or the fringe of society or falling off the main path of society. You can use simulation theory, the idea of another world, to bring that idea to life in a way where we don’t judge it. We look at it and we say “I want to stay in the Bliss World, too. I want to walk around that boardwalk. I want to be on that boat. Wow, and you’re telling me none of this is real?” and generate that emotion. I feel like science fiction allows it. I don’t think it could be done otherwise actually—I’m going back on myself. I almost feel like to do the purist, most empathetic version of this story, the science fiction is required.

I wonder if all that we’ve seen and lived through in the past year adds a potency to Bliss.

Yes, certainly. There’s a relevance. In many ways, there’s a story in there about someone trying to generate appreciation. Their relationship is falling apart and she creates this elaborate simulated world to basically have her husband stop complaining. [laughs] There’s this sense of gratitude or our sense of appreciation for the status quo. I mean, if you’re eating food, have a roof over your head, and not sick right now? You’re actually better off than millions and millions and millions of people. Hold that sacred. That relevance is there. But that’s part of human nature. I feel like also that when the pandemic is done, people are gonna forget about it in like three months. Our brains will just reset—ground zero. Our emotional center shifts given the situation. What do you think?

It’s awful to think this way, but I would say most definitely. I do think we will largely move on and pretty quickly turn our attention to something else. I often find myself mesmerized by the emotional rewards in your films. You once told me you aim to give people an emotion to have and to experience that is hard to articulate. About I Origins, you said “I want you to have a diminished fear of death.” What are the emotional epicenters of Bliss to you?

It comes in the line “You’re not late. You’re here.” It gives me the chills to think of this idea. The other thing is when Greg holds up the picture of his daughter and he says “This woman says she’s my daughter and I believe her.” To me, that reveals how we do have a choice in what world we’re in. It’s maybe hard, but we do have a choice in where we show up, who we’re present with, and how we let a person know that they’re important in our lives—that they’re not half-invisible, not a hologram. It’s hard to put into words. We don’t have a lot of choices in our lives. I mean, there are certain things that we can choose. One of the things that we definitely can choose is what we believe in, what we focus our love and attention on, and what we invest in. We call it ideology. We call it point of view. We call it value system. You get to choose your value system. When you do that, there are certain benchmarks and things that denote success and other things that are failures based on what value system you choose. That is one of our superpowers.

How far do you think we are from actually being able to live inside simulated worlds, where the Thought Visualizer, a futuristic hardware you envisioned, could also conceivably exist?

Not far! I wanted to create a plausibility in the Bliss World, and especially this computer that’s made of brains. During the Thought Visualizer scene, Isabel paints a sort of broad stroke picture of how the world has eradicated a lot of things like poverty and inequality and all these other things, and created a world where people are scientists and artists pursuing the “wonder fields.” The three contributing factors that she highlights are automation, synthetic biology, and asteroid-mining. Although it’s peripheral to anything emotional, what’s fun about that idea is, with synthetic biology, imagine we’re creating computers with neurons in the near future. With CRISPR, perhaps we can grow brains in a Petri dish. It’s all science fiction of course, but if you read Nick Bostrom’s  2003 Are You Living In a Computer Simulation? paper that’s all over the internet, it paints a very tight argument that chances are we don’t have to wait—we’re in a simulation right now.

I’d venture to guess that a lot of the ideas you play around with are already incredibly interesting to you and you have at least a working knowledge on these subjects from the start. On I Origins, I remember you had a great resource in your two older brothers who both happen to be molecular biologists. What more research did Bliss require?

The idea of building utopias in cinema is always a challenge, and I looked at all the different film versions of utopias. It’s hard. Usually, the story of a utopia in cinema always ends badly. But the idea behind automation means there is no exploitation of labor, right? And asteroid-mining means victimless, limitless resources. An asteroid holds 17 trillion dollars worth of precious metals and everything. So the idea is, if there was a way where life wasn’t about the grind and life was about passion, what could you justify it with? Well, there would have to be victimless resources, and floating around the earth are plenty of asteroids. This is a fascination of mine. And automation is real. It’s been around forever and it’s not going away obviously. And then synthetic biology is CRISPR, which has been around for eight or however many years. It’s one of the world’s greatest discoveries—it’s bigger than the Internet. It’s going to get even bigger. It’s our ability to shape biology. I thought it would be kind of cool to portray a utopia where these things are not used to create monsters or scary robots destroying the world, but are actually utilized ethically, thoughtfully to create a world where people could pursue the “wonder fields” of art and science. So it’s part of my common day-to-day. This is what I’m interested in so the research is just fun.

You’re never short on spectacle either. Spectacle, which is more commonly associated in film as some kind of visual explosion, actually feels more intimate like poetry in what you do: the Russian cosmonaut monologue in Another Earth or looking into the human iris in I Origins or the twirl of Isabel’s hand when she’s manipulating the world around her in Bliss. I wonder what you consider spectacular in the context of your own work.

That’s a really beautiful question. I mean, spectacle is the thing that makes us pull in a gasp of air. It’s the thing that we feel when we’re witnessing the sublime, right? It’s when we feel like there’s something daunting? The reason why we understood spectacle as a visual effects component for so many years is because visual effects throughout history kept pushing the envelope. They’re always showing you something where we’re like “woahhh!” if it really works. But for me, I feel like there are components of the human heart that give me that same gasp, and particularly the idea of a human bestowing a second chance on another human authentically. There’s nothing in the world that makes me gasp more than the spectacle of the human condition: the potential and the beauty that lives in us. That’s spectacular. We use visual effects in Bliss, but there’s an emotionality to the ideas. There are holograms walking around, but the holograms are meant to be things that you’re half-seeing. Bliss takes emotional ideas and turn them into cinematic objects that you can perceive. The feeling of bliss looks like Bliss.