The non-binary actor on committing to the unknown, the next hill to climb in storytelling, and the thing they’re most afraid of. 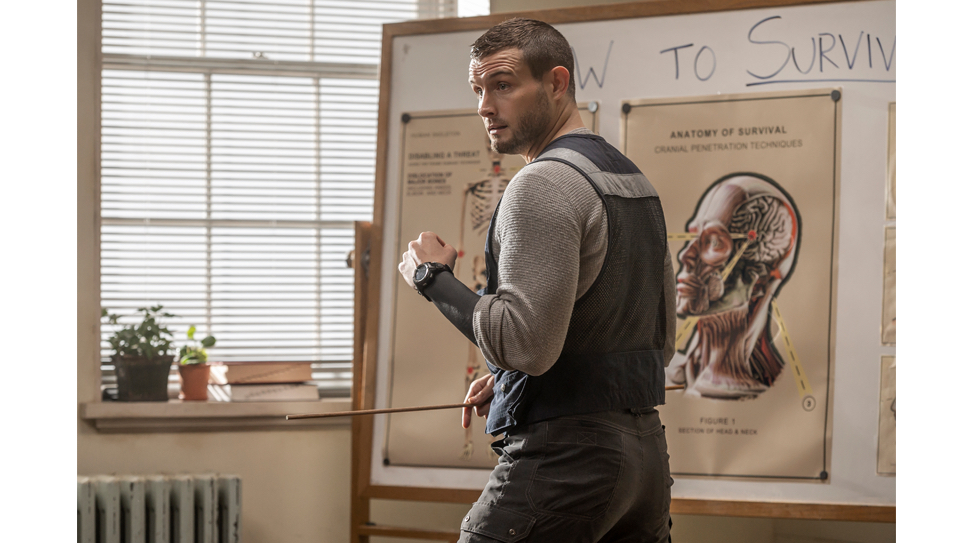 These last two years have proven I don’t know shit, and I’m committing to the unknown.

Nico Tortorella—the non-binary actor, author, activist, and all-around predominant voice in the fight for visibility, representation, and education across and beyond the LGBTQIA+ community—recalls watching The Walking Dead religiously and even having auditioned for the flagship show’s first spin-off Fear the Walking Dead. It’s when they failed to land a role on the latter show that they stopped watching—a decision that isn’t at all difficult to understand. Things, however, took an upturn when they booked the second limb of the franchise—The Walking Dead: World Beyond.

Turns out, it was fortuitous. Set years after the onset of the zombie apocalypse, which the flagship series laid the groundwork for, World Beyond concerns a sheltered community in Nebraska where civilization has been largely rebuilt. The story centers on a group of young people who’ve never before faced the true dangers of a zombie-infested world when they cross the threshold of their relative paradise. The 32-year-old actor plays Felix, one of the older generation members tasked with guiding and protecting the teenagers at the core of this narrative. And fortuitous because Felix is a queer character, and it was pitched to them as such by Scott Gimple, one of the show’s creators, adding, “The only binary that exists in our universe is dead or alive.” Tortorella was sold.

Anthem spoke to Tortorella about their evolution in our changing landscape and entertainment.

The Walking Dead: World Beyond Season 1 arrives on DVD and Blu-ray on June 15.

Aw, I appreciate that. Thank you so much. I see you, too.

I checked out your essay for The Gay Times. In it, you refer to our pre-pandemic world as “the pre-apocalypse.” I got to thinking about this idea of the before and after. How it relates to our COVID reality, The Walking Dead, and also to just overcoming adversity—passing that point of no return. Having no normal to go back to, you called that “fucking freedom.”

Yeah! This show came to the table—maybe it was the end of 2018 when I started having conversations about the show—in the middle of the Trump era when the social and political landscapes were tumultuous. My initial reaction was, “Why do we need this show, another version of this show, ten years later? How differently are we going to tell this story in relation to the world around us? Literally, in a world beyond?” Scott [Gimple], Matt [Negrete, co-creator], and I had really incredible conversations about where the show was going to go, the stories they wanted to tell, and who Felix was. It was this opportunity for me—not post-Younger, but coming off of playing Josh on a half-hour romcom—to put in a little more effort, so to speak, and exist in a much larger universe portraying this cool superhero of sorts. I like to flip stereotypes on their heads, pick them apart, and reimagine anything to what we think it’s supposed to be. I had that opportunity with Felix and I will forever be grateful that I had Felix over these past couple years.

What are your thoughts on the speed at which things are improving in the entertainment industry for visibility and representation? Because when you’re waiting for the world to catch up, it never feels fast enough, even though we’re at a much better place than before.

Yes. Look—we’re definitely in a better place than we’ve ever been, right? I think these last two years have affected everything. Obviously, on the surface level, but I think underneath all of that, too, there are some real traumas to unpack. We’re going to see them unfold in the stories that are gonna get told on television in the coming years. Just consider everything that must’ve been written in the last two years and how art has been affected by the world around us. Now those shows and those films are gonna get made. I think priorities are gonna shift a little bit—at least they have in my own world. I’m in this hibernation period, so to speak, of what the next hill to climb is going to be. Obviously, so many stories need to be told—we’ve only really just begun—but it’s also the types of stories that need to be told. It’s not just about the people telling them.

Felix might be a superhero, but not in a full-fledged sense that would require a cape or whatnot. You told Entertainment Weekly that you would like to play a real superhero at some point. I wonder what that looks like in your head and what that would mean to you.

Well, I can tell you that it’s gonna look like me. [laughs] Because that’s the only way I can go about it, unless you’re talking about a full green screen situation. You know, I don’t really know what that person is and I think that’s the magic of this industry. I was just talking about this yesterday with some of the actors on this show. At any given moment, you get sent an email that has character descriptions, a project description, and names of all the people attached to it. My initial reaction once I see that email is to paint the entire picture of the experience through the lens of my own world immediately. An entire universe will open up as a possibility that didn’t exist before. If I was already open to ideas two years ago before this mess of a situation we’ve all lived through, I would say that I’m exponentially more open to options now. If I thought I knew the world around me then? These last two years have proven I don’t know shit, and I’m committing to the unknown.

When you first started out, did you have any way of prophesying how you would be able to navigate the business in the way you are currently—the way you wanted to and needed to?

For sure. Even at such a young age, I had a plan of working in this industry in order to infiltrate larger ideas. I have a vision board from when I was like ten years old, my purpose all mapped out and how I was going to have a voice. The message has changed some because I don’t think I realized exactly what I was going to be speaking to at that age, but this has been fully planned.

Does playing queer characters take precedence over everything else or is that too generalizing? How much does your advocacy work inform your decision-making when it comes to roles? I wonder if these are inseparable.

That’s a great question. I think it’s constantly changing. Like I said, I’m in this hibernation period. I think if you asked me that a year and a half/two years ago, I would’ve said, “I’m only interested in playing queer roles right now.” I think that has changed. Now I’m committed to the unknown and more attached to the story that’s being told—not necessarily the character I’m portraying in that story. It’s about the bigger picture. These last couple years have made me look much more intensely at the bigger picture than my own personal story.

With your role in Scream 4, for instance, I wonder how that role would square with you had it come at this moment. Because, conceivably, even then, it’s not so black and white. I would think any actor would want to take part in that franchise and work with Wes Craven.

Totally. A hundred percent. It’s not a binary decision, right? It’s not only one thing or the other. You have to take everything into consideration when considering any move in your life, whether it’s an acting project or where you’re going to dinner for the evening. It’s like, what type of food are you actually interested in eating? Who’s going with you? Are there any dietary restrictions? What time does the restaurant close? It’s everything. There is a layer of things to consider and moving forward, I’m way more interested in the bigger picture. I just want to work with cool people and make cool art. That’s what it really comes down to.

How much of your arc did you know walking into World Beyond, past Felix’s core ethos?

None. None at all. I think that’s the nature of television just in general. Decisions are being made in real-time and that time can be very, very mercurial, especially when you take into consideration everything that’s happened in the last couple of years. Just think about how production has been hit. I don’t really know what I’m shooting in terms of my character or where the arc is going sometimes until I get a script. For this block, for example, we didn’t get scripts until the day before we started shooting. So it really just leads into the idea of committing to the unknown. You gotta roll with the punches. If that’s not an analogy for life, I don’t know what is.

You’re fearless and I don’t think that’s really up for debate. So let me throw this question back at you from your essay: What are you most afraid of? What are you afraid of the most?

[laughs] To be honest with you, this is gonna sound fucked up. Okay, not fucked up, but it’s just strange and maybe not how you thought I would answer the question. The one thing I’m most afraid of is mold. I have this fucking terrifying fear of peeling back paint in my basement and seeing black mold. That is what I’m actually most afraid of.

You’re right. I wasn’t expecting you to say that.

Which obviously speaks to something much larger: the unknown and the darkness that you keep secret. But, yes, mold. Mold and water damage is a real fear of mine.

I love how specific that is. I actually moved this year and in the old apartment we found mold in the storage closet that was kept closed for two years. It was all over the walls. It was shocking. It’s shocking that we unknowingly lived with it in our space the entire time.

Yes. I’ve seen firsthand the damage it can do to your health long-term. I remember some friends who had forever mold damage. It’s kind of like Lyme disease where it’s not really treatable. It’s this silent, deadly fucking threat that exists. And it can be in your walls. Oof! It just gets me.

It is a silent killer.

With that said, there is really good mold—healthy fungus. So this isn’t black and white, either.

I appreciate the positive spin on this.

Totally! I love a good mushroom, don’t get me wrong.