The Englishman on his recent spate of villainous roles, his enduring love of rom-coms, and the surprising reason he got into acting. 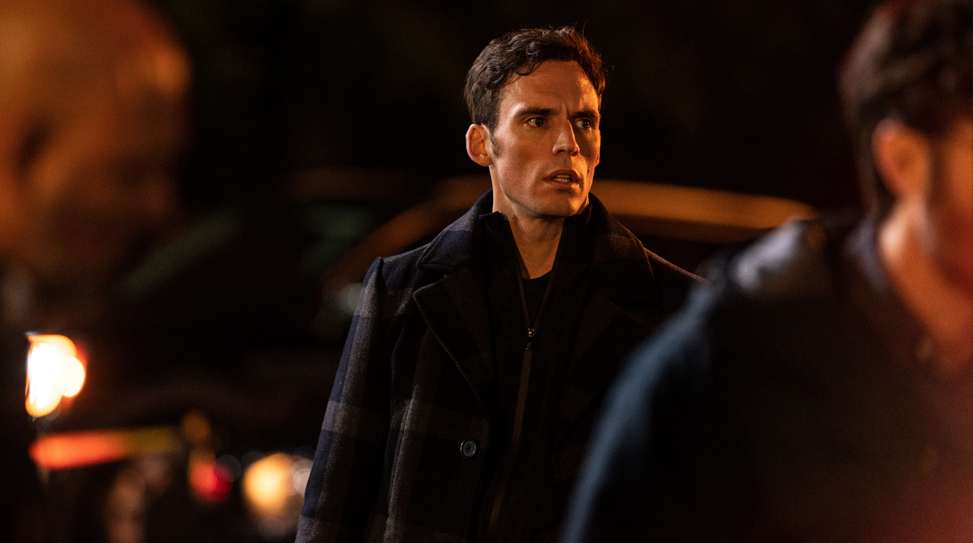 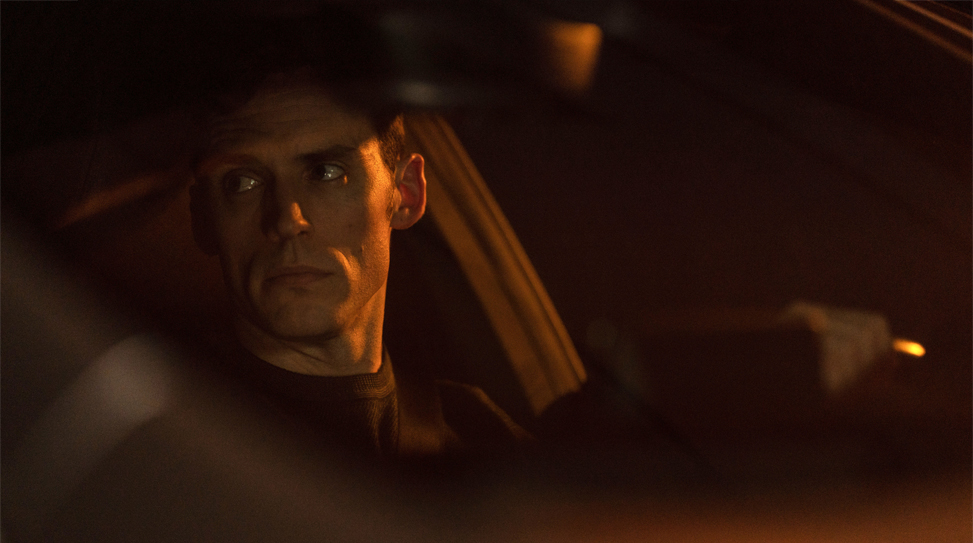 I got into this profession because I wasn’t a big fan of myself. I want to continue to push those boundaries and make departures from who I am as a person.

ADRIFT, BOOK OF LOVE, EVERY BREATH YOU TAKE, LOVE ROSIE, ME BEFORE YOU, SAM CLAFLIN, THE HUNGER GAMES

Vaughn Stein’s Every Breath You Take is unmistakably a throwback to a bygone subgenre: the ’90s stalker-invasion thrillers wherein the suspense hinges on fear that’s uprooted by an outside force so menacing that it can unravel the most ironclad of familial units. Robert De Niro in Cape Fear. Mark Wahlberg in Fear. With cunning, psychopaths will slide into heroes’ homes on waves of discord. Now we have Sam Claflin to fear in his latest villainous turn—and the film’s best in show.

The movie’s prologue sets the tone: Grace (Michelle Monaghan) is driving through a rainstorm with her teenage son when they’re involved in a fatal t-bone collision. An unspecified period of time later, the surviving family—including patriarch Phillip (Casey Affleck) and elder daughter Lucy (India Eisley)—has retreated into themselves, unable to overcome this great tragedy. Grace is now a shadow of her former doting mother self, obsessively swimming laps in her well-appointed home. Meanwhile, Lucy is kicked out of boarding school for her drug use. As for Phillip, he has thrown himself headlong into his vaunted psychiatric work, treating Daphne (Emily Alyn Lind), a fragile case of a disturbed young woman with a litany of problems of her own. It’s when this patient dies by suicide that we’re introduced to her grieving brother James (Claflin), who turns up at Phillip’s home to return a book that his sister had seemingly borrowed. Before you know it, Grace has invited the charismatic stranger over for dinner. As James slowly infiltrates the clan’s lives, making a play for both Grace and Lucy, he grows increasingly shifty, haywire and unhinged, subverting the family’s sense of security and eventually turning them all against each other.

Anthem reached out to Claflin to discuss his diverse roles and portrayals—past, present, and future.

Every Breath You Take hits select theaters and premium VOD on April 2.

Hi, Sam. How are you doing?

I understand you’re filming right now. Is this for Book of Love?

That’s right, yeah. I’m out in Mexico at the moment. I can’t complain. There’s sunshine.

And if I have the timeline correct, you wrapped production on Every Breath You Take right before the pandemic hit in early 2020.

Yeah, about a month before.

You snuck right in there.

It was the last thing I had done, and it was a whole year before I worked again. It’s been nice to get back to it. It’s one of those hard pills to swallow: not knowing what was about to happen, it’s that thing where you wish you’d savored it in that particular moment a bit more, in a different way. But I’m grateful nevertheless.

I do wonder about that because everyone is having to adjust to these new protocols and mandates on set. Does anything feel particularly different to you being back? Has anything tampered with your creative process or how you normally liked to work pre-COVID?

With the creative process, not at all. Actually, the act of filming itself I feel is very similar. If anything, I think people are probably more focused in a way. Everyone is very efficient and very on top of their jobs. In all honesty, I’d say the biggest difference is that social aspect of filming. As a company, as a team of people, the socializing with the crew and the jokes and sitting together at lunch time—it’s those aspects I think that’s really sorely missed, for me anyway. And with that, because there isn’t as much socializing, there’s less time-wasting. There’s less chat and there’s less conversation. There are natural kind of things that are slowing the process down because there are the safety precautions and everything is as clean as it can be, and with that, the time-wasting is gone. So it sort of swings and roundabouts as they say.

I have no idea who first said this or where it originated from, but there is a saying that a story is only as good as its villain. You make a really great one.

Thank you! In real life as well. [laughs] It’s strange because at the beginning of my career, I played anything but a villain. It’s been the last few years—in fact, since I became a dad—that I’ve mostly played only villains. It’s been quite an experience. I’ve quite relished in it, I suppose, portraying a darker side to myself. I think everyone’s got that dark side in them. I think having that outlet in film is quite useful.

In keeping with what you’ve said in the past, you do have the desire to push outside your comfort zone and James seems like the perfect opportunity in which to do that.

That to me was always the thing that fascinated me most about this profession. I think having the opportunity to portray things and learn about people or cultures that I’m not that familiar with, I’m growing. I feel like with every character that I’m playing, I’m learning and evolving in some way. It teaches me something about how to deal with certain problems. I think the challenge of making someone that I wouldn’t normally like likable is something that I relish. I’m very grateful for the opportunity to play people that are so distant from myself.

I hope he’s very distant from you.

It doesn’t get much distant than a psychopathic killer. [laughs] It’s quite enjoyable.

Where do you throw the anchor with someone like James? Do you perhaps make that connection from a place of understanding what personal loss feels like?

It’s really difficult to know. With a lot of villains and a lot of the people who I don’t necessarily understand mentally, what’s been sort of enjoyable is exploring and learning and reading a lot about the psyche and why people make certain decisions in their lives. It usually stems from a moment in their past or an experience that’s driven them to such an extent, and that’s the enjoyment. Researching and coming up with someone’s backstory—even if it’s not written in the script—as to why they are acting the way they are acting is part of the enjoyment for me. It’s hard to know exactly where you draw the line: where does Sam end and where does this character start? I just try to leave myself out of the equation. I try to just jump into the shoes of someone who is, you know, very angry and obsessive and determined. Driven. Resilient. There are so many characteristics of his personality I can relate to, but equally, there are so many things I just can’t understand fully without having experienced exactly what that man has experienced. There’s no way I’ll ever know so you just use your imagination to try and dot the i’s and cross the t’s.

There is emotional logic to his unraveling as well. To see—even in his most unhinged moments—tears running down his face, he leaves the realm of caricature. In all that madness, you also take him to the grief-stricken and vulnerable places so capably.

I appreciate that. I think that’s the challenge of making someone believable. Those stories are something that, again, I can’t relate to personally. I don’t know anyone like that and I’ve not spoken to anyone like that to know exactly what they would be going through in this particular moment. So as I say, you just have to sort of piece things together yourself and use your imagination. That’s the challenge and that’s what’s exciting to me.

Considering all that you’ve explored over the years, there’s a lot of range and you’re very elastic. But for audiences who’ve fallen in love with you through a certain genre of movies—with the likes of Me Before You and Adrift and Love, Rosie—I’d imagine Every Breath You Take can still seem like a big departure. When it comes to the balancing act and the desire to go against type, is it something you struggled with at any point in your career?

I think it more comes down to the choices I make for myself. I’d never want to play the same character twice. Obviously, if I was doing something like The Hunger Games where I’m coming back for a sequel, it’s a different story. But I think having the opportunity to portray someone completely different and learn something new—be it about culture or the world or a character or whatever it is—I think challenging myself each time is what’s important to me. At the same time, you know, I understand there is a sort of want and a desire for me to do things that I’ve done before so it is a balancing act. The age-old expression in Hollywood is, “Do one for you and one for them.” I mean, I don’t think of it quite that literally. [laughs] But I definitely enjoy the genre of romantic comedies. They’re the films that I enjoy watching. They’re the films that I enjoy being a part of. They’re the stories that I enjoy telling. They’re the characters that I enjoy playing, having the opportunity to sort of let loose and have fun. At the same time, I have to remind myself why I got into this profession: it is to sort of test myself, and to have the opportunity to portray and gain a better understanding of people I don’t understand usually. I got into this profession because I wasn’t a big fan of myself. I enjoy playing other people. I want to continue to push those boundaries and make departures from who I am as a person.

I wasn’t expecting you to say that.

And I do remember you saying in the past that your love of movies like My Best Friend’s Wedding and Notting Hill is entirely genuine. I love that. People sometimes poo-poo on certain genres. If the writing is good, what does it matter what genre you’re working in?

Yeah, I quite love a good story. I’m a hopeless romantic myself so I love a happy ending. My characters have met grizzly endings over the last few years. [laughs] But I think as long as the film or the story has a complete arc, be it a positive or a negative, and as long as I feel fulfilled as an actor in reading the script, that’s what leaves me happy obviously.

Is there a kind of role that you haven’t yet had the opportunity to sink your teeth into?

Oh, so many. [laughs] As I say, with every new project, with every new character, I challenge myself in a new way. I don’t believe that there’s one particular role or one particular thing that I need to explore. I mean, I want to explore the genres. I’ve never really delved that deeply into the action genre and I’ve always been very physical. I played soccer from such a young age. I think that’s definitely a genre I’d like to explore a bit more, but there’s no specific character or type, I suppose, that I’m desperate to do. I just want to do everything. I want to continue to work. I want to continue to push myself in whatever way that I can. So long may these challenges continue.