Rachel Brosnahan Is Our Woman

The Golden Globe winner on subverting gender norms, producing, and what it means to be “courageously female” at the helm. 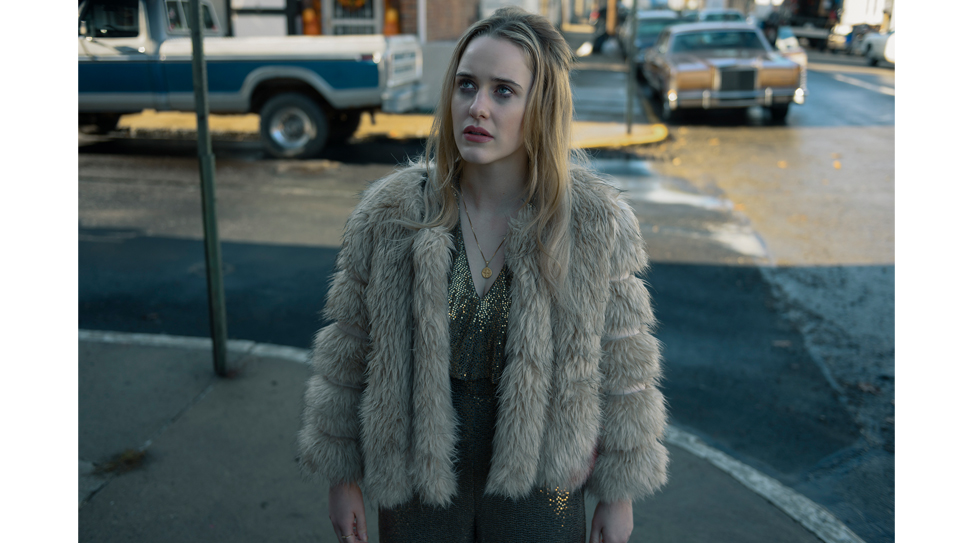 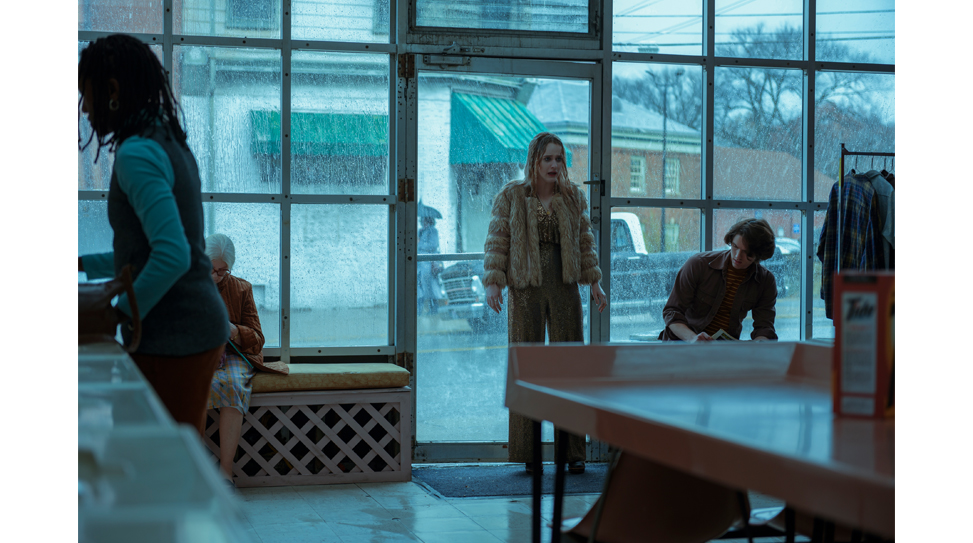 To be courageously female in a space that is so often male-dominated gives everyone permission to be the first version of themselves.

This year’s first-ever virtual edition of AFI Fest kicked off with Julia Hart’s I’m Your Woman, which crosses the nuts and bolts of a crime drama with that of a slow-burn character study. Rachel Brosnahan toplines as the trodden-on woman overshadowed by her male counterpart that is so characteristic of the 1970s thrillers that precede it, before traditional gender norms are subverted to tell the empowering story of a woman who takes the wheel, being shocked back into her life.

Soaking up the sun on her manicured lawn, Jean (Brosnahan) is first introduced as a privileged suburban housewife, who narrates her own backstory. She recalls falling in love with her criminal husband Eddie (Bill Heck). She’s vaguely aware of how her carefree life is bankrolled, but blissfully ignorant to the specifics of his job. Jean also admits that she and Eddie never had children, despite always wanting them. So when Eddie turns up one day with an infant in his arms, she assumes that it must be a bad joke. But it’s not. Jean is understandably confused, yet also resigned to never quite knowing what’s behind the curtain, being married to somebody whose shady exploits are forever in the dark. She intuits that the fewer questions asked, the smoother her life will go. Then, as quickly as the baby arrived, Eddie makes a fast exit.

When Eddie goes missing, a frantic gunslinger named Cal (Arinzé Kene) shows up to explain why she and the infant, named Harry, must go on the lam. Our fugitive is tossed into the night with a bag full of cash and, again, left with no room to ask any questions. Jean is torn out of her protective cocoon: a state of suspension and denial that, in keeping with the ‘70s setting, you might call suburban ennui. Until now a pampered possessor of negligible skills, Jean begins her odyssey. After careening through a series of safe houses and evading a coterie of murderous goons intent on using her to track down her husband, Jean finds herself huddling in a remote cabin alongside Cal’s family, including his no-nonsense wife Teri (Marsha Stephanie Blake), whose ties to Jean’s husband brings additional clarity to her conundrum.

I’m Your Woman is smartly and firmly locked on Jean’s evolution, and Brosnahan gamely feathers her hair and falls down the movie’s rabbit hole, ricocheting from sad to mad to catatonic. Audiences who know Brosnahan best for her snappy patter on The Marvelous Mrs. Maisel will be pleased to discover entirely new shades and depths to her ebullient charisma, in a dynamic role where she’s free to work with a far richer set of tools that was obviously always in her repertoire.

I’m inclined to call this a saga because Jean’s journey feels so high stakes, not only in terms of the unspooling of events but it also feels like a hero’s journey. There’s a tectonic shift towards self-discovery: Jean comes to realize that she’s far more capable than she ever gave herself credit for when her life is upended. Did this role feel very empowering for you?

Absolutely, and you hit the nail on the head. I’ve been referring to Jean as a quiet woman’s action hero. I find her journey incredibly inspiring. It also feels different, in a genre where sometimes men and women move fairly quickly from zero to hero, as it were—from zero to a hundred. I think about all those movies, for example, where somebody gets handed a gun, and then almost instantly, it feels like they’ve been shooting their whole life. I appreciate that this is a film in that familiar genre, but allows this woman’s journey to unfold frame by frame. It feels both more realistic than some of the journeys I’ve experienced before and also inspiring.

What about filling the role of producer on this project? What did you discover on that front?

It’s been an incredibly rich and fulfilling journey. I’m so grateful to Julia and Jordan [Horowitz, co-writer/producer] for elevating me into this position. I’ve been interested in producing for awhile. I’m really grateful that they offered to include me in their very special working relationship, on and off-screen. It was really special as an actor to occupy this role because, normally, we come in so late in the process. When you come in as an actor, the script is already developed, the character is fully baked, and we spend quite a bit of time talking to ourselves, pressing for these roles. It was a unique gift to be in the position of producer—and also an actor—where I got to spend so much time with this character and to be a part of her development from such an early stage. Also, it was a gift to be able to live with all of the different elements that make a movie and make a character come to life, from production design to costume design to the locations that Jean would live within. I think it enriched the experience and also the performance at the end of the day.

So often, motherhood is seen as some sort of a liability, at least in the workplace, which doesn’t exclude filmmaking. Here, seeing Jean transform from a suburban housewife living in her bubble to somebody to be reckoned with—with a baby in tow, who’s not a liability but a boon to her—feels weirdly groundbreaking. And I say weirdly because it should be the norm. I think the film really rewrites the blueprint for what we think it means to be strong.

Absolutely. Mothers are some of the strongest people we live amongst. Having had the great privilege of spending so much time outside of this film—and also within this film—with mothers who are made stronger and more capable by their experiences in motherhood has been really empowering. It was really fundamental to understanding this character. It’s also fundamental to the experience that you had and that some of the other audiences have had. It does feel different and it does feel groundbreaking, and so much of that is a credit to Julia. In a space that—you’re correct—doesn’t always welcome any kind of mix between motherhood and professional life, Julia occupies both spaces. She brings that to her role as a director, as a writer, and as a leader of a set. She is not only unapologetically who she is while in charge of this set, she is simply unapologetically and courageously female. And that shouldn’t even be a question, but it is. To be courageously female in a space that is so often male-dominated gives everyone permission to be the first version of themselves. That brought out an openness and a vulnerability in everyone that we had the opportunity to work with. It was a completely different energy than any other I’ve worked with before and I think you feel that, too, in every frame of the movie.

I understand that Julia brought her kids on location with her on this shoot, which perhaps fueled your experience even further. It’s also such a rare thing to have an infant as your primary scene partner. You mentioned to AFI Fest how you had never before spent so much time with a baby that age. Did this culminating experience affect your overarching outlook?

Yeah! I felt inspired to continue to make sure that different stories about mothers and different stories about women are told. It made me recognize how limited the experience that we generally see on screen about motherhood is. There are stories about mothers out there, and there are some that are incredibly bold and dynamic, but there’s still so much more room to embrace different women’s journeys towards motherhood and their struggles with motherhood. I learned about experiences that, as a woman who doesn’t yet have children myself, I had never considered before. It feels important and fundamental to understand women in the world and what they care about and what they think about—to be able to tell stories like this one, and more stories not like this one. Every woman I have talked to who is also a mother has talked about how motherhood and the struggles and the experiences that come with it has made them better at everything else they’ve done. Mothers are everyday heroes, and I’m so grateful to have had the opportunity to be a part of a film that celebrates that.

I like to believe that we’ve made a lot of progress in recent years, through #MeToo and BLM and everything else. Sometimes it’s really tangible: all five movies nominated for Best Film at the next Gotham Awards were directed by women. Women are now tasked with tentpole superhero movies, which wasn’t even on the table before. How far do you think we’ve come from what you can gather on the ground, and just how much more do we have left to go?

I feel very lucky to be coming into my own as an artist and also as a producer in this moment. I’ve seen the experiences that you’re referring to reflected back at me. I’ve had the opportunity to work with so many women. On the project Yearly Departed that we have coming out with Amazon at the end of December, almost all of the leadership roles were occupied by women. To be able to look around that production meeting—on Zoom, now—and see so many female faces looking back felt revolutionary, even though it probably shouldn’t anymore. But it does. So I feel very hopeful in this moment that we’ll continue down this path. It’s long overdue and there’s still so many stories that have yet to be told. There are so many storytellers that haven’t had the door open for them in the past. I’m really excited about what these next couple years of art will bring us on film and TV, and on the stage eventually when it comes back. So I’m hopeful, but also cautious. It is our collective responsibility to keep the momentum going and to keep all of these conversations alive.