The celebrated filmmaker on his nomadic life journey, the Israeli-Palestinian conflict and his latest feature film, Zaytoun. 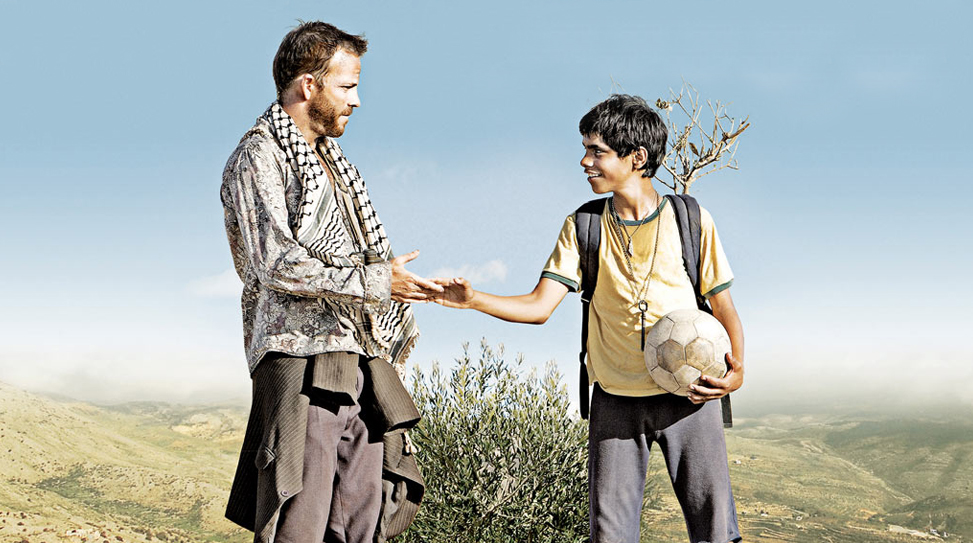 We live in a world of preconceptions, so I try to make the audience think, reflect and be open to changing their minds and their opinions.

Eran Riklis is one of Israel’s leading filmmakers. Born and raised in the US, the 59-year-old returned to his Israeli roots after spending much of his early life cultivating a global perspective, touching down in places like Brazil and London. He has quite a back catalog to work with—2008 was an auspicious one for Riklis’ Lemon Tree, which picked up the audience award at Berlinale—and he’s far better positioned to entertain new ideas nowadays. With such successful titles as Zohar and The Syrian Bride behind him, Riklis isn’t ready to put his feet up.

His latest feature film, Zaytoun, centers on the unlikely bond between Yoni (Stephen Dorff), an Israeli pilot, and Fahed (Abdallah El Akal), a 12-year-old Palestinian refugee who helps Yoni escape from his PLO captors during the first Lebanon War. What makes Riklis’ story about cross-cultural unity so compelling is the delicate balance of opposing forces. In this instance, they are steeped in the harsh reality of the Israeli-Palestinian conflict on one extreme and the freewheeling optimism ingrained within the mechanics of a classic buddy film in another.

Zaytoun opens in New York on September 20, to be followed by a national release.

At what point did film enter your life in a significant way?

Early like for most directors, I think. My father was a scientist, but he was also a camera lover and had many of them. He owned all sorts of cameras including, of course, 8mm ones and Super 8. He just gave them to me and I simply fell in love with them. Once I started experimenting and became exposed to the fact that I love telling stories, it was a natural growth.

Did you fantasize about making certain kinds of films when you started out?

An adaptation of One Flew Over the Cuckoo’s Nest was my first fantasy, but, alas, Milos Forman took it away from me. I think that book stayed with me for a long time (as did the unproduced scenes that I wrote) and made me understand that if you want to impart a message and a new way of looking at things, you have to also make people laugh and cry—feel. It’s all about feelings. In movies, I believe it’s also the magic combination of entertainment and deep, rounded storytelling that lets your audience think and think again about their preconceived notions about almost anything. We live in a world of preconceptions, so I try to make the audience think, reflect and be open to changing their minds and their opinions.

Is it generally difficult for Israeli filmmakers to sidestep stories that deal with the Israeli-Palestinian conflict because it’s such a blinding issue?

I don’t think it’s difficult and I’ve told many other stories with films like Playoff, Zohar, The Human Resources Manager, among others. Yet, I feel that it’s a duty to tell the story of my region. We can’t run away from it.

With Zaytoun, were you ever concerned about how much the viewers would need to suspend their disbelief in order to absorb the story? A friendship between an orphaned Palestinian boy and an Israeli Air Force pilot in 1982 seems unlikely.

I disagree. People who’ve been to war, people who live in areas of constant violence and danger—these people know that anything is possible. People look for a way out of their bad situations and they look towards hope, even if it’s surrounded by hatred. For me, as for others, this is a realistic story. You just have to believe in a bit of magic.

So-so… I don’t think the public was ready for it.

I understand you weren’t particularly fond of the screenplay in the beginning. What were the appealing elements that made you stick with it?

It’s not that I wasn’t fond of it. It was more that after Cup Final, The Syrian Bride and Lemon Tree, I felt I had said it all in regards to the Middle East. It wasn’t immediate love, but it was a process where I simply grew to love my main characters, Yoni and Fahed, and feel that they’re a part of me. It’s only then that I could tell their story.

Was the main crux of the story always there?

The main story was always the same. I think it was more about getting the perspective and point of view right.

This is Stephen Dorff’s best performance out of everything that I’ve seen him do, including Somewhere. What caught your attention during the casting process?

I agree and I’m glad you feel that way. I think what grabbed me was the fact that it was a challenge on the surface, yet I could feel he was right. Since I like taking risks, I felt this couldn’t be too much of a risk. And indeed it wasn’t. He worked very hard to become Yoni, the Israeli pilot. It took a lot of rehearsals, meetings with real pilots and prisoners of war, and dialogue coaching. In the end, what you see on the screen is Stephen, his charm, talent and charisma.

Based solely on past interviews that I’ve read, you seem very practical when it comes to things like casting an established, international actor in order to get appropriate financial backing and whatnot. Do stuff like that ever keep you up at night?

I don’t sleep much anyway. There are too many things to worry about and loads of new ideas to work on. It was not an easy decision to cast a non-Israeli, but I’m so happy with Stephen’s performance. I have no regrets at all. Quite the contrary, I think he’s wonderful in the film…and totally Israeli.

Abdallah El Akal is a great discovery as well. What’s the story behind him?

I cast him in a three-minute short I directed about four years ago called A Soldier and a Boy and he was amazing. It’s only after that I realized he had acted in over twenty films. It made me worry that he’s too much of an “actor”. I needed a realistic, streetwise kid from the Palestinian camps in Beirut. It took a lot of work to get him there, but once we did, he totally became Fahed. In real life, he’s more or less the same. He’s smart and charismatic with a lot of chutzpah.

You moved around quite a lot going from Israel to the States and Brazil to London. How did that kind of uprooted life inform you as a person and shape your voice as a filmmaker?

My travels as a boy, teenager and adult exposed me to a world of different societies, traditions, historical conflicts, politics (local, regional and global) and their effect on people. It exposed me to new literature, music, schools of thought, learning to be different while maintaining a firm grip on connecting with other communities as well as my own, expectations, culture and life. Eventually, all of this led me to want to tell stories and since I was fascinated by cinema from an early age, it seemed only natural that my storytelling tool would be cinema and its magic.

Did anything surprise you when you returned to Israel after spending time abroad?

Well, my most significant return was in 1971 after spending three years in Rio, Brazil where I went to an American High School called Escola Americana, which I can confidently say shaped who I am today. I had an English teacher, Mrs. Beverly Walter, who showed me, a kid from provincial Israel in post-Six Day War, that there’s a whole world to be explored. And I followed her. She brought us into One Flew Over the Cuckoo’s Nest, which was not the kind of literature I learned before. She took us into the world of the Beatles and showed us how a song like “Love Child” by the Supremes is more than just a pop song. So, I don’t think it was so much about coming back. It was more about coming from Israel, which was far behind in the 60s, and learning that the world is a fascinating, complex and complicated place, way beyond the troubles of the Middle East.

What can you tell us about your next feature, Dancing Arabs?

It’s a funny, sad and touching story. I love it, but it’s not done yet…