The auteur on Japan’s views on adoption, his use of autobiographical details in film, and his Palme d’Or-winning Shoplifters. 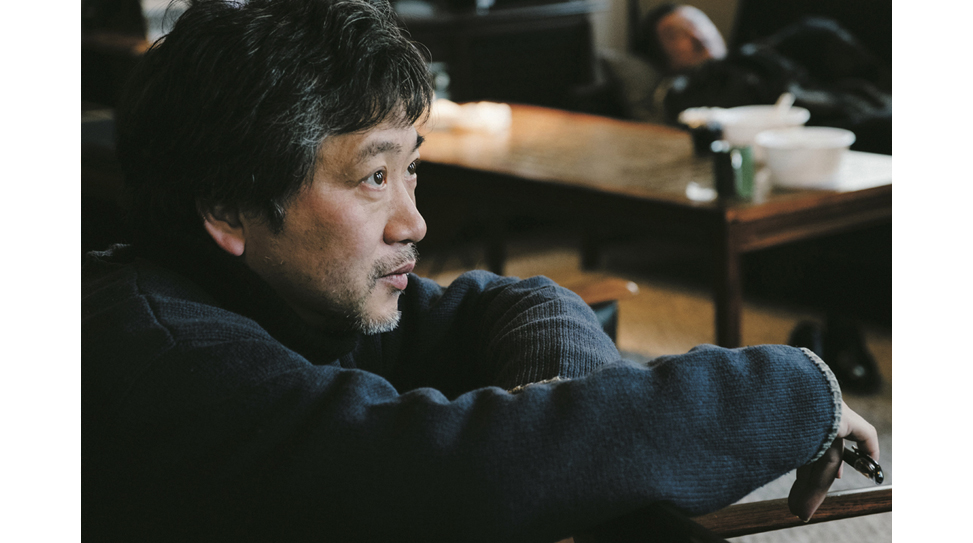 What held this family together is the crime. They were held together out of a sense of duty to commit this crime together.

The Palme d’Or winner at this year’s Cannes Film Festival, Hirokazu Kore-eda’s Shoplifters is a crowning achievement in the Japanese auteur’s body of work and a thoughtful addition to his perennial, generously humane inquiry into what constitutes a family, which he previously examined in 2004’s Nobody Knows and 2013’s Like Father, Like Son. Beneath even the sunniest of moments in the film’s peaceful domesticity runs a ground water trickle of misdirection that swells to a delta in its conclusion. When the hammer falls, it does so with devastating force.

Shoplifters is the story of a makeshift family that has collected around Osamu (Lily Franky) and his wife Nobuyo (Sakura Andô), who eke out a meager living working odd jobs. The Shibatas live in a cramped, run-down hovel on the outskirts of Tokyo, along with their pre-teen son Shota (Jyo Kairi), Nobuyo’s younger sister Aki (Mayu Matsuoka), and their frail grandmother Hatsue (Kirin Kiki), whose monthly pension keeps the impoverished family from falling apart completely. That money is also supplemented, however, by Osamu and Shota’s daily shoplifting expeditions.

One winter’s night, at the end of one of their grocery-theft outings, Osamu and Shota come across a 4-year-old girl named Yuri (Miyu Sasaki) left out in the cold and seemingly abandoned, and bring her back to their home for a hot meal. Although it turns out that she’s not an orphan after all, when the family discovers signs of abuse on her body, they decide to take her in permanently—cutting her hair and rechristening her Rin. The informal adoption, which constitutes kidnapping, charges the narrative with a tension that gradually sours the film’s sense of idyllic rapture, and this tension is exacerbated by dissonances that reveal this cute little familial unit to be an illusion.

Shoplifters is much tougher than it initially appears, especially as the film reveals Hatsue, Osamu, and Nabuyo to be more advanced and severe criminals than one would expect, given the pains to which Kore-eda has gone to render them dear to the audience. In other words, Shoplifters has secrets to tell—hard truths that unlock meaning and a lot of tears. The Shibata family is not quite who they claim to be—in a legal sense—but in practice, they’re never anything but themselves.

I was disappointed to hear that you wouldn’t be attending the New York Film Festival last month. But I’m glad that we can at least connect now via phone.

There are a lot of things to unpack in Shoplifters. One thing you communicate rather strongly is how love can define a family unit outside of blood relations. I wonder how this idea is viewed in contemporary Japanese culture.

I can tell you that it’s the same in South Korea.

The film’s tag line reads: “Only the crimes tied us together.” When did you first learn about pension fraud, which has become quite a widespread problem in Japan? It really opens up this otherwise intimate family drama into a larger, societal context.

This project has been with me for about three years now so it’s three years ago that I first started hearing about pension fraud. But also, at the same time, I read about families that would shoplift together. Now—I don’t know whether they were blood-related or not, but it was a news item that talked about how the whole family was shoplifting. What held this family together is the crime. They were held together out of a sense of duty to commit this crime together. In that sense, I read these articles and that’s what inspired me.

Like Father, Like Son, Nobody Knows, and Shoplifters are essentially home dramas that center on interpersonal relationships within the immediate family. Getting more specific, how autobiographical was the father and son dynamic in Shoplifters?

I was raised in a family that was related by blood. But I lived in a similar kind of house. It was a very small house with two rooms, and there were six people living in there so there wasn’t a whole lot of privacy. As a result, I claimed a closet for myself and that would be my own private space. When you see the little boy peeking out between the doors from the closet, that’s very autobiographical. That is me because I used to do that—look out at the family doing things from the privacy of my little space. Also, when I was a child, my father worked at a factory. I really respected and admired my father. One day, I went to the factory where my father worked and realized that he was being treated very disrespectfully. For the first time, I saw my father who I respected in a different light. I was very embarrassed by that. I made an effort to not let him know that I had seen this different side of him. So I wouldn’t say that my childhood strongly informed the movie as a whole, but rather, in details like this. Shota spends a lot of time thinking about it. He knows that there’s something about his father that’s not respectful—something he didn’t want to know. He hides it because he doesn’t want his father to know that. Those are the similarities.

Even though the film leans into an unexpected, darker territory towards its conclusion, it’s actually quite uplifting because there’s a sense that all the characters learned invaluable lessons that energize them moving forward. You root for these petty criminals to succeed. Was that what you set out to communicate?

That’s very interesting you feel that way. In a sense, you watch the movie for two hours and get to know all the characters, but ultimately, they are criminals. By having that process of getting to know them and getting familiarized with them, and then realizing in the end that they are criminals, you’re kind of torn—the audience is torn. No, we don’t want the family to break up. We want them to stay together. And the other half will say, “They did something wrong so they need to be punished.” You tear the audience apart in a way and that forces them to think about it. So I’m very happy that you sensed that. It’s true that the family does fall apart, but two things come out of it: one is that the son has matured—there’s no doubt about it—and he’s moving on with his life in a different way, and the little girl is also changed. She’s able to say “No” and shake her head at her birth mother. She’s able to appreciate that there’s a wider world out there and she holds a different perspective. To me, both of those things give hope.

I read an interview with your amazing DP on this film, Ryûto Kondô, and he mentioned how shooting on 35mm is something you don’t compromise on as a director. He added how, in fact, shooting on film is very much part of your workflow, including the time spent on set changing the rolls and everything.

First of all, Mr. Kondô is probably shooting half film, half video nowadays so he does both. Certainly, more and more, film is moving towards digital, that’s true. The Third Murder was actually digital. I did not use film on that one. So it’s not that I never do it—I think there’s still poetry to film that doesn’t happen with digital. I realize that even if you do it on film, it will ultimately be shown in a digital format. Maybe someone will say, “Well, it’s not going to make a difference.” To me, the visual perspective is somehow different with film than with digital.

You’re known to work with very malleable screenplays. You continue to write every day while filming, adapting to whatever’s happening on set. For instance, the scene where Yuri loses her tooth—that was improvised, right?

It wasn’t in the script. On the first day of shooting, she did lose her tooth and we just made a scene around that. Yes, I do change things a lot on site.

Could you give me another example from Shoplifters where that happened?

Another time that occurred was the scene where it’s snowing. We had not anticipated the snow at all so it wasn’t in the script. When it started snowing, I created the scene with the snowman. That was in response to the unexpected snowfall.

How far along are you now on your next film, The Truth, starring this incredible international cast [Ethan Hawke, Juliette Binoche, Catherine Deneuve, Ludivine Sagnier]?

It’s been ten days now since we started shooting The Truth and it feels a little bit like the engine is just beginning to warm up. I still have a long journey ahead of me. However, certainly, it’s very stimulating and enjoyable, and I’m looking forward to continuing the shoot!