The Game of Thrones star on growing up on the biggest show in the history of television, its final season, and his next life steps. 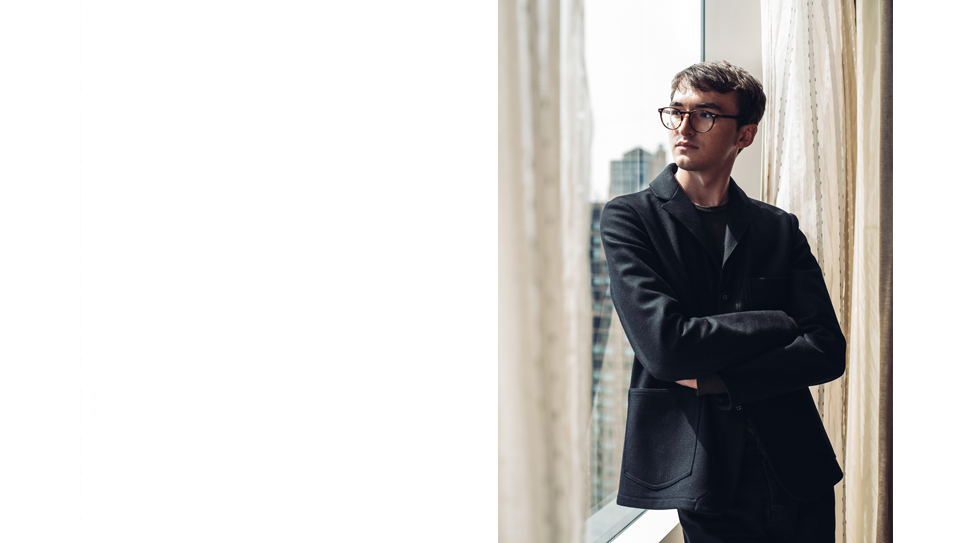 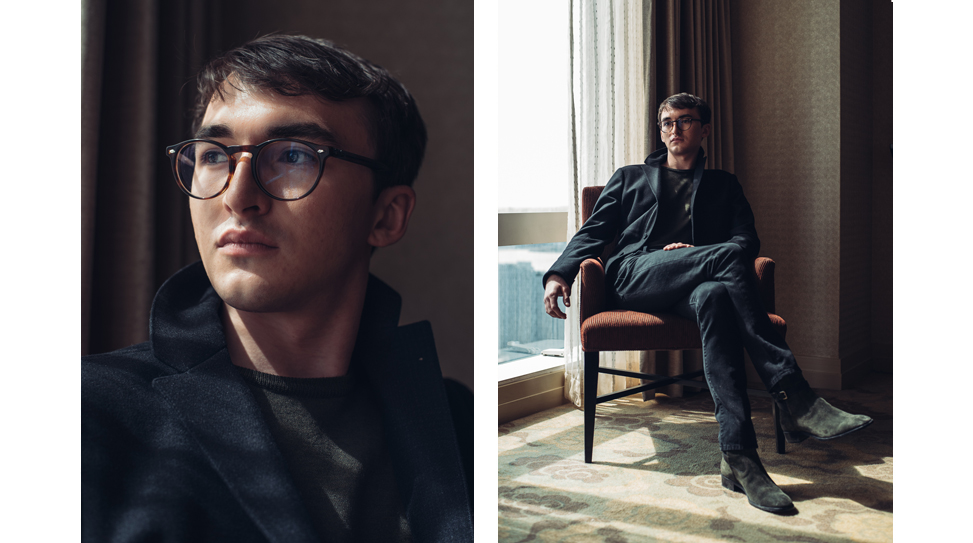 Game of Thrones has actually changed the entire landscape of television. Very few things have.

Game of Thrones has been really ramping up the countdown for fans ahead of the final season’s premiere this Sunday. We’re now just one day away from the return of Game of Thrones, and HBO knows we’re desperate for that Westerosi content. For our part, we had the pleasure of sitting down with Isaac Hempstead Wright in New York City last week for a conversation.

Game of Thrones fans have watched Bran Stark go through many different forms throughout this series. First he was the exuberant boy who fearlessly climbed the towers of Winterfell. Then he was the young lord confined to a chair after his tragic fall. Then he was the fugitive on the run, learning to walk through the eyes of his wolf. Now, he’s not Bran, but the new Three-Eyed Raven.

Considering Bran Stark’s abilities as the Three-Eyed Raven are mysterious and powerful, his possibilities for Game of Thrones Season Eight are endless. Fans have spent years sifting through his visions, his trips into the past, his connections to history, and the vague purpose of the new Three-Eyed Raven to find clues to what role he’ll play in this long-awaited conclusion.

The six-episode final season of Game of Thrones begins on HBO on April 14th.

My photographer tells me that a mob has formed outside the hotel. You better make a run for it when this junket is over.

I went back to watch some of your earliest episodes. You were so young back then! We’ve literally watched you grow up on this show. You got way taller. The sound of your voice started to change in Season 4. In terms of the craft, how has your thoughts on acting evolved since this all started?

Naturally! When I started, I was a 10-year-old. I wasn’t a trained actor at all. I’m still not a trained actor. I was pretty much a kid playing a kid, more or less. I didn’t have to actually transform myself to play Bran Stark and that was true, really, all the way to Season 6. It was quite easy to find Bran because he was a kid, albeit in a different world with certainly harsher things to contend with, but he was still grounded in your average kid. Season 7 kind of coincided with when I became an adult, and it was great because I realized that I could actually try and do something cool with the character. I could find a way of actively transforming myself to become a different character, which was something I hadn’t had a huge amount of experience with before. I really enjoyed and relished the challenge of being this whole new, weird character. Not many actors get to suddenly, completely switch roles on the same television program so I just really enjoyed that. It was quite a difficult one because an omniscient character who’s emotionally removed can become quite boring. They’re just speaking in the same tone and they know everything and they’re weird. It was about keeping that emotional detachment and that weirdness, but keeping the mystery and keeping something compelling about the character to make people excited or interested to see him onscreen, rather than just, “Ugh. There’s that guy that knows everything again.”

It’s such an intriguing character arc. I love how you described the new Three-Eyed Raven in the past: “The history of the world has been downloaded into his head. He’s the world’s biggest CCTV archive.”

Yeah, it’s crazy. That is kind of what he is. He has the goods on everyone. He can look up anything he needs. I mean, I can’t imagine a better superpower to have. There’s no teacher like history. Bran has access to all of it, even the history that no one will ever know—the secret histories. So I think that just makes Bran an incredible prospect.

Can the new Three-Eyed Raven see what happens and has happened in Westeros or also beyond it?

I actually don’t know. I mean, I basically know as much as everyone else in terms of how his powers work. I would assume he can see everything in the world. But are there only Weirwood trees in Westeros? Because his power lies within the tree… Maybe he can only see in Westeros. I’m not sure! That’s a question for David [Benioff] and them.

I’m obviously not gonna be asking you what goes down in the final season.

I can’t tell you anything!

What do you imagine would happen if an actor revealed something, even by accident?

I think we’d be sued for the rest of our lives. There’s someone from HBO staring at me as I say this right now. [Laughs]

From what I understand, you went to an open casting for Game of Thrones when you were just 9 years old. You’ve also said in the past that you fell into acting “almost unintentionally.” But you also starred in The Awakening the same year the show started airing. How did that come about?

That was actually after I had done the pilot of Game of Thrones. I mean, it’s hard to think back because I was still so young then. I used to go to drama group. I think I did kind of always think, “It’d be fun to be an actor,” in the same way I think all kids think it’d be fun to be an actor or a film star or a rockstar or a sports personality or whatever. I went to drama club because I just had fun. I just liked playing drama games and it was just about having a laugh. I wasn’t going up for auditions because I wanted to make it in the film industry. I was doing it because it was an exciting thing to do as a 10-year-old. Game of Thrones was an open casting, I did it, and now here I am 9 years on! Now we have the final season coming out.

What an amazing place to end up.

Speaking of which, I asked Rebecca Hall what she has remembered from The Awakening shoot a couple years ago and she said, “Spending endless time walking down corridors, holding a really heavy lamp.”

What do you remember?

I just remember spending weeks and weeks in Scotland in loads of stately homes. We shot in three different, big stately homes. Yeah, I just remember having great fun. I think that was probably the longest I’ve ever been away from home with my mom. We spent all this time in various parts of Scotland, and we were in Cheshire at one point together. What else do I remember… I have vivid memories of the hotel we were staying at, which was in a town called Kelso on the Scottish border. It was a really quiet, lovely little fishing town. I remember having a lot of fun there.

It’s not an exaggeration when I say that in all the interviews I’ve done with actors since Game of Thrones started airing, I would ask them what project they wished they were a part of and the majority of them would say your show. It’s the dream.

Game of Thrones has actually changed the entire landscape of television. Very few things have. There are only a couple of real pioneers in there. Breaking Bad as well. These are shows that completely broke the taboo about TV. To everyone, TV was always a dirty word. It was cheap and not very well thought out. Now it’s what everyone wants to get into. It’s been quite an extraordinary thing to be part of something that is so long, and you get to play characters that develop so much. I think it’s just an unparalleled cinematic experience. People have spent 67 hours so far and they’ll have spent 73 hours at the end with these characters, with these stories, with this world. That’s a lot of time. It’s so immersive and the production value on Game of Thrones is one of the very, very best of anything—of any film or any TV program ever made, especially with Season 8. It kind of makes me relieved we’re not doing another season because there’s no way on earth we could possibly do any better than what we’ve done this year. We put so much time into it. It’s taken 9 months to film only 6 episodes. It usually takes us 6 months to film 10 episodes. The budget I think has been astronomical. The time spent rehearsing, and the time spent thinking and crafting it all, have just been truly extraordinary. It’s such a mad, incredible thing to be a part of.

Did every member of the cast receive the same scripts on the final season?

Yeah, we all got the full scripts for the table-reads.

What was it like to take off your costume for the very last time?

Crazy! It was really, really, really bizarre because putting on that costume is such a ritual at your day of work when you’re an actor. You grow to hate it! [Laughs] You’re like, “Oh god, not this stupid buckle. Not this stupid belt.” It’s too hot, it’s too cold, too itchy or whatever. But I found myself taking it off going, “Please let me put it on one more time!”

Did you get to keep it?

No, I didn’t, sadly. My last actual day on set was when we were doing the EW [Entertainment Weekly] shoot and I just ran through the set because I was like, “Shit, this is gonna be the last time I’ll be on this set!” So I grabbed whatever I could. I grabbed a straw bowl, a wooden spoon, and a little wooden tub. It was pretty shit. I literally grabbed kitchen utensils.

Your filmography is understandably tidy since you were committed to Thrones for such a long time. Now you have a film coming up called The Blue Mauritius. Was it difficult to choose the “right” project with the show ending? It’s a new beginning for you.

Definitely! You gotta take your time because you’re coming off something that is—there are gonna be very few Game of Thrones again, certainly in my lifetime, if any. The chance of me being involved on one of those again is pretty much zero. So you gotta take the time to sort of find the right thing for you. I think it would be a really silly idea to rush into anything. The lucky is, and the crazy this is as well, I’m only 20. I’m literally just starting my life so I’m taking my time to find out what the next project is for me, what kind of genre I’m into, and really find my style. So yeah, we’ll see.

You’ve always been asked an awful lot about your studies outside of acting. You were at university studying neuroscience during Game of Thrones and then dropped out.

So you’ll be juggling the two.

You’re really impressive, Isaac. Let me ask you this: Were there projects over the years that you wanted to take part in, and opportunities that you had to turn down, because your schedule on Thrones simply wouldn’t allow it?