Are young, starry-eyed actors—with their natural proclivities for fame, the riches, and career longevity—capable of resisting the temptations of Hollywood and its towering system of “winner takes all”? Well, just look at Jesse Eisenberg. As you’ll go onto read, the 26-year-old refuses to let that kind of lethal environment cloud his optimism. In fact, he’s [...] 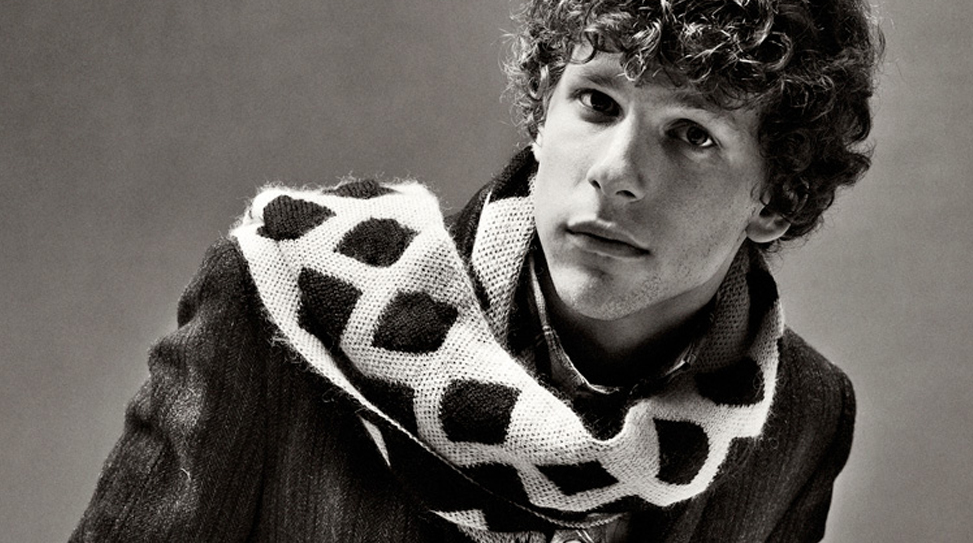 Are young, starry-eyed actors—with their natural proclivities for fame, the riches, and career longevity—capable of resisting the temptations of Hollywood and its towering system of “winner takes all”? Well, just look at Jesse Eisenberg. As you’ll go onto read, the 26-year-old refuses to let that kind of lethal environment cloud his optimism. In fact, he’s more than happy to remove himself from it entirely. And this kind of incongruous attitude hasn’t affected his flourishing career in the slightest.

Although Eisenberg already boasts a certain level of fame in the industry—largely owing to his starring roles in films like Adventureland and Zombieland—2010 appears to be his most promising yet. With three films hitting theaters this month alone—Solitary Man, The Living Wake, and High Rollers—the rising star may have finally scored his ticket to the A-List with his upcoming lead role in David Fincher’s The Social Network in which he plays Facebook founder/social media kingpin Mark Zuckerberg.

It seems appropriate then that we begin the interview by introducing Eisenberg to one of the biggest social networking tools out there for the first time.

Is this really your first time using Skype?

Yeah, I’ve never done this before.

I appreciate you trying your hand at it.

So, how did you get your start in the industry? I think you started out when you were fairly young?

I started doing children’s theater when I was, like, 8 and my first film came along when I was still in high school. I knew it was a super risky profession to get involved in, but I decided to keep pursuing it thinking that I might have a good chance.

Did you find it difficult juggling school with acting?

The primary reason for me wanting to get into acting when I was younger was to get away from school. I felt really miserable in school. Acting was an excuse for me not having to hang out with friends after school. I would just go to rehearsals instead. I wanted to avoid all the uncomfortable social aspects of school.

Why did you defer your admission to NYU?

Well, the first film role that I got during high school was actually set to begin shooting in October 2001, right when I was supposed to start up at NYU. I told my father how I’d gotten into this great movie and he told me, “Absolutely not.” But after reading the screenplay, he changed his mind thinking that it would be good for me.

Did you end up going back?

I never went back to NYU, primarily because it’s so expensive. I’m going to New School right now. I have like 11 credits left to finish. It’s for an anthropology degree.

You didn’t want to study acting?

Yeah, I wanted to study something different. I’ve been to acting school before and I helped teach a class two years ago in the NYU acting program. I like being in acting classes, but I don’t like being in them enough to do it every day. I find it so exhausting. I have other ambitions like writing plays and books. There’s an unlimited amount of knowledge out there to absorb. It’s not just about acting.

I finally got around to watching Zombieland last night. The pairing was certainly unexpected, but you and Woody Harrelson make a great duo. What was it like working with him?

He’s great. He’s actually a really laidback and normal guy. I’ve never worked with someone who’s as good at improvisation as he is. I don’t know how he’s able to keep a straight face during scenes and not laugh. I mean, I’ve worked with some great comedians like Bill Hader and Kristen Wiig from “Saturday Night Live”—they’re comic geniuses. But Woody didn’t break once, which is very rare. I think it’s partly because he came at it from a very dark place. Even though the film is meant to be silly in a lot of ways, he was coming at every improvisational opportunity from a dark place. I was really astounded by that. The nature of the movie is such that the two of us come off as exaggerations of who we actually are probably. That funny dynamic was already written into the script.

I hear there’s a sequel on the horizon. Can you confirm or deny?

I think they’re just starting to write that now. It’s in a much earlier stage than the Internet probably indicates. If the script is good, I know all the people who were involved with the first one would love to do it again. I think it was really hard to figure out what the first one would turn out like while making it because of its unique tone, but we were all so pleased with the result.

I think the film blends comedy and horror so well because it’s self-aware of its own genre. I mean, it’s obviously not intended to be straight-up comedy or horror. It’s very different from Shaun of the Dead too, which is much more slapstick. I think Zombieland falls somewhere between Scream and Scary Movie.

Exactly. Are you a big fan of horror?

Not so much anymore, but I used to be. I watched all the 90s slasher films in high school. Scream definitely made a big impression on me. You actually worked with Wes Craven on Cursed a couple of years ago. What was that like?

Wes is nothing like what you’d expect him to be. He’s very quiet and gentle. He used to be a history professor and now he’s this intellectual type. His personality just doesn’t resemble the kind of movies he makes at all. He’s not this manic, horror aficionado. I guess he probably approaches the horror genre from a very analytical place, which really accounts for their effectiveness. It feels like we shot Cursed, like, four different times because there were so many reshoots. We shot for like 120 days when a normal film takes 30 because the studio kept asking Wes to change stuff. But he remained very calm throughout the whole thing.

You also worked with filmmakers like Noah Baumbach, M. Night Shyamalan, and David Fincher. Is it important that big name directors are attached to projects that you’re considering?

This might sound stupid, but not at all. For me, the two really important things are how good the script is and whether the character I’d be playing is interesting. I don’t know enough about filmmaking to understand what a director really does. I know that might sound naïve and maybe falsely ignorant. I’ve also worked with several first time directors like on my first film Roger Dodger and it turned out amazing. So, I never think about who’s directing. Was I happy that David Fincher was directing The Social Network? Yeah, because I know he’s a great director, but the script was already fantastic and I would’ve loved to do the film regardless. You can usually tell from the top half of the first page of a script if something’s going to be good. And I don’t mean this hyperbolically; it’s literally the top half of the first page. It’s where you immediately pick up on the tone of the film and its overall writing style.

How did you get involved with The Social Network?

I just read the script and auditioned. I was lucky enough to be cast in it.

Did you get to meet Mark Zuckerberg when you were preparing for the role?

I never met Mark. Even though we’re playing characters that are based on real people in the film, the screenplay and the book it’s based on showed a lot of insight. It was a very comfortable research process for me.

I don’t. Nor do I go to the movies. I don’t own a television in my house. I am, for better or worse, not exposed to anything that makes me want to take up a blog or something like that. Not being exposed to all that stuff is also sort of a defense mechanism for me, just not being inundated with media all the time. New York is so full of stimuli; there are just so many other things that you can do with your time.

I’m going to go on a bit of a tangent here. I wanted to ask you about the comparisons that are frequently made between you and Michael Cera. There’s actually an article online called “The Definitive Differences Between Jesse Eisenberg and Michael Cera.” How did this all start?

I don’t know. I’m actually not exposed to it because I don’t look myself up on the Internet. We were both in movies directed by Greg Mattola. When they were promoting Adventureland, they billed that film as “From the director of Superbad” because it was such a big hit. I think that might be part of the reason. It’s really not a part of my life at all because, like I said, I don’t read stuff online. I don’t really know how to account for that. When Adventureland came out last year, people kept asking me if I was similar to him. I don’t see it because I try to look at myself objectively.

I don’t see the similarities either. Michael Cera can’t act, let alone emote on screen. And I don’t care if that’s his shtick. It just seems like people want to create this imaginary rift between you guys for whatever reason.

If there’s a rift between actors in movies, we’ve reached a sad place. [Laughs] Some people have posed hypothetical questions to me in the past like, “If you were in a fight with this person… ”—I think stuff like that is so silly.

Do you feel very much a part of the young Hollywood scene?

I don’t consider myself a part of that. I can’t really speak for that community. When I was filming for the past four or five months in Los Angeles, I rarely left my hotel room. And when I did leave, it was to meet up with friends who have no involvement in the industry. There are definitely ways to stay out of it if you choose to. I think people write things about me online because I’m in movies obviously, but I never read any of it. I feel very distant from all that stuff even though the public perception of me is there, which is probably very minimal because I’m not very famous. Frankly, I do nothing to promote it. To me, it’s 99% irrelevant.