The Vampire Diaries’ actor on awards season, the launch of his production company and FOX’s forthcoming miniseries Gracepoint. 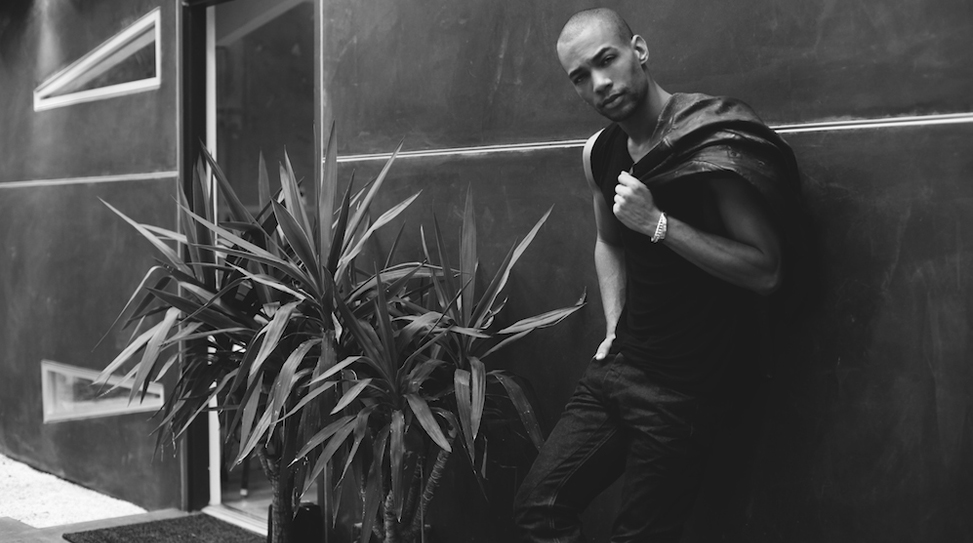 I was always in the arts. My mom always had us in music. That’s what started it because I come from a family of musicians.

Kendrick Sampson might be teetering on the precipice of something big in 2014. Born and raised in Houston, Texas, the up-and-comer has already acquired, in Hollywood fashion, the typically reductive label of ‘teen heartthrob’. Sampson is best known for diving headlong into The Vampire Diaries hysteria during the series’ fifth season at the tail end of last year. After plumbing tween terrain to portray Jesse, a disarmingly sweet college upperclassman-turned-vampire (presumably axed after five episodes), he’s about to have a serious moment.

Not one to simply coast along on his honeyed eyes and pearly white smile, Sampson is abandoning the life a CW network effigy—again, perhaps temporarily—to figure prominently on Fox’s upcoming prestige miniseries Gracepoint, which adds more firepower to a cast that already includes David Tennant, Anna Gunn, Jacki Weaver, Nick Nolte, Kevin Zegers and Michael Peña. Gracepoint is Shine America’s redo of UK’s much-praised murder-mystery Broadchurch, which made numerous top ten lists, thanks in part to its exposure on BBC America.

Anthem spoke with Sampson just days before he’s due in Vancouver to shoot Gracepoint.

I’m glad we’re able to chat before you fly off this weekend. Congratulations on the new show.

Thank you very much.

How long will you be up there shooting?

I’m not completely certain. If I were to estimate, I think it will take five to six months since it’s a 10-episode season. It’s still very much in the planning stages.

Is this your first trip to Canada?

I’ve never been to Canada before. I’ve been to very few places outside of the United States. I can count them on one finger. [Laughs]

Are you looking forward to anything in particular apart from working while you’re in Vancouver?

I mean, I love other cultures and visiting new places. I’ve only been to the Bahamas, so I’m just excited either way. It’ll be amazing. But my number one excitement is checking out the food.

So the new show we’re referring to is obviously Gracepoint. The turnaround for this seemed super fast. You just joined the cast, didn’t you?

It was pretty unexpected and abnormal. I had one audition and they cast me. That’s not normally how it goes at all. It was very short and fast. Usually, the process is pretty extensive.

If I remember correctly, the turnaround for The Vampire Diaries was even quicker for you.

It was. Well, it was about the same, but the only reason it seemed quicker was because of travel. Both of the shows had a quick turnaround, but the travel for The Vampire Diaries went like this: “OK. You booked it. You’re flying out tomorrow morning.” For Gracepoint, at least I have time to pack and everything.

Is that one of the more challenging things about working in TV? How do you even have time to prepare?

That is one of the more difficult aspects of TV. It’s the same way on some films, depending on where you fall on the callsheet or it’s just a matter of timing. Sometimes you just have to be on set the next day, but that happens more often in television. It’s all very quick. With Gracepoint, I think I’ll have more time to prepare than usual. We have such an incredible cast that I think they will be more mindful of giving us time to prepare. I’m not going to say that I don’t need the time, but honestly, the scripts that I’ve read have been great. Everything falls into place.

What is Gracepoint about, and who do you play on the show?

I’ll be playing a character named Dean Iverson. As far as what I know I can say, Dean works part-time at his uncle’s restaurant to pay for college. He’s dating Chloe, the daughter of the father of the boy who the mystery is surrounding in town. I believe I can tell you that… [Laughs]

This is a remake of a BBC show called Broadchurch. Is your character Dean Iverson in the original series or did they rework the story and the characters quite a bit?

I’m not sure if his last name was Iverson in the original show, but his first name was Dean. They’re sticking to the story pretty faithfully. The creator of Broadchurch wrote the first episode of Gracepoint. And, of course, they’re bringing David Tennant over from the original, which is amazing. They’re sticking to a lot of the same story. The only thing different from what I understand is the ending. They’re also extending the season by two episodes as opposed to the eight episodes Broadchurch had. So there will be some differences, new twists and things. But Dean will be the same.

I don’t want to dwell on The Vampire Diaries too much because I’m sure you’ve been bombarded with every possible question out there. It’s just insane when something like this comes along—the hysteria. You Google “Kendrick Sampson” and your name might as well be “The Vampire Diaries”.

[Laughs] For one, it happened so quickly. People on the show did warn me about this as I booked it. Even though I was like, “Oh, it’s OK. It’ll be awesome. It’s a great thing.” And they would say, “No. You don’t understand.” [Laughs] The fans of the show are absolutely amazing. They make you feel very good about yourself.

So? Are you coming back or not?

Growing up in Texas, how did your eyes open up to acting? Was it an end goal for you from an early age?

You know, I have no idea. I was always in the arts. My mom always had us in music. That’s what started it because I come from a family of musicians. That transitioned into musicals and then theater in school. Honestly, there’s nothing profound or anything. I wasn’t watching one of the greats and wanting to be like that. I think I was around 11 when I saw a Gap commercial and said, “I want to jump on a trampoline.” [Laughs] My mom told me, “Find an agent then.” She gave me a newspaper and I found an agent. That’s pretty much it.

We’re in the thick of awards season now. Do you keep up with stuff like that?

Absolutely. Yes, I do. I’ve been obsessed with it over the years. It’s so crazy right now and it’s hard to keep up with everything, but I definitely always look forward to seeing the Oscar nominations. I kept up with the Golden Globes. I like to check up on the SAG Awards and the Critics’ Choice Awards. I have somewhat of an obsession with playing a game with myself to see who will win.

Who or what are you rooting for at the Oscars?

Oh man… That’s a hard one. You know what actually? I’m really excited about Leonardo DiCaprio. Every year he does something that blows me away. He’s been winning a lot this year for Best Actor in a Comedy, which I’m sure is interesting for him because he’s a dramatic actor. He probably wasn’t shooting for a lot of comedy in The Wolf of Wall Street. He was amazing and he’s hilarious in it. Matthew McConaughey killed it in Dallas Buyers Club. Lupita Nyong’o and Chiwetel Ejiofor are amazing. The whole ensemble of 12 Years a Slave was ridiculous. I’m a huge David O. Russell fan. Jennifer Lawrence is ridiculous and I have a pretty big crush on her. I could go on and on with this.

Do you make New Year’s resolutions? What are you most looking forward to in 2014?

Growth. I kind of made a recommitment to prayer. I’m really looking forward to growth in that. Also, building my production company. It’s been a crazy year already, so my resolutions are constantly changing.

It’s called Sampson Studios. It’s just hard right now because I’m so busy and haven’t been able to focus a lot of time on that. Hopefully, depending on my shooting schedule or after shooting this season of Gracepoint, I’ll be able to really focus on producing films. Nothing anytime soon though. I have a 5-year plan and I’m really excited about it.