The filmmaking duo captures the life of a fishing boat in a documentary that’s unlike anything you’ve ever seen. 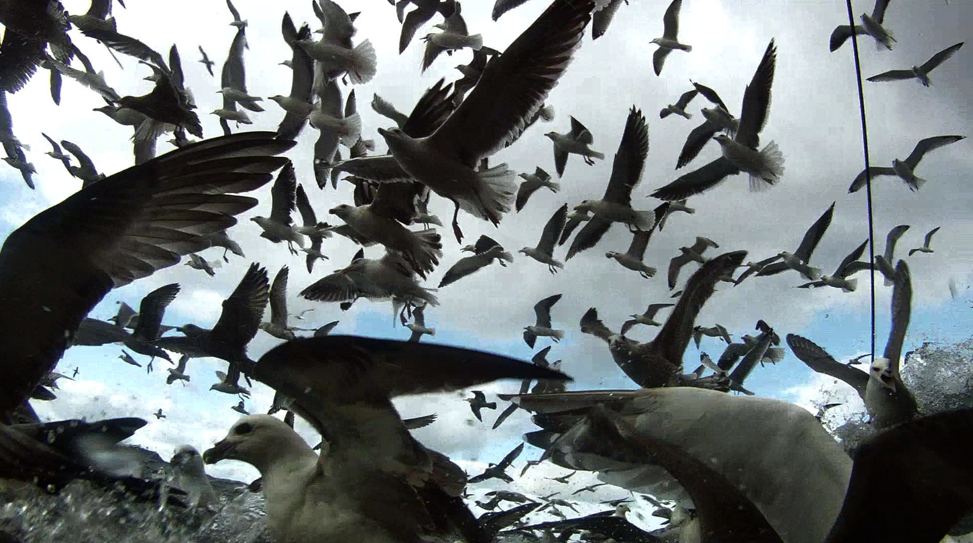 You felt the incredible, repetitious power of humanity and industrialization. Simultaneously, we felt like an insignificant spec on this larger seascape where you could die tomorrow and nobody would even notice.

Leviathan, a sumptuous mix of observational filmmaking of the direct cinema movement and the experimentations of the avant-garde by Lucien Castaing-Taylor and Verena Paravel, seems incomprehensible. The film is an odd cookie to describe and truly unlike anything the medium of documentary film has offered up before. The approach is radical and modern, only possible now: Castaing-Taylor and Paravel took dozens of miniature GoPro cameras—durable, versatile camcorders favored by extreme sport fanatics—and fixed them in and around every available crevice, mast, deck, or fisherman’s helmet, capturing the treacherous rhythm of a hyper-stimulatory commercial fishing boat just off the shores of New England. Every throb, swoosh and splash is palpable: cameras plunge into the drink, careen wildly, skid and glide like refuse, and launch well into the air. It becomes so that you can no longer ask yourself how such and such shot or effect was achieved; its impossibility is central to the disorienting effect in the sense that you’re seeing the world as nobody does and there’s magic in not knowing. Life on the boat is living life on the edge, and Leviathan is by all counts an impressively potent work.

Leviathan is now playing at the IFC Center in New York City.

One of the things that’s very striking about this film is that it’s almost impossible to categorize within the context of documentaries. It’s more akin to a living portrait.

Lucien: Neither of us were trained as documentary filmmakers. Neither of us were really trained as filmmakers at all, so we’re not invested in making documentaries or something that looks like a documentary in the traditional sense. We’ve watched documentary films, anthropologic films, avant-garde films, experimental films… We don’t really bother with boundaries of filmmaking because it seems artificial to us. This film is definitely invested in capturing realism. It’s not acted, scripted or preordained in any way. It’s a work of non-fiction, but it also feels fictional because it was created in the middle of this black, oceanic nowhere. It’s a microcosm of the universe, which has no space-time bearings. It comes into being as its own progressive space, which seems fictional. I guess it’s true that we see documentaries and most of them tend to bore us and we wouldn’t want to make films that resemble them, especially because they aren’t experimental and they’re more concerned about telling you about the world and edify you or communicate something that is propagandistic.

What drew you to the lives of fishermen and why was New Bedford a place of interest?

Lucien: We wanted to do something with Boston for personal, domestic reasons. We were both interested in New Bedford, a town that has a huge, historical importance as being the whaling capital of the world. It’s the largest fishing port in the country, actually. It has fallen increasingly hard scruple at times and whaling went progressively downhill. Its almost impossible to make a living as a fisherman in this day and age. Textiles and mills were keeping the place afloat to a certain degree, but it has one of the highest rates of unemployment, poverty, criminality and drug addiction. So we were interested in working around New Bedford and maybe doing something about fishing. We even thought about maybe doing something about the sea without really seeing the sea itself.

Verena: That’s right! I forgot about that.

Verena: I forgot about this moment where we were trying to shoot in the harbor and making a documentary about the sea without seeing the sea.

Lucien: There were always different plans. We planned to do something about fishing, but maybe the spectators can’t tell that it has anything to do with fishing. We went out on boats in the middle of the Atlantic. Once we got out there, it was nothing like either of us had experienced before. It was so scary and cosmic and sensorially intense and physically grueling. You felt the incredible, repetitious power of humanity and industrialization. Simultaneously, we felt like an insignificant spec on this larger seascape where you could die tomorrow and nobody would even notice. We were so taken by this unfamiliar, exotic sensibility of what we experienced out there that we decided to stay only with the ocean and let go of any land-based references.

How concerned were you about bringing all of this camera equipment out to sea in such an unforgiving environment? Did you have a contingency plan if something were to go haywire?

Verena: I remember when we made our first trip out to sea because we didn’t know what to expect. We took a lot of equipment because we had made a deal with the captain that whatever happened, we wouldn’t be able to turn around and go back to land. We came to realize that it wouldn’t be ideal to film with large cameras and that the bad weather conditions might destroy them. We started taking smaller cameras that were more relevant to the conditions aboard the ship. We did continue to shoot with the bigger cameras, but it didn’t seem appropriate for what we were doing in most cases.

Lucien: One thing we really struggled with was the fact that fishing is one of the most over-filmed things in the world.

Verena: That’s why it was important to pin down our own aesthetic so it doesn’t resemble the kind of fishing footage that came before or repeat the imagery of fishermen that we’re used to seeing. We were very resistant to that. The smaller cameras were incredibly useful in approaching the shots differently. The images became more abstract and strange and nightmarish.

Lucien: But also more real and more evocative of what it was actually like to be there. It became less of a spectacle.

Verena: Those cameras captured the light in a very special way because of the brightness of the spotlights on the boats juxtaposed by the pitch darkness of being out at sea. It makes you lose your sense of time and place. The aesthetic became more aligned with our physical and emotional experience of being there.

Lucien: One thing that we did want to do after our previous films was to work in a more reciprocal way with our subjects, to breakdown the subject-filmmaker distinction. So after the first trip, we wanted to find a way to get closer to the ocean, the fish and the fishermen’s experience. We started using small, DSLRs that could attach to the fishermen’s bodies like on their heads, their wrists or their chests. And, of course, we built waterproof housings that we could be placed underwater. We were interested in capturing this immediate and corporeal subjectiveness; a portrait of fishing from the inside where the cameras will capture the physicality of what it’s like to be a fisherman. When the cameras were strapped to their bodies, they couldn’t think about filming. They were just working and the footage literally corresponded to every bodily movement that was made.

Verena: They have one of the most dangerous jobs in the world, so you can’t give them direction when they’re working. It’s actually a very repetitive job, but they have to be careful in order to stay alive. If you put your foot in the wrong place at the wrong time—

Lucien: A cable will take you overboard. We didn’t even tell them to do what they normally do.

Sound design is a very powerful element in the film. It truly heightens the violent nature of the ship itself. What was your overall approach?

Lucien: We were worried about that initially because the sound of the engine was so loud on the boat. We quickly learned it would be impossible to capture any dialogue. The fishermen don’t speak much anyway because the intensity of their labor is such that they have to work at a certain level of speed and coordination. They communicate with alacrity without speaking, but instead with movements and gestures. Also, we weren’t so invested in the dialogue because it seems like such an incredibly thin, attenuative representation of the magnitude of human existence and the world itself. We decided to embrace the harsh sounds aboard the ship like the roaring engine, the sea, the labor on deck, the machines, the cables—they’re all a part of the acoustic ecosystem. You hear the fishermen listening to heavy metal in the film because that helps drown out the noise, but they listen to other stuff too like country and folk music. In the case of this boat, the speakers on the deck were broken so the only music that you could hear was coming from the captain’s bridge up top. They had to crank up the music really loudly and that’s why it seems like they’re listening to AC/DC for 86 minutes. [Laughs]

Have you shown the finished film to the boat crew? What were their reactions?

Verena: They wanted to kill us. [Laughs] I’m just joking.

Lucien: They haven’t seen it in the cinema; they saw it on the boat with the engine running.

They will have a different cinematic experience watching it in a darkened theater with a proper stereo system.

Verena: We want to bring them, but they’re not often on land. Also, I don’t think they’re used to being around big crowds. They are creatures of the sea. They might spend maybe three or four days a month on land, which is not a lot. They have no say in when they can and cannot come back on land because it depends on how much fish they’re able to catch. The last time we saw them was in New Bedford when they were on the port and only the captain hadn’t seen the film. But the captain knows so much about the film already that it feels like he has seen it.

Lucien: From what we can gather, on one hand, the fishermen feel like they’re a marginalized community and, like any subculture, they feel victimized. They think that the media’s representation of them is to scapegoat them, so they’re worried about what filmgoers will think. On the other hand, they feel that this film does justice in showing the intensity of their lives and what they risk to be out at sea. This works as n investigative record, for their families even, and it really resonates.