From The Archives: Rupert Evans

The Man in the High Castle actor on the honesty of child actors, wearing comfortable shoes, and Ivan Kavanagh’s The Canal. 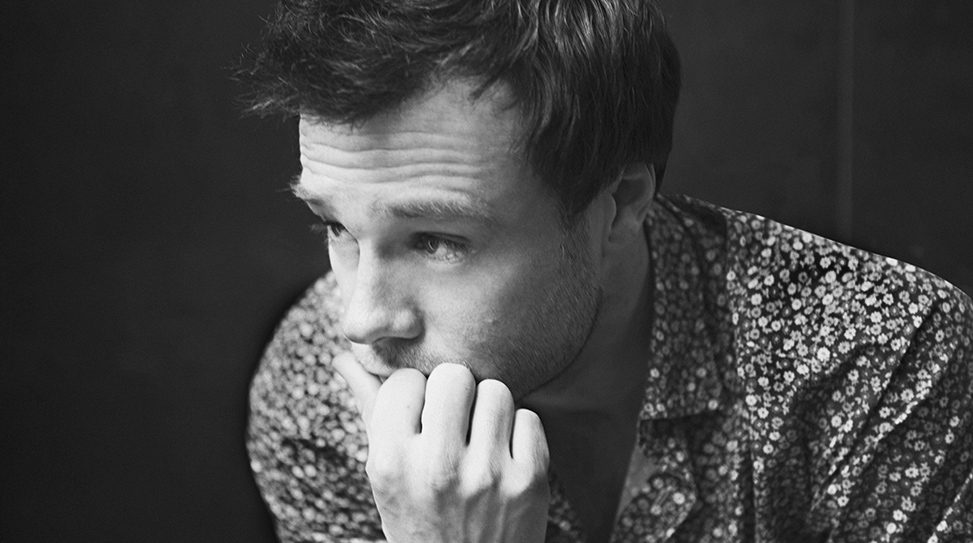 People think I’m a bit weird walking around the streets of Dublin talking to myself, but that’s what I do.

Ireland has been exporting tales of horror for more than a century now. Most notably, Bram Stoker’s Dracula was first published in 1897 and The Magician, one of the first-ever horror films, was directed by an Irishman. Ivan Kavanagh’s The Canal, the Emerald Isle’s latest spooky offering, quickly introduces us to David (Rupert Evans), a film archivist who has the misfortune of moving into a house where malicious turn-of-the-century murders took place. It’s when his wife goes missing that he begins to suspect an evil presence has taken up residence in his home, intent on shattering his life and threatening the safety of everyone around him. The ensemble cast is committed to Kavanagh’s vision here, but Evans stands out, gamely submitting to all kinds of physical and emotional extremes in a complex and constantly shifting role. Stateside audiences might recognize Evans from Guillermo del Toro’s Hellboy and Alejandro Amenábar’s Agora. Mostly known for his expansive TV work in the UK, the Brit recently appeared in two shows, The Village and Rouge.

You can next catch Evans in the horror flick, The Boy, opening January 22, 2016.

I stumbled on an early treatment of The Canal and your name was already attached to it, along with a brief bio. How did this project come to you?

I was filming something at the time when I got this script. What I loved about it—what I love as an actor primarily—was how the character is constantly changing on the journey that he’s on. Ivan and I had a Skype meeting, which is kind of becoming more and more normal now. We just talked about movies for an hour. We talked about the different movies we liked and The Canal, obviously. From there, we spent a lot of time talking about the relationships within the movie.

What questions did you have in terms of what would be expected of you?

When we arrived in Dublin, Hannah Hoekstra and I spent a lot of time talking about our characters’ backstory. We spent hours and hours improvising with Ivan, which I found really interesting. Ivan would set up a camera and conduct these “therapy” sessions, both Hannah and I individually and together. Ivan would ask us questions and we would talk in character about our lives. That gave us a real understanding about where we are in the relationship at the beginning of the film. We all have our public persona when we meet people and what we’re like behind closed doors. Although this is a horror movie in terms of genre, it’s very character-driven, which was very important to Ivan as it is to me. We wanted David to be this nice guy at the beginning of the film. We all have a dark side, don’t we? We all have the capacity to do bad things. Obviously, we should choose not to, but when you’re in extreme situations, it’s interesting to see what might trigger something else.

How demanding was this role in relation to others you’ve taken on?

It was exhausting. I was exhausted. [Laughs] I hadn’t really realized how exhausting this was going to be. It was probably the most physically and emotionally demanding job that I’ve ever done. My character is virtually in every scene and just considering the extremes of what happens to him. This is a bit of a spoiler, but he catches his wife cheating. It’s about how people deal with loss and betrayal. It was emotionally demanding, but that’s the appeal of the job as well. I think that’s what cinema is about: drama and conflict in extreme situations.

Is it a comfort to you knowing the entire trajectory of your character that a film allows whereas as you don’t necessarily have that on TV shows?

It’s quite interesting when you don’t know what’s going to happen when you start a job on television and they haven’t written the end yet. That has its benefits because, like in life, we don’t know what’s going to happen tomorrow. It can be useful because you’re just being in that moment without predicting what might happen. We obviously knew what would happen with this story, so we were careful, or at least I tried to be, about playing the scene in the moment. There’s a 5-year-old kid, Calum Heath, in this and 5 year olds don’t really act… They just are. It was great having him there. When you’re dealing with him, you’re just brought into the moment anyway.

Kids that young don’t have the ability to be false.

We all gain habits as actors and as adults. Kids scream and scream and scream, and never lose their voice. As we grow and become more socially aware about what’s right and what’s wrong, we gain habits to combat that. Kids don’t have any of that. They get bored and distracted very quickly. It’s interesting working with kids, but sometimes it’s a nightmare. [Laughs] It’s a real lesson because the scenes can go a different way. Calum would just walk out of the room in the middle of a scene. But he’s a really intelligent little kid and took direction well. It was important to form that father-son relationship in the film and I hope that comes across.

You also have practical concerns like how many hours a kid can work on a given day.

Yes, exactly. I think it’s a bit different in the States, but I think we could do 4 to 5 hours.

Are you good about acting opposite something that’s simply not there?

What’s crucial in this movie is the sound design. With all horror movies, the sound design and camera moves are important. Ivan is a huge film fanatic. He and I talked a lot about different movies like Don’t Look Now and the way they used the zoom on that—the still shots where the camera moves in and out to create tension. Since I’m reacting to no sounds during the shoot, and sometimes reacting to shadows that aren’t there, we had to spend a lot of time trying to gauge the right level of intensity and fear. But that’s all done under Ivan’s supervision. He’s editing the film in his head as we’re going along invariably. As an actor, with film anyway, you’re serving the director. You offer things and hope that they’ll then ask you to change things depending on how they feel about the situation. It was definitely tricky being scared and irrational all the time. David goes through a huge amount and keeping that level of intensity up every day for months on end was one of the battles and challenges. I took a good holiday after. [Laughs]

What about on set? Did you sort of keep to yourself when the cameras weren’t rolling?

You do quite a lot of that in the movie.

[Laughs] I like running at night. Invariably, I’m looking at the next day’s work, so I walk a lot as well. I find that really useful. People think I’m a bit weird walking around the streets of Dublin talking to myself, but that’s what I do. And sleep! We were waking up at half 4 or 5 in the morning. And comfortable shoes! This is my trusted belief: When you wear comfortable shoes, it makes everything easier.

Coming from a theater background, how did you find the experience being thrown into epic features like Hellboy and Agora?

It’s one of the privileges. On Agora, I spent months in Malta learning to ride a horse without a saddle. On Hellboy, we used CGI and other things. It’s really an amazing job in which to acquire certain skills. That’s one of the reasons why I love being an actor. I enjoy immersing myself. With The Canal, a very character-driven movie, it was interesting to really understand and get somewhere close to experiencing what it must be like dealing with death and betrayal in a life destroyed. The psychology of it was something I hadn’t really done as an actor before.

Have you had a chance to watch The Canal with an audience yet?

I just watched the movie last night for the first time and it was crazy! It was really good. I was a bit jet-lagged so I was a bit weird. [Laughs] Last night, the audience laughed a bit and they were scared, which was relieving. It’s a relief that the things you were hoping would work worked. It was really enjoyable to experience that with strangers in the dark. That’s what movies are all about.

Did that sort of bring you back to the stage? You’re obviously not performing up there real-time, but the reactions are immediate and visceral.

Yes, of course. Cinema and theater are one in the same, particularly with something like this. There are moments in the film that are very difficult to take. Visually, the film can be a bit harsh. There’s a lot of blood being poured. There are a lot of sadistic, tense moments. It’s all very theatrical.

Are you very superstitious yourself?

That’s really interesting! Am I superstitious? Um… I do believe there are otherworldly things out there. I can’t quite put my finger on it, however. I don’t know if that’s through fear, my own personal fear about not wanting to go there. I do think there are things left unexplained. I do believe there’s an energy, which we often attribute to people who have passed on. I do believe that.

Interesting characters, original stories, good writing, talented directors—these are obviously important things to consider. What do you look for in projects that’s maybe not so obvious?

Funnily enough, it’s often the simple stuff that’s best. This will sound cliché, but clichés are often truisms. Seeing a character go on a journey and change over time is interesting. I don’t know what I’ll do next, but it’s instinctual. You get excited and go with your gut, you know? Ultimately, you don’t know how a movie will look because you’re beholden to the director and the editor. I have no control over the outcome. All I have control over, really, is the process itself. The end result is important, but the journey is just as, if not more, important to me.