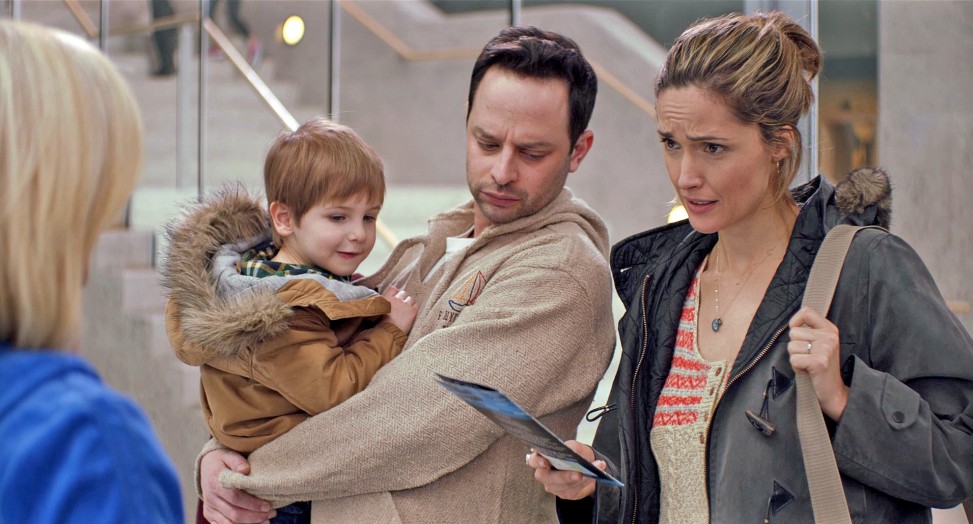 I don't think we feel like adults in the way that our parents were.

In Ross Katz’s Adult Beginners, a young, hipster entrepreneur (Nick Kroll) crashes and burns on the eve of his company’s big launch. With his entire life in disarray, he leaves Manhattan to move in with his estranged pregnant sister (Rose Byrne), brother-in-law (Bobby Cannavale) and three year-old nephew in the suburbs—only to become their manny. Faced with real responsibility, he may finally have to grow up—but not without some bad behavior first.

Rose, your name’s been coming up because you were involved with Tumbledown for three years and that premiered at Tribeca.

Rose Byrne: Yeah! I was. It’s a shame because it became a scheduling conflict. Oh man, I can’t remember what I was finishing at the time. I love Rebecca [Hall] though. I think she’s brilliant. Jason [Sudeikis] as well. Did you see the film?

I did. It was great. I mean, that film was in development for seven years or something like that. This stuff happens, right?

Rose: It does, unfortunately. George Clooney was supposed to play your role, Nick. [Laughs] What happened?

Nick Kroll: Well, he was very alpha and I just told him, no, I’m gonna do it. He was very kind and he said he might play the role of Justine.

Rose: He’s not ready for that.

Nick: No! Not yet… I like your sense of humor.

Nick, I think this is the first thing I’ve seen you in where there’s a lot of drama. Was that interesting to you?

Nick: It was fun to do something new. It was like exercising a new muscle. I would also sort of argue that it didn’t feel like a transition because, as crazy as some of my character stuff have been, I was always attempting to tell it from a dramatically, emotionally honest place. There’s a difference between playing a grounded character who has lost everything who moves in with his sister and a guy who’s a toilet baby with an infected liver.

Rose, do you think you’re anything like your character?

Rose: I’m the youngest of four, so honestly, I think I relate to the Jake character more. I think the eldest is always so innately responsible and it’s a big deal. I think there’s a lot of pressure to be that and this character had elements of that. I looked to my siblings to sort of understand the relationship you have with someone younger than you and how protective you are of them. My sisters have small kids and they’re juggling a million things like a lot of working mothers and fathers, so I really looked to them.

I think this is the kind of conversation that isn’t explored much in movies: the younger generation taking care of their parents. Who’s going to take care of our parents when they get sick?

Ross Katz: Oh, I think this will start the dialogue for the baby boomers medical care. We’ll be at the forefront of that. But I think so. The movie is called Adult Beginners and we are struggling with the trappings of adulthood. I don’t think we feel like adults in the way that our parents were. When my dad was my age, he had four kids and started a company. I can’t get an ink cartridge for my printer. [Laughs] I think we’re all struggling with that. That also goes into parental care and Rose’s character really takes the brunt of that. That is universal even for folks older than us.

Nick [Kroll], when you were conceptualizing this idea for the movie and when you brought it first to Mark [Duplass] and later to Ross and Rose, what did those first conversations look like?

Nick: It was, like, here’s the basic story about a guy who loses everything and moves in with his estranged sister. He has to take care of her kids at that point. That’s what I brought to Mark and he was very helpful in talking me through that. When we brought in Liz [Flahive] and Jeff Cox, who wrote the script, had themselves a young child. By the time we went into production, they had just given birth to their second child. We really had them give us insights into what it’s like to be young parents slightly overwhelmed and slightly under-slept. They brought so many amazing details to it. The scene with me, Rose and Bobby [Cannavale] at dinner where they’re shoveling food in their faces, that’s a detail that’s really specific to what young parents can identify with. You just let everyone into the creative process and have some kind of ownership over it. In specificity, you have universality. The beauty of having a sibling relationship story is that just about everybody can relate to it.

Rose: [Laughs] Well, I’ve lived in America for nearly ten years. I soaked it up. I soaked it up and soaked up the work.I guess I agree with Nick that, within the specificity to this story or universe—

Nick: So within this American film there’s an Australian film.

Rose: [Laughs] For me, Adult Beginners was so relatable and specific. Whereas when I did Neighbors, I didn’t understand college culture at all. I didn’t have kids or friends in college. I didn’t know what hazing was or all of that stuff. And I was playing an Australian in that, but it all seemed odd to me. The college culture is so specific to America and that didn’t translate to me at all.

Ross: I’ll say that working with Rose, her American accent is flawless. Oftentimes with Rose, you forget You’re taken aback off set because it’s so natural.

Rose: Your Spanish is excellent. Bobby is really good with Spanish.

Nick: But Ross is Cuban. I’m pretending to be Cuban.

Ross, how did this cast come together?

Alex: When I got the script, Rose and Bobby were already attached, which is a dream. With Nick and Ava Kaufman, who’s really extraordinary, we wanted every small role to matter because of the trajectory of these characters and who they’re running into and how it affects them. We really reached for the top and getting the possible people. Every day was a revolving door. Today is Joel McHale and next day is Josh Charles. Then we had Bobby Moynihan and Jane Krakowski. It was extraordinary to get these actors to come in and do a day of work two days.

Rose, it was refreshing to see you play somebody who’s not so precious about being pregnant because we’re not used to seeing that too.

Rose: Oh yeah, I know. It was refreshing. It was such a realistic representation of what goes on. I don’t think people are comfortable watching that.

While we’re on the subject of mothers, what do you do for Mother’s Day?

What did you really hang on to when you guys read this script for the first time?

Alex: For me, it was the combination of the comedy and the drama. I also have an older brother who I try really hard to connect with who’s more the Jake character and he’s more the caretaker. He lives in San Francisco. I thought a lot about siblings and how people have a busy life with kids. I related to it on that level.

Rose: I think it’s the extraordinary and the ordinary. I think these characters are funny because they’re flawed. They have that sense of humor.

Nick: This isn’t the goal of it. We’re not heroes and we’re not all villains.