From the Archives: Son of Saul

A look back at our conversation with director László Nemes and co-writer Clara Royer about—still—one of the best films of 2015. 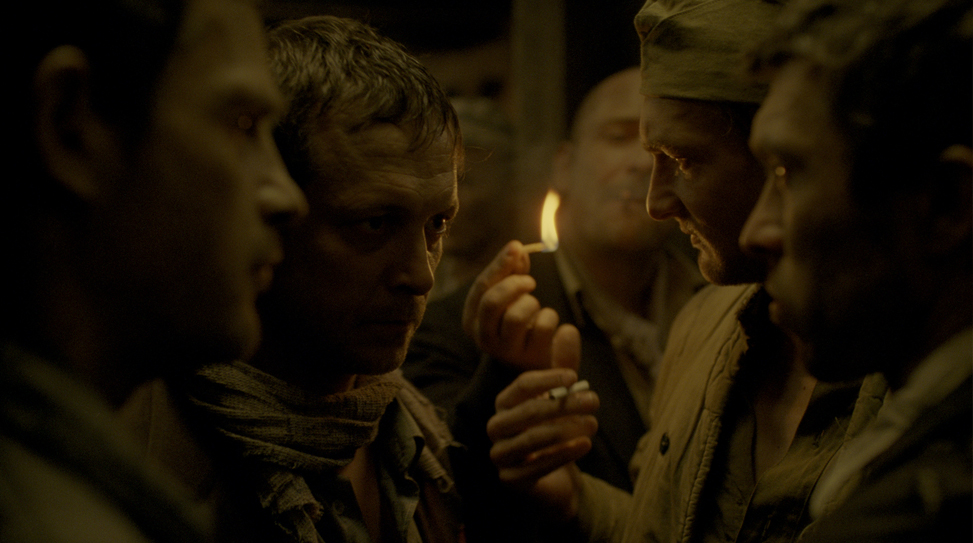 Our objective was not to limit, but open up to infinity the horror that we cannot represent through images alone.

A terrifyingly accomplished first feature for Hungarian writer-director László Nemes and his French co-writer Clara Royer, the 2015 Cannes competition entry Son of Saul is a harrowing portrait of Auschwitz in the latter days of WWII. It sticks to the limited vantage of a Jewish prisoner, immune to both hope and fear, hell-bent on finding a rabbi to carry out a young boy’s proper burial—to him an act of moral survival. The result is a grim, unyielding depiction of the Holocaust as has yet been made on that overworked subject in film. It’s a masterful exercise in narrative deprivation and sensory overload, recasting familiar horrors in daringly existential terms.

Nemes’ film centers on Saul Auslander (first-time actor Geza Gohrig in his own exceptional acting debut), a Hungarian Jewish man who works with a Sonderkommando unit at Auschwitz-Birkenau. Saul is no aimless wanderer, but rather a man on a mission, spurred into action when he chances upon the body of a young boy he takes for his son. It’s an unthinkably foolhardy objective, especially on the eve of a long-planned uprising (situating the film right around October 7, 1944) and it will require Saul to defy captors and collaborators alike, resorting to all manner of manipulation, blackmail, fast thinking and quick, decisive action. It’s truly powerful cinema.

Son of Saul open in select theaters on December 18.

[Editor’s Note: The following interview originally ran during Cannes on May 17, 2015.]

László, I almost didn’t recognize you. You look much younger than in your press shots.

László Nemes: [Laughs] No, I’m not that young. I just look very young. I’m my own father.

This is your first feature and you’re the sole first-time filmmaker in competition at Cannes. There’s a lot of mystery about you. How did this film come about?

László: We were tired of the usual representation of the Holocaust. We were just sick of it. We tried to design a story, a film, that doesn’t function the same way and we tried to break away from codes. The film was born out of the frustration and the need to talk about that. Then we came across the material and the Sonderkommando writings that sort of mapped out the inner thinkings of these workers. From that, we got the one-liner for the story out of the blue. This guy finds a body and there’s a moral dilemma: What is he supposed to do? That’s how the project started.

You’re going to end up talking a lot about your own familial history on this promo tour.

László: Of course. But it’s not like I had to legitimize my family dying in Auschwitz so I can talk about it. Yes, they died. It’s in the family, but that’s independent from the approach. It’s a question of point-of-view. How do you tell a story about being in the middle of hell? How much do you show? This isn’t history. People who show and tell too much are there to make a period film. It’s like, there was this and there was that. There was this truck. There were barbed wires and guards. You see everything. We wanted to make radical choices to move away from that.

László: Yes, it’s the here and the now. It’s about how you bring the story to the level of one person. Even when you’re in the camp, I figured that you wouldn’t see that much or know that much at all. You’re in the middle of it, but you have no idea where you are. You have a very narrow scope in terms of perspective. So how do you translate that into a cinematic experience? This guy doesn’t look at what he’s used to looking at because he’s around horror all the time. He’s so focused on his own quest and that’s all we wanted to show. You suggest much more by showing less.

In a way, Saul injects all of his trauma onto this young boy’s body.

Clara Royer: That’s to protect himself. You channel that through the boy.

László: I have a sense that, since we don’t show that much, the film uses the minds of viewers in a way that the horror can’t be perceived in its entirety otherwise. We create something bigger than any frontal image can clearly establish. We used fragments to do that. Our objective was not to limit, but open up to infinity the horror that we cannot represent through images alone.

You certainly accomplished that with the sound design. It’s true that what we imagine in our heads are far scarier than what we might see in fixed images.

László: The sound design constantly reminds us there’s more outside of the frame. It’s a constant reminder of that, absolutely. This world was much more than what we can show in a cinematic way with a camera. There’s a danger in simplifying things too much. I didn’t want to simplify it. You create something that cannot be grasped through layers and layers. That was important.

If you read the testimonies of the surviving Sonderkommandos, they talk about how they put walls around themselves and acted as robots.

László: But those were people that survived. There’s a difference there.

There were very few moments where I stepped outside of the film. But in those instances, I was marveling over the film’s technical precision. Things are extremely choreographed, and you somehow achieved that in a seemingly chaotic environment.

László: Did you meet Geza [Rohrig] yet?

Not yet. But he’s right there and I saw him lurking in the corner earlier.

László: He’s someone you can’t control. [Laughs] For choreography, I would say he’s 70% controllable. The remaining 30% is completely out of my hands. This is a really good ratio for the Sonderkommandos with marginal movements. I’m not saying this was improvised because it wasn’t, but Geza is hard to control. It was good that he played against my sense of control. The skeleton of it was very defined going into it: We knew where we would start and end. We wanted to make all the compositions for the backgrounds dynamic. So it’s a mixture of choreography and letting things play out the way it’s going to play out. The handheld camera gave us a lot of liberty.

Where in the world did you find this guy?

László: I knew him from New York when I was living there. I knew him as a Hungarian poet living in the U.S. We needed Hungarian actors to book for the film—not for the main role at the time—and we auditioned him. He started to reveal himself more and more like a main character. You could see that in his personality, focus, and depth. He had this roughness to him, but also a lot of intensive thinking. He’s very simple, instinctive, and all these things that are hard to define. We knew he was a free atom, in a sense. But my main concern was how to control him. He has the ability to exist, not trying to act. It’s funny because it was a conscious choice to let him breathe a little bit. I never really talked about him before, so I’m starting to think a lot about it now.

Clara, how did you and László become collaborators ?

Clara: We started working on this project in 2010, but I think he was thinking about this as early as 2007. László and I go way back. He used to be my Hungarian teacher in France.

Clara: He came to me with this one sentence that was the heart of the film and, of course I said, “Oh wow! I want to do it with you! Really!”

László: With no experience in screenwriting.

Clara: Not at all. We learned together. I learned a lot from László. I write other types of things and this has been a great lesson in humility. You have to be very humble when you write a script.

László: We learned that by working together and getting on each other’s nerves. [Laughs] I wrote the first draft, and Clara wrote the treatment and crafted all the scenes. Then I wrote the final draft.

László: Then I had to take a lot of things out because it was too expository.

Clara: You immerse yourself so much into the research, but then you can’t make this film about that stuff. We were always trying to take the low-key, undertone approach, which was also true for the dialogues. I remember when we killed tons and tons of lines. These guys are in hell. They wouldn’t speak in poetry or speak in an expository way. They barely knew each other’s names. They would say, “You!” Those are the kinds of details we found in the historical research.

László: We had to figure out what kind of rules this world had. We didn’t want to establish anything in a traditional way because that wasn’t the logic of the film. The screenwriting cannot be separated from the directing in any way. We never envisioned this as a classical period drama.

I have yet to read an article at the festival about your film where Bela Tarr isn’t mentioned.

László: There’s no relationship there at all. People can’t accept that I just fell from the sky. [Laughs] I really fell from the sky! Bela was sort of my initiation into the trade. He was my introduction into directing and taught me how to approach a scene in certain ways. But, unlike Bela, who makes beautiful films, we knew we couldn’t make a beautiful film. That was rule number one: We couldn’t have traditional aesthetics. I haven’t talked to Bela in eight years.

Well, that’s the funny thing about press releases. They really take it upon themselves to present new artists their way. You need to be contextualized somehow.

Everyone will have their opinions about the movie, both good and bad. We’re not even halfway through the festival, but I would be very happy to see your film win the Palme d’Or.

László: Thank you very much. That’s a great compliment. But I really haven’t had enough time since the premiere to process this. I haven’t talked to a lot of people, really. But that will come.