The Brazilian director and the Danish actor on the Cannes Film Festival, the casting process, and their tale of self-rescue Arctic. 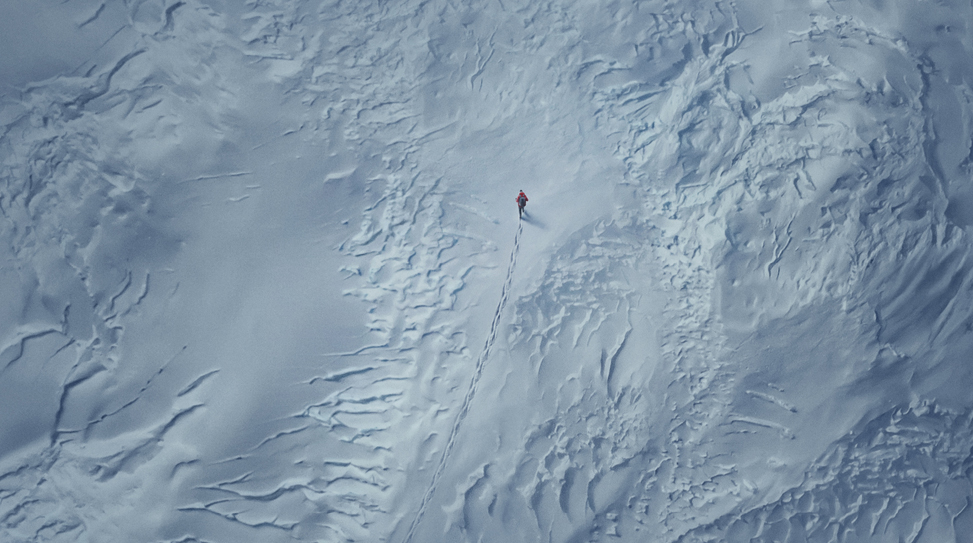 Nobody turns down Bond. I was asked to play the main villain and, to be frank, I thought that would not only be funny but pretty good to rub in the faces of my fellow Danish actors.

Joe Penna’s snowbound endurance thriller Arctic, which premiered in the Midnight strand at last year’s Cannes Film Festival, towers over other lone survivor sagas. A nearly wordless film wherein our hero—a blank slate and an avatar for mankind—takes sensible precautions at every turn, it’s uncommonly competent. There are no cut corners or only-in-the-movies gambits. You could also say that Arctic is about the triumph of the human spirit like so many others before it, but that would be faintly absurd as it never strives for that kind of pretension. This is an unromantic rendering of a man who keeps going.

Arctic has a single, linear narrative—one of the purest distillations of the centuries-old, man-versus-nature struggle dating back to Daniel Defoe’s seminal 1719 novel Robinson Crusoe. It’s clear when we first encounter Mads Mikkelsen’s pilot—whose name Overgård appears only in the credits and is pretty much the only thing we ever learn about him—that he won’t be doing barrel rolls anytime soon. His plane has crash-landed, stranding him somewhere north of the 66th parallel. There’s a piece of paper on which he ticks off the days, indicating that he’s been on his own for about two months. Overgård has made the best of his situation, countering his ordeal with a quotidian routine: an endless hunt for trout beneath the ice, sending out distress calls by means of a wind-up transmitter, tending to the enormous SOS sign he etched into the basalt, and retiring to the shell of his busted fuselage in the frozen wilderness. There are just a few wrinkles on the horizon, notably a polar bear wandering around in the distance. When he pulls off his footwear, only eight frostbitten toes remain. And then he’s shaken out of this pattern by what should be his salvation: a search-and-rescue helicopter appears in the distance, fighting the same icy wind that his plane presumably did. The chopper goes down, leaving behind its co-pilot (Maria Thelma Smáradóttir) clinging to life. Fading, she will remain throughout the entire film in a state of mute semi-consciousness. Now tobogganing his living cargo across the tundra, Overgård journeys north towards—if his map is correct—the nearest outpost. It’s a march towards a certain oblivion.

Arctic is essential viewing for the Mikkelsen connoisseur. Next up for the Danish star is Doug Limon’s Chaos Walking, due in 2020, about “a dystopian world where there are no women and all living creatures can hear each others’ thoughts in a stream of images, words, and sounds called Noise,” also starring Tom Holland and Daisy Ridley.

Arctic being his debut feature, it’s a compliment to Penna—formerly a popular YouTube content creator—that you’d never guess he was anything but a seasoned veteran. Next up for the Brazilian filmmaker is Stowaway, also due in 2020, about an interloper on a mission to Mars who sets off a series of unintended consequences, starring Anna Kendrick and Toni Collette.

Mads—you’re not gonna remember this, but I approached you in this totally cinematic moment on the Croisette at Cannes in 2016. It was super early in the morning and I saw you crossing the street to light up a cigarette. The sun was just breaking between the clouds. You were on the jury that year.

Mads Mikkelson: Oh yeah, of course! Great to hear from you again!

Did being on the Cannes jury teach you anything new about making movies?

Mads: No, I don’t think so. I don’t view moviemaking any differently because of the jury. I think I might view the awards system differently after being on the jury. [Laughs] It’s interesting to see how passionate people can be for something and also anti-passionate for other things—your opinions can be the exact opposite of the other guy. There’s a lot of passion involved. It’s rarely a unanimous decision, right? They’re very passionate about what they want. It can be very, very different from what they like.

How do you choose roles nowadays? Is it very different from before?

Mads: It’s still the same thing. It has to catch my eyes when I read it. It has to catch my heart somehow, or my mind. Something has to catch me, and if it does, that’s easy. But if there are other parts of it that I don’t really get, I’ll definitely have a meeting or two with the person directing it and we’ll take it from there. I loved everything about Arctic. Then I talked to Joe and I loved everything he said about what he wanted to do with this story. It was a very, very easy choice.

What drew you to a project like Casino Royale, for instance?

Mads: It was a Bond film. [Laughs] Nobody turns down Bond. I was asked to play the main villain and, to be frank, I thought that would not only be funny but pretty good to rub in the faces of my fellow Danish actors.

You must’ve frozen your asses off shooting Arctic.

Mads: Oh my gosh, it was extremely cold.

Joe Penna: The cold gets you, but the worst part of it is the wind. It gets snow all over your face. It’s extremely difficult to shoot because the snow keeps getting into your camera. But it forces you to shoot things very efficiently because all you want to do is get back inside. It ends up helping you in the end. So you hate it at the time, but it’s okay—you’re fighting for your feature film.

Joe—where are you now with Stowaway?

She’s incredible. She should be getting more recognition this awards season for Hereditary.

Joe: She’s a really wonderful person. I talked to her at length about Stowaway and she was so passionate about it that we just gave her an offer on the spot.

Joe: It’s a matter of figuring out who you think might be good for that role, speaking to their representation and seeing, “Are they looking for something like this?” Then you send them the script and have a phone call or a Skype call with them. They have their thoughts about it. They’ll have questions like, “How do you want to shoot this? How do you want to shoot that?” or whatever it is. With Anna [Kendrick], we sat down for lunch for about two hours or so talking about films. Toni was in Australia so I gave her a phone call. So it’s just a matter of having a conversation about what you want to be doing and confirming that their goals are the same as your goals, and that you’re going to work well together.

You just feel each other out, ultimately.

Joe: Yeah. You know—you kind of ask incisive questions. Mads asked me how I wanted to shoot certain things, and because we were on Skype, I was able to share my screen with him. I showed him storyboards and videos of how the helicopter crash would work, for instance. We’re not making a Hollywood-style thing where the helicopter blows up for entertainment value. We’re really doing something different, like where you see a car crash from faraway. Hopefully, you’re on the same page and we move on from there.

You’re never taking that call trying to confirm or disprove something about your future collaborator?

Mads: I don’t have a test that I run directors through. I dive right into the story. I might ask some questions about stuff I don’t get or stuff that I think I get that I want to reassure myself about. Once you get into a dialogue, you can easily feel what kind of conversation it will be like to work together. You talk about it together and communicate. We don’t have to agree, but can we communicate? The moment we do that, the more things we have to rely on—it’s a gut feeling. I still think that gut feeling is by far the biggest instrument in film, at least in my world.

So what did you find most challenging on Arctic?

Mads: To nail what we set out to nail! [Laughs] The obstacles are obvious: the weather, me being alone, it’s super cold, and the wind. A lot of those things are obstacles, but the biggest challenge always is trying to nail what you set out to do. What do you call it? With the lack of being humble, I think we did that.

You got what you wanted.