The newcomer on her entry into film, the perils of Hollywood, and her starring role in the body-snatchers psychodrama Starry Eyes. 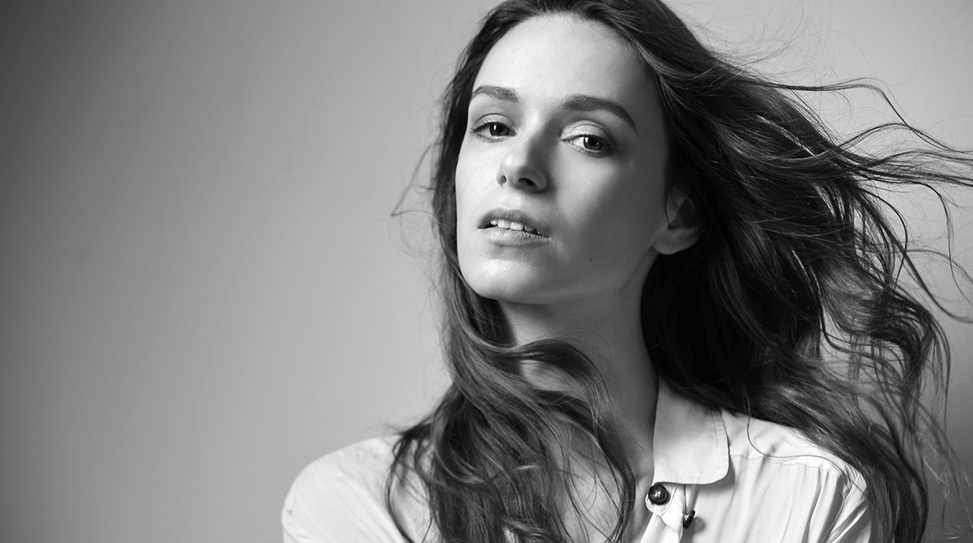 Since its very inception, there have always been those people who dangle the carrot and abuse their power in the industry.

Kevin Kolsch and Dennis Widmyer’s Starry Eyes is a visceral, insightful and provocative cautionary tale about the price of fame and sacrificing your identity in the name of ambition. The film cleverly asks, are you willing to sell your soul to sell out?

When we first meet aspiring actress Sarah (Alex Essoe), she’s working a menial job as a scantily clad waitress at a potato joint with Hooters aspirations. When she lands an audition for a leading role in The Silver Scream for the prestigious, yet long-dormant and insidious Astraeus Pictures, she wants the part so badly that it consumes her. And like so many actors hustling to get noticed, Sarah reluctantly agrees that, yes, she would do anything for a “gateway part” in a film, despite her accurate suspicion that something’s amiss. When she makes that misguided choice, Starry Eyes lays bare its black heart as the screenplay sends our protagonist into severe physical and emotional decline. Starting with an assault on her boss and a falling out with her kind-hearted roommate, her downward spiral continues with radical hair loss and worrying facial scars that give her the appearance of the most badly strung-out junkie. Her condition gets much worse from there and the depth of insanity that unfolds is not so plain. The film has a lot to say about the darkness inherent in us all, shown best by what Sarah is willing to unleash in order to chase her dreams.

You might not yet be familiar with newcomer, Essoe, who carries the film on her shoulders with one of the ballsiest performances we’ve seen in recent memory. In a first starring role, who could possibly question talent of this magnitude? The silence is deafening.

Starry Eyes opens in select theaters, and will be available on iTunes and VOD, on November 14.

Not much has been written about you yet, which is exciting for me personally.

You have the inside track. [Laughs]

So how did you get your start? Is it something you went to school for?

Well, my mother was a stage actress for a very long time. I grew up going to the theater with her. I watched the rehearsals and productions. I watched her on stage and her directing. And, of course, I’m totally obsessed with movies. I’m very much a self-identified cinephile and that has always been such a huge part of my life. But I originally wanted to be a teacher—or a mermaid.

Exactly. [Laughs] In high school, I took some drama classes and played the lead in Medea. It was fun, but I was super green and 17. Then I modeled for a couple years because I wasn’t really sure what I wanted to do. I wanted to travel, find myself and just take the time. Then I found this amazing acting workshop in Toronto with this teacher and it was totally transformative. I quit everything I was doing. I quit my modeling job. I quit my boyfriend. I just dropped everything and moved to Vancouver for this acting school where I trained for three years. And I’ve been to a lot of different places, but now I’m at a school that I really love in L.A. I’m training there now.

You were born in Saudi Arabia. Where did you actually grow up?

I grew up in Saudi Arabia! We moved to Toronto just before my 12th birthday.

Oh, I see. And with Starry Eyes, did you go through a traditional auditioning process?

I did, actually. It wasn’t nearly as exciting as the process you see in the movie. [Laughs] I got an audition and a couple months later I got a callback, and a couple months after that, I met with Dennis [Widmyer] for coffee. We just had a really great meeting of the minds. We talked about film for an hour. But he still wouldn’t give it up! He still didn’t cave in. He still made me wait after that. That was very crude of him I thought. [Laughs] And the rest is history.

What was your first reading of the script like? What were your gut feelings about it?

Sarah just leaped off the page when I read it. I felt like I knew her instantly and instinctively. There were so many things that I shared with her, especially as an actor having similar struggles. There was also this element to her that was very unhinged and very lonely. I just totally fell in love with her and felt so protective of her. It was so important to me to honor her properly.

Sarah’s heartbreaking desperation is real. She is struggling to get her foot in the door. Did playing out a struggling actor’s life like that feel strange to you?

It was actually very liberating! It was really nice to be able to represent what I do in such an honest light. Obviously, it’s all very supernatural and sensationalized, but at the same time, it’s very realistic—the rejection and how people can be very dismissive with you. But you also have the elation of getting the call, finding out that you booked something or someone liked your work.

On the surface, the film does look outlandish and totally over the top, but there’s a lot of truth in it. Everything that you see is the truth magnified in a cinematic way.

The directors were really great about that. They’re not actors so they don’t have a first-hand experience of what it’s like, but they were very accommodating with what I or any of the other actors brought to their roles, based on the realities of our own experiences. I loved how devoted they were to depicting the industry and the struggle of the actors in such a realistic way. There are so many misconceptions about acting, what actors do and what’s required of them. People can be very dismissive about it, like, it doesn’t take much effort at all. I wish it was that simple.

I can still recall the story with Naomi Watts. She told some reporter that Mulholland Drive saved her from committing suicide. She was just done at that point. She saw her limits.

Oh, totally. It’s a constant struggle: “Is this what I really want? Is it worth all of this crap?” It’s not easy, especially in the beginning when it doesn’t pay any dividends and you don’t feel validated. You feel like you’re just spinning your wheel and, honestly, sometimes you are. But it’s all part of the process. I once heard someone say, “A lot of people quit before the magic happens.” They hold on as long as they can, but then it’s like, “I can’t do this anymore. I’ll go become a veterinarian. A paralegal or whatever.” But I think if you’re really committed, passionate, take your work seriously and act professionally, people will at some point recognize that in whatever manifestation it comes in. Naomi Watts is so brilliant. For all of her self-doubt, I really believe that it was only a matter of time before someone recognized how thoroughly talented she is.

I couldn’t help but Google “Satanism in Hollywood” after watching this film. There’s obviously a lot of the Illuminati stuff out there, too.

I’m sure we had conversations about the Babylon that is Hollywood on this movie. Actually, Dennis and I both own a copy of Hollywood Babylon. [Laughs] Since its very inception, there have always been those people who dangle the carrot and abuse their power in the industry, exploiting hopeful actors. And one thing that I love about this movie is that it depicts just how easy it is to exploit artists and actors when they’re so devoted and love what they do. And we don’t like to admit it, but a lot of us would do these things for free. A lot of people are fine with doing that.

Have you heard any casting couch stories yourself?

There’s no one that I’m close to or anyone I’ve met who has encountered that. I did hear a story once about this one actor who was up for a big role in the 70s. The producer basically invited him up to his mansion in the hills. When the actor walked in, the producer straight up said, “Here’s the contact. All you have to do is…” You know what I’m saying. And the actor was like, “No, thank you” and left. I don’t know that it happens anymore. I think a lot of people find that distasteful.

That sounds insane considering what you guys were able to accomplish.

But we shot every single day, 12 hours a day. I think I got two days off, so it was 21 days. I literally had no breaks in-between takes or scenes. I would run to crafty, grab a granola bar and run back, which was fine. It’s always nice to have the momentum going. It was pretty intense!

Speaking of granola bars, the mealworm scene… You put that in your mouth for real.

That was really rough. It was totally disgusting. I thought I was being such a badass for volunteering to do that.

What about wearing the bald cap? You look amazing bald, by the way.

Thank you! [Laughs] Hey, I might pull a “Natalie Portman” at some point. On some days, I was in the make-up chair for five hours. Our make-up team was amazing. Hugo [Villasenor] was heading it and he’s the greatest. He really is a magician. There’s nothing he can’t do. He took amazing care of me through the bald cap, the wig, the contacts and the prosthetics. There was all kinds of stuff. No, it was super fun to do. It’s always interesting to see yourself in different guises.

Your next film is called The Divine Order?

It is, but I’d say it’s more of a thriller. Oddly enough, I’m the comic relief in it more than anything else, which was so fun to play. It’s about a cult, a Heaven’s Gate “drinking the Kool-Aid” kind of cult. It’s about these two people who become indoctrinated before they decide at the last minute they don’t want to go through with the “final transformation”. So it’s about their struggle to escape. I play the drugged-out nurse who wanders through scenes in a Vicodin haze.