Not one to lose momentum, the Cannes Grand Jury Prize-winning filmmaker returns with her sophomore feature, The Wonders. 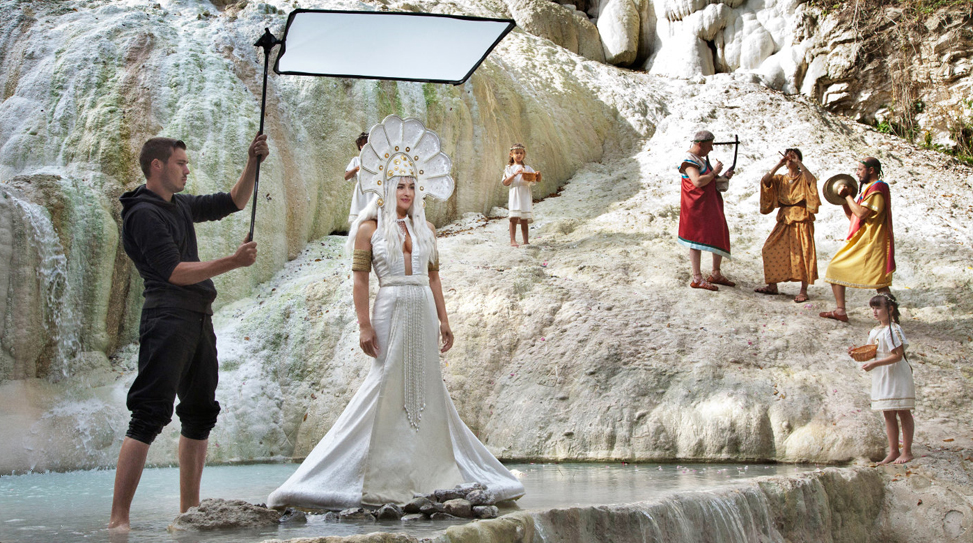 We grew up in total absence of cinema. The area where we grew up, there were no movie theaters.

Italian filmmaker Alice Rohrwacher is back with a follow-up to her 2011 debut, Corpo Celeste, proving that it was no flash in the pan. Rohrwacher’s Cannes Grand Jury Prize-winning sophomore effort, The Wonders, is a gentle and textured coming-of-age tale borrowed from the writer-director’s own upbringing in a multicultural family with their own beekeeping business on the countryside between Umbria, Lazio, and Tuscany. The film tracks the disappearance of the traditional rural lifestyle in Italy via a German-Italian family of beekeepers, and particularly 12-year-old Gelsomina (Maria Alexandra Lungu), the eldest of four sisters made to deal with responsibilities far beyond her years and looking to bust out of her pastoral horizons.

Wolfgang (Sam Louwyck), his wife Angelica (Alba Rohrwacher), their four daughters and an unexplained member of the entourage, Cocò (Sabine Timoteo), are refugees from contemporary urban life who have turned their backs on the system, instead farming and condemning the industrialization of agriculture. So when Wolfgang and his crew stumble on the filming of a competition advert in search of the area’s “most traditional family,” he’s repellent to the objectification, while Gelsomina is thunderstruck by its glamorous hostess, Milly Catena (Monica Bellucci). Wolfgang refuses to sell out like that, even as the family’s financial ruins lead to frayed nerves. When Gelsomina’s secret application gets accepted, their lives go into a tailspin.

The Wonders opens in select theaters on October 30.

You decided to tell another coming-of-age story centering on an adolescent girl as you did with Corpo Celeste. How did this narrative come about?

I always start my films with a question. This time around, the first question I asked had to do with the future of land, and more specifically, the sense of it being this agrarian workplace. From there, slowly but surely, the story of Gelsomina emerged.

I understand that you didn’t intend for this story to be autobiographical, although there are definite parallels. What are the things that you closely identify with?

You’re right, the film isn’t autobiographical. I get this question often and I think it’s because they focus so much on where I come from, and I am from a mixed family myself. The only real coincidence you’ll find is just that. I certainly know about beekeeping, but I’m not a beekeeper myself. I always wonder, from my perspective as a filmmaker, why people ask me that question so much. I truly believe that it’s something they have to discover for themselves. I think the question comes up because they don’t quite understand why I made the film. This question you’re asking, in fact, raises a lot of questions in me. My reasons for making the film were completely different.

So what were they?

I can’t do all the work here! [Laughs] I made the movie. You have to find the reasons. I can’t do everything myself. I think what really matters when you make a film is that you assume the responsibility of your own point of view, not that of the characters or the story. It’s only by being very specific that it can be very universal.

I’m no mind reader. The thing is, anything I say would be based on assumptions. I want to know your intentions. There is intent behind everything.

I do always start with a question like I was saying. The question leads into doing a lot of research on this very specific world.

I read in one of your previous interviews that you cull images during the early stages of writing. Do these images serve as a general source of inspiration for the narrative or are you trying to create an overarching visual style for the film?

I really don’t know what was said in previous interviews because there have been a lot of them for this film and then things change. [Laughs] I’m just joking. When I collect images of paintings, drawings and photographs, it gives me an outline for the characters and the landscapes. After I consume them, I forget it all.

Do you share those images with your team to create a visual palette?

We do put together some images to get a sense of the style or something that we can recognize. It’s sort of in the spirit of dogs that are used to detect drugs at airports. We don’t really know what we’re after, but we will know when it happens. It’s certainly an analytical process, but very instinctive as well. It could be a color. It might be a certain picture that captures a mood. It might be the look in someone’s eyes. We will know what is right when we see it. For example, with Maria [Alexandra Lungu], she seems entirely unique, but there’s also something very familiar about her. We saw many, many girls for that role, but as soon as we saw Maria, we recognized her.

Looking at the cast, it feels like you went out of your way to make it more complicated. You brought on non-professional youngsters, a lead actor with a mostly dance background, animals, a hoard of bees, Monica Bellucci and your sister.

What’s very fundamental in how I work is that creativity stems from a mixture of things, a hybrid of things. I would never make a film with just professional actors, or a film with all non-professional actors. I think what we need to do is move towards “the other.” Whenever I find myself before “the other,” I have to come out of myself and take a step forward. In order to make a film where we all sort of live together, we have to lose our vices and emerge from this category to which we think we belong. The actor has to stop playing the actor. Children have to stop behaving like children. A star has to stop being a star. We have to make that leap toward “the other.”

You seem to have a creative order inside of you that just works. Are you open to discussing the bigger challenges you faced that came unexpectedly?

Just to clarify something first, I think we often think about difficulty as being something bad. Instead, I think difficulty is an amazing thing. Difficulty is something that I experience with joy because it nourishes us. It involves a lot of sweat, but also a lot of happiness. It’s something we need. When you ask me that question, I wonder if you mean difficult in the sense that it’s something bad or something beautiful. If you’re asking about something that’s beautiful-difficulty, then I’d want to talk about the difficulty of keeping together this band of a varied people consisting of circus animals, children, actors who can be very demanding, and farmers. Keeping such a diverse group together is just a crazy enterprise—like my life. If you’re talking about bad-difficulty, then I’d say it’s whenever I have to explain something in words instead of images.

I very much like how you chose to word that response.

If something didn’t work, it didn’t work deliberately. Everything was predetermined. So the big surprise was that everything that happened was meant to happen that way.

Only two features in and you’re already a festival triumph story. How do the awards, the exposure, and the accolades inform your subsequent work, if at all?

The thing is that I love cinema so much and these things don’t seem to change me at all. I don’t think it will ever influence what I do. What’s strangely consistent is this desire and drive in me to explain things that I can’t describe with words. I want to move forward this way, in a clear and simple way. I’m working on a new film right now, but it’s too early to talk about.

Did you and Alba [Rohrwacher] discover cinema together growing up?

We grew up in total absence of cinema. The area where we grew up, there were no movie theaters. No one from our family was from the cinema world, so we weren’t educated in cinema at all. I think you can sort of compare it to a literary person who discovers poetry for the first time. They become so deeply moved and surprised by it, and want to spend the rest of their life getting close to it. I still don’t know what I want to be when I grow up! [Laughs] You know, I don’t think we always have to explain death in terms of death or life in terms of life. Your influence in cinema can come from different worlds. It can come from the realm of general human existence. There were certainly films that spoke to me and I had many “teachers.” Someone like [Francesco] Bertolini and [Jean-Luc] Godard showed me that the medium can be very free in the way you make films. The first film I saw was an American one called Look Who’s Talking?, and I love it!