The Russian wunkerkind on the tautology of existence, Alexander Sokurov’s towering influence, and the exquisite Beanpole. 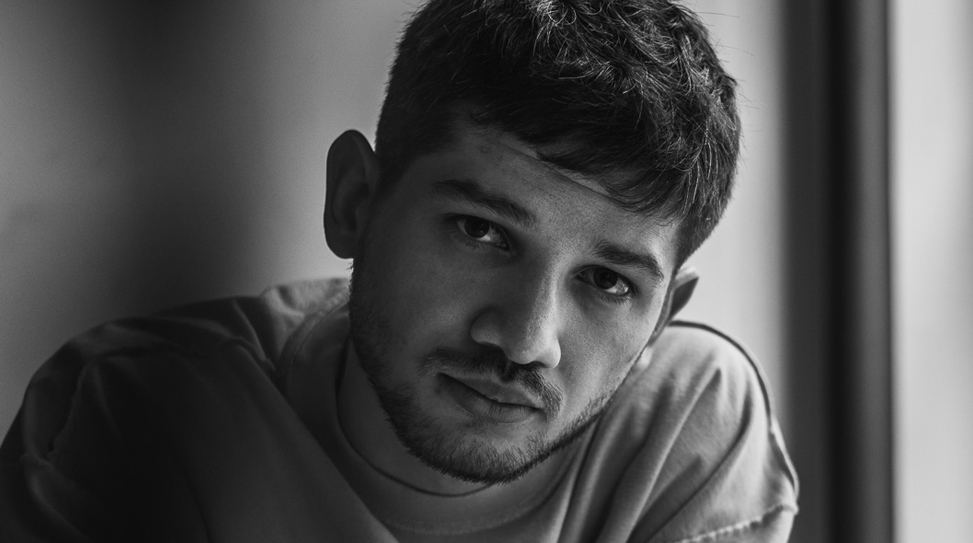 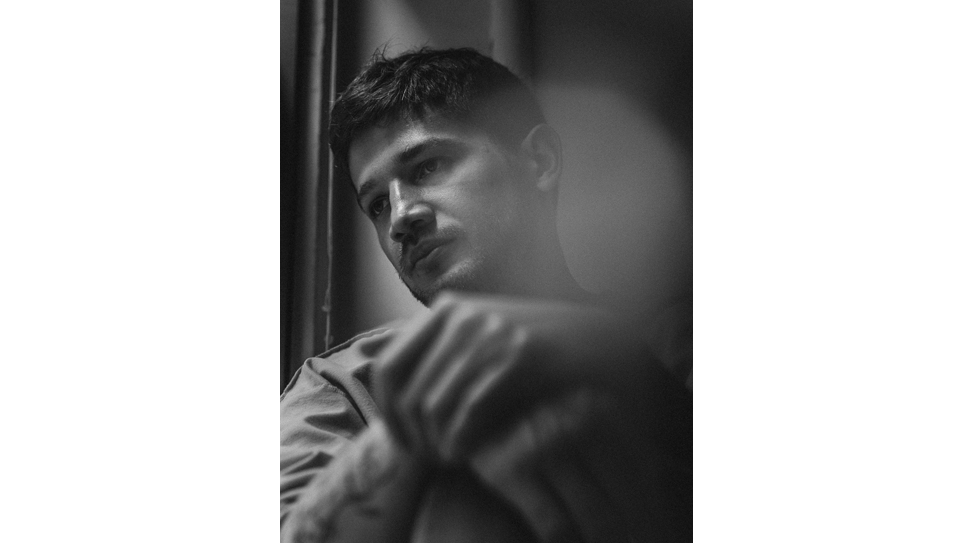 The most important thing [Alexander Sokurov] taught me is that cinema is not entertainment. It’s the method of reflection.

Inspired by Nobel Laureate Svetlana Alexievich’s book The Unwomanly Face of War—an oral history of the women who fought for Russia during the Second World War—Kantemir Balagov’s lacerating and exquisite second feature Beanpole is a film about the psychological toll of war.

It’s Leningrad 1945. The war is over, but the devastation is not, and two young women exist on the edge of a blade. In a hospital ward, Iya (Viktoria Miroshnichenko)—whose lanky frame earns her the titular nickname—is a nurse treating wounded Red Army soldiers. As the movie opens, Iya has a seizure, sending her into a fit of walking catatonia. It’s a recurring condition the film implies is the result of concussive injury in combat. Given her condition, she’s an unpredictable wildcard to everyone around her, including a young boy, Pashka (Timofey Glazof), who it initially appears to be her son. It doesn’t take long for these “freezing fits” to tilt Iya’s life into further tragedy: she smothers the boy after seizing up on top of him while roughhousing—detonating the film’s central trauma. It turns out Pashka’s mother is actually a fellow nurse, Masha (Vasilisa Perelygina), whom Iya befriended while they served together on the front. Masha didn’t escape the war entirely intact either, suffering a wound from shrapnel. So she can no longer bare children, although she desperately wants another. Masha begins to hatch a plan to get another child—a cruel scheme which involves manipulating and dominating Iya into doing her bidding.

Beanpole is a powerful portrait of mutual need. The women lean on and exploit each other in a milieu where class is still a destiny, in a city still ravaged by one of the longest and harshest sieges in the history of warfare. Both women have damaged psyches, damaged bodies—the extent of which we grow to discover, but never to fully comprehend. Balagov explores the ways in which the war fundamentally destabilized Russia’s national character through the experiences of these two lost souls: nurses with bodies irreversibly broken and tasked with healing others.

Two years ago, Balagov presented his feature debut, Tesnota—detailing a heinous kidnapping in late ‘90s Nalchik, where he’s from—in the Un Certain Regard sidebar at the Cannes Film Festival and picked up the FIPRESCI prize. The Russian filmmaker, a disciple of the legendary Alexander Sokurov, returned to the festival’s same program this year and deservedly picked up the Best Director prize. Oftentimes, Cannes’ Un Certain Regard program is a place for emerging talent—a kind of farm league for tomorrow’s great filmmakers who might eventually move up to the majors—but some filmmakers realize their potential quicker. Beanpole confirms Balagov’s stature as a major talent. At 28, he’s also part of a generation of Russian filmmakers who have lived their entire lives after the fall of the Soviet Union, making his choice of setting especially provocative.

The two women at the center of Beanpole, Iya and Masha, have a very particular bond. Their co-dependency reaches far beyond friendship or romantic entanglement. You could say it’s a matter of life and death. There’s a striking line in the movie when Iya says, “I need to be her master again.” It’s chilling. I think that’s the first and only time that Iya voices her need to possess Masha. The desperation is there. How would you describe their relationship?

Their relationship has no borders. You can describe it the way you want to describe it—this is the most important thing for me. I truly believe that in cinema you have the freedom to find your own meaning. This freedom to find meaning allows you to create your own interpretation. Your understanding of the film is informed by your own experiences. That’s what cinema is. For me, Iya and Masha are like one person: they need each other, they feed each other. That complexity came from literature. I can’t describe it in one word. I truly think that I shouldn’t do that anyway because, as I said, I want you to feel their relationship, and maybe your understanding of their relationship will be much richer than mine.

Yes. He told us, his students, to read more books and watch less movies. With movies, it’s someone’s point of view. Literature helps you to live someone else’s life or feel someone else’s experience through your own imagination.

Your producer, Alexander Rodnyansky, had this to say about you: “Kantemir belongs to a different generation—very different from my generation with a Soviet background. My generation is quite psychologically limited. Kantemir doesn’t have those kinds of limits. He’s able to fight any stereotype or repression he’s faced with.” What stereotypes and repressions do you think he was referring to?

You’d have to ask him. [laughs] I’m not sure what exact stereotypes he was talking about. But it’s kind of him to say that. Maybe he was referring to us, the collective students of Sokurov, because we’re far removed from commercial movies. Cinema for us is like visual code, meaning, I try to put words into the visual code and avoid using too many words themselves. I try to interpret through the visuals alone. Maybe what Alexander said has to do with the Second World War.

I assumed he was referring to modernity, taboos, and a certain boldness that youths today can more freely project, especially in Russia. Let’s talk about Nalchik, where you’re from. Tesnota was set there—opening a window to a place that we haven’t really seen at all in cinema before. How much do you think your background growing up in that region influenced your filmmaking voice now venturing into Beanpole?

You made a 10-part web series before enrolling in Sokurov’s filmmaking workshop. You’ve described that work as “very Tarantino.” You’ve since deleted all traces of that early work.

[laughs] You won’t find it.

This is a very revealing quote from you: “Without Alexander Sokurov, I would’ve definitely stayed an uncultured person.” In 2010, Sokurov opened his workshop in Nalchik because he was supposedly unhappy that Russia had backwater regions that fell behind culturally. This obviously had a huge impact on your life. How different do you think your trajectory would’ve been without his presence?

I don’t think I would’ve become a filmmaker if I hadn’t gone to his studio. I think I would’ve quit in the middle, which is what happened with photography. Before and after Sokurov, I’m a totally different human being. The most important thing he taught me is that cinema is not entertainment. It’s the method of reflection.

You’ve said before that “trauma is vital in film.” Trauma creates conflict in storytelling and it’s so obviously crucial. The boy dies in Beanpole and that’s the basis of everything that life throws at Iya and Masha from there on. How important is it that filmmakers experienced trauma in their own lives?

I think it’s really important, but it doesn’t necessarily mean that you have to have lived through the personal trauma depicted on screen. The personal trauma could be historical—the trauma of a nation. The most important thing for the filmmaker is to understand, to reflect on, and to become impassioned by that. I think of personal trauma as specific to certain events that happened in the region where I’m living: the terrorist attack on Beslan [referred to as the Beslan school hostage crisis], the terrorist attack on Nalchik, and the Chechen War. That’s what affected me.

We don’t see a single image of Stalin, Lenin, or any other traditional communist symbols of the time in Beanpole. That was intentional on your part. Was that because you wanted the film to feel timeless or because you didn’t want to distract from the central conceit?

Both! But there’s a third reason. For me, cinema is tied to mortality, and I think these characters, Iya and Masha, don’t deserve mortality. That’s why I didn’t include those things in my film.

You originally thought about filming in black and white, but that became cliché to you, right?

I’m glad you decided to go with color, and this film is extremely color-coded to great effect. It actually got me to thinking about Pawel Pawlikowski’s Cold War because that’s a black and white period film, which feels contemporary in its crispness. It’s timeless in a different way. Do you already see the red and the green, which are extremely prominent in Beanpole, when you’re in the script stage?

When I work on screenplays, I tend to just focus on the characters and the compositions. I don’t see the colors. I realized that the film needs to be in color when I started researching for this film and started reading the diaries of the people of the time. My DP [Kseniya Sereda] and I also discovered that this film could be in color when we started doing research and looked at the works of Moldovan artists and photographs as well.

I know you’ve been accused of casting actors in both Tesnota and Beanpole who bare a likeness to Putin from his youth. You’ve made it very clear that it was unintentional. This goes back to what we were talking about earlier: interpretation. Have people come up to you about other things in Beanpole that were completely unintended on your part?

There have been quite a few interesting feedbacks on things that I didn’t intend. For example, Masha in the end says her future child will have her same-shaped nose and some girl from the audience made the connection that Masha’s nose is constantly bleeding. So she took that to mean the newborn would never be purified—the baby will suffer the same fate as the main characters. She believed that the newborn will inherit the characters’ same trauma. This absolutely goes back to the freedom to find meaning. You can create your own meaning and it can be more powerful than mine.

Are you a very radical filmmaker in Russia? How is your work perceived at home?

Some people think that my films are boring. All I can say is that I don’t think I’m a commercial director. [laughs] I think it’s 50/50. You can’t make a unique film that everyone will love.

You stuck close to home with Tesnota in ‘90s Nalchik. You went period with Beanpole in Leningrad 1945. Where will you transport us to next?

Nowadays—modern days in North Caucasus because I’m a little saddened by the past. I want to make a story about now and about my region and I’m thinking that it will be a man’s story. But we’ll see what I end up doing.

Are you currently writing something?

I have some ideas. But I need to settle down and figure it out. I don’t want to rush it.

You were taught the tautology of existence in school—this idea that if you don’t aspire for growth every day, there’s no point to living. Do you believe we can achieve that growth by watching movies?

Of course I believe in that. I recently watched a movie called Wanda by Barbara Loden and this film just changed something inside of me. I truly believe that movies can change you. In good ways and bad ways, but it can change you.

In your view, what differentiates an auteur from a filmmaker?