Beyond the Hills: Cosmina Stratan

The co-recipient of the Best Actress honor at the Cannes Film Festival on her journalism background, entering a world riddled with controversy and her feature film debut in Cristian Mungiu’s Beyond the Hills. 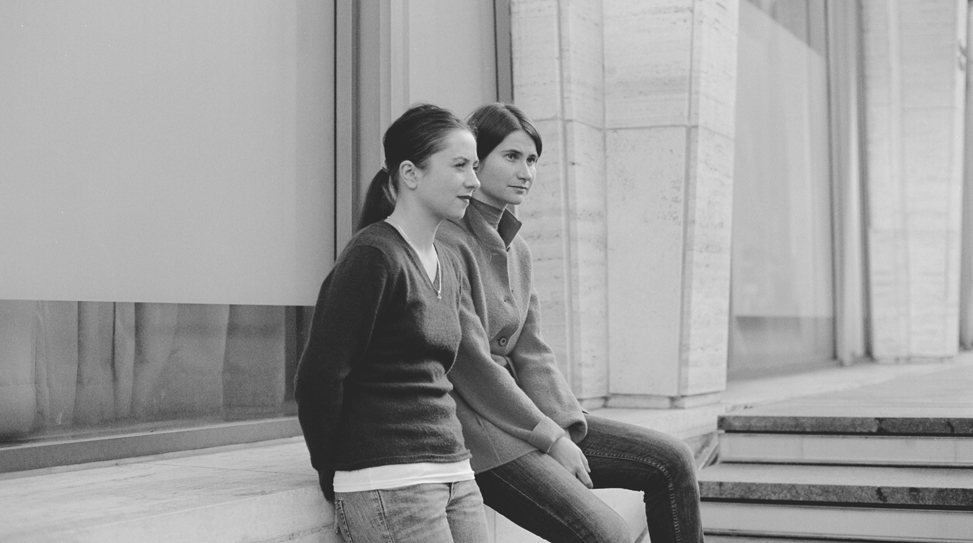 If you keep playing characters that are very similar to you, it's as though you're playing a caricature of yourself. If you try to embody a character that is so obviously different from you, that's acting.

Journalist-turned-actress Cosmina Stratan shared the Best Actress prize with her co-star Cristina Flutur at the 2012 Cannes Film Festival. To everyone’s surprise, it marked Stratan’s debut in a feature film—the same goes for Flutur—that instantly made her a national treasure in Romania, not to mention “the one to watch” on the international film festival circuit. Born in Iași, Romania in 1984, Stratan studied journalism and advertising before getting her degree in acting from the National University of Theater and Film in Bucharest. While she had acted in several films during her studies in school—splitting her time as a journalist and winning awards for her work as a TV reporter—Beyond the Hills truly put her on the map in the biggest way possible. And for good reason.

Inspired by true events and the non-fiction novels of former BBC reporter Tatiana Niculescu Bran, Beyond the Hills unfolds at an Orthodox convent where pious women toil dutifully under the watchful eye of an authoritarian priest. Stratan plays Voichita, a devout novice at a monastery, whose world is abruptly turned upside down when Alina (Cristina Flutur), a young woman from her past pays her a visit in the mountainous region of Romania where she now resides. As children, the two had formed a piercing bond at an orphanage that steps outside the lines of mere friendship. Now, Alina wants Voichita to leave her cloistered life and return with her to Germany. But when Voichita is disclined to go, an increasingly desperate Alina becomes unhinged and the nuns become convinced that she’s diabolically possessed—an exorcism is performed.

How did the acting bug get you? Tell us about your entry into the industry.

I got my start as a journalist. I studied journalism at a university in my hometown. I remember being in this meeting with my boss at a TV station in Bucharest where he gave a motivational speech telling us that we have the best job in the world as a reporter. That really stayed with me. Although I liked what I was doing, I knew I couldn’t go all the way in that field. I needed something else even though I didn’t know why. I started going to the theater a lot during that time. I just thought I should give acting a try. I wasn’t that young anymore, so I didn’t have anything to lose. I went to acting school and it really fit me. I dropped my journalism career and started going down this new path.

How did that lead to Beyond the Hills?

I recently found out that Cristian [Mungiu] saw Romanian actors based on their pictures. When the casting director showed him my picture, he said, “Um… No.” [Laughs] I’m grateful because the casting director was really persistent and told him to give me a shot. He told Cristian, “If you don’t have time to see her, let me see her. I’ll have her audition for a scene. Let’s just see what happens.” When I went in for the audition, I didn’t know it was a Cristian Mungiu movie. Cristian called me after he saw the audition tape and there was a month of auditions after that.

This was a rehearsal process for Cristian, but for me, it was a month of auditioning. I didn’t know he wanted me for the part during that month, so it was a long audition.

Were you familiar with the true events that inspired the film?

I was aware of it from my journalism background, but it wasn’t my main domain because I was in charge of reporting on cultural events. This was certainly controversial stuff at the time in Romania. When I read the script and gained better insight into what had happened, I didn’t want to read the novels because Cristian told me that the movie would be very different. He told me that I could read the novels if I wanted to, but I wanted one story to rely on. I didn’t want scattered information to inform a singular narrative. Maybe I’ll go back and read the novels now that we’re done.

I guess that makes sense considering that the film isn’t a play-by-play of the actual events.

It’s an inspired story even though it’s rooted in what actually occurred. The things that we believe to be true merely serve as a starting point.

Were you worried that this project might be too controversial?

I wasn’t back then. It’s really difficult to find a director who can deliver the kind of story as it was meant to be received. When you have that at your disposal, you don’t have time to think about anything else. I certainly had some questions of my own going in, but largely, I trusted that I was doing the right thing in committing to the project. I wasn’t afraid. I was curious.

What was the working relationship like with Cristian and your co-star Cristina [Flutur]?

Before I auditioned with Cristina, I had another audition with a girl who was supposed to play Alina. I thought my connection with the first girl was much stronger during the auditioning process. She was giving me so much to work off of. When I auditioned with Cristina, we didn’t share that same connection. Quite recently, I asked Cristian why he paired Cristina and me together. I asked him, “Did you think we had some sort of chemistry? I didn’t feel it.” He responded, “You’re right. You didn’t have that chemistry, but that’s what we need for the film.” I’m finding out now with these interviews that Cristina felt some sort of chemistry between us… At that first audition I thought, “What chemistry?” [Laughs] It’s sort of cool that she felt that way when I didn’t. The movie starts when Alina feels a certain way towards Voichita and Voichita doesn’t feel that way anymore towards Alina. The bond that brought them together in the past is getting weaker and weaker. I think Cristian was very smart in pairing us together.

What did you ask Cristian about this particular character at the beginning?

We didn’t really talk about the relationship between the girls. We had so many questions for Cristian at first: “Tell me… Are they in love? Are they sisters? What’s happening here?” [Laughs] I really love that he didn’t give me a straight answer. I started to realize that it’s not important to the story. In real life, we never know what the real truth is.

What were you thinking about before being summoned to the stage to pick up your Best Actress award at Cannes last year?

I was certainly shocked at first. I saw the movie for the first time at Cannes. I’m not very good at watching performances on screen, myself included of course. I get very judgmental when I see actors on screen. I don’t want to be like that, but I am. When it comes to me—

It’s heightened! It’s always like, “I gave it my all, but I could’ve done better…” I saw the movie again after that and everything was a little bit different. After I won the award at Cannes, my father told me to leave it behind. While I was trying to figure out what was happening to me and what had brought me to that point, I realized that the road there was full of ups and downs—a lot of ambiguities and insecurities. Awards can boost your confidence, but I don’t know if it’s real confidence. It seems artificial. You just have to go onto the next thing and give it your all again.

You already reached the pinnacle of achievement. If you keep looking at it, you might get too fixated on it.

I can’t do it. [Laughs] It’s there because it happened, but I can’t see it. I can acknowledge that I won the award at Cannes, but it’s not like I wear it on my forehead every day. I’m able to leave it behind. It’s a very nice moment that I had—maybe the best—but it’s just a memory now.

Are you interested in pursuing any specific kind of roles going forward?

I don’t know if I’m a good actress. Even after everything that’s happened, I don’t know if I have what it takes. With Beyond the Hills, I thought Voichita was so similar to me and I could do it, but after a month or so, I discovered that she was so different from me. From now on, I want to see if I can play characters that are extremely different from me. I think that’s the whole point of acting. If you keep playing characters that are very similar to you, it’s as though you’re playing a caricature of yourself. If you try to embody a character that is so obviously different from you, that’s acting.

Do you think your background in journalism attracts you to films that are inspired by true stories or is that not so important?

It’s not necessarily that important because every character you play has to feel real no matter what. Even if it’s a fictional story, an actor has to make the audience believe that what’s happening is real. I don’t want to digress from that point-of-view. We have to believe in things that aren’t there when we watch movies. I didn’t even read the novels that inspired Beyond the Hills. You commit to a character and believe that everything is real life. It doesn’t matter if something happened or not.

What’s the landscape of Romanian Cinema like these days?

I’m still too new in this business to comment. [Laughs] This is my first movie and I was still at university when we did this. I hadn’t worked with other directors yet. There are three or four directors that I really admire and would like to work with. I’m glad that we have filmmakers that are frank… I don’t know what the Romanian New Wave means, for instance.

I honestly don’t know much about it either. I’m not knowledgeable enough about Romanian cinema to even pretend like I know.

Cristian mentioned to me that Romanian cinema isn’t so fixated on the prospects of commercial success that you see elsewhere in the world because Romanian films are publicly funded and you’re working within small budgets. You don’t have investors breathing down your neck about making a profit.

I think that’s why people always ask Cristian why he continues to make films in Romania. “What are you still doing there?” [Laughs] He can only make the kind of movies that he wants to make there. We don’t have a systematic way of making movies in Romania. Everything is much more loose and that gives filmmakers a lot of freedom.

What have you noticed in terms of how audiences interpret or receive the film around the world? Did anything catch your eye?

I think everyone receives the film in a similar way. This isn’t a movie about Romania. If a movie can’t travel and stops at certain borders, it’s not cinema anymore. I hope that the story resonates with everyone around the world. It’s a universal story. Seeing it from a Romanian context makes it a very colorful one, but that’s just a starting point.