The Dane on coming Stateside for D2: The Mighty Ducks, his father’s sage advice, and Amazon’s The Man in the High Castle. 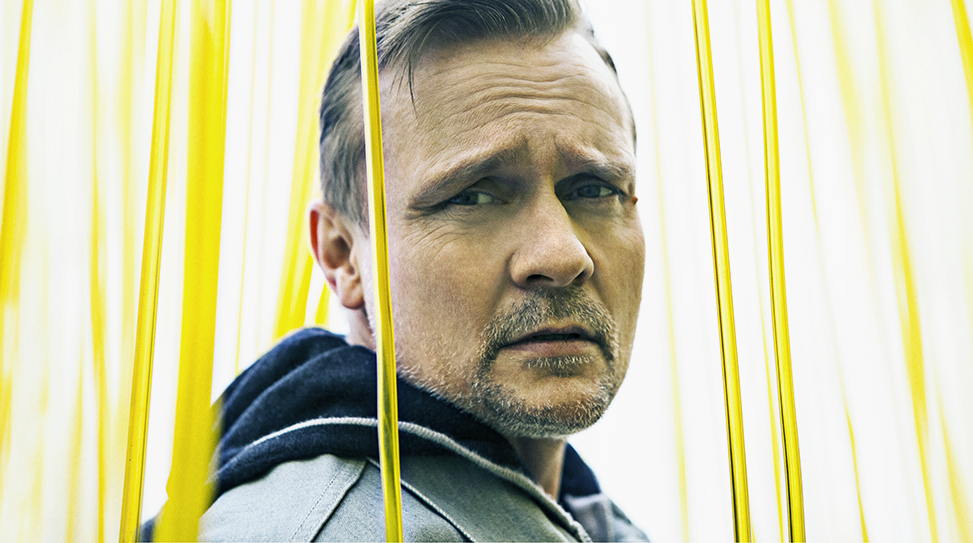 He’s haunted by the atrocities committed by the Reich, and his efforts to avert war between the Japanese and the Nazi empire is for atonement.

Imagine for a moment the Axis powers claimed victory in World War II, and carry that awful daydream forward 17 years to 1962. The United States has been partitioned into three parts: The Japanese puppet state of “the Pacific States of America,” the Nazi puppet state comprising the eastern half of the former United States, and a neutral zone acting as a buffer between the two areas called “the Rocky Mountain States.” This alternate history plays out in Amazon’s original series The Man in the High Castle, based on sci-fi author Philip K. Dick’s iconic novel of the same name.

The Man in the High Castle season one is now available to stream exclusively on Amazon Prime.

Disney brought you Stateside for D2: The Mighty Ducks. Is that when you decided to stay?

That’s it. That was my first U.S. project. The movie did quite well, and you get calls after that. I just thought that maybe the States would be the place for me to explore. I went back and forth [to Denmark] a few times, but moved permanently after awhile.

That movie made a huge impression on me. It came out when I was 10, so I guess I was the target audience. I had the film on VHS—awful, bulky plastic packaging and all.

[Laughs] It’s interesting how the movie seems to have had an impact on a lot of kids who grew up at that time. I guess there weren’t too many products for kids back then, so it was nice to have something that people could respond to.

These are some things I know about you, as found on the Internet: You have a degree in economics and you’ve always loved movies, but don’t come from a family working in entertainment. How did you find yourself studying acting in London?

Movies as a medium—great acting and filmmaking—can transport you to a different universe, a different place. This is something I loved since I was very young. When I was growing up, my dad said to me, “Try to find something you love to do and find a way to get paid for it.” But I’m sure he didn’t envision me becoming an actor. After I finished my degree, I traveled a bit. As Hans Christian Andersen said, “To travel is to live.” I ultimately ended up starting my career in London doing a few projects there. Then I got the call for The Mighty Ducks, bringing me to the States.

Your dad maybe didn’t envision it, but you did become an actor. How did he react?

I reminded him what he said. [Laughs] I don’t think my dad really thought that I would go through with it, but it ultimately became my vocation. My parents have always been very supportive.

I’m just imagining your dad giving you this great advice, then you decide to pursue acting, and he says to you, “Um, that’s not what I was talking about…”

[Laughs] Well, that’s pretty much how it went.

I watched The Man in the High Castle, 10 hours straight. I know you like to binge-watch, too.

You guys shot the pilot without knowing whether it would go to series, right? You aired the pilot then went back to shoot the rest of the series when it got picked up?

That’s right. The novelty is that, when Amazon put [the pilot] out there, they included the audience to vote if it should go to series. We had a feeling what we had done was something special, but you ultimately didn’t know. You wake up one morning and read the first critics’ reviews that say it’s Amazon’s House of Cards, then realize this could be something special. When both audiences and critics respond to it the same way, you think, “This is really happening.”

How attached were you to the source material? I haven’t read it myself, but understand there are some minor and other very stark differences between the novel and the series.

I think that was one of the big challenges for Frank Spotnitz, the show’s creator. It’s about figuring out how to make the novel dramatic while, at the same time, honoring such a great piece of literature, which I think he managed very well. Frank is a great communicator and he’s really good at bridging this gap between 1945 up to 1962, a 17-year period of fictitious, alternate history.

Rudolph has done terrible things for the Reich that even tore his own family apart. He’s a Nazi with a conscience. How important is it to you to like the character that you’re playing?

Nearly all parts are very different from who you are as a person—and consider the time period. He’s a flawed character who has done terrible things, but despite what that is, I think he turns the corner. He’s haunted by the atrocities committed by the Reich, and his efforts to avert war between the Japanese and the Nazi empire is for atonement. He’s trying to seek redemption for his wrongs.

There’s genius in the show’s details: “Edelweiss” in the opening titles. It was originally written for The Sound of Music, a play that wouldn’t exist had the Nazis won the war.

There are so many clever details in this show.

Carsten, do you speak German fluently?

Well, I’ve worked in Germany for both television and film. I grew up with that because it’s something I had to learn in school. It’s not something I speak every day.

A lot of Danish people speak conversational German, though, don’t they?

I couldn’t tell you the exact ratio. Most people study German in school, to a certain extent, if they choose to do that. But some people choose to learn French. At the time when I went to school, there wasn’t a choice—I had to learn German.

What was your first professional acting gig? Was it The Fruit Machine?

It was the The Fruit Machine, yeah. That was my first real acting gig.

What have been some of your career highlights on a personal level?

I like certain things for different reasons. You could accept a job at a certain time in your life for the experience. I did a movie called The Black Pimpernel that takes place in 1973, about a traumatic time in Chilean history. It was right around the time when Michelle Bachelet was about to be elected the first female President of Chile. I love traveling, so I gravitate toward projects that involve that. I also like period pieces, so The Three Musketeers was a fun thing to do. I’m also on a Danish TV show that’s on Netflix called Rita. And, of course, The Man in the High Castle. I’m a big Philip K. Dick fan. A lot of people look at it as one of the crown jewels of alternate reality.

That’s a really good question. What if we didn’t pay attention to global warming? Where will our world be in 25 years time?