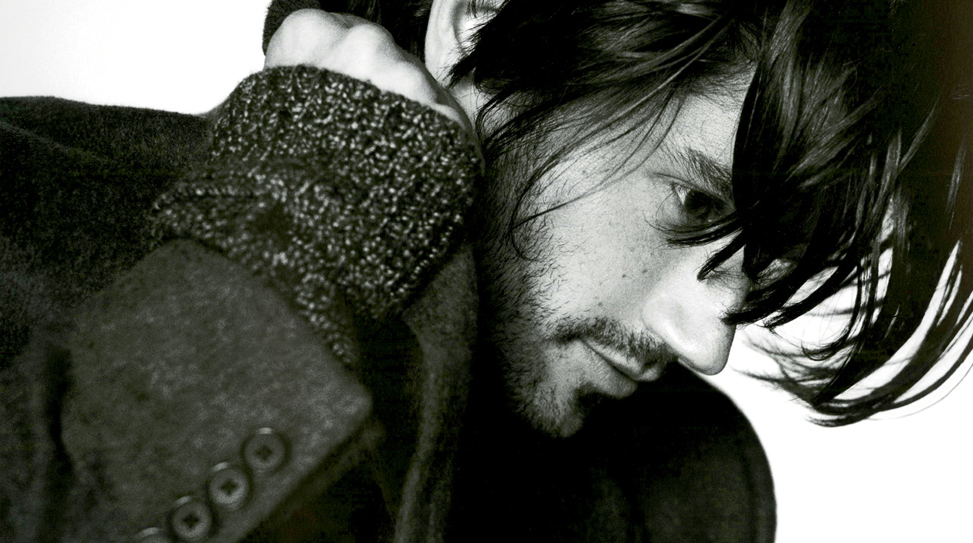 I've been investigating things that humanity inadvertently throws away.

Full disclosure. We have a bit of history here with Andrew Levitas, likely something he doesn’t remember. When we first met the guy in Los Angeles several years ago, he was going over a script in his trailer on the set of an independent film. That’s a movie star, we thought. It was the kind of piercing image that stays with you for a long time. A couple years went by and he blips on our radar again, for his paintings. Then the photography and the sculptures came. Now he has a new film in the can, which he wrote and directed. The Garrett Hedlund and Amy Adams vehicle is called Lullaby, which (according to the somewhat dubious IMDB) tells the story of “a man who’s estranged from his family receives word that his father has chosen to take himself off life support within 48 hours.” We better let Levitas handle this himself.

You cast quite a wide net when it comes to your creative endeavors. Painting, photography, acting, producing, and now you’re writing and directing. Is there one particular thing that you wanted to do in the beginning?

The thing that I always come back to is being a painter. I love sculpting, photography and absolutely love filmmaking–writing is okay too–but at my center, I’ll always be a painter. That will always be my purest form of expression.

How did that passion for painting come about?

I think it was always there and it never left. Every kid at 3 years old is a painter. At a certain point, they take it away from you. But no one took it away from me.

Did you invest in a lot of different hobbies when you were little?

I never shied away from things. There was never an objective to be anything. With all of this stuff, there was never a goal. I would have an idea that I thought would make for a great painting and then just start working. I would have my camera equipment and shoot things that I thought were interesting. If I have a story to tell and I can’t tell it through sculpture, I’ll write a poem or a screenplay, so on and so forth. I think I’ve always been that way… I have different ideas, feelings and life experiences that have shown themselves, that are best suited for different mediums.

You grew up around a rich community of creative people in New York City that bundled you up, wouldn’t you say?

I would. I was fortunate enough that I found myself at a repertory company at a fairly young age dancing, singing and writing. I met quite a lot of great artists along the way. It wasn’t really an affluent community though. It was creatively rich, for sure.

Can you recall any lasting memories or influences that might have informed you early on?

Ever since I can remember, I was going to the theater, walking into museums, traveling and just seeing the world. It all kind of blends together to tell you the truth. I’m not the kind of person who sits around thinking about their past so much. In fact, I have a horrible memory because I’m not really interested in my past. I’m very much about living in the present and thinking about tomorrow. I do know that I was incredibly fortunate to have great friends and a loving family. I think something like that definitely contributed to me not feeling scared to try different things.

What brought you out to Los Angeles?

It was sort of a fluke. Kind of out of nowhere, I was cast in a starring role on a TV series for the WB network, which was the precursor for the CW. I had never been to L.A. prior to that and didn’t have any particular interest in it. But seemed like a cool life experience to take that show, so I moved out here. It proved to be a gift that keeps on giving. I call California my second home now and have a great community of friends out here. It has been a great influence on my life. There’s a certain brand of people who migrate to California as opposed to those who migrate to New York. I was fortunate to meet so many different kinds of people because of that.

When you first started acting, was it was everything you thought it would be?

At the time, I certainly enjoyed myself, meeting different people and learning about the business. But I was never that interested in being an actor. I didn’t find it incredibly creative. Even at the age of 18 or 19 years old, it didn’t seem like the best form of expression for me. It wasn’t certain that I was capable of expressing myself as an actor than I was in other ways. This thought is something I always carried with me as a working actor. I’ll still occasionally do things because it sounds fun or I have a connection to the material, but for the most part, that’s not my best skill set in life.

Are you headed in the direction of being behind the camera indefinitely?

I never considered myself an actor. I consider acting probably the fifth or sixth thing that has any weight on the list of things I want to do. I really don’t spend that much time acting, really. But I love acting because it’s fun. It’s just not that creative for me.

How do you manage your day-to-day life? Do you keep a tick list?

There’s no rhyme or reason other than an inspiration or an idea pops into my head, and then I look for the best way to express it. That applies to everything I do. I’ve put out quite a lot of work in different mediums, but there’s a ton of work that haven’t made their way out of the studio. There’s no tick list. There’s no plan. You just tell stories until you have nothing left to say. The real gift of being an artist is having this job where you get to observe the world. You look at your friends, your family, yourself and the people around you… If you have the luxury of having that time.

You seldom hear about people who have their hands in both entertainment—deep inside Hollywood—and the fine arts. Do you ever run into problems when you’re so passionately tugged in both directions?

I’m not really a part of the art establishment or the Hollywood establishment. I’m not trying to live by anyone’s rules or participate in anyone’s game. If anything, I would say that having those two things are really liberating. It makes me more honest in my work because I have the other one.

What do you enjoy the most about producing and what do you dislike?

I’m just trying to be supportive of other filmmakers, writers, actors and creative people. With every film that I’ve been involved in, there was a personal story behind why I wanted to spend my time supporting it. You contribute to help other people’s stories come to life. That’s what I aim for.

What can you reveal about Regular Boy? I couldn’t find much information about it online, but I’m quite taken by the cast.

It’s something that we’ll probably shoot later this year or early next year. We’ve already started casting because the script is so strong, but it’s still potentially a ways off. It’s based on a true story about Michele Civetta, a very talented guy. It explores the way we treat our families and look at our children. It’s about how society views things and how we get stuck in the mud. Truly, I hate to talk too much about other people’s projects even though I’m producing it. It’s the director’s vision and he should be the one to talk about it.

But you have such a strong sense of what you want. It must be difficult in the producing seat.

It absolutely is because I’m not interested in getting in anybody’s way, but I want to remain a vital creative voice in the room. Ultimately, you’re there to nurture the vision that the director has. In that sense, I guess I don’t have a problem staying on my side of things and not meddling. Fortunately, every person that I’ve worked with have been very bright, competent and creative. You learn something when you watch those kinds of people. When it’s not so much about you and you don’t have that kind of pressure, you learn.

How steep was the learning curve for you on Lullaby as a director?

I found myself surprisingly well-equipped. I’m the kind of person who’s very prepared. Also, with all the different hats that I’ve worn over the years, it built my skill set in a unique way. From day one of prep, I felt very comfortable and didn’t really hit any bumps along the way. I was fortunate have the most exceptional crew and cast. They were all so trusting. The fact of it is that when you go to war with the absolute greatest soldiers, you have a good chance of winning.

Your acting background must have played a big role in this.

I hate to put you on the spot, but having been on both sides of the camera now, what’s the most disastrous direction you can give an actor?

I think the biggest mistake is for the director to not listen to any of the other artists in the room. At the end of the day, filmmaking is a collaborative process. You hire people that you want to collaborate with. It’s not about just looking for another paintbrush, if you will. They should be active partners. The best way to get the most out of actors is to realize that it’s their film as well. They’re there to serve your pleasure as much as they’re serving their own.

How did you assemble this amazing cast for Lullaby?

It was a fairly long process. It’s the same as how anything comes together. Each actor had read the script, we met with them and we all fell in love with the story. Garrett Hedlund is such a smart actor who couldn’t be more lovely. Amy Adams is the most giving and remarkable woman imaginable. Things just fell into place. The list goes on and on. I don’t know how I got so lucky, frankly.

When did you start writing the screenplay and why did you want to tell this particular story?

This story is loosely based on the final hours of my father’s life and the knowledge that he imparted on me, my sister and my mother so that we would be set without him. It was such an incredible gift that he gave to us. It sat with me for years after his passing. I didn’t really write this script to make a film out of it, it was just something I wanted to write down. It wasn’t a novel, a poem or a short story. It became a movie script and it just went from there.

Is there a release date?

We don’t have one yet. We just showed it for the first time to a few people. We literally just finished the film.

What kind of movies did you grow up watching? Any figures that you looked up to?

What are you looking forward to in 2013 and beyond?

I was up all night working on a new sculpture series. I’ve been investigating things that humanity inadvertently throws away. You say that I’ve done so much or whatever, but it’s not the medium that changes. It’s the ideas that are worth exploring.