The breakout star of Filly Brown on her humble beginnings, fighting for her roots and what it takes to endure Hollywood. 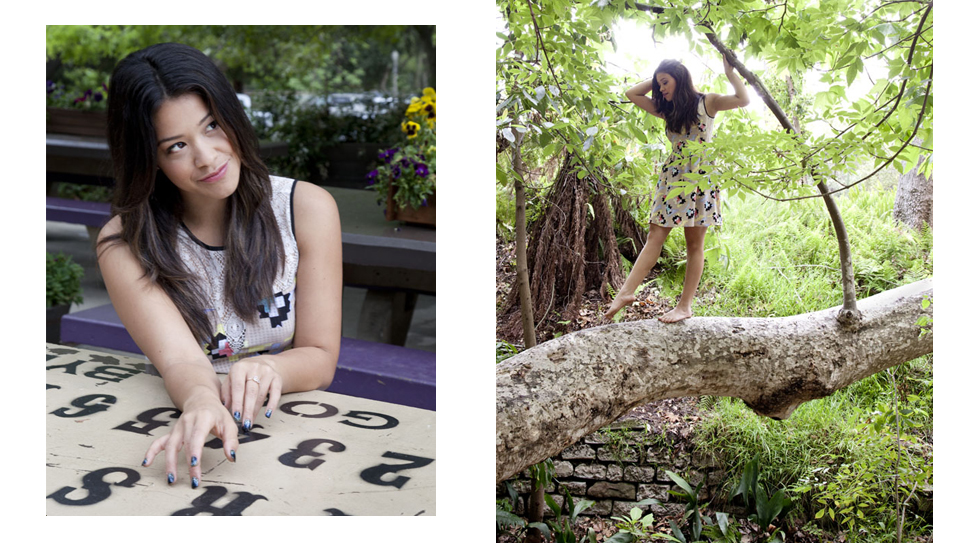 I promised myself that if I'm somehow able to follow my dreams as an actress, I would make it easier for everybody else.

More than a hundred new films unspool at the Sundance Film Festival every January, many of them never to be seen again. So what is it that draws celebrities, studio moguls and journalists to these snowbound screenings year after year? It’s the hope that they’ll discover something new and groundbreaking, fresh and original–something that in turn will wow audiences everywhere else. After all, Sundance has a long history of turning obscure talent into showbiz Cinderellas or, if you prefer, introduce the world to great artists who might not otherwise have seen the light of day.

Catching the lucky break most actors would kill for, Gina Rodriguez catapulted her career with Filly Brown at Sundance in 2012. Hailed that year as an “It Girl” alongside Elizabeth Olsen and Brit Marling, her titular role as a young woman angling for hip-hop stardom as a means to help spring her mother from prison lassoed the industry without much warning. Rodriguez was hotly tipped for big things and they were certainly right about that. Now with a string of features and a TV pilot to her name, the actress gives us her side of the Cinderella story.

It looks like a whole lot has happened since we met at Sundance last year.

Sundance was baller! There was so much love there. You saw it, you know. It was probably the best experience of my life to date. Filly Brown was picked up by a distributor and they were going to release it that September, but the company folded.

You never know what’s going to happen. It’s freakin’ life, man. Lionsgate eventually picked it up and that was phenomenal. And then Jenni [Rivera] passed…

I’m sure that hit you pretty hard, so we don’t have to dwell on it too much. Was acting always the end goal for you?

I actually started out as a salsa dancer. I did that for about ten years. I toured all over the place with different companies. My final performance was at the World’s Salsa Congress in Puerto Rico when I was 17 years old. At that point, I realized acting was what I really wanted to do. I love dancing, but I wanted to talk! I wanted to do more than just dance to express myself as a performer.

So that brought you to NYU.

NYU was my dream school, so it meant everything in the world for me to go there. I come from a really humble background and money wasn’t exactly falling from trees. That’s why I care so much about the younger generation. They should be given the opportunity and the resources to get a college education. I know how important that was to me when I was growing up. It was definitely scary and a struggle for me to leave Chicago, in the little hood that I grew up in. I promised myself that if I’m somehow able to follow my dreams as an actress, I would make it easier for everybody else. It has been such a blessing to have so many people support me along the way. Their support gives me so much confidence. We both know that I’m not this amazonian princess by nature. [Laughs] I’ve been working nonstop for a long time. Now I have this movie coming out in a matter days! I don’t know what the outcome will be, but I’m going to continue to work hard.

You’re a big proponent of minorities working in film and there’s no denying that. What have you found are the most effective ways in which to get your voice heard in the industry?

That’s important–all minorities. I think the Latino community is following right behind the African American community. It’s important that people of every background is represented. The strongest way that I can contribute is to become a positive role model. It’s when you stand your ground that you create the biggest ripples. I can talk all day, every day about how great Latinos are, but if I’m not actively trying to create a space in this industry that promotes a positive image of us, I’m just contributing to the problem. When young people start seeing themselves in a different light through different kinds of characters, that has the ability to inspire and empower.

It’s a tough game to play. All actors struggle to land roles to begin with, but you, Gina, have to also consider if, not only is the character interesting, is she a good role model for women? Is she a positive representation of the Latino community as a whole?

That’s 100% right. I have this conversation with my parents all the time. My parents obviously love me and don’t want to see me go broke. They sometimes call me the sacrificial lamb. [Laughs] Sometimes they just want to see me act as much as I can and I totally understand that. Parents want the best for their kids. But I’m not naive to industry politics either and I believe in the first signs of protest. Did Rosa Parks know what effect she would have in the long run? No. There’s strength in saying, this is not the traditional way of doing things, but there’s no way you’re going to tell me it’s not possible. There are projects that come my way all the time that I know would be easier for me to get, that would pay the bills, that would possibly take me to the next level… What I’ve come to realize is that I enjoy being able to say, I stand by every decision that I make.

It takes a certain kind of person to drive that point home and you do it so well.

I can’t say that I’m not scared at times, you know? I do get scared if the choices that I make aren’t the “popular” ones. But at the end of the day, at least my integrity will be intact. It might not be the whole step, but maybe I can take us an inch further as a minority. Then I can live with myself. Also, it’s not like I’m too good for anyone or something. I’m flawed, broken and I haven’t arrived yet. I’m working to become a better person every day like everyone else. When God gives you blessings like this, you just have to do right by them.

By the way, did you know that the MTV Movie Awards has this new category now for Best Latino Actor? I think they started it last year.

The nominations went to Javier Bardem, Benicio del Toro, Salma Hayek, Michael Peña and John Ortiz. I don’t think they televised that though. It’s all a bit odd.

That’s really interesting. I was flying in from Miami yesterday so I missed the whole thing. Just hearing that though, I feel kind of conflicted about it. It seems generous of them, I guess? They’re putting extreme emphasis on Latino talent.

[Laughs] It is because then I think, I’m an actress first. It just so happens that I’m Latina. Were these actors nominated in any of the other categories?

I can’t recall the entire list, but I know Javier Bardem was up for Best Villain as well.

That’s awesome. I can’t speak for the entire community, but the feeling I get from my Latino peers is that it’s important to make clear we’re actors first. My concern regarding MTV would be, are we now excluding all the other ethnic groups? Why don’t we have Best Asian Actor? Why don’t we have Best African American Actor? Why are we now including and excluding people based on their race? It’s like there’s Hollywood and then there’s Latino Hollywood… At the same time, I applaud them for making an effort because who knows where their intentions came from?

Just to circle back to Filly Brown, you worked with Youssef [Delara] and Michael [D. Olmos] who have since become frequent collaborators of yours.

I love those boys! They’re so talented. I feel safe with them because they know what they’re doing. They have a clear vision and work from the heart, really. They wanted to push the Latino community forward and embrace our culture so fully. That alone is so beautiful to me. Everyone loves to make art for to push their own dreams forward, but these guys also make art for art’s sake and the sake of an entire community. Now I’m always on the look out for people similar to them.

Do you guys have a shorthand now?

Pretty much. Youssef and I’m about to work on our third project together. With our second collaboration on Snap, we had that shorthand right away. He didn’t even have to finish his sentences and I was ready to go because we were on the same page about everything. We have this trust between us and I have that same trust with Michael as well. I can’t wait to work with Michael again. I’m also very excited to work with Victor [Teran] again after Snap. He’s co-directing Marching Banda with Youssef. They don’t coddle me. They tell me exactly what they want and that’s all you can ask for as an actor. These boys understand that about me.

I’m trying to keep track of all these projects on the horizon. You’re working on Sleeping with the Fishes with Nicole Gomez-Fisher, who has an acting background herself. Is something like that helpful to you?

She was a comedian, a phenomenal writer and an actress. When a director has some kind of knowledge of performance or even a good grasp of an actor’s vocabulary, it’s definitely easier to communicate with them. I think that always makes for a smoother process on set. When somebody comes over to you and says, I want you to do it more, it’s like, what do you mean you want me to do it more? When they tell you what your character’s intentions are, for instance, there’s something to be said for directors who understand vulnerability and the kind of pressure you’re under when you’re surrounded by lights and cameras. Nicole, especially on her first feature, did a tremendous job. This is a really adorable comedy. I can’t wait to see what she does next.

And you have this TV show Wild Blue. What was pilot season like?

Pilot season was such a whirlwind! I was trying so hard during pilot season. [Laughs] As much as it’s about talent, it also has so much to do with endurance. You can only hear “no” so many times, over and over again. You just get up, dust off your knees and tell yourself you’re not going to stop. When the script for Wild Blue came across my desk, it was so good. My character is so strong and breaks so many stereotypes. I play an aviator pilot… A Latina aviator pilot. I’m playing Maverick in Top Gun! This is so awesome. I’m so proud of this project. We’re shooting that in June. It got pushed back because we were waiting for a Navy carrier. The writers are from the show Justified and the producers are from Breaking Bad. You get so used to hearing “no” and you can’t help but wonder why. I can’t say that it doesn’t hurt and you just hope that God has a plan for you. There couldn’t have been a better plan for me than this. This is the one that was waiting for me.