The rising actor on discovering his craft, doing away with career templates, and his leading role in Owen Kline’s Funny Pages. 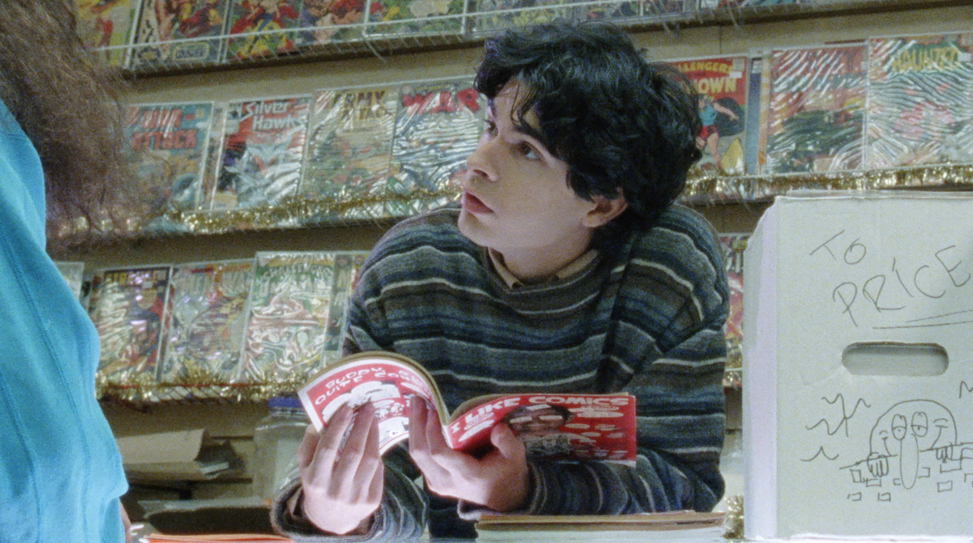 There had been actors that I’d held onto as templates—maybe to a crazy degree where it’s like, 'I’m just disappointing myself now.' Maybe that’s just not a good way to go, you know?

Robert (Daniel Zolghadri) spends his days working part-time at a local comic book store, noodling around with his fellow cartoon enthusiast friend, Miles (Miles Emanuel). Following the death of his mentor in a freak car accident in the film’s opening, Robert decides that school no longer interests him, announcing to his suburban New Jersey parents (Maria Dizzia and Josh Pais) that he’s moving out to focus on cartooning full-time. He finds a cheap, rancid basement to share with his new landlord and an unforeseen roommate—grotesque creations who could’ve sprung from the sketches of one of Robert’s artistic heroes. There’s a bright spot: he also lands a job working for a public defender, where he meets one of her clients, Wallace (Matthew Maher), a screw-loose cannon who was once a colorist for the fabled Image Comics. Wallace, too, feels like he festered under the hand of Robert Crumb. With Wallace’s abrasive personality casting serious doubt on the probability of a long-term mentorship, the two form a fragile bond. It’s all a recipe for disaster.

Zolghadri is a compelling lead with a promising future ahead. Surrounded by a cast of offbeat character actors, the 23-year-old actor shines brightly in a deliberately fraught tableau. Funny Pages world premiered in the Directors’ Fortnight sidebar at this year’s Cannes Film Festival.

Hi, Daniel. I loved Funny Pages—and your performance most of all. You’re a discovery.

Wow, thank you. That’s such a nice compliment.

So how did this project come to you?

I auditioned for it. I had one meeting with Owen [Kline] and that was it basically. Very standard.

You were perfectly cast. You are Robert to me, even now as we’re sitting here talking. I’m sure that’ll change as I find out more about you. How did you relate to this character?

When we were shooting this, the character really resonated with me. I was going through pretty much exactly what he was going through: I wanted to drop out of school, feeling very impassioned by these impulses and fantasies of escaping where I’m from and doing something that’s important and means something to me. These were impulses that I think a lot of young people in high school feel, that also in some ways have a hint of self-destruction, like befriending this guy who’s not great for you or moving out of your house and into this apartment, you know?

It’s a tricky, transitional period to navigate where you’re not only setting out to chase dreams—you’re simply entering adulthood. Did you identify with the comic book obsession at all?

When I was really little, I was into picture books and cartoons and stuff like that, but I was never a fanatic. I definitely didn’t know as much as Owen on this topic.

I hear that Owen originally wanted to become a comic book artist and that was something he realized at 11 years old. I wonder how much of Robert was intended to be autobiographical.

Not really, I think. What he says is, there’s a lot of experience that he’s shared with Robert, but at the end of the day, it’s a different character. I think a lot of what inspired it was Robert like moving into this shitty apartment and having these stranger old men as roommates. It was just these situational things that Owen went through that he thought would be interesting to tell in a movie.

One detail I know of Owen that imbues the film is that he’s left-handed, and you played that.

Yeah, that’s true. They hired a guy to come in [for close-ups of my hands when Robert is inking], but if I remember correctly, the guy had really hairy, muscly hands. Owen would not have that.

[laughs] He was very neurotic about it, and rightfully so. As a last minute adjustment, Owen had to do what that guy was supposed to do but left-handedly. From then on, Robert was left-handed.

And about that swampy basement apartment… It really feels like you’re stepping through a kind of portal going down there—a real sweaty hell, you know? Was it as gnarly as it looks?

Pretty much, yeah. It was what you see. That was literally built, and the whole basement was so beautifully decorated. It felt like it came straight out of a twisted comic book, like a lot of the movie. It was definitely as chaotic and strange as it appears in the movie.

The film really does feel like a cartoon in places, especially down in that basement with your creepy housemates and towards the end of the film where things devolve even more into a kind of Looney Tunes madness. When did it strike you like, “So this is what we’re making”?

Yeah, yeah, I had that realization every day. Every scene that we shot really reinforced it like, “Okay, this is what it’s gonna be.” And there’s so much more that we shot that is not in the movie.

The film has such a distinct flavor. This is Owen’s first feature so it serves as an introduction, but I did go into it loving the Safdie Brothers (the film’s producers). You can definitely feel their presence, their influence, in the look, the sound, the textures, and the characterizations. I wonder just how involved they were creatively throughout the process.

Well, I know they really helped Owen develop it beforehand, I’m sure through a lot of script revisions and things like that. I think they really took him under their wing. They were very involved when I was involved, too. They were on set all the time, and so was Ronnie Bronstein. Elara [Pictures] really helped nurture it.

It really echoes the film’s theme of mentorship.

Right, right, yeah. The movie is very lucky to have had the team that was involved with it.

We’re with Robert at the start of his journey as an artist. When did you first want to act?

I’d always done bits around the house with my family. I guess I had a performative side to me. But the first time I thought about the idea was when I was like 7 or 8. My sister was approached to go to acting school or something and then I was like, “I’d like to do that.” I got involved pretty young.

Are there actors you hold up as templates in terms of what you’d like to do going forward?

Yeah, I don’t know… I used to have so many. There had been actors that I’d held onto as templates—maybe to a crazy degree where it’s like, “I’m just disappointing myself now.” Maybe that’s just not a good way to go, you know? I think in the past maybe two years, I tried to let go of anything to hold up as a template or as a career path like, “This is the trajectory I want” or “This is the kind of thing I want to do,” and sort of letting things unfold as I naturally would do them.

That’s the healthy approach. I love how Funny Pages is bookended by these drawing lessons, right? And Robert’s two mentors are antithetical. Simply, one cares about the soul of an artist, whereas the other one entirely about form. I wonder if that might serve as reminders about any mentors you might’ve had yourself, either in school or working on set.

That’s a good question. Honestly, Matt Maher, who plays Wallace. I thought I had a really good friendship with him. I admire him. I wanted to impress him and do good in my scenes with him.

You’re going to have so many more opportunities in your career where people like him are bound to show up. They’ll show up unannounced and then suddenly they’re accounted for.

Thank you. I hope so.

It was, like you said, a transitional time in his life. What happens to him was probably the first time something hit him hard like that. So I think he’s digesting that, and probably getting humbled by it. I think for the whole movie he’s just kind of pushing himself down a self-destructive path. After that, I think there’s nowhere else to go but gravitate towards more optimism or positivity. I think he’ll patch things up with Miles and have a newfound appreciation for their friendship. Hopefully, Robert will find appreciation for the sweeter things in life.