Gong Yoo: Survival of the Fittest 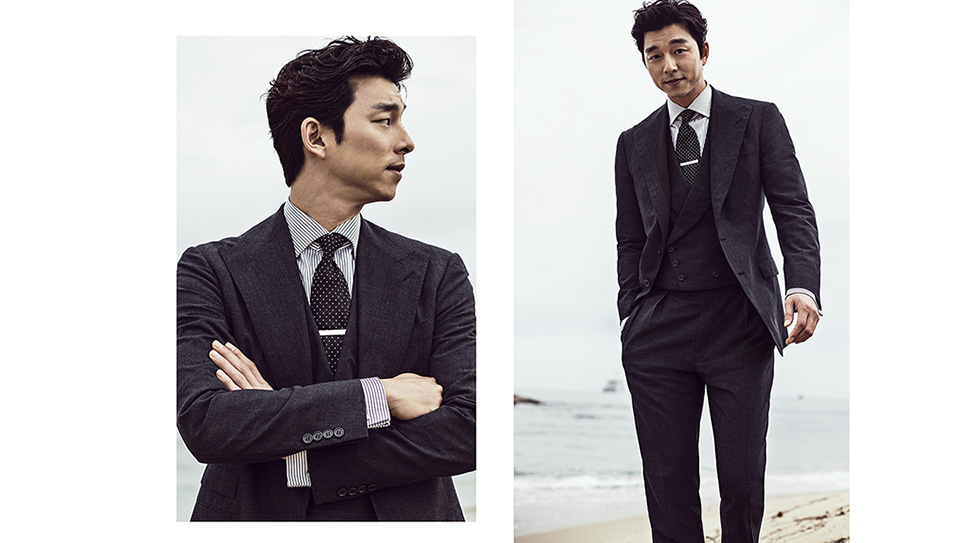 We wanted to show just how scary people can be—not zombies.

This is an interesting thought: how would conscription impact Hollywood and its promising young male stars, the leading men of tomorrow? “No Star Trek Beyond for you, Anton Yelchin!” No exceptions. “I’ve just about had it up to here with your X-Men shenanigans, Nicholas Hoult!” Your hopes and dreams dashed like that, or just put on hold for a year or two—if you’re so lucky.

The same fate of South Korean citizens—if you’re a guy, anyway—Gong Yoo served a two-year mandatory military service in his late 20s, at the height of his fame in 2007. By then, the wildly popular TV series The 1st Shop of Coffee Prince had turned the model-turned-actor into a household name back home and upped his demand overseas as a “Hallyu” star, or as part of “The Korean Wave,” referring to the increased global visibility of South Korean culture from the ’90s forward. Two years away sounds like a death sentence in entertainment, but despite Gong’s sparse filmography, he successfully returned to the height of it all. And it’s not strange that, as he toughened up in the military, so did his artistic palate. Once known for his romantic comedies, we saw Gong taking on Silenced (2011), a controversial film based on actual events in which young deaf students were sexually abused by faculty members at a South Korean school for the hearing-impaired in the early ’00s, and step into the shoes of a North Korean spy in The Suspect (2013).

This year, Cannes unspooled Yeon-Sang Ho’s Midnight entry Train to Busan, which finds Gong trapped on the KTX (South Korea’s high-speed rail system) and caught up in a zombie apocalypse. This November, the actor will return to television following a four-year absence with Dokkaebi, a tale of a goblin and a grim reaper working together to help the dead pass through to the next world.

We stole Gong away for a quick chat following the Cannes premiere of Train to Busan.

You had an incredibly enthusiastic response at the premiere. It’s my fifth year at Cannes and I hadn’t experienced anything quite like that. Was it your first time seeing the finished film?

It was. To be honest, I was a bit worried in the beginning because this is director Yeon-Sang Ho’s first live action film. But before we started shooting, we shared conversations about embedding a strong message against the backdrop of this zombie movie and that was very satisfying to me. I wonder if you felt the message that people are scarier than zombies when you saw the movie.

I think we’re the scariest thing on the planet. I’m more and more convinced of this every day.

We wanted to communicate that. We wanted to show just how scary people can be—not zombies.

In every practical sense, Train to Busan is a horror film. But it’s also incredibly moving and sad. Did you find the physical or emotional demands more challenging on this shoot?

To me, acting is difficult in general. It was hard work, both physically and mentally. But it would be embarrassing for me to admit that I was tired on this shoot because the actors portraying the zombies were so hard-working. I couldn’t possibly complain about the things I went through when what was expected of them physically was so much greater. They were put through a lot.

Some time has passed since you wrapped on the film. I’m assuming seeing the film last night conjured a lot of memories from the shoot. Would you be open to sharing one of them?

This is obviously fictional, but there were times when I was genuinely scared. When you’re operating on fear while in character, in this narrow space of the train, and one of the zombies grab you by accident, it’s scary. That’s for the blooper real, but the expression on my face is real.

You spend the majority of this film running for your life, and I totally bought into all of it.

I’m running like hell all throughout this movie and I’m not faking that. I was scared. [Laughs] Even when we weren’t shooting, I didn’t go near the actors with their zombie make-ups on.

Yeon-Sang Ho comes from the world of animation and this is his first live action film, as you mentioned before. What observations did you make about him as a director and person?

If you’re going to work within the zombie genre, which had never been explored too much in South Korean cinema before, you need to have the confidence to see it through. I saw that confidence in Yeon-Sang Ho. I was confident that he would make a great film from the very beginning. He also has the ability to make actors laugh, so that created a comfortable atmosphere.

You’ve been in the industry for a while now and explored a lot. What excites you nowadays?

I look at the forest, not a lone tree.

Exactly. If there’s a forest and the view looks great, I’m happy to explore it.