The English actor on vulnerability, trust, and his leading role in this year’s Palme d’Or winner—Triangle of Sadness. 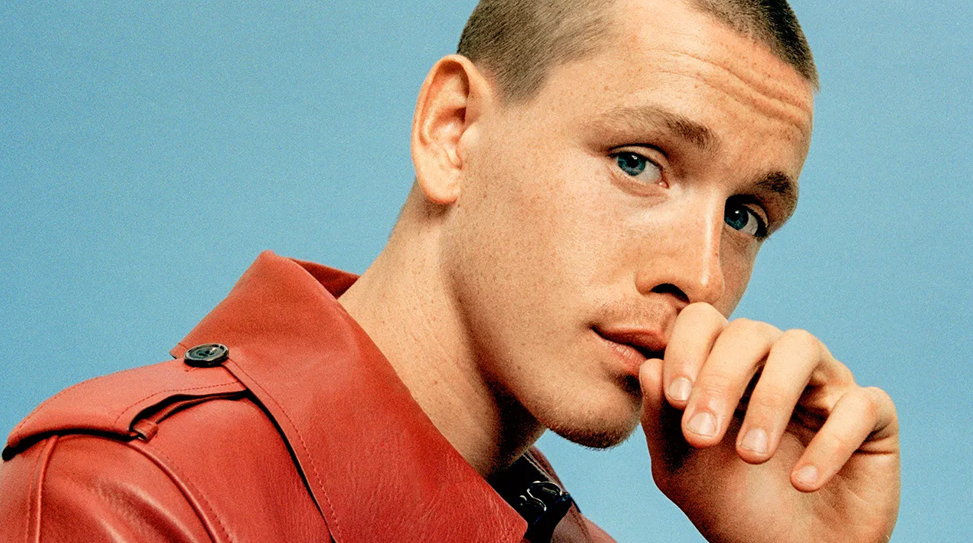 I’m quite a pensive person anyway. I don’t think I have to dig too deep to allow myself to be vulnerable.

After scoring the top prize in the Un Certain Regard sidebar at the 2014 Cannes Film Festival with Force Majeure and the Palme d’Or with The Square in the festival’s main competition in 2017, Ruben Östlund returned to the Croisette this year—and to outlining the geometry of human folly—with his sixth narrative feature, Triangle of Sadness. The film went on to secure the Swede his second Palme d’Or, placing him in the rarified company of only six others who boast double wins.

Triangle of Sadness kicks things off in the willfully superficial world of high fashion, inside an audition, where a casting director suggests that models get Botox to address their “triangle of sadness,” the frowny zone just above the eyebrows that signal age and piled-on stress. One model who might consider treating his undesirable shape is Carl (Harris Dickinson), for whom age is becoming an issue—being on the wrong side of 20, he has reason to worry—and money, or lack thereof. Income is a sore subject for Carl, especially in his dealings with Yaya (Charlbi Dean), his model and influencer girlfriend. After all, she brings home three times what he does, as is normal in their industry. They can barely split the bill at a fancy restaurant without calling gender politics into question—heck, their entire relationship. Perhaps to mollify Carl, Yaya takes him aboard a luxury yacht cruise. It’s all expenses paid, of course, in exchange for Yaya’s influencer updates.

At sea, the couple are rare objects of beauty amidst a grotesque display of wealth—Carl and Yaya are “poor” by comparison—rolling with a compendium of arms dealers, predatory business owners, and a slimy Russian fertilizer tycoon. Elsewhere on deck, the yacht’s alcoholic captain, Thomas (Woody Harrelson), locks himself away for a drinking binge. Once the captain’s dinner rolls around, things inexorably head towards farcical disaster. Bad seafood meets stormy weather, and the ship turns into a floating puke and poop party. And in this maritime hell, why wouldn’t a group of unidentified pirates show up? Soon, a subset of the yacht’s passengers have washed up on a desert island, where it turns out the only person with any practical survival skills—namely, cooking and fishing—is Abigail (Dolly de Leon), the yacht’s toilet cleaner. Now, in her newly minted position as leader in a makeshift society, she claims the island as her personal fiefdom, taking what little shelter there is for herself and extracting sexual favors from her chosen darlings. Here, a Rolex is worth zero, but some alone time with Carl is a bargaining chip for pretzel sticks.

Triangle of Sadness arrives in theaters on October 7th.

I’m remembering my conversation with Ruben [Östlund] from 2017. The Square was about to be released in the States, and Triangle of Sadness was very much on his mind already. He had known that it would require a long casting process. When did this come into your orbit?

I think I auditioned in 2018? Then we waited for the film to be fully financed, which took a while. We were actually wondering whether it was gonna happen. So it was one of those things that was in my slate, but I was unsure what would happen. I was so keen for it to be my next project. When I auditioned with Ruben, he read all the other parts, and very well. Then we met with a lot of other actors for different roles. But I still hadn’t found out if I was gonna be Carl. Eventually, while we were in New York, Ruben said, “I’d like you to be Carl, if that’s okay.” I was like, “Of course.”

A detail he shared with me that’s obviously absent is Carl going bald. What happened?

[laughs] Yeah, we discussed that and we tried it. Ultimately, Ruben wanted to go with what’s natural. Otherwise, it would end up being a prosthetics job. He didn’t want to go into that world. I’m fortunate I’m not balding right now, and I fully respected his decision to move away from it.

I was actually sad to lose that element of it because I think it said something about him. Not because being bald means you’re gonna act a certain way, but because, in the context of being a young model in fashion, it’s a certain element that further informs a vulnerability. I mean, a lot of things evolved in the script. A lot of things changed and got moved around. Ruben’s very free in how he works. There was so much stuff that ended up either changing or getting cut out.

Clearly, leaving that detail behind didn’t make this role any less vulnerable for you to play. I understand you watched Ruben’s previous films prior to the audition. Did seeing Claes Bang in The Square and Johannes Bah Kuhnke before him in Force Majeure—men put in a series of very awkward situations—give you early insight into what you might be mining?

Yeah, I knew that his work was interrogative of the male psyche. I think it was inevitable that we were gonna go to those places. And I think I was prepared to be vulnerable with it.

You got a big taste of that in your role in Beach Rats as well, and that came super early in your career. Is it an attractive challenge to be vulnerable? Is that a stimulating factor?

I mean, I think I’m quite a pensive person anyway. I don’t think I have to dig too deep to allow myself to be vulnerable. [laughs] It is tougher to do it in a film setting. It’s always a weird challenge when you come onto a project and you have to sort of humiliate yourself, or bare a part of yourself that is personal or uncomfortable. That’s always a weird thing in our work. But I think there’s a way to do it that feels true and authentic without actually tearing yourself apart.

Ruben is the only example I have of a director doing a countdown of remaining takes on set—literally hitting a gong—to create a pressurized environment. I mean, I get it. He’s chasing excellence. But I can’t help but wonder how certain actors might react to such a method.

I loved it. I thought it was instrumental in creating a certain environment on set. There was a real focus that was harnessed in those moments with the gong and the countdowns. I found it very helpful and very useful to my performance and my focus. Something I can struggle with is blocking everything going on outside of the takes, and that was a real centering thing that linked everyone. So that moment before takes became, like, sacred. To be quiet, focused, and allow the scene to take place. And that doesn’t always happen, you know? Sometimes there’s chatter and phones going off and people having a little chinwag next to the camera or whatever.

He’s very forthright about his methods, too, which I’m sure his collaborators appreciate. On The Square, I know he went as far as to tell his actors that he was aiming for that film to get accepted into the official competition at Cannes—while making it. He thought it would really benefit the work, because it would intrigue actors. Did he do that on Triangle of Sadness?

I think it’s admirable, though. You want to achieve the highest possible thing in your work. I rate it.

When do you trust directors? Do you maybe trust outright because that’s the way forward?

Up next, you have Retreat and The Iron Claw. I don’t know if you made this connection, but Sundance 2011 was hugely important for Sean Durkin, Zal Batmanglij, and Brit Marling. They all broke out together with Martha Marcy May Marlene and Another Earth. I’ll never forget that year—it was electric. I bring this up because, when I saw that you were working with them, it became clear you have impeccable taste and real intent behind your choices.

Thank you. That’s nice of you to say. I’m just lucky, man. I’m lucky that I’ve been fortunate enough to get to work with these people. That’s all I can say. If I’m a fan of someone’s work and I get to be involved in their next thing… I mean, that’s kind of the goal, isn’t it? That’s the dream.

In the past, you’ve spoken about growing up with just one Odeon, a multiplex, nearby. Now you have this pulse on the best of cinema. I’m curious—how do you know what you know?

How do I know what I know? [laughs] I just love cinema. I love film and always have, long before even wanting to be an actor. I think if you love cinema and you want to work in it, you wanna work in good cinema. I’ve always been very passionate about working with good British independent directors and I’ve been lucky to do that, and same with American directors and international directors. Separate from my involvement, I just wanna watch good stuff. Like everyone, I have my own taste so I have my own journey with cinema and my own exploration of it. But I think the people that know what’s good will all sort of share that opinion, you know? It can differ and there’s films we might not agree on, but normally, we can all kind of agree on what’s great, right?

I saw The Hollywood Reporter article where you recall your manager telling you to be “more happy” when you weren’t as fired up about getting the Indie Spirit nomination for Beach Rats. I figured that you were protecting yourself by “keeping it level,” as you said. Are you getting better at celebrating your successes now, or will there always be a discomfort?

I’m getting better at celebrating successes. I used to do this thing—I still do it—as a means of protection. I think I’ve had it since I was a kid. It’s like, life is gonna give you the great things sometimes, but it’s also gonna give you the downs. And so, in order to protect yourself from those extreme downs, I feel like you should never go too high. Because otherwise, the fall down is far too painful. I mean, I don’t think I’m ever jumping on tables anyway. [laughs] But I’m very happy. I’m celebrating. Any chance I get, I’ll enjoy my life and celebrate. So I’m getting better at it.