A never-before-seen chat with the visionary about the MPAA, our “revolting” reality TV world, and cinema’s spiritual function. 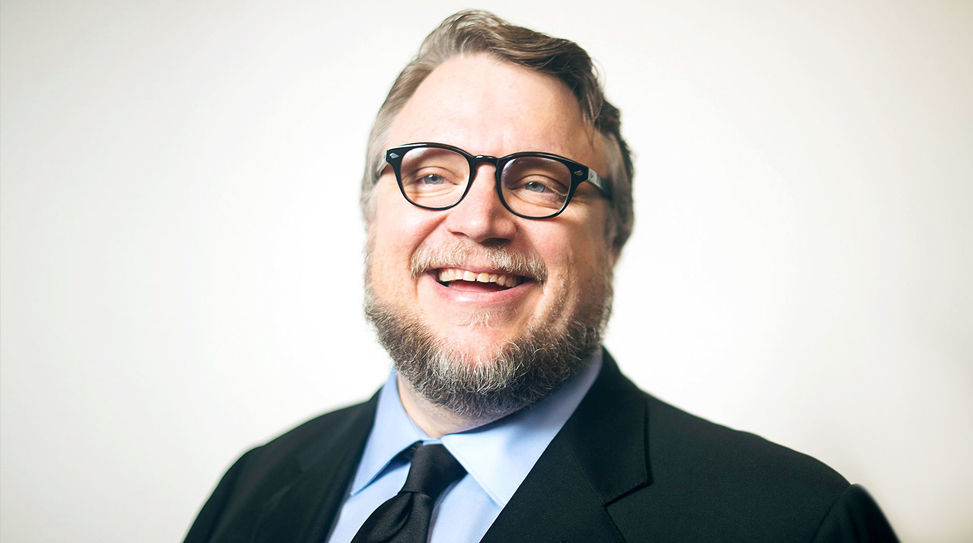 Fantasy has the power of enshrining things because it remains unexplainable to us and remains above us. Storytelling serves a hugely important spiritual function.

You could argue that Guillermo del Toro has been making Beauty and the Beast for some time now—not counting the time he was attached to direct this year’s live-action film starring Emma Watson—in which female protagonists fall for, or are courted by, literal and metaphorical monsters alike: Mimic (1997), Pan’s Labyrinth (2006), and Hellboy I and Hellboy II (2004 and 2008, respectively). Incidentally, when probed by Anthem about his favorite horror movies of all-time, the Mexican filmmaker instinctively singled out Beauty and the Beast, the 1946 French film by Jean Cocteau.

You could also argue that The Shape of Water, of that same tradition, is del Toro’s best American movie. This fairytale shadows Elisa Esposito (Sally Hawkins), a mute and mousy woman who works the janitorial night shift at the Occam Aerospace Research Center. Set in Cold War-era Baltimore, the facility is home to a mysterious new asset: a humanoid-amphibious creature of some kind. Under the watchful eye of Colonel Richard Strickland (Michael Shannon), the unnamed Slip ‘N Slide (Doug Jones) becomes an object of curiosity for Elisa, and eventually, that of romance.

As we prepare to do a deep-dive into our coverage of the International Film Festival & Awards Macao, it seems important to highlight del Toro’s new effort, which has noticeably fallen back in the Oscar race as the likes of Lady Bird, The Post, and Call Me By Your Name dominates the conversation. The Shape of Water is part of the festival’s Special Presentation line-up. Also, living up to its mission of promoting a cultural exchange, Macao will screen Johnnie To and Wai Ka Fai’s Mad Detective (2007) in its Crossfire sidebar, selected by del Toro himself to meet that end.

Anthem dug up a very telling joint-interview with del Toro and Katie Holmes from our dusty archives to mark the occasion, which we’re sharing with readers for the very first time online.

[Editor’s Note: The following interview was conducted on August 10, 2011 in New York City.]

Guillermo del Toro (as producer) and Katie Holmes join forces with Troy Nixey’s Don’t Be Afraid of the Dark, a remake of the 1973 TV film that follows Sally (Bailee Madison), a young girl who moves to Rhode Island to live with her father (Guy Pearce) and his new girlfriend (Holmes) in their 19th century mansion. It’s not long before Sally begins to hear voices coming from their basement—belonging to ancient and malicious creatures that are known to feast on the teeth of children.

Can we talk about the R-rating that the MPAA gave this movie? It’s so under-the-skin creepy, but the R seems a little bit far-fetched. Were you okay with that?

Guillermo del Toro: Ideally, I would’ve loved it to be PG-13, but when you’re faced with the decision of preserving the movie with honor, you’d rather stay with the R.

What did they want you to cut?

Guillermo: They wanted us to change the whole movie! [Laughs] We shot the movie carefully with no profanity, sex, and all of that. It’s not graphic at all. There’s not a single moment where you see anything gory. They thought it was just too intense, especially when there’s a child in the movie. But they also said something really nice, which was, “Why ruin a perfectly fine R-rated movie?” That was very nice coming from them. We wore it as a badge of honor.

Katie, did you have fun playing opposite these hoards of little bastards?

Guillermo: Are you talking about the studio executives now? [Laughs]

Katie Holmes: I had seen what they would look like, so I had that in my mind. But I was working opposite pieces of tape! What’s great is that I wasn’t playing a character that was running from them—I was fighting them. The challenge was swatting them and punching them, making sure that you were doing it at the right time.

Guillermo, did you ever consider keeping the audience in the dark about what these creatures actually look like?

Guillermo: Well, we do for the longest time. But the thing I loved most about the original was the creatures. It’s a poker game—all horror movies are. At a certain point, you have to show your hand because you can’t get away with bluffing the whole time. There’s a point where you go, “Four queens.” It was important to find the strongest point in which to make that reveal. I very clearly had the idea of having an under-the-sheets moment. I used to read books under the covers and thought, “What if she goes under the covers and it becomes this long journey?” If that’s not an effective reveal, I don’t know what is.

What sort of influence do you think horror movies have on society?

Guillermo: I think it’s a primordial thing. I’ve been quoted many times, for many years, talking about storytelling. I think it’s the primary function of making us higher human beings. The thing that scares me most is that we live in a reality TV world that debases everything to the most brutally and merciless materialistic level that’s really revolting. If that’s all we are, I want to get out of this show, frankly. What some people don’t realize is that we are spiritual beings because we think, we invent, and we cipher the world in symbols in order to understand it and apprehend it. We have lost a lot of storytelling that holds mystery—the mystery of what it means to be a human being. There’s nothing that holds the mystery of being human more than fantasy, in both it’s darkest and lightest aspects. Fantasy has the power of enshrining things because it remains unexplainable to us and remains above us. Storytelling serves a hugely important spiritual function.

What are female protagonists the symbol of in the horror genre to you?

Guillermo: In the horror genre, if you go with the “scream queen” mentality, you create victims. But some of the greatest roles go to female actors in horror movies, like Mia Farrow in Rosemary’s Baby, Nicole Kidman in The Others, and Belén Rueda in The Orphanage. This genre can create some of the most powerful female characters for any actor. Reinforcing or creating victims—female characters that are just waiting to be rescued—seems almost immoral to me. In all of my films, even the most commercial ones, I carefully try to avoid creating weak female characters.

Katie: And not only are these strong female characters, you become so invested in these women. They’re so real and normal. Mia Farrow is moving into her apartment and it’s like you suddenly become that person before the weird stuff starts happening. I looked at this script and wanted to find as many things that were human.

Guillermo: If you watch Ellen Burstyn in The Exorcist, what’s wonderful is that you can substitute demonic possession with cancer and you would still play the same movie. It’s the anguish of a mother going to the doctor and asking, “How can I save my child?” I think that’s when you find the greater horror movies. When you set it in a weird environment with weird people, it can only become a guilty pleasure for people like myself.

What are your favorite horror movies?

Guillermo: When DVDs first came out, I made a solemn promise to my wife that I was only going to get my 10 favorite movies. But now I have 7,000, so my favorite movies are 7,000. [Laughs] Instinctively, I would pick Frankenstein, Bride of Frankenstein, Charlie Chaplin’s City of Lights, Taxi Driver, Blade Runner, and Beauty and the Beast by Cocteau. I would say everything by Chaplin. It’s almost impossible to make this list. It’s a horrible dilemma. I’m going to regret these choices tomorrow, so I’ll call you back.

Katie: How about favorite movies this week? I’d say Notorious and It Happened One Night.

Guillermo: Notorious is a masterpiece.