Garlanded with prizes from film festivals around the world, the Portuguese boy wonder’s Tabu is an odd affair, and a masterpiece. 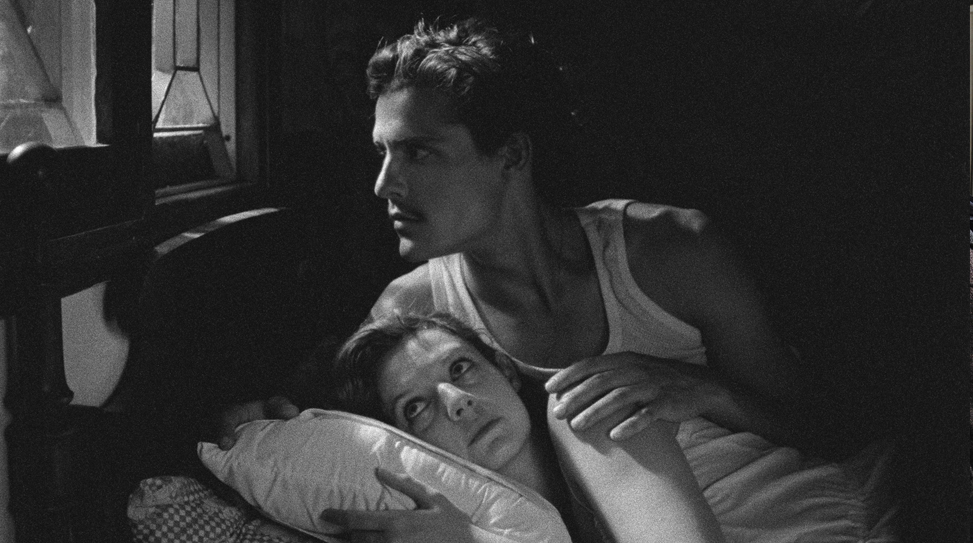 As viewers, we're lonely in front of the screen. We're lonely when it comes to our personal taste, sensibility, sense of humor, references—the world inside of us that is our own.

Miguel Gomes’ diverse catalogue of films makes him a tough director to pin down. His visual aesthetic (down to the choice of film stock), reference points and storytelling methods all appear to change from title to title. Yet the Portuguese filmmaker’s eagerness to pilot stories through various strata of perception—reality, dreams, memories and fantasy—is perhaps the all-important thread that gives some cohesiveness to his eccentric oeuvre. Not surprisingly, Gomes’ latest film Tabu is divided into two distinct chapters where it switches from realism to fantasia, from waking life to dream, from the banal to the exotic, the modern to the archaic, and from 35mm to 16mm. Gomes’ has some unmistakable cinephile tendencies—he was once a film critic—but he’s never supercilious in his approach. With Tabu, a monochrome masterpiece, we’re witnessing the beginnings of a true auteur.

Initially, we’re introduced to the harried home life of the do-gooding Pilar (Teresa Madruga) as her desperate attempts at self-purification are constantly stymied by the intrusions of her batty elderly neighbor, the fallen grande dame Aurora (Laura Soveral). Her nonsensical blatherings are ignored by both Pilar and her long-suffering housemaid, Santa (Isabel Muñoz Cardoso). On her deathbed, Aurora reveals the name and address of a mysterious local man, Ventura, and as Pilar and Santa sit in the atrium of a tropical-themed shopping center, he regales them with a fanciful tale of heartbreak and loss that occurred fifty years prior on the picturesque savannah of a fictional African state at the foot of a fictitious mountain called Tabu. Technically profound in its admiration for classical cinema, Tabu is claiming hearts at every festival lucky enough to have it. This should go unmissed.

Tabu will open in New York City at Film Forum on December 26.

How did you find your very distinct voice as a filmmaker? What have influenced you?

Lots of things. Even before becoming a film critic, I started out by watching films. We’re always viewers first. That seems so long ago now because I was a film critic from 1996 to 2000. I got the opportunity to make my first short film because they provide funding in Portugal, which is common in most European countries. I was considered a very severe film critic who hated everything. They wanted me to go make a movie so I could see how difficult it is to actually do it. When I took that opportunity, I made a bad film. [Laughs] No one took notice of my film so I just continued to do it. In terms of my influences, I’m quite attached to the American classics and people like [Vincente] Minnelli, Jerry Lewis, John Ford and Howard Hawks. They made films that are very important to me. I’ve also been influenced by global filmmakers from [F.W.] Murnau to [Jean-Luc] Godard. I can assure you that when I’m making a film I’m not thinking about other films. If you do that, you’re going to miss out on the awesome things right in front of you. I think I’m at peace with cinema, meaning that I have memory of lots of films, but I don’t remember very specific things about any particular one. I can’t quote films or have precise recollections of everything that I’ve seen.

The films have started to bleed into one another.

I have a general sensation of seeing films by Nicolas Roy, Fritz Lang and [Alfred] Hitchcock. They’ve been digested even if I’m unable to pull this particular scene from this particular film, which is an advantage in my mind. I don’t like films that reference other films. I think that’s in poor taste. There’s a connection between what I’m doing and the films I’ve seen, but it’s not at the level of making direct references. For example, it’s a vague memory of how characters spoke back then that I inject into my films. It’s so ingrained in me that I don’t think about it when I do it.

Maybe you don’t have to worry about investors breathing down your neck when you get public funding, but I wonder how much creative freedom that actually means.

We have an advantage because we don’t suffer from the pressure of money. I don’t think it’s like this anywhere else except in Hollywood and Bollywood perhaps. When you’re making a film for a large audience, you have the potential to make a profit. It’s a profitable business for certain places. The source of funding is different from country to country be it a German, Spanish or Portuguese film. In Portugal, the budgets for films are two to three times lower than a Spanish film and maybe four times lower than a French film. We make very few films every year. We make eight to ten feature films a year, which is almost nothing. The only advantage is that we’re afforded a certain freedom. No one is expecting us to make big hits at the box office, so we can make personal films. We hope that the films will interest audiences, but we’re not obliged to make something that will make a lot of money.

Tabu premiered at the Berlin Film Festival and now it’s here in New York. How important are festivals when it comes to getting these smaller art house films out into the world?

I look at it in a very practical way. This is my third feature film. Nobody saw my first film. It was released with one print in France and with two or three in Portugal. It didn’t get into many festivals. My second film played at some festivals, but it wasn’t released theatrically except for maybe six or seven countries. But in comparison to my first film, the second one was much bigger. With Tabu, we’re taking it to festivals all around the world. I could travel an entire year with this film without returning to Portugal, which I don’t want to do. I think that’s the problem with a lot of film directors. My friend, who’s a director himself, told me that you start to make shitty films when you travel too much. Tabu is going be distributed to more than forty countries and it’s a record in Portuguese cinema. I’m glad that it might be interesting to so many people in different parts of the world, from Australia to Japan. One thing is clear: It’s always easier to make your next film if you get recognition for your previous work. I think that’s the most important thing to consider if you want to continue working. In Tabu, there’s a scene in the cinema where Pilar, a catholic woman, and a painter are watching a movie together. We don’t show you what they’re watching, but you hear the Phil Spector song playing in the background. The painter has actually fallen asleep while Pilar is crying because she’s very moved by the movie. This happens in every movie theater around the world because people react differently to every film. As viewers, we’re lonely in front of the screen. We’re lonely when it comes to our personal taste, sensibility, sense of humor, references—the world inside of us that is our own. For that reason, you can’t measure the success of a film solely based on statistics and numbers. If there’s a single person who loves a film so much that they remember it twenty years on, you’ve accomplished something. That’s something you can’t measure.

Your films can get quite self-reflexive. Why was that important with Tabu in particular?

I can give you an example. The second segment of Tabu is narrated by a character who appears at the end of the first segment. The second story is his past, which took place fifty years ago. Similar to when someone tries to recall something that long ago in real life, you can’t remember things as precisely as you want to. I took advantage of that truth and eliminated all of the dialogue from the second segment. It was also a way to challenge the tools of cinema without copying the aesthetics of silent films. What I wanted to achieve was to recreate the sensation of watching silent films.

The principle of duality is seen throughout the entire film, most evidently in the way you decided to create two segments. What is your fascination with that?

I think that the film captures things that have now all but disappeared in cinema. In the times of Murnau and silent films in general, it was very common to have a system of oppositions. Murnau would put the countryside against a city, day against night… There were these very simple oppositions put into play. My first inclination was to create that kind of oppositions. The first segment of Tabu has old people and youth in the second part. You have ordinary life without much excitement put against a very cinematic world with people hunting and singing pop songs. Like we talked about, you have lots of dialogue in the first part and no dialogue in the second. In the case of the character Pilar, she’s very aware of the world. She knows that society is crumbling around her. In the second part, the characters seem totally unaware, politically and socially, of what’s going on around them. They’re just having fun living their lives like it’s a Hollywood film. I designed my film around these kinds of oppositions. I wanted the viewers to be able to make sense of the first part only after having seen the second. You only understand Pilar’s guilt after having seen the second part. Pilar is the embodiment of guilt and holds our entire society on her shoulders. She represents our history and our failures. Even world leaders can’t put the world together, so how can she do it? She tries. With this film, it’s like seeing someone with a hangover before you see them drinking.