Off the Rack: Giovanni Bonamy

The former Abercrombie & Fitch model on being a dude in the fashion industry, in a series inspired by model-turned-activist Sara Ziff. 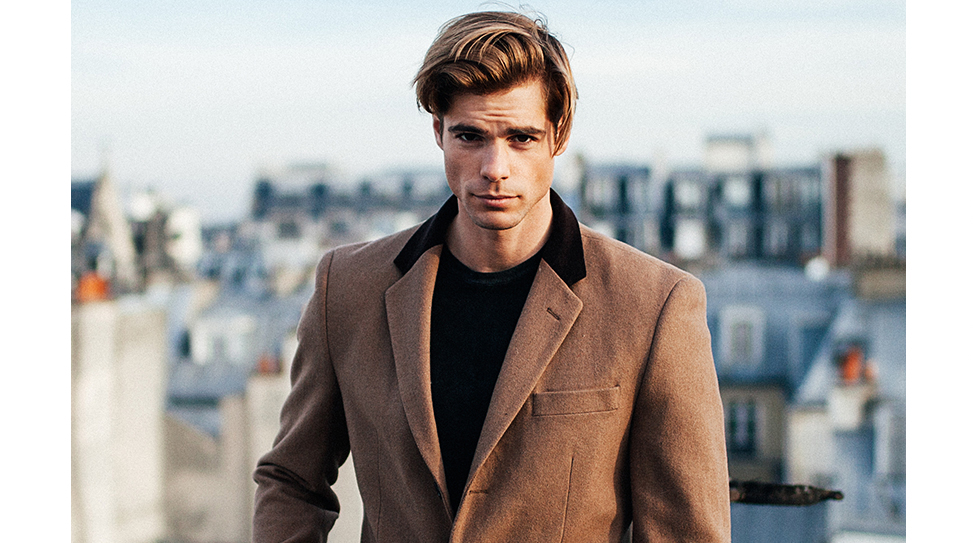 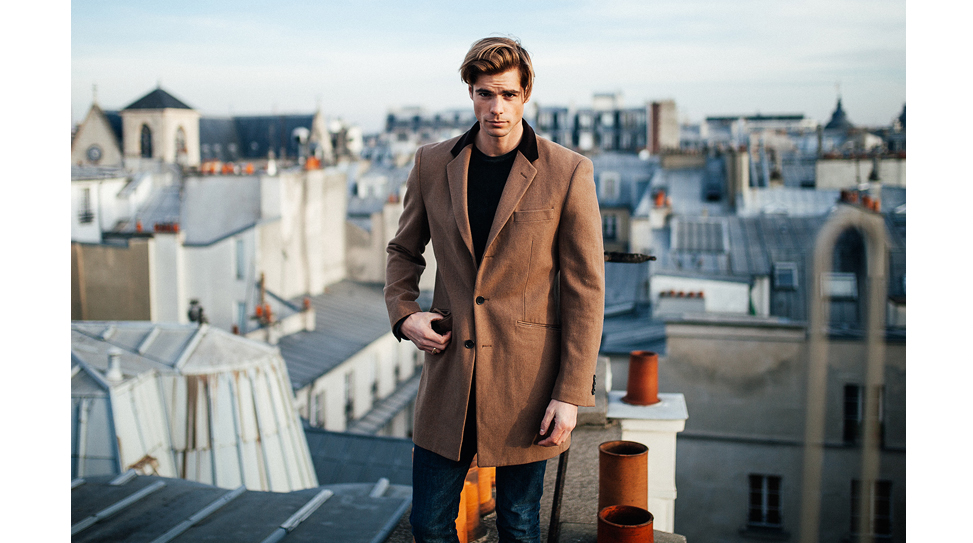 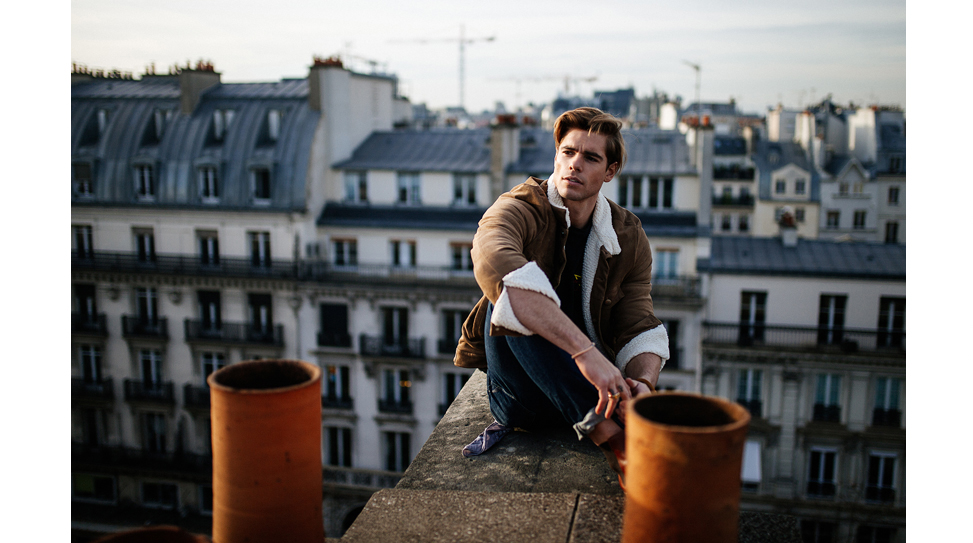 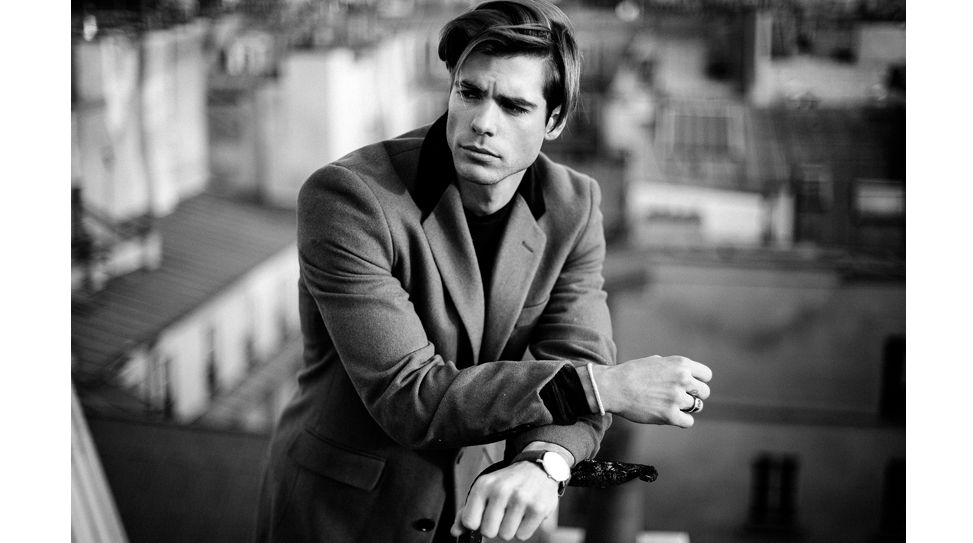 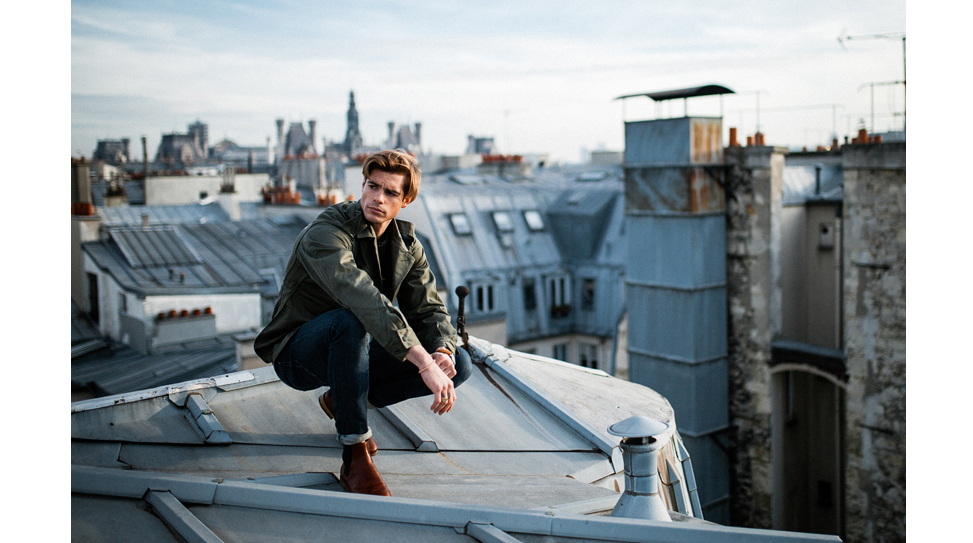 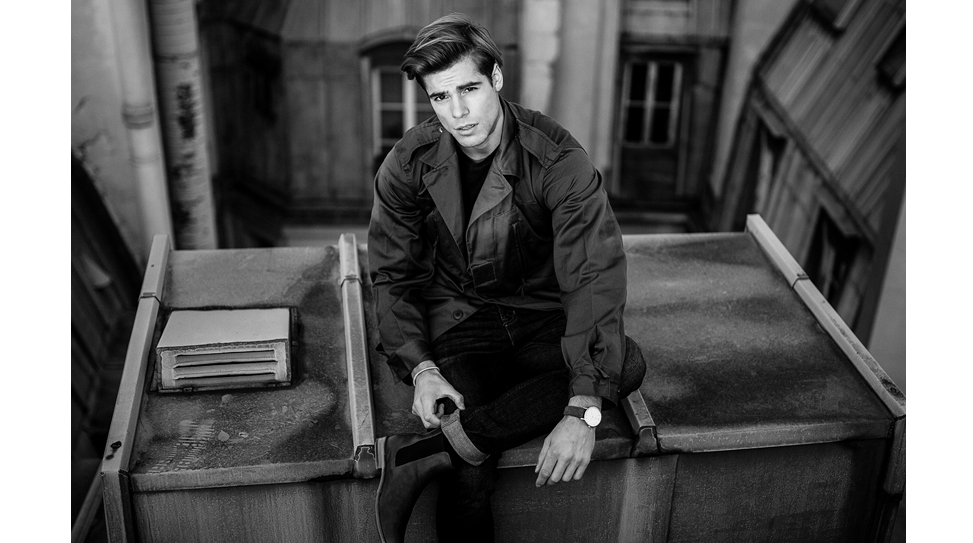 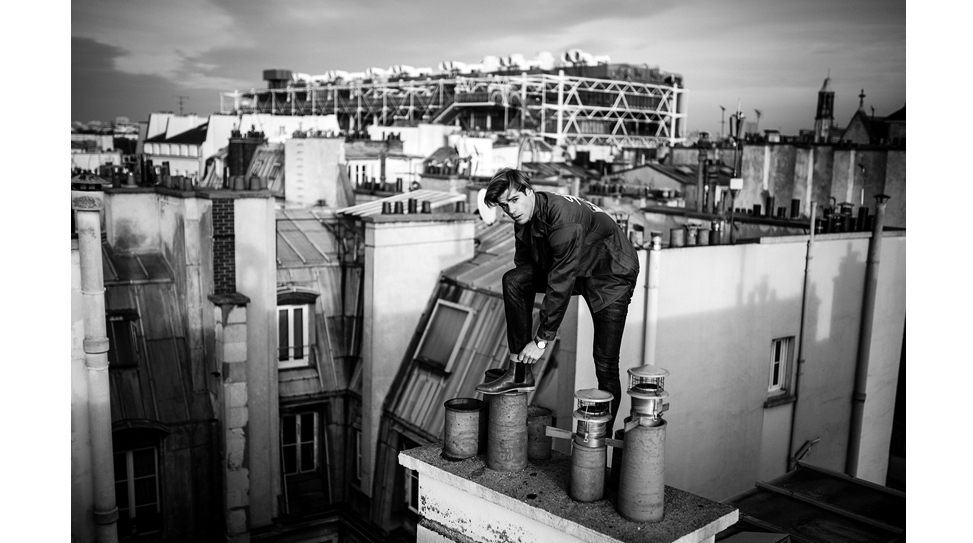 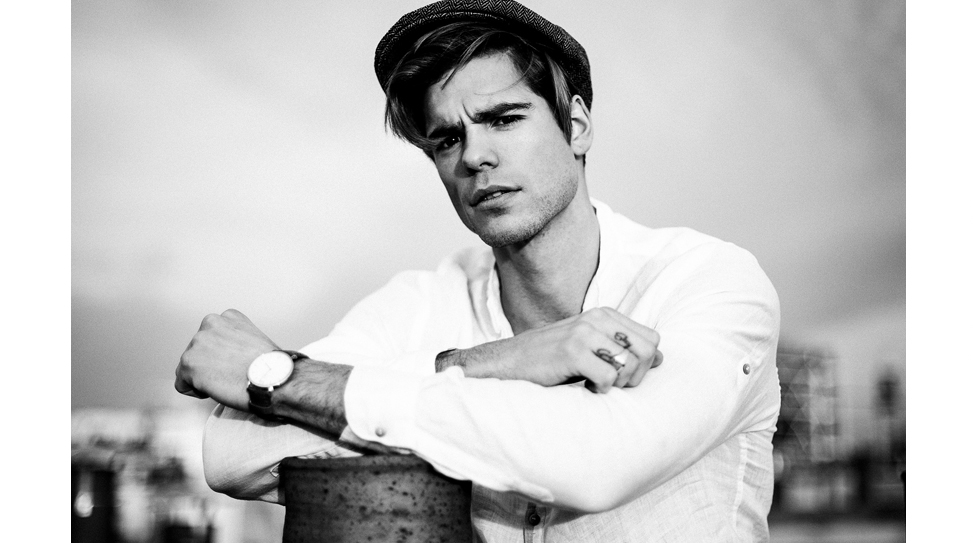 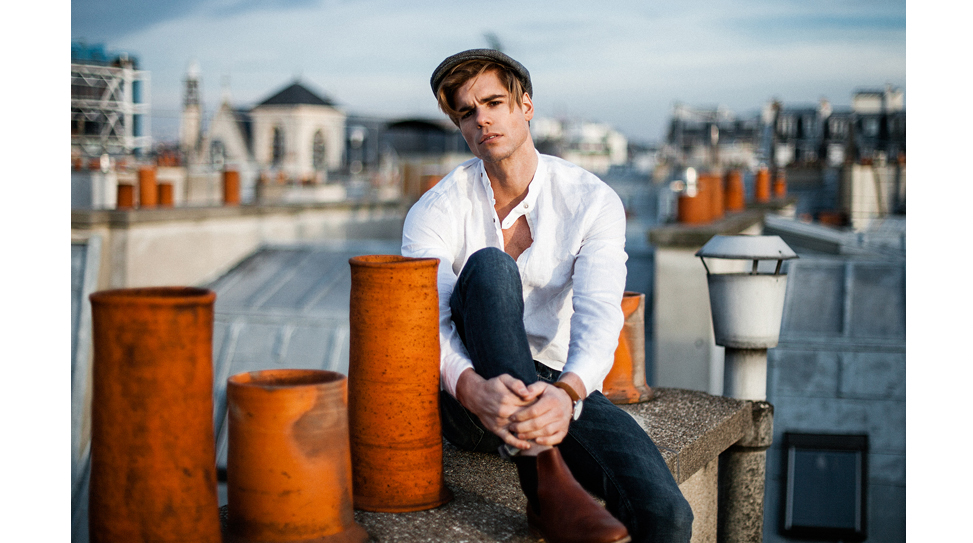 In Paris, they like skinny and young faces. I'm almost 'fat' for the fashion industry and not that young anymore. But I like the fact that I'm not like them.

Off the Rack is a new series of intimate portrait sessions, accompanied by thoughtful exchanges with the models found therein front and center. The idea behind this started taking shape in 2009 when we sat down with model-turned-activist Sara Ziff for an in-depth interview. At the time, Ziff was scaling back on her modeling career in order to focus on her political science studies at Columbia University, and to promote her documentary, Picture Me, a strong exposé on the fashion world’s increasing demand for adolescent models, cases of sexual abuse, and rampant drug use.

Ziff broached a touchy subject during our chat, which would become the harbinger for this series: “Male models have it a lot harder, actually. They’re treated like second-class citizens because women tend to care a lot more about their appearance. There’s obviously much more of an industry for the female models as a result, so male models don’t get paid anything like what the female models get paid. I’ve been curious to talk to some male models. A lot of the people in the business are obviously gay men and I’d say that most of the male models are straight men. Sometimes they might take sexy pictures… I just think it might be a little bit harder for the male models. People might not appreciate just how insular this industry is and how hard it is to get people to open up.”

Off the Rack is a platform for the often looked at yet rarely listened to. When you’re in constant earshot of, “Not enough ribcage,” you’re bound to have grievances that need airing out. For this first edition, we reached out to our friend Giovanni Bonamy in Paris. Here’s a quick rundown of the happy-go-lucky 26-year-old gent: He was discovered while on his way to apply for a job at a local supermarket. He’s popular on social media with more than 300,000 Instagram followers. He launched his own brand of clothing called Gioboy. He supposedly has little interest in fashion.

Happy New Year, Gio! How did you celebrate?

My friends and I rented a Parisian bar in the 11th district. It’s a lovely place to enjoy and to celebrate beginning on New Year’s Eve—as it was intended! [Laughs] It was a night of drinking.

You’re based in Paris these days, right? How much of your time is spent traveling?

I spend about six months each year in Paris. The rest of the time, I’m around the U.S. and Europe.

What’s your favorite city in the world?

I really have no idea… I’ve been to so many incredible countries. I couldn’t pick one over another.

What new city would you most like to visit next?

I would really love to go to India to see what life is like there.

How were you first discovered?

After two years as a shirtless model and participating in new store openings of Abercrombie & Fitch around the world, I dedicated my career to fashion when the few people pushed me to do it.

How old were you then?

How old are you now?

You come from a family of firefighters and that’s what you were intending to do before modeling came into your life as I understand. Can you imagine yourself as a firefighter now?

Not anymore. I’ve really changed over the years and now I have a lifestyle that I couldn’t have if I was a fireman. But I’m still really passionate about this job, and really respectful.

What was the learning curve like when you first started modeling? Was it difficult?

It was difficult. People—photographers, agencies—always repeated, “You’re too commercial. You’ll never do any fashion things.” So, at first, I traveled to China and Turkey because they’re a “second market.” It was the best way to get some cool, first commercials and fashion pictures.

I read that your dad pushed you to go find a job so you wouldn’t be a freeloader living at home. Then you came home with an offer to start modeling. How did he react to that?

As always, he told me, “You can do anything you want—if you do it well!”

I would guess that most people that you meet in the industry—designers, casting directors, photographers—are professional. How often do you find that they’re not so nice?

Most of the time, they’re really friendly. It all depends on how you are. I’m always full of energy and I just wanna shoot in a good atmosphere. But sometimes they are stressful because of the time crunch—or others reasons—so I just let them do their thing. And when it’s my turn, I do my best!

This is something that Sara Ziff joked about when I interviewed her: What is considered “old” these days in modeling? Are models getting younger and younger?

I’m getting old next to some others… In Paris, they like skinny and young faces. I’m almost “fat” for the fashion industry and not that young anymore. But I like the fact that I’m not like them.

What are the biggest misconceptions about the fashion industry in your opinion?

I really don’t know what to say! [Laughs]

Well, what are the biggest misconceptions about models. I mean, male models, in particular.

I think it’s, “Models are all the same with a crazy diet, every day at the gym, and nothing in the brain.” Most of us travel a lot, learn, and see things that most other people will never experience.

You’re not so much into fashion and interested in things like travel and building a personal brand. You started a clothing line called Gioboy. What do you hope to achieve in ten years?

I like that I can travel the world and organize my agenda with my manager Billy [Frederic Richard]. Fashion is more my business than my world. Billy and I created my brand two years ago with some Gioboy caps. In ten years, I still see myself in this kind of world—more as a French actor or a public person. I have so many desires, but they’re definitely rooted in the arts.

You have over 300,000 followers on Instagram. Does that open up a lot of doors?

Yes, it does! I have a manager who works on my social media inquiries. I have a lot of jobs as a model thanks to my followers. Today, I really don’t need an agency in France anymore because people know me and know where to contact me. But I’m still with an agency at the moment.

Are male models treated differently than female models? Are the top earners female?

What’s one of the biggest lessons that you’ve learned so far working as a model?

Just be who you wanna be! And keep it simple! When I see all of these girls or male models thinking that they’re genius, I’m just laughing because, like I said, I’m not proud of being one of those thousands of models. This is only the beginning of something different for me.

Can you tell me about a time when you had to, or wanted to, turn down a job?

My manager refuses a lot of inquiries. I’ll let you guess that about a lot of photographers, even big names, but they’ve tried to shoot me naked. I always turn that down, of course. [Laughs]

There are often discussions about eating disorders, sexual harassment—for example, gay photographers taking advantage of straight male models—and drug abuse in the fashion industry. How much of that have you seen first-hand? Is it real?

They tried to when I was a new face, like they always do. But they quickly saw that it would never work with me. Do the right thing, and in the good way. Maybe one day you’ll be proud of yourself.

What have been your favorite shows, campaigns or photoshoots to date, and why?

The Dsquared2 show in Milan in my pink underwear—that got big buzz! L’Oreal TVC worldwide with Eva Longoria in New York City. The V magazine shoot with Bruce Weber in Miami.

How much of your life is structured by diet and exercise? Is it difficult to manage?

I never had to diet. I try very hard to eat as healthy as possible, but my bad habit is red wine.

Do you think you’ll ever leave modeling behind?

In a few years, I guess. Maybe I have three to four more years as a model. My ultimate life goal is to have a wife with two little kids in a beautiful house in Paris, close to my family and my friends.