First the facts: Francesca Woodman is one of the great “never-was” of the late 20th century photography, having found posthumous fame like so many ill-fated visionaries in the annals of art history. Fearless, vulnerable, eloquent, childlike, and a bevy more conflicting adjectives describes the then 22-year-old RISD graduate whose growing body of work (many of […] 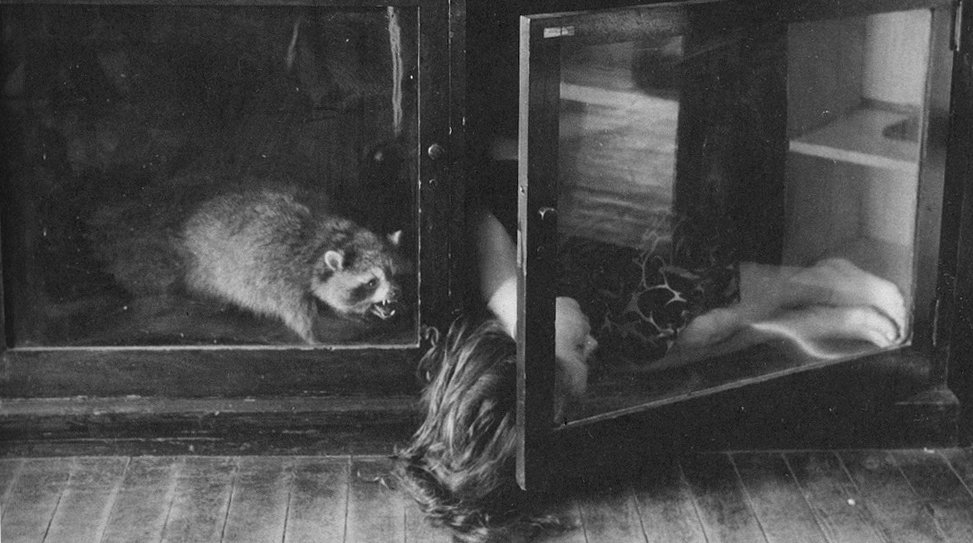 First the facts: Francesca Woodman is one of the great “never-was” of the late 20th century photography, having found posthumous fame like so many ill-fated visionaries in the annals of art history. Fearless, vulnerable, eloquent, childlike, and a bevy more conflicting adjectives describes the then 22-year-old RISD graduate whose growing body of work (many of them nude self-portraits) was cut short when she leapt to her death from the window of her New York studio in 1981.

She’s the central subject in C. Scott Willis’ incredibly intimate documentary, The Woodmans, which beautifully interweaves the wildly talented image-maker’s work (including experimental videos and fabled diary scribblings that served as an extension of her photography) with the astute observations made by her still-grieving parents, Betty and George Woodman, three decades on.

Anthem spoke to Willis, a journalist and documentary filmmaker best known for producing Nightline at the height of its success, about the film via Skype.

The Woodmans will receive a 2-week engagement in New York at Film Forum starting January 19.

Were you familiar with Francesca’s work before embarking on this film?

I wasn’t at all familiar with it. I only found out about her after speaking with Betty and George at a party in New York. They happened to ask me about my life and my work, and my daughter happened to be studying photography at RISD. And when we put the connection together, I said, “Maybe my daughter could meet your daughter.” I made one of those social gaffs that you tend to regret, but I don’t regret it now. [Laughs] Betty and George didn’t talk about Francesca in those very off-the-cuff conversations, but they were extremely generous when we started talking about the possibility of shooting a documentary.

When did you realize there was enough material for a full-blown documentary?

When I finally got around to seeing Francesca’s work, I was astonished. When I put Betty and George’s story, their work, Francesca’s story, and her work together, the film became obvious. Betty, George, and I had long conversations prior to shooting. When I finally asked them, “Would you think about doing a documentary?” they told me other people had approached them before and they had always declined. I was interested in telling the story of not just Francesca, but the whole family because if it just centered on her, it would be this short and sad story. It was way more interesting to me to look at the entire context of her life with her family. Betty, George, and I saw each other on-and-off for about 3 years. They once asked me, ‘Why do you think we should make this film?’ and my answer to them was, “If it was me, I wouldn’t do it.” But they agreed to do it.

It must take a lot of courage to revisit such a traumatic experience so fully. Do you think making this documentary might have been therapeutic for Betty and George as well in a certain way?

If it’s therapeutic for them, I don’t think it’s something that they would want to repeat. It must be extremely difficult to go back to the details of all of that. Also, I think it’s also very tough for them to be known more for Francesca’s work and not their own art. It’s definitely a tough film for them to see. Unless you’re a public figure, seeing your life writ large on screen is very difficult to take in. Betty and George, perhaps more so than Charlie [their son], are used to publicity; Betty had monographs published about her and she had a great show at the Metropolitan Museum. But it’s not like she had seen her life writ large quite like this. The toughest part about doing this film was, in many respects, screening it for them at the end.

They’re so incredibly candid in their interviews. Was anything off-limits?

There wasn’t anything that I couldn’t ask, but I always told them they could refuse to answer. They always had an option of saying, ‘I don’t want to talk about that.’ That was something that we all agreed on at the very beginning. You studied film, right?

I don’t mean to get into a super technical conversation, but in the film, there’s one interview where Betty and George are looking off-screen, and for the rest of the interviews they’re looking straight into the camera. I wanted them to have that sort of confessional relationship to the lens where there’s no intermediary between them and the audience. In order to conduct the interviews that way, I would sit behind them and ask the questions. Some of the most candid interviews actually came when Neil Barrett, the producer and cinematographer of the film, shot Betty and George in Italy. The filming took place in a room that was sort of dark and Neil was buried behind the camera. I think creating a setting like that where they have no one to make eye contact with but themselves made room for a lot of extraordinary candor.

In the film, Betty talks about how she often has the urge to blame herself for what happened to Francesca. Having gotten to know her well over the years, do you think that guilt mainly comes from not having done more to help alleviate Francesca’s unhappiness, or does it maybe also have something to do with the fact that she unwittingly passed down her propensity for the arts to her daughter? Even George at one point admits, “There’s a psychic risk in being an artist and that may have made life more difficult for [Francesca].”

That’s an interesting question. I think the guilt naturally comes from being a parent and losing a child. The guilt being, ‘Why couldn’t I have stopped or prevented that?’ In terms of passing down their inclination for the arts, one thing that became very clear to me over time while reading Francesca’s journals is this: art was very much therapeutic to her. It was really good for her and she took a lot of value out of that. It was when she wasn’t making art that the downward spiral started. So, it wasn’t the oppressiveness of making art or not succeeding in her career as an artist that did her in, it’s when she stopped making art that she lost that cornerstone of her life. In questioning whether Betty and George might have passed on this ethical or physical construction of being an artist and aspiring for a higher aesthetic ideal, I think that was something that was always in Francesca’s corner. It wasn’t something that she fought against.

But people have often questioned whether Francesca’s sadness is projected, or her suicide foreshadowed, in her photography, haven’t they?

I’m going to push up against that a little bit because I think art was really a healing tool in Francesca’s life. There were private things going on in her head that really hurt her and maybe being an artist masked her symptoms a little bit. When you’re an artist, you’re allowed to be a little bit crazy. I’m trying to make this a short answer for you, but it’s tough. As a filmmaker, I really had a vision of illustrating this story in a particular way. I tried to find out as much as I could and frame that story in a very particular way. I definitely didn’t want to form any kind of conclusion; I wanted the audience to consider these biographies and really think about them in a meaningful way. When you watch The Cove, you really want to save these mammals, but there are no mammals to save in this film. It’s a consideration of people’s lives.

As you started getting to know the Woodmans better over the course of filming, did it become more difficult to ask the hard questions or did it perhaps get easier having established a bond?

I come from a journalism background more so than film and I still consider myself a journalist, in fact. So, my commitment to the story was to pursue a truth in the best way that I can find it. The tough part really isn’t asking the hard questions because I think people appreciate honest questions. The tough part comes when you suddenly think that you want to shield the truth a little bit so that no one’s feelings are hurt. I think the filmmaker’s relationship with the audience is a bond that has to be stronger than the filmmaker’s relationship with their subjects. You have to show truth to the audience and sometimes that comes at the expense of the subjects.

The film was crowned the Best New York Documentary at Tribeca last year. What was your festival experience like?

I’m so used to doing television, which means that you screen your piece for 3-4 million people, but the result of that is nowhere near close to sitting in a room with 300-400 people watching the same piece. That experience of being in the theater was, firstly, really remarkable because you can actually see where you’re connecting with viewers and where you aren’t connecting. Secondly, talking to the people who stuck around after the Q&A and having them tell me how touched they were because they lost a family member or because it spoke to their life experience was enormously gratifying. Later on, at the Rome Film Festival where the film had its international premiere, a bunch of RISD students who were in the honors program in Rome came to the screening and told my niece, ‘Our heads are spinning because we’re working so hard, but we saw the movie and it makes us want to get back into our studios. Francesca is a real icon for us.’ So that’s where you go, “Wow. I couldn’t have connected with an audience in a more meaningful way.”