The acclaimed French filmmaker on working with mother-daughter duo Catherine Deneuve and Chiara Mastroianni on Beloved, the pitfalls of the musical genre, and wanting to be poor again. 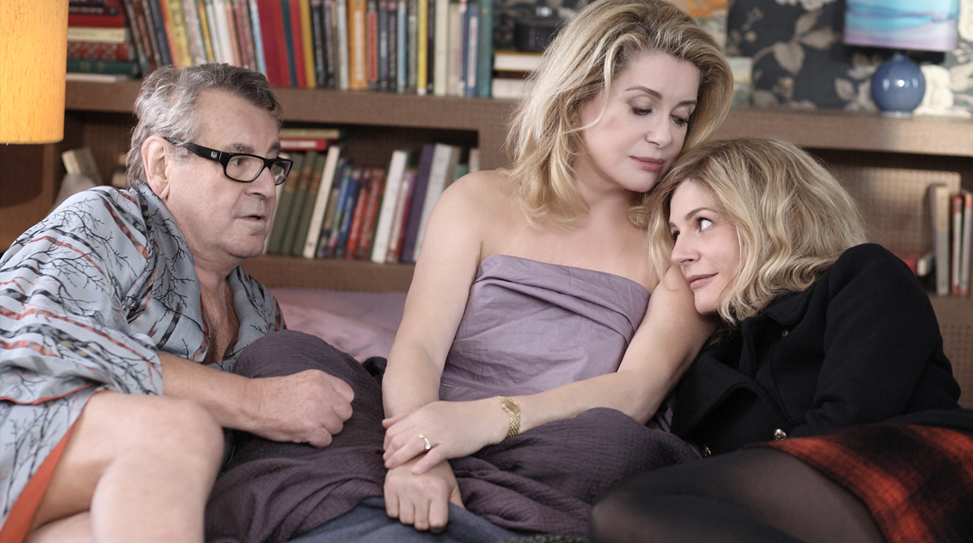 What I learned from making this film is that the type of films I want to continue to make and the kind of working structure that I want to create necessitates complete freedom. I want to be poor again.

Christophe Honoré is a prolific French filmmaker. French critics have propped the helmer-scriber up as the heir to French New Wave Cinema. He made a career writing and/or directing intimate dramas about families in crisis. From a title character testing his familial bond by announcing that he’s HIV+ in Tout contre Léo to a mother forming an obsession with her son’s best friend after her child dies in a car accident, grief is an undeniably important aspect in Honoré’s work. In Love Songs, a bereft man whose girlfriend suddenly dies finds comfort and love in a young man.

Honoré’s latest effort—a return to the postmodern musical turf he first explored with Love Songs—is Beloved (Les Bien-Aimés), the closing night selection at the 2011 Cannes Film Festival. The melancholy-tinged narrative races through four decades of sociopolitical turmoil from 1964 to 2007 (the 1968 Soviet invasion of Czechoslovakia, the specter of AIDS during the 80s and the horrors of 9/11) and pan-European locations (Prague, Paris, London and Montreal), which is propelled by a mother and daughter running up against their misadventures in love—Catherine Deneuve and Chiara Mastroianni plays mother and daughter, as they are in real life.

Beloved is now playing at the Lincoln Plaza Cinema and Sunshine Cinema in New York City.

How did you get your start? Did you study film formally?

I didn’t attend film school. I come from a little village in a French province called Brittany. It’s the kind of village where if you’re fifteen and you say that you want to become a filmmaker they kind of laugh at you. When it’s your family they don’t want to laugh in front of you, but behind your back, they think you’re chasing some sort of a fantasy. So I wound up studying literature. Then I went to Paris and started writing children’s books. Then I was able to get into Les Cahiers du Cinéma, which was a very good learning experience. Then I started publishing adult novels. After that, I wrote scripts for other people and one day, a producer asked me if I wanted to write scripts for myself, and I did. I’m telling you this in two minutes, but it took ten years for this to happen.

There’s certainly no formula when you’re trying to become a filmmaker.

During my adolescence, I was influenced by the fact that people like [Jacques] Demy and [Francois] Truffaut had been film journalists prior to becoming filmmakers. There’s this feeling in France that before filmmakers become filmmakers, they were first and foremost cinephiles. When you talk about other people’s films, you’re already heading toward making your own films. But I think I’m probably part of the last generation of directors who get into filmmaking through being a cinephile first. I can see that young people think they’re going to become filmmakers by making ads and music videos, and not through the passage of being cinephiles themselves.

I think a lot of aspiring filmmakers are in fact cinephiles, but they sometimes get caught up in making references to their favorite movies and iconic filmmakers in their own work.

The idea of making references to other movies is always tricky—it can be dangerous. People think they need to show these references in a way that’s similar to how you show your papers at customs. It’s like, “This is how I will gain entry into this country, this film club.” For me, references have nothing to do with that. I make movies by answering to other people’s movies. It could be current filmmakers that I love or it could be for things I dislike that I want to respond to. Or it’s references to filmmakers in the past where I’m picking up on ideas that someone inseminated forty years ago. Something that people accept very readily in painting is that painters always work in terms of the painters that preceded them. What’s sort of a scuttlebutt in cinema is this thought that each film should be a reinvention of what came before, this immaculate conception where you’re reinventing the wheel each time. That’s an idea that seems to persist in film circles.

With Beloved, a narrative that spans 45 years, how did you go about structuring it in terms of the events that occur and the things you wanted to highlight with the characters?

I structured it very much like a novel. I wanted it to be Romanesque. I tried to show things in the different periods without necessarily connecting them to each other. I also didn’t want to spend so much time describing each period like the 60’s or the 70’s. I don’t think it’s a film that tries to tell the larger picture, or that certainly wasn’t my intention. I wanted to connect myself to the idea of this passage of time for the characters. At the end of the film, Catherine Deneuve sings about how fast her life has gone by. It’s this feeling of how, sometimes, life is summed up by two or three moments that went by very quickly.

What’s attractive to you about musicals?

I’m not sure that “attractive” is a good word. [Laughs] It’s a lot of work! For one, you have to record the songs before the shoot. You have to direct your actors in terms of when they’re going to breakout into song and it’s always at a point during the shoot where they’re not 100% clear where or who their characters are. Adding musical sequences to a film is like putting stones in your luggage. On the other hand, rather than leaving you with an image of stones, you want these musical sequences to be very light and airy. But it is like juggling stones.

So it was difficult finding a balance between the whimsical moments and the very heartbreaking punctuations that occur in the story when you were making the film.

I’m not sure that I found a balance. [Laughs] I think it’s tough for the audience because it’s true that the film starts off in this lighthearted musical-comedy genre before shifting into a melodrama. The film gets very dark as it moves forward. It’s also getting deeper, or at least I hope it does. With the actors, I tried to maintain that airy feeling as the film progressed, but you feel the struggle when things are getting so gloomy. It’s not a very fun film in that regard. We screened the film at BAM with a post-Q&A and there were these two girls in the front row with a question: “You have no hope for love? You have no optimism?” That was their take on the film. I don’t agree with that personally because, on the contrary, I think the female characters commit all of themselves to have successful love lives. They equate the success of their lives with the success of their love lives. I don’t know if that’s pessimistic or optimistic, but it’s still beautiful and courageous to me. When you’re at the end of your life, dying, do you tell yourself that it was successful because you loved and were loved? Was my life successful because I had kids? To me, their commitment to love and admitting that their lives were successful because of it is an act of courage.

What was it like to work with Catherine and Chiara, a real life mother and daughter? How does something like that affect your role as a director?

When we were promoting the film at Cannes they were always very adamant in saying, “Why is it a problem that we’re mother and daughter?” In terms of press and all that, especially since they’re extremely protective of their private lives, they refused to make that a promotional tool. I know that as a filmmaker the scenes between Catherine and Chiara felt quite different. It was a bit strange because of their close ties. I could see in Catherine’s eyes how thrilled she was to witness her daughter’s acting. She saw how her daughter had become this fabulous actress. As for Chiara, she really takes her place as a legitimate actress in this film and I think, underneath, there was this desire in her to show her mother how well she could do it. In terms of the overall work relationship through all the difficulties, the admiration they have for each other and the complexities that exist for a mother and daughter, you’re really at the heart of the movie’s subject matter. It brings the conundrum of my generation into question: how do we make it work after sexual liberation, the French New Wave, and after all these things? How do we continue and do something of value?

The concept of money. [Laughs] This was the first time where I had a little bit more to make a movie with. I had no money before, so I didn’t know that I didn’t have enough until making this film. That feeling of frustration was new to me. This time I had more money, so I could feel the lack of it. That doesn’t work for me so well. I don’t like it because then, of course, the producers and the people that give you the money feel like they have you’re word and there’s more pressure when it comes to their demands. It was the first time where I had to make concessions, notably when we were editing the film. I’m not sure that I managed all of that very well. What I learned from making this film is that the type of films I want to continue to make and the kind of working structure that I want to create necessitates complete freedom. I want to be poor again.