The star of Trade of Innocents discusses his breakout role in My Best Friend’s Wedding, his first trip to Asia and his love for those chase sequences in The Bourne Legacy. 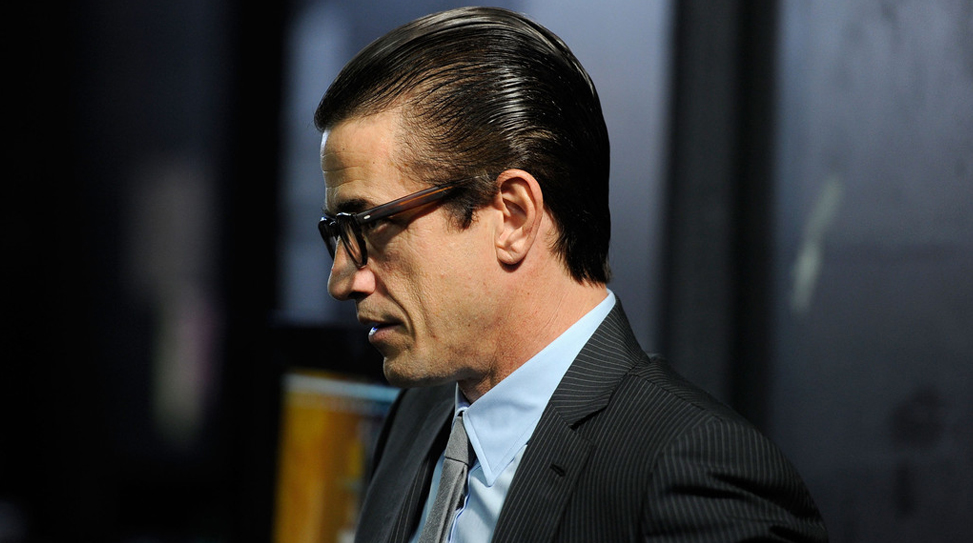 The Bolthouse family—Bill and Laurie Bolthouse served as the executive producers—made this happen out of their concern for the people of the world.

There’s something about Dermot Mulroney. If not his looks, it’s his overwhelming charisma. If not his enthusiasm, it’s the fact that he’s always quick to laugh. Now 48 years old—noticeably well preserved for his age—the Virginia-bred actor has played the object of desire opposite the likes of Julia Roberts in My Best Friend’s Wedding, Jennifer Aniston on Friends, Debra Messing in The Wedding Date, and more recently, Zooey Deschanel on the hit TV show New Girl. With his latest film, Trade of Innocents, Mulroney tackles an important and less lighthearted subject matter.

In 2007, Bill and Laurie Bolthouse traveled to Phnom Penh, Cambodia. Bill, a family physician, had volunteered to travel for a non-profit that was sending specialty surgical teams to the area. During their stay, the family hosted a dinner for an anti-trafficking team and 7 young girls who had been recently rescued from a brothel. The evening proved momentous and the Bolthouse family went away feeling deeply angry that such an atrocity as sex slavery existed in the world. In 2009, the family connected with filmmaker Christopher Bessette to discuss the possibility of making a movie together. Their shared goal was not only to make a compelling film about a difficult subject matter, but also to raise awareness about human trafficking and move people to action.

In Bessette’s Trade of Innocents, which takes place in the back streets of a tourist town in Southeast Asia, Dermot plays Alex, a human trafficking investigator. Alex and his wife Claire (Mira Sorvino) are still dealing with the grief of losing their child years earlier. Through their struggle, Alex and Claire find themselves intertwined with the lives of local neighborhood girls in Cambodia, whose freedom and dignity are threatened on a daily basis.

Anthem caught up with Dermot to discuss his latest offering, his first trip to Asia, and his many forthcoming projects.

How’s everything going? What have you been up to?

I’m doing pretty good! I had a nice weekend with the family and I’m going back to work in a couple of weeks for a terrific new project.

I’ll be joining the cast of August: Osage County, a play that John Wells is directing. It also stars, believe or not, Meryl Streep, Julia Roberts, Chris Cooper and Juliette Lewis. It’s an incredible cast.

We’ve remained friends over the years and I couldn’t be looking forward to this more than I already am.

I still remember you most as Michael from My Best Friend’s Wedding. That movie left a big impression on me when I first watched it.

[Laughs] That movie has become it’s own status symbol in a way to be honest with you. It was such a great project to have been involved with. I revisited that maybe 2 years ago and I was blown away by how terrific that movie is. It’s funny, smart and kind of not what you expect. The girl doesn’t get the guy… Can you believe it?

It still holds up. How did you get into acting by the way? Did you pursue it or did it all happen by chance?

I did act in elementary school and high school. When I went to college, I didn’t major in theater or acting, but I was in a couple of plays. I was doing it, but I never thought I’d be able to do it as a profession. That seemed like a ridiculous notion, right? I wound up taking film classes at Northwestern and thought I might become a cameraman maybe, just in case if acting didn’t pan out. I was definitely pursuing acting. A talent scout from Hollywood—they don’t do this anymore—came to my university and auditioned students that were graduating. I was discovered by the William Morris Agency in 1985 before I graduated from college. I started work the January of 1986 and suddenly, I was a lead in a TV movie, which was unbelievable.

How has your perspective on the industry changed since you first started out?

More than ever, your facility to be fluid is so important. I’m working harder now in being an actor more than ever before. It’s weird. So much has changed in terms of where people see movies and how many movies of yours they have now seen. It’s becoming more of an issue. It’s a bizarre and ever-changing thing. For instance, I’ve now done sitcom work, which I never imagined doing before. I had a blast and it got a great response though. I’m not trying to discredit the work, but I never thought of doing it because that’s just how my motor was running.

These were momentous roles. You had a guest starring role on Friends and you were more recently on New Girl. How would you compare TV to film work?

With film, the amount of time that you have with a rolling camera has gotten so small that it’s very much the same as TV nowadays. It used to be that television was what was shot so fast. The economy has dictated that feature films are now being shot just as fast as TV shows. There just isn’t the time or the money nowadays, so you’re just getting a couple of takes even on the big budget films.

How did you get involved with Trade of Innocents? It seems like a very personal project.

Everyone involved in the film has brought their heart and soul into it. I hadn’t known much about the issue that’s addressed in the film to be honest with you. But I read the script and looked the issue right away. I was blown away by human trafficking and child sex slavery in the world. The other thing that’s amazing is how many people are out there trying to make a difference. The Bolthouse family—Bill and Laurie Bolthouse served as the executive producers—made this happen out of their concern for the people of the world. Everyone shared that in the making of this movie.

I was in northern British Columbia shooting The Grey in 35 degree below zero weather before coming onto this movie. It was just days later that I was in Bangkok making Trade of Innocents. It was a hit the ground running sort of experience. I think you get that feeling of urgency when you watch the film because the way that we shot it was just as grueling as it appears on film.

And you have children of your own. I’m sure the material had so much more impact on you because of that.

Exactly. You can’t even begin to fathom these lives to ours, but what I was able to do was meet one of these investigatrors who had gone in with hidden cameras—I was seeing footage from a shirt-buttoned camera—to take the girls out of dire situations. You end up having this out of body experience because you’re comparing your life to what’s happening and yourself in those circumstances, not just as an actor but as a human being. This film gives you the impression that I’m a pedophile myself, I think, if that comes across. To me, that’s a twist on a turn on a twist that’s totally unexpected.

What was it like to shoot in Bangkok? What were your first impressions of the city?

I was really impressed by it. That was actually my very first trip to Asia and I was thrilled. I had never seen anything like Bangkok. It’s a thriving mess. It’s beautiful and weird at the same time. [Laughs] We shot in neighborhoods that you really can’t imagine. I had an experience of a lifetime over there.

Did it complicate things when you were shooting, the fact that you were in a different country with not much foundation to support an American film crew?

One of the things that amazes me most about this film is the final sequence that takes place at a temple like Angkor Wat in Cambodia. That entire structure you see was a set piece. It’s kind of incredible because most of it was carved out of styrofoam, and then painted and molded together. You couldn’t even fit a full-sized Hollywood crew into some of the locations that we shot in. For the two locations I’m thinking about in particular, the quarters were so cramped. By the way, you know the new Bourne Identity movie that just came out? I’m sorry, but I don’t remember the right title.

Right! Oh man… There was some chase footage in it—through the Philippines, I think—that was unbelievable. It reminded me of shooting a film in a crowded Asian city and they nailed it on that one. If you haven’t seen it, you should go watch it.

I haven’t seen it yet.

Kee, come on! There’s this unbelievable bike chase through Manila. You have to see it.

You make time in your busy schedule to watch movies.

I had some free time on location away from my family on Trade of Innocents and I was 100 yards from a movie theater. On my one free weekend there, I manage to see 4 movies. I was especially looking forward to seeing The Bourne Legacy though.

How did you bond with Mira Sorvino on this particular production? Did you have a chance to get familiar with each other prior to the shoot?

We didn’t get to do that at all before the shoot because I was coming straight off of The Grey and I know Mira was coming off of another job herself. We basically shook hands and started shooting. Mira and I hit it off right away. We bonded quickly and just got to work.

What can you reveal about Stoker, which Park Chan-Wook is directing?

I think he’s an incredible director. I haven’t seen the finished film, but for what it’s worth, the script was phenomenal. My role is pretty small in that one, so I guess I’m answering your question by not revealing anything. [Laughs]

You have so many other cool projects coming out. What can you reveal about the Steve Jobs movie?

That I finished a few weeks ago and I really enjoyed it working on it. I think they’re really onto something with that movie. Did you pull Ashton [Kutcher] up on the computer?

It’s scary how much he resembles Steve Jobs in those photos.

I know! I couldn’t believe it. I took that job right away. It was really fun to learn about that part of our history, which I think spans around 25 years in the movie. It’s almost like a Greek tragedy how everything plays out.

And you’re reuniting with Mira on Space Warriors. What stage of production is that one in?

That’s an independent movie for kids. I honestly finished that movie like 4 days ago. I get a little break now and then I go to Oklahoma for August: Osage County.