The up-and-comer on his Staten Island roots, the thing about television and playing Mickey Cohen in Frank Darabont’s Mob City. 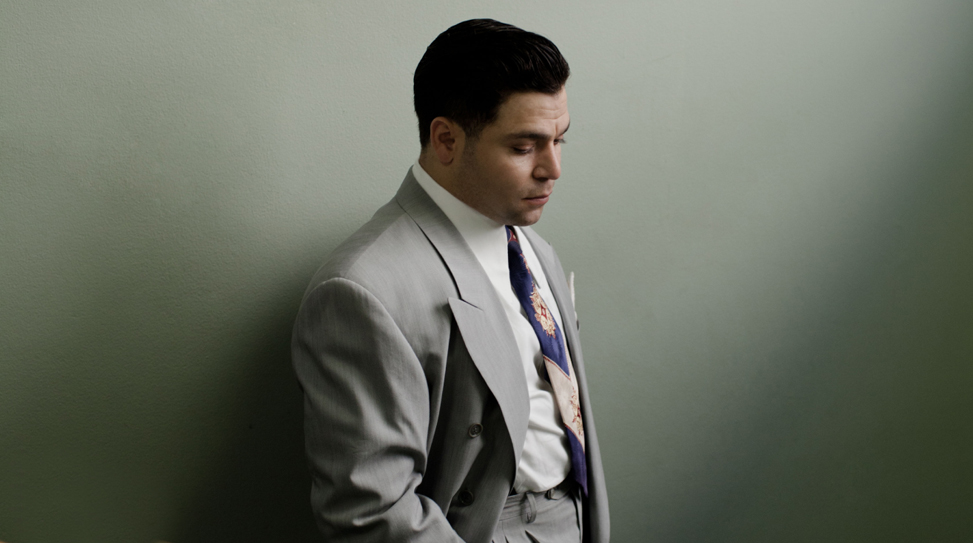 If you’ve ever wondered what Mickey Cohen was really like, Jeremy Luke, the latest actor to bring the notorious mob boss to life on the small screen, will tell you: “My take on Mickey is that he actually enjoyed being around people and hosting the night club every night. He liked shaking everyone’s hand even though he had a really bad bout of OCD. He wasn’t the sharpest tool in the shed, but he was constantly trying to better himself.”

Born in Staten Island, the 36-year-old got his start playing bit roles on some of the biggest TV shows, including Bones, CSI: New York, ER, Desperate Housewives and Hawaii Five-O. Before acting, Luke was a successful night club promoter in his hometown. “I wasn’t happy,” he explains. “I was working all the time. I was working until 4 or 5 in the morning. The people I had to deal with weren’t my kind of people, so I started making movies with my video camera as an outlet.”

Having recently appeared in the Sundance hit Don Jon playing Joseph Gordon-Levitt’s alcoholic best friend, Luke is returning to the small screen as the aforementioned Mickey Cohen in Frank Darabont’s (The Walking Dead) highly-anticipated Mob City, and Donnie in Clint Eastwood’s Jersey Boys opposite Christopher Walken and Vincent Piazza. Put this guy on your radar.

How are you doing, Jeremy?

How much did you know about Mickey Cohen going into this, if at all? Did you have to do a lot of research?

I didn’t know much about him. I’d heard about him. As soon as I got the audition, I started looking him up, even for images. Before that, I didn’t know anything. When I got the role, I was reading a lot of biographies. I knew Sean Penn had portrayed him. Halfway through the shooting season, I started making those kinds of inquiries. I made the decision to play the character way before I watched those movies.

Harvey Keitel and Paul Guilfoyle played this character as well. So do you then go back and look at what came before or is that dangerous in your process?

Since I watched those movies halfway through the season, I already knew how I was going to play the character. I discussed what my character would be like with Frank [Darabont] by that point. I already made a decision about what I would do with this role, way before watching those movies.

What did those early conversations with Frank look like regarding your character and the material? What was important for him to get across?

I only met him after I got the role. He was nice enough not to be in the room when I was auditioning. He would’ve made me very nervous. The first time that we met, we had breakfast at 9 in the morning and he told me I had to gain weight. He put all these potatoes in front of me. [Laughs] I gained like 17 pounds to play Mickey. So I would do stuff like that and show up on set. He basically wanted me to make my own choices, but molded me into what I should be for the long haul.

When you take on a character who led such a storied life, is it difficult to bottle all of that inside of you all the time?

I just did the most research I could before going into this. My take on Mickey is that he actually enjoyed being around people and hosting the night club every night. He liked shaking everyone’s hand even though he had a really bad bout of OCD. He wasn’t the sharpest tool in the shed, but he was constantly trying to better himself. I always kept that in mind, this time of his life in his early 30s. Going back to the question, I don’t try to explore other things. Frank said something really profound, which was to let the character evolve.

You’ve been a part of a long list of shows over the years. What are some of the bigger lessons that you’ve learned by working in television?

The thing is, what I’m doing right now with Mob City isn’t really “television” to be honest. This is a movie. People have a tendency to go, “Oh, this is just television.’ With this, we have Frank Darabont and that’s who we answer to. We don’t have anyone else over our shoulders. Even the quality of the show is not “television” in my opinion.

This has been said over and over, but TV is really pushing the boundaries right now. TV is where actors want to be.

Of course. Cable television is where it’s at. After awhile, people want more. They want more than just the procedural with this and that. They want to go more risqué. In terms of my character, it’s the second episode where I really push boundaries. But it’s all confined within the storyline. It’s not just about pushing the boundaries for the sake of doing it. There’s a lot of violence and smoking on this show.

Have you started shooting Jersey Boys yet? What stage of production is that in?

I actually shot that like 2 months ago. It’s in post-production right now. I got to work with Clint Eastwood. Frank Daranbont was on set and he got to meet Clint. Clint knew who he was, but I got to reintroduce him again, which was super cool.

[Laughs] He does, right? He’s actually a really nice guy. He’s old, but sharp. He’s a really sharp guy. He does one take of everything. He calls action and then it’s like, “Alright, go. That’s enough.” He’s really into what he does and he has a big smile on his face while doing it. He’s like a kid in a candy store.

He must be so sure of himself and know exactly what he wants.

Oh yeah. He has been directing for a really long time. This guy knows his shit. He knows what he needs and what he doesn’t need. He has a very loyal crew. Some of those people have been working with him for years and years and years.

So what’s the story behind your nickname Turbo?

[Laughs] Okay. That’s a nickname that I got 10 years ago. I gave it to myself when I was out one night. I got a new car at the time, a Toyota Corolla. I thought I was really hot shit and gave myself the name Turbo. It kind of stuck and it was this really cool name I had. [Laughs] I still have the same car 10 years later.

The nickname came before the show Turbo and Joey then.

Oh yeah. When Turbo and Joey came along, it was an enhanced version of ourselves.

Well, let’s talk about that webseries. How did it come about? It’s your baby.

I’ve been active for 13 years in Los Angeles, professionally. I went from 2008 to 2011 with 1 paid job. I had an agent who didn’t believe in me, who wasn’t sending me out. I had to take things into my own hands. This was in my early 30s and I just said, “Fuck it.” We started out doing stuff on my Blackberry. We didn’t know what we were doing, but we knew we were doing something great. The first episode is all about getting that [Joe] Pesci audition! The entire first season is about getting that Pesci audition.

You’re from Staten Island. At what point did you feel it necessary to move out to Los Angeles? What can you reveal about your early, early beginnings?

When I was around 19, like a lot of people, I didn’t have a lot of direction. My mother made me go to college, which was good. I dropped all of my classes except for my acting classes. [Laughs] During that time, I was running a really successful business with my best friend at the time doing night clubs. At the same time, I wasn’t happy. I was working all the time. I was working until 4 or 5 in the morning. The people I had to deal with weren’t my kind of people, so I started making movies with my video camera as an outlet. It was a therapeutic thing for me. I knew I couldn’t pursue acting in New York as a starving artist. That wasn’t going to happen because my ego was too big at that point. I moved out to California and struggled for a really long time. A really, really long time. Now I’m working with Frank Darabont! It can’t get any better than that.

It worked out really well.

He created my favorite show! He created The Walking Dead!

Were you a big fan of movies growing up? What kind of stuff were you watching?

The truth of the matter is that there’s not much culture in Staten Island. My mother is a painter and an artist, but I didn’t get much exposure to stuff outside of that. I don’t want to sound cliché, but the Robert De Niro and Joe Pesci movies… That really inspired me. When I got the role of Mickey, I remember hearing about James Gandolfini passing away and that made me so upset. I always looked up to him. And, you know, I had to gain 17 pounds for this role. My friend and I went back and watched entire seasons of The Sopranos during that period. Gandolfini was definitely an inspiration for me in playing Mickey. It was the way that he handled himself and how comfortable he was in his own skin. It was about studying what he did.

I’m always fascinated when actors have to gain or lose a lot of weight for a role. It’s quite strategic, no?

Do you have any interest in making a feature of your own? What are you interested in making if you do?

It’s funny that you bring that up because I’m on my way right now, pulling up, for a meeting with a friend. We’re making a campy horror/comedy about zombies. I like the comedy and the drama.

What should we get really excited about with Mob City?

The thing about this show is that it’s smart. It’s a smart, smart show. It’s such a cool show about the 1940s. This has never been done on television before.

Is there added pressure when you’re portraying a non-fiction character like this?

Not for me. I just try to play the humanity of it. The scariest thing for me at the beginning was that I might get fired from this job. [Laughs] At the end of the first day, Frank came up to me and said, “That’s the fucking guy.” You’ll love this show.