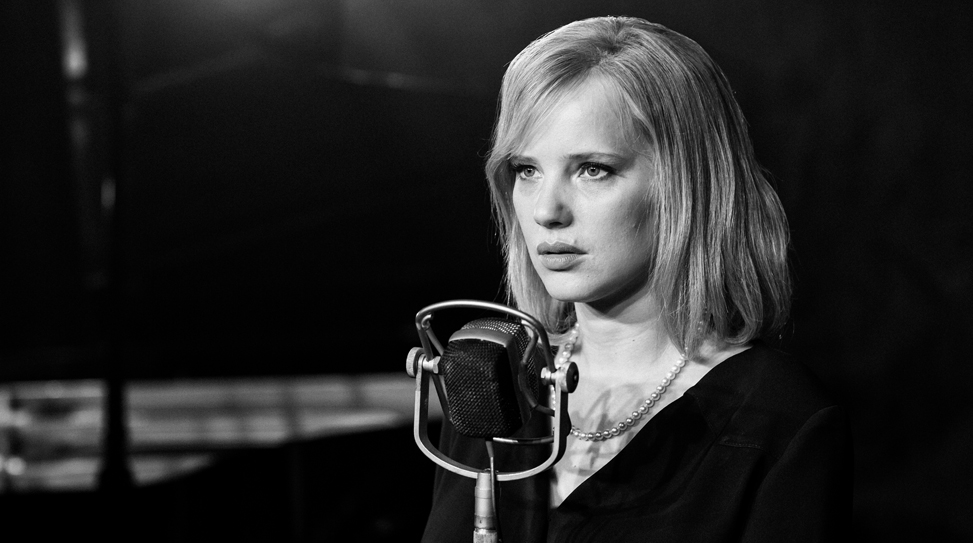 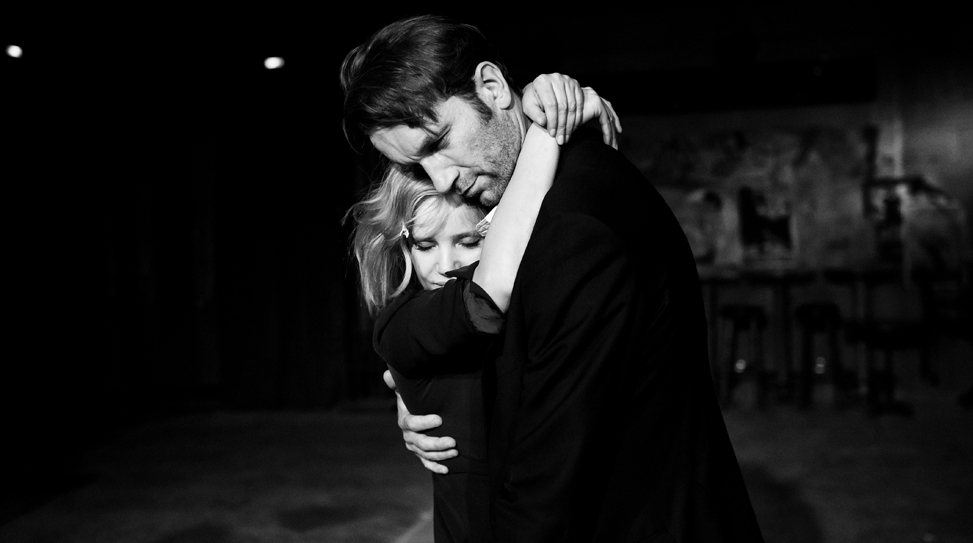 During the standing ovation I remember thinking, ‘Life is incredible. Really.’

Pawel Pawlikowski made history in 2015 when his post-war drama Ida became the first Polish film to take the Best Foreign Language Oscar. Now comes Cold War, an exquisite throwback made with a verve and lyricism that rekindles memories of the glory days of European New Wave cinema.

Poland, 1949–and the grey of communism—sets the stage for Cold War. Musical director Wiktor (Tomasz Kot) is touring the countryside scouting “peasant talent” for a new troupe of folk singers and dancers, designed as a Soviet project to showcase the authentic sounds of Poland. Wiktor, however, is less interested in championing indigenous artistry than in finding a star. His eyes light up at the sight of fierce blonde beauty Zula (Joanna Kulig). Before long, Wiktor and Zula have turned lovers, and they embark on a turbulent, decade-long romance of partings and reunions spanning both sides of the Iron Curtain. It’s a sensational journey into the human heart and all its strange compulsions, from rural Poland to the streets of East Berlin, from Paris to Yugoslavia.

Cold War’s surface whirl of fascination would not work without Kulig, a stage and TV veteran, who previously worked with Pawlikowski on The Woman in the Fifth and the aforementioned Ida. In a wonderfully fiery and mercurial performance, she is simply the definition of star quality.

Anthem met up with Kulig at the Bryant Park Hotel in New York City for a conversation.

Do you enjoy watching your movies with an audience?

For the reaction, and it’s also great for me to find distance. We shot Cold War a year and a half ago and when I saw it at Cannes for the first time, I didn’t have distance. Seeing it in New York four months after that, I had distance and I could see my character as an audience member.

Cold War is your third collaboration with Pawel [Pawlikowski], but this is your first time as the lead. I know he also wrote this part for you, which is something special.

Yes, of course. I was so happy and thankful for this part. Pawel knew me and created this part for me with the singing, acting, and dancing. It was a wonderful opportunity because I wanted to combine the three things on the stage or in a film. He knew that I have a musical background. I grew up in a small village when the folk tradition was still alive and that’s why we used it. I later studied classical music in Krakow. That’s why it was much, much easier for me to communicate with Mazowske, a huge Polish group that still exists. I spent half a year singing and dancing with them. I was once an aspiring jazz singer. I finished drama school and wanted to act. It was great for me! I remember they were casting the Wiktor part and auditioning a lot of professional musicians. That was not so easy because they could play music, but acting was difficult. Tomasz Kot was great, but he didn’t have all the experience with music. He had to learn how to conduct and play the piano. I started to see that it’s not so easy to find somebody who can do three things.

You had previously worked with Tomasz in your husband’s [Maciej Bochniak] film.

Yeah! Oh my god, what a funny couple! [Laughs] It’s true. Tomasz and I played a couple for the first time in Disco Polo and now we’re together again in a totally different style.

There’s this inescapable feeling when a filmmaker finds his muse that something is really sparking between them, which inevitably manifests itself on the screen.

Meeting Pawel for the first time was special. He said to me, “Joanna, I like it when actors have a musicality inside.” For me, that was really important because I love music. That’s why our communication is very unique. We have the same kind of intuition. Sometimes I would look at Pawel’s face and know immediately that I had to change something in my performance.

You have a shorthand.

Yes, yes, yes! With the scene at the club, we did some three-point choreography, but Pawel would also say, “Joanna, improvise!” It’s exactly like a jazz concert: there’s structure, but it’s also improvisational. I knew there were points to hit, but I felt very free doing the dance scene. Also, Pawel comes from a documentary background. That’s why he says, “If you feel at this moment that you have to do something different, you can do it!” Maybe he will use a different take, but I always felt free. [Kulig makes a sharp waving motion] That was my idea.

Even a gesture like that was memorable. I know exactly what you’re referring to.

Working with Pawel, you don’t have to be exactly the same every time. Documentarians are very sensitive to reactions. The way the film was made was meticulous, but he always wants very natural movements and feelings in the acting. That’s why we didn’t create a strict character who stays the same all the time. She’s alive.

Is it true that you almost quit acting after one of your early film experiences?

Yeah, yeah! It was like, “Jesus, I don’t know how, but I pulled it off!” [Laughs] That director also came from a documentary background and it was my first experience with that. I remember filming a scene and the camera was always on your face, right there with you. I had a lot of experience working with narrative directors, but documentarians have a different taste. They’re not as interested in acting and being in the moment with the characters as they are about reality.

At age 15, you won a Polish TV talent contest—Chance for Success.

That’s when you were aspiring to become a jazz singer?

That was the most important thing in my life. But I still went to drama school because when you do more things, you can be more open. Acting can help you with singing, and singing with acting. With the film and stage, it’s about rhythm. We don’t think about it often, but rhythm is everywhere.

The music is so paramount in Cold War. It colors the film with undeniable feeling and complexity. Again, this role feels tailor-made just for you to inhabit.

It’s really true. The music is like another character in the film. “Dwa Serduszka” is a song that tells us everything about Zula and Wiktor’s relationship. It’s about two hearts that can’t come together at the same time. It’s an old folk song that’s very original and true. It’s a song about love. People around the world say, “I like this song ‘oy, oy, oy’,” even though they don’t understand the words. The original folk musicians created this simple melody because they had something to sing about.

You’ve described Zula as half woman, half child. She had a difficult upbringing so as a grown-up, Wiktor becomes everything to her in the relationship: a lover, a father, a mentor…

There’s one line in the film where Zula says this about her father: “He mistook me for my mother so I used a knife to show him the difference.” Your childhood will come back to you, especially in your adult relationships. In the beginning we see that everything is great, but in France it falls apart. I think Zula’s past comes back to haunt her. We don’t know a lot about her family, but I think it goes back to her bad relationship with her father. She has huge trust issues. Wiktor is so great to her and so warm, but sometimes you have a problem with your personality so you “kill” the most important person in your life. When Wiktor gets close, she tries to destroy that relationship. She also has problems with nationality and doesn’t feel comfortable in France. She had a young energy and her soul was in the music in Poland. I think in the past she understood that Wiktor was the most important person in her life, but now it’s too late. She develops a drinking problem, she has sex with different guys—it’s not the cure for her relationship crisis. I think it’s a very universal story. We know that all couples experience difficulties. I think it was more difficult to work it out in the past. People read more about psychology now, but in the past they didn’t know that maybe their bad childhood is the reason for their relationship problems. If you really want to make a relationship work now, there are many more ways to do that. In the time of communism and war they’re telling you, “You can’t come back to your country!” It wasn’t so easy. Can you imagine? “You don’t have a home!” It’s such a unique story. Sometimes we hate Zula, but other times we understand that she’s a child in an adult body. She needed more time. They need to meet at the same time together. It’s a story about huge love and very difficult love. You want to help Zula, but she has a deep, destructive kind of personality. We all have this side and that side and it’s great to be balanced, but sometimes people choose to destroy everything.

What about something as specific as Pawel asking you to emulate Lauren Bacall?

It helps me because sometimes when I’m on set I’m so excited that I’m too much of my own personality. That’s why Pawel said, “Joanna, try to be Lauren Bacall.” That’s why day by day I was watching Lauren Bacall. I knew that in her movements she was very calm and elegant. When Pawel said her name, my body was different. I knew how to move and how to talk. My voice was different. I think Pawel liked the old style of acting.

I know you made a school trip to Cannes when you were 15. You returned with Cold War.

Yes! The bus trip! It’s so crazy… That was in secondary school. It was 24 hours of just traveling. It was part of the school budget so we saved up for two years because in the third class you go for two weeks to France, including Cannes. I remember putting my hand on the palais like, “I’m at Cannes.” [Laughs] That’s why when I went back with Cold War I said to Pawel, “Now I’m in a film!” you know? During the standing ovation I remember thinking, “Life is incredible. Really.”