Juliette Binoche has a range few other actresses can rival. She’s good enough to win an Oscar and embodies the kind of charismatic appeal that allows her to cross the moviegoing divide. This is certainly underscored by her most recent role in Abbas Kiarostami’s Certified Copy for which she earned the Best Actress honor at […] 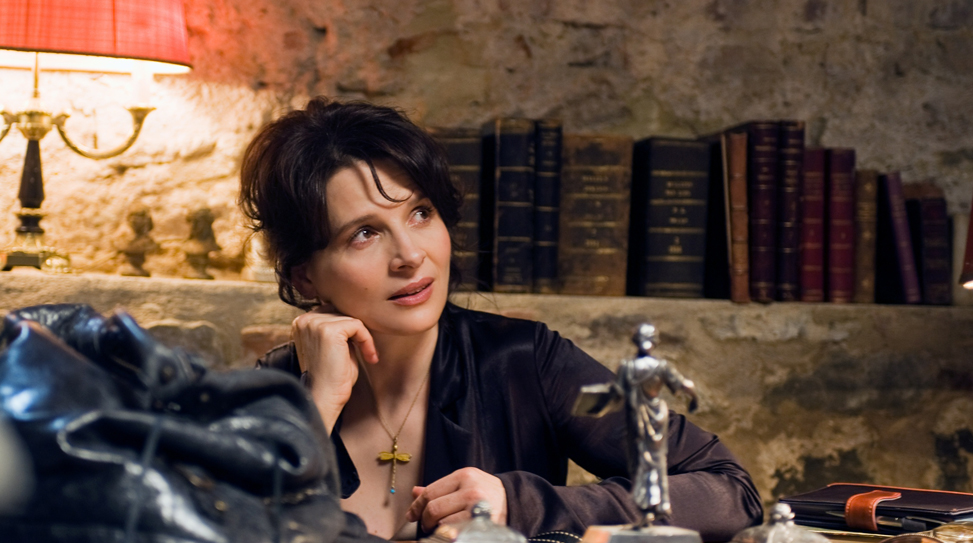 Juliette Binoche has a range few other actresses can rival. She’s good enough to win an Oscar and embodies the kind of charismatic appeal that allows her to cross the moviegoing divide. This is certainly underscored by her most recent role in Abbas Kiarostami’s Certified Copy for which she earned the Best Actress honor at Cannes last year. Now 46 years young, the French actress has accrued a formidable reputation that cannot be overstated—and she’s still very much in the game.

Certified Copy centers on the romantic entanglement between an unnamed gallery owner (Binoche) and James (William Schimell), an acclaimed author. What’s most interesting here is that, for reasons never fully explained by Kiarostami, the nature of their relationship is left ambiguous. As their getting-to-know-you banter escalates from innocent small talk to heated arguments over James’ supposed neglect of their son, we’re left wondering whether they’re two strangers playing a game of make believe or in fact a legitimate couple going on fifteen years of marriage.

Binoche has crafted a beautifully observed performance built on a steely, game-raising discipline that doesn’t rely on grandiose physical gestures or directorial pyrotechnics for emotional effect. Her subtly brilliant mannerisms, well-timed pauses and special cadence etched into every line of dialogue prove a veritable goldmine. Binoche’s expert pinning of a protagonist who wears her heart on her sleeve is to watch someone we have all been, known, dated, hated or loved.

What was it like playing opposite William Shimell, a first time actor?

It was a great experience. William impressed me from the very beginning because he knew the script by heart on the first day of rehearsals, which I’d never seen before. But, at the same time, I was wondering how he would be on set because acting isn’t just about learning the lines. Early on, Abbas told me, “You take responsibility for William’s acting,” and I was like, “Uh, Okay…” [Laughs] We had one week of rehearsals in Paris and another in Italy, and during that time, we got to know each other better. It was probably difficult for William because there are so many little details to consider with this film. It was also a very technical one because there’s so much dialogue involved and you had to get the blocking just right.

Is it true that Robert DeNiro was being considered for the part of James in the project’s early stages?

I believe so. I think Robert met with Abbas and his producer in Venice. I don’t think Robert knew the kind of following that Abbas had at the time. But I really don’t know what the discussion was like between them because I wasn’t there. Obviously nothing really came of it.

How much freedom did you have on set in terms of improv? There are some long takes in this film.

Everything was very scripted. The frame was controlled in a way where it almost became an artform. Abbas has a background in photography, so when he visualizes a scene, it comes out of his eyes rather than his head. It wasn’t so much about capturing the feeling of a certain scene; it was much more about how he imagined the frame to look. After that, he would let things unfold in the moment. He was very keen on controlling what happened in-between shots as well. When he cut from one scene to another, he really made the point of getting the pace just right. We often took multiple takes because I would walk too fast from one room to the next, for example. He was picky when it came to those kinds of details. I think, for him, those details either make or break a movie.

During the café scene, I remember losing control during a particular take. I laughed and cried at the same time, which really surprised Abbas. He stood up and said, “Let me think about this.” He went outside to ponder and then came back to say, “Well, you go ahead. Your intuitions seem faster than a man’s.” [Laughs] “You already know when the next train is coming.” But during the editing, he didn’t use that take and took a different one. That was interesting to me because we’d had several arguments about it. He asked me, “If you were the editor, which take would you use?” and I told him, “The one that I like!” [Laughs] Then I told him, “Look, you’re the director. Choose whatever you want because I’m not going to tell you what to do.”

All in all, I would say there was very little improv, but there were moments in the film like when I’m driving where you bump into things you don’t expect.

Are you referring to the old lady crossing the street?

Yeah. [Laughs] That was my natural reaction to honk at her.

It must be exhausting for an actor when directors ask for long takes because you’re forced to stay in character for so long and keep this momentum going.

Being so still and tight in a frame for ten minutes can be quite difficult. There were definitely takes in this film where I felt like I was on a rollercoaster ride. This was a totally unique experience for me acting-wise in that sense. After a certain take, I would be like, “Wow. I’ve seen some landscapes that I’d never seen before.” [Laughs]

There’s this constant pull-and-tug happening concerning the idea of female emotion vs. male logic. Did you discuss Apollo and Dionysus with Abbas?

No, but Abbas actually identifies more with the female character. He raised his children on his own because when a couple gets divorced in Iran it’s the man who takes care of the kids. In that sense, I never felt like he was on the other side of the river, you know what I mean? At the same time, Abbas admits that men have a tendency to protect themselves with logic whereas women take the risk of exposing themselves. Women take the risk of being more vulnerable and needy.

Your character seems much more emotionally unstable and erratic, but, at the same time, she probably sleeps better at night knowing that she embraces life in ways that James can’t because of his world-weary attitude.

I can’t resolve that for you because I don’t know for sure. [Laughs]

What do you make of the film’s core discussion regarding a copy vs. an original and the purity of one over the other?

I think this theme of copy vs. original is a pretext in which to pit these two characters together. Of course, this theme is probably attractive for a director as well since it deals with the idea of fiction vs. reality in a way. For me, as an actress, I prefer the word “recreating” as opposed to “copy” because when I do multiple takes for a given shot, I don’t know whether I’m copying the first take, the second take or the seventh take. It’s a dilemma. Calligraphy is a good parallel because it’s basically the same process of repetition, but with a more significant and meaningful destination. With calligraphy, you’re trying to obtain chi with continued repetition.

Sorry to digress here, but there was a Spielberg film that you supposedly passed on. I think it was the original Jurassic Park. It was interesting to read that because a lot of actors don’t like to talk about things like that usually. Would you ever want to work with him in the future?

Yes, I would love to! But I’ll say this: Spielberg seems much more interested in creating a world for men. He doesn’t seem very interested in female characters. He’s not a feminine director whereas Abbas is a completely feminine director. I think Spielberg is drawn more to action and catering to male audiences. Abbas likes to explore female characters for whatever reason.

Having had such a long and fruitful career in the industry, do you constantly feel like you have to reinvent yourself and explore unexpected roles?

The idea is not to repeat yourself, certainly. At the same time, acting has a lot to do with philosophy for me. I like asking big questions. I like staying in a constant state of wondering, “Why do we do the things we do? Why do we live life the way we do?” These are the kinds of questions that I’m attracted to.

You’ve stated before that working with Hou Hsiao-hsien on The Flight of the Red Balloon changed you as an actress. Could you expand on that?

I do believe that working with Hou Hsiao-hsien changed my life. Offering the freedom and responsibility to an actor to direct, write and edit is huge. I found it so generous. When you get into a scene with Hou, you’re just going off descriptions and you don’t have any dialogue. When you’re given this kind of freedom, it’s breathtaking because you can do anything. I felt like Hou gave me that chance.

What was it like reuniting with Abbas for Certified Copy?

You’re referring to Shirin in terms of our first collaboration?

Well, I shot that in like fifteen minutes. It felt like a wink, really. I couldn’t really consider that making a film together. When Abbas asked me to come to Iran and do that, I told him, “I’ll do it because it’ll be an experience.” He totally let me be free! I really didn’t know what he wanted because I couldn’t hear any film and it was just complete silence. So, he just asked me to go through a bunch of different emotions—and I did. I laughed, cried and did whatever else came to me at the moment. When Abbas saw the footage, he was like, “Shit. I can’t use this because it doesn’t fit the film!” [Laughs] “I wish I’d seen you do this before because I would’ve chosen a different film to make.” But, you know, it didn’t turn out that way.

What’s next for you?

I just shot a film with this young Polish director by the name of Malgorzata Szumowska. It’s her fourth film and we shot it in Paris. I think she’s very talented. I’m very happy to have discovered her and to have brought her to France.