The writer and all-around sexed up blogger behind Slutever on squatting, fan mail and shitting on people, naturally. 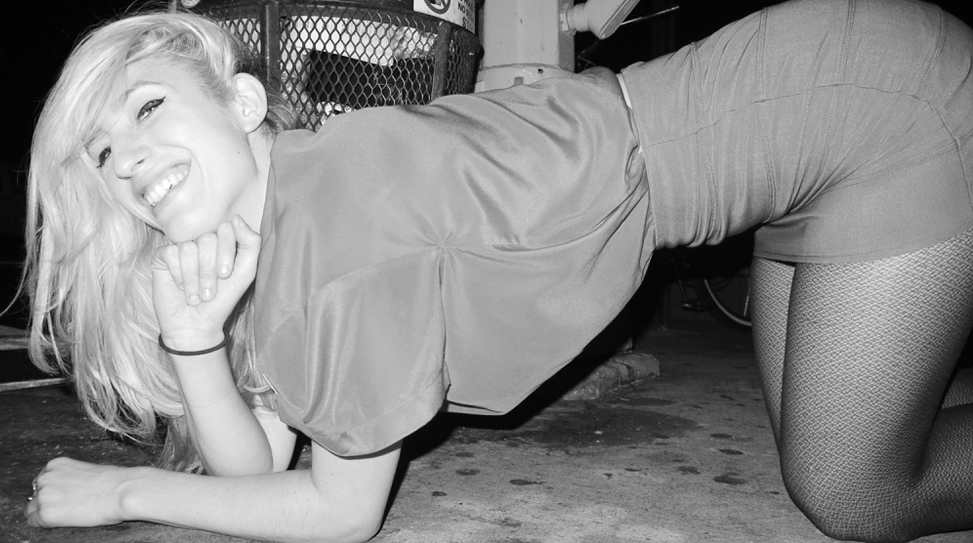 Our good friends over at VICE magazine recently invited us to a screening of their new video series that harps on the success of Karley Sciortino’s blog, Slutever, featuring Karley herself at the Westway in New York. We honestly weren’t familiar with her blog and didn’t quite know what to expect going in, but Karley’s uninhibited, spunky attitude won us over right away. A regular contributor to Dazed & Confused, Purple and VICE, the web phenom answered some of our questions via email to address her origins and why she prefers to piss rather than shit on someone.

What were you setting out to do exactly when you created Slutever?

When I created the blog in 2007, I was living in a squatted, disused hostel in south London with twelve other people, all in our early 20s. It was the sort of house where it wasn’t out of the ordinary to come home to a living room full of naked people on DMT having ritualistic sex, or a homeless Romanian family baking bread in the kitchen. Literally, both of those things happened. So I started writing the blog, intending mainly to create a written record of all the weird and extreme things that went on in the house. At the beginning the only people who read it were the people I lived with. I never intended it to be as big as it is now. Super weird!

How has the blog evolved over the years? How would you describe your core fan base, then and now?

Well, over time I’ve grown up a bit, become less ketamine-centric, and started to focus on interviewing other people about their lives, sex lives and fetishes. So basically, the blog isn’t just about me anymore. Currently, I like to think of Slutever as an investigation into sexual behavior. My goal is to create a place where myself and others can talk about sex—our sexual desires, experiences and fantasies—very openly and honestly, and in turn, help ourselves and others to better understand our sexualities. Sex is really weird and complicated, and deep down, we’re all equally disgusting. We might as well embrace it!

Do a lot of people, be it fans or naysayers, try to provoke you all the time because, if nothing else, you’re open-minded and progressive in a way that might make them uncomfortable?

What you find normal might be shocking to a lot of people. Is there perhaps something that you’re terrified of that a lot of people out there might feel indifferently about?

Is it ever a struggle to confound expectations or is that something you never have to manually steer? With so much attention you’re getting now, does it ever worry you that you’re not being provocative enough?

I try not to think about it too much to be honest. I find that when I over think things it kills the magic, ya know?

You wrote for VICE prior to Slutever becoming a part of their programming, right? How did you get involved in the first place?

Yeah, I was an intern at the Vice UK office in 2008. I was asked to come in and help out the guy in charge of the Vice blog because the editor there thought Slutever was funny. I’ve been a regular contributor ever since.

What do you make of this partnership between Vice and yourself? Is it a very symbiotic relationship?

I think so. My main goal with the Vice show is to create the visual version of Slutever and to bring more readers to my blog. And if I had to guess, I’d say that I’m introducing some of of my tween girl fanbase to Vice, too. So, it’s a plus on both sides.

Tell us about this band you’re supposedly in.

I was in a band called Indie Boys Don’t Get Boners for a couple of years back in like 2008, maybe? We had a song called “You’re Gay, It’s OK, I’ll Fuck You Anyway”. We were kind of horrible, but in a good way.

I’m sure you could care less whether someone visits your blog to read your posts or just to look at your boobs, but how important is it that there’s a pretty face behind Slutever, especially nowadays with your video projects and all?

We live in a world where image is important, so I suppose not looking gross can’t hurt your cause. And I get a kick out of exploiting my body, so I don’t mind if some people come just for the boobs. But I don’t want the boobs to ever override the content. At heart, Slutever is about the writing.

When you’re in a relationship, does that greatly influence what you’re willing and not willing to explore with Slutever?

Well, I’m lucky enough to have a boyfriend who couldn’t care less about what I write about as long as when I write about him, I make him sound like “a benevolent scholar”. That was his only Slutever requirement.